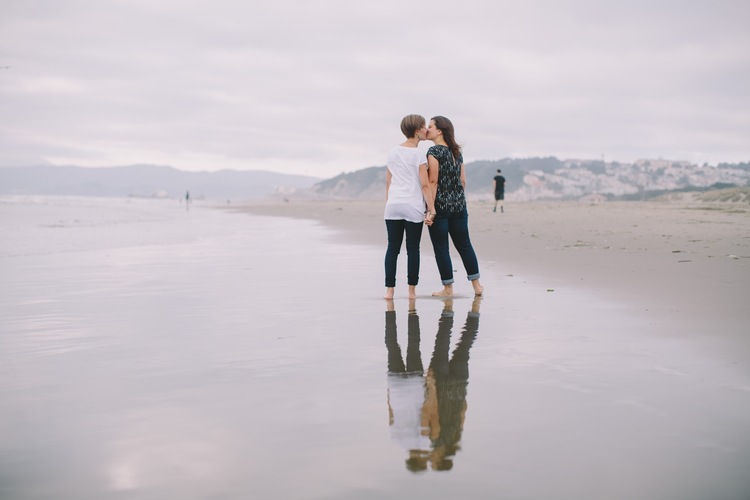 The best part of a proposal are all the personal touches, and this engagement on the sandy shores of San Francisco is full of sentimental nods to Mckenzie and Tori’s relationship. Returning to the city they fell in love in, Mckenzie surprised Tori with a trip to the coast, and Flytographer Danielle was there to capture the surprise of a lifetime – the beginning of a special new chapter in their lives together!

“Tori and I met for the first time in March of 2012 at a monthly queer women’s dance party in Washington, DC called She.Rex. We connected over music (she’s a bass player and I’m a singer), and had an amazing time playing together in a rock band for the next year and a half before finally starting to date. Once we got together, we talked a lot about the future -marriage, kids, where we might live – but we always skipped over the getting engaged part. I decided it was time to act, so I got some advice from Tori’s sister and brother-in-law, and got to planning!

“Shortly after Tori and I had started dating, we went on a trip to San Francisco. It was there that I remember really falling hard for Tori and found out later that she had felt the same way. Because this place was so special to us, I knew I had to do the proposal there, but how would I get her there, especially without it becoming suspicious? Well, luckily enough, a month or so prior to my planning, Tori and I had booked flights to Oregon to visit my family in late August. This was the solution: I could change the flights to fly into San Francisco instead, and she would not have to know! I barely told anyone that the proposal was coming, so it would be a surprise. The day of the flight to ‘Oregon’ came, and I was out-of-my-mind nervous. I thought I had it well-planned down to the last detail, so all I could do was go with it. I was able to get her all the way to Oakland without any suspicion. When we got there I was like, ‘So we’re not actually changing planes here; we’re staying here in San Fran for the day!’

“We had a lovely day in San Francisco, where we had a scrumptious lunch at one of the best taco places in town, shopped around the Mission District, and relaxed in the sun at Dolores Park. Later that evening, we hopped in an Uber to head to ‘dinner,’ and she had no idea where we were going. The driver took us through Golden Gate Park, which was so lovely. As we exited the park, we came upon Ocean Beach. When Tori figured out where we were, that was the first time she got suspicious about what was happening. We walked around on the beach collecting rocks and shells for a bit while the two of us were trying not to act super nervous.


“Our photographer Danielle was on the beach with us catching candids, and Tori had no idea she was there; she looked like she was just out there on her own capturing the sunset. Danielle’s cue to know I was about to propose was when Tori and I compared our seashell findings. This was the only trip-up! There were basically no shells on the beach that day. Tori thought it was pretty weird that I was so insistent on finding shells when there weren’t really any to be found, but she was so nervous with hopeful anticipation that she just went with it and channeled her nerves and excitement into the task. I was so grateful for this!

“We found a few shells, and we stopped on the beach to compare them and pick our favorites. I had placed the ring under the stack of shells in my hand, so when I got to the bottom of the stack, I said, ‘Okay, I have one more,’ and I opened up my hands with the ring sitting there and asked her to marry me. She said ‘Yes!’ And Danielle captured the moment beautifully. It was perfect.

“We had our moment, and then Danielle came over and we told Tori what was going on. She was in disbelief. We had a whole engagement photoshoot right after the proposal had occurred. Danielle was so amazing at calming us down and making us not look completely weird (because of course we were feeling super giddy and ridiculous at this point). After the shoot, Tori and I went to the most delicious sushi dinner and just soaked up the loveliness of it all together.


“The next morning, we had a way-too-early flight to Oregon, but we made it! We then got to make the big announcement to my family in person, which was super cool, and later that week the pictures from Flytographer got to us, just in time for us to put them up on Facebook and share the experience with everyone! The pictures that Danielle took were exactly what we had wanted, and we feel so grateful to have them as a memento of this special day.” – Mckenzie

Feeling inspired for your own proposal abroad? Check out our Proposal Travel Stories for more!

Best places to take pictures in San Francisco, CaliforniaThrongs head to the City by the Bay for its vibrant cultural mix,...