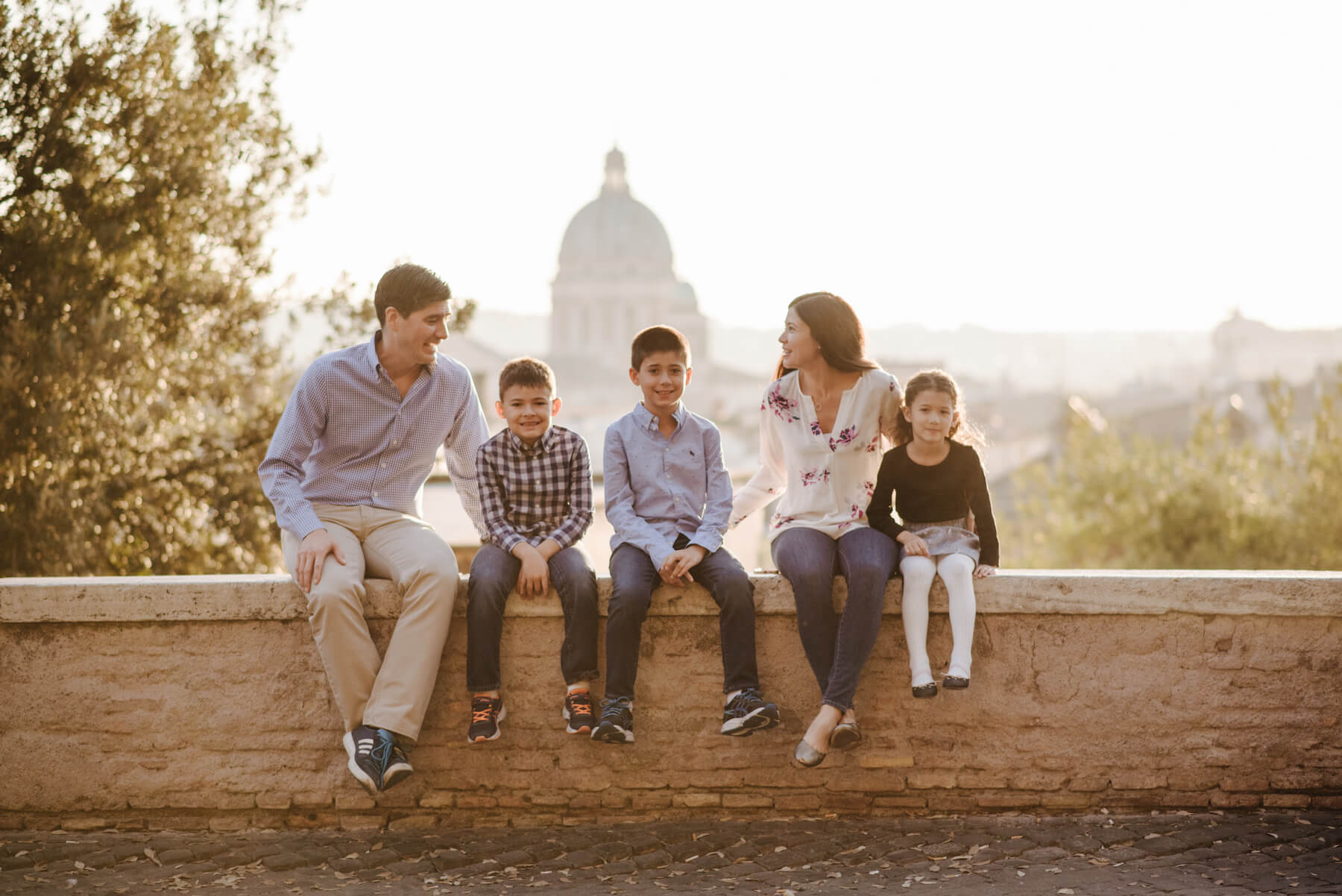 Imagine going for a city stroll and everywhere you turn, there’s a breathtaking monument and a history lesson. That’s what it’s like travelling to Rome, Italy, also known as the Eternal City.

Rome is perfect for foodies and history buffs, but it’s also an excellent spot just for family or friend vacations or a romantic getaway with your partner. 😊  There’s an abundance of places to take pictures in Rome with something beautiful and notable surrounding you no matter where you are.

If you’re planning a trip to this remarkable Italian city, we’ve got the best places to take pictures straight from our local Flytographers! 📸 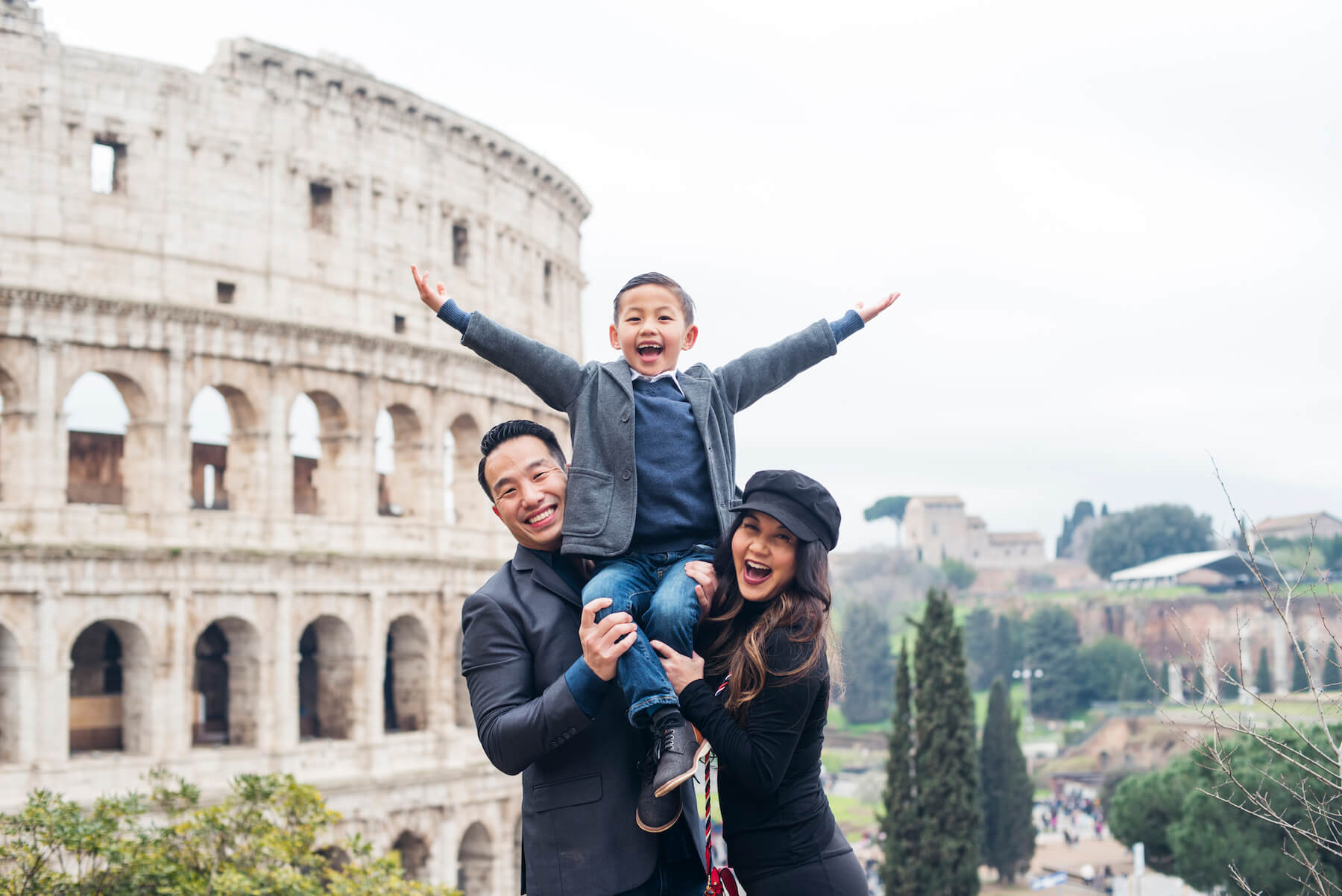 Photo: Francesca V. in Rome for Flytographer. Suzanne and their family capture memories in Rome with a family photoshoot.

Once upon a time, the Roman Forum was used to host important political, religious, and social events; now it is a favourite spot for tourists and locals to visit. 💖  These ruins will take you back in time with the majestic columns and preserved stonework — they are a dazzling backdrop for your photos. This our most booked route for a reason!

Just east of the Roman Forum is the largest amphitheatre 🏟  ever built, the Colosseum. When you enter this mesmerizing monument, you can imagine the echoes of the hollering crowd as they watched gruesome gladiator fights and other forms of entertainment that occurred there.

The fall of the Western Roman Empire brought the deterioration of the Colosseum. Still, like the Roman Forum, these ruins are perfect for photography and one of the most Instagrammable places you’ll see. 🙌🏼 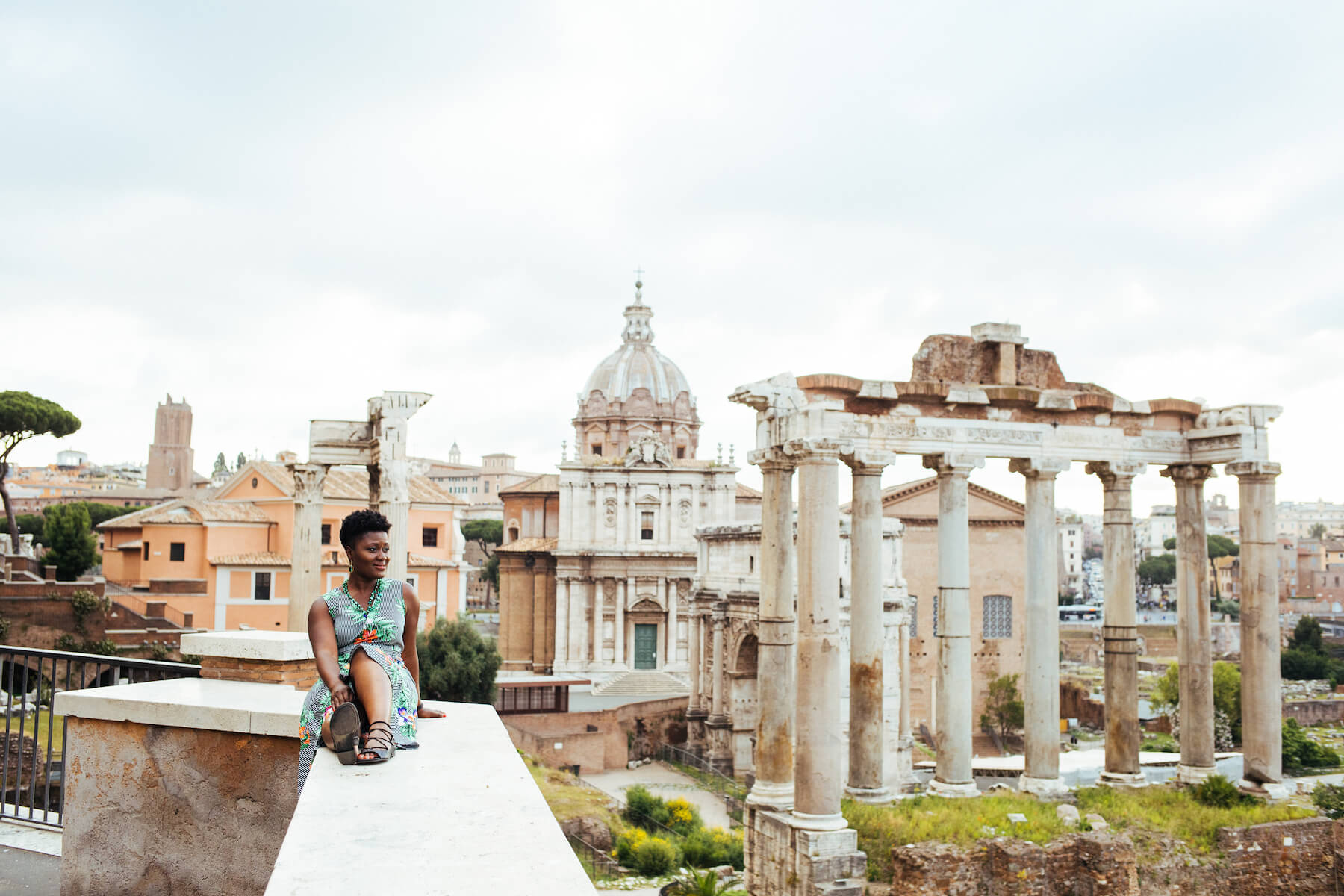 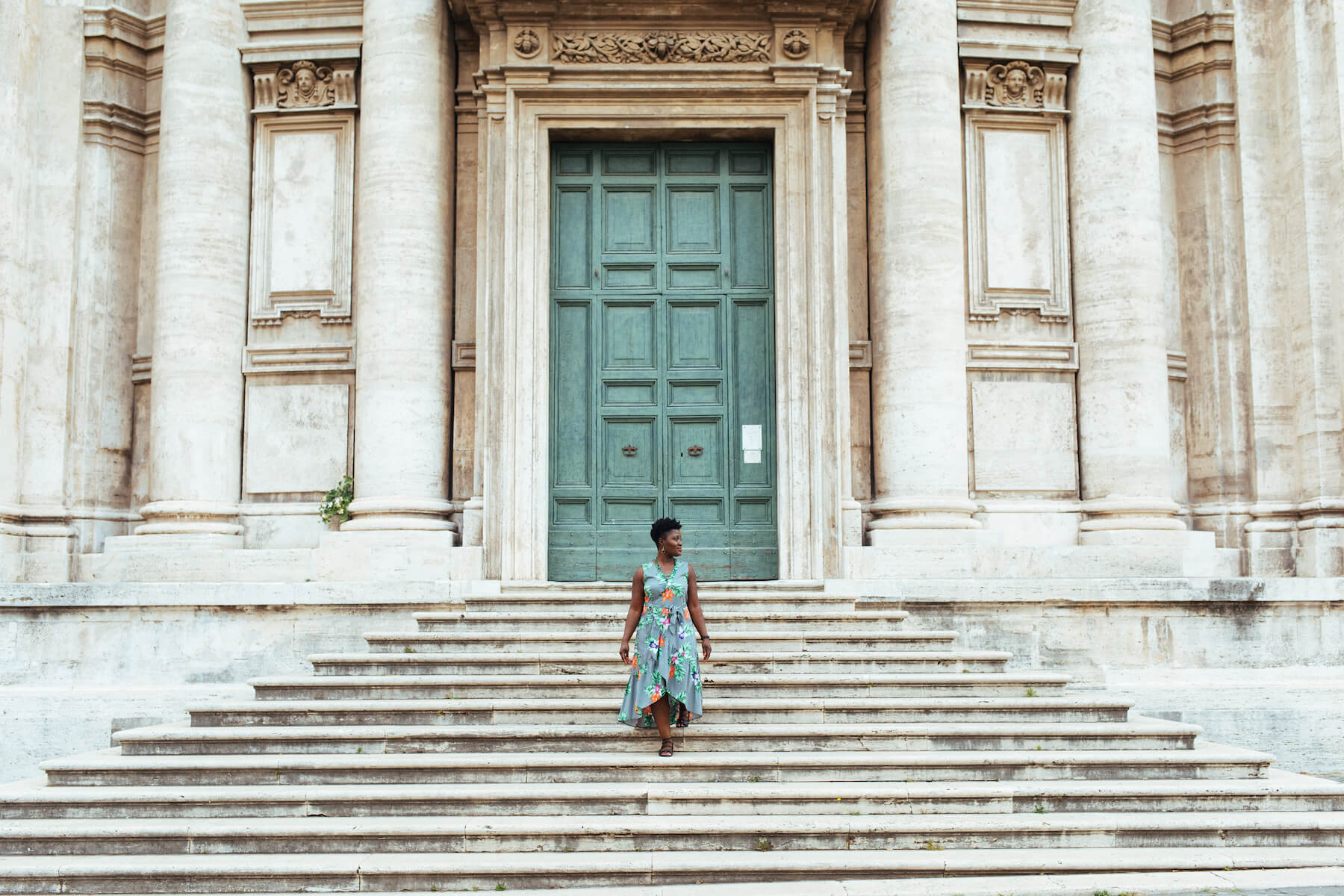 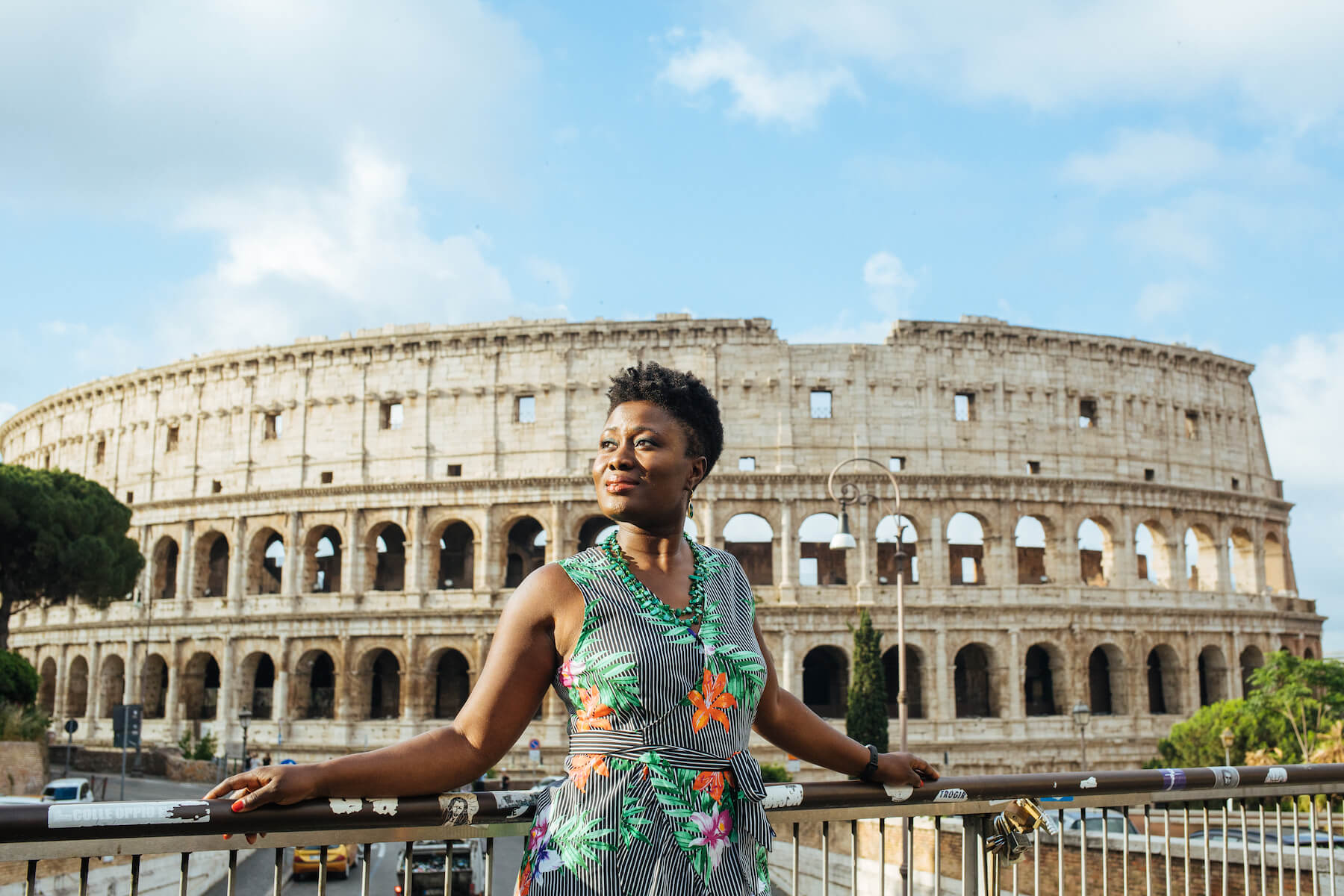 Photo: Guido in Rome for Flytographer. Doreen has a Modern Headshot photoshoot in Rome.

Experience the roots of Classic Rome with a day trip to the Pantheon, 🏛  the most preserved building of ancient Rome believed to have been constructed as a temple to honour the Roman gods.

The Pantheon was eventually converted into a Christian church and also became the burial place of the painter Raphael 🎨  and other prominent Renaissance figures, including monarchs. Today, it is destination that should be on every traveller’s Rome itinerary.

Whether it’s day or night, the Pantheon will look stunning in photos with its Corinthian columns and dome. Night is extra-special as the temple lights up and offers a beautiful backdrop for a photoshoot. ✨ 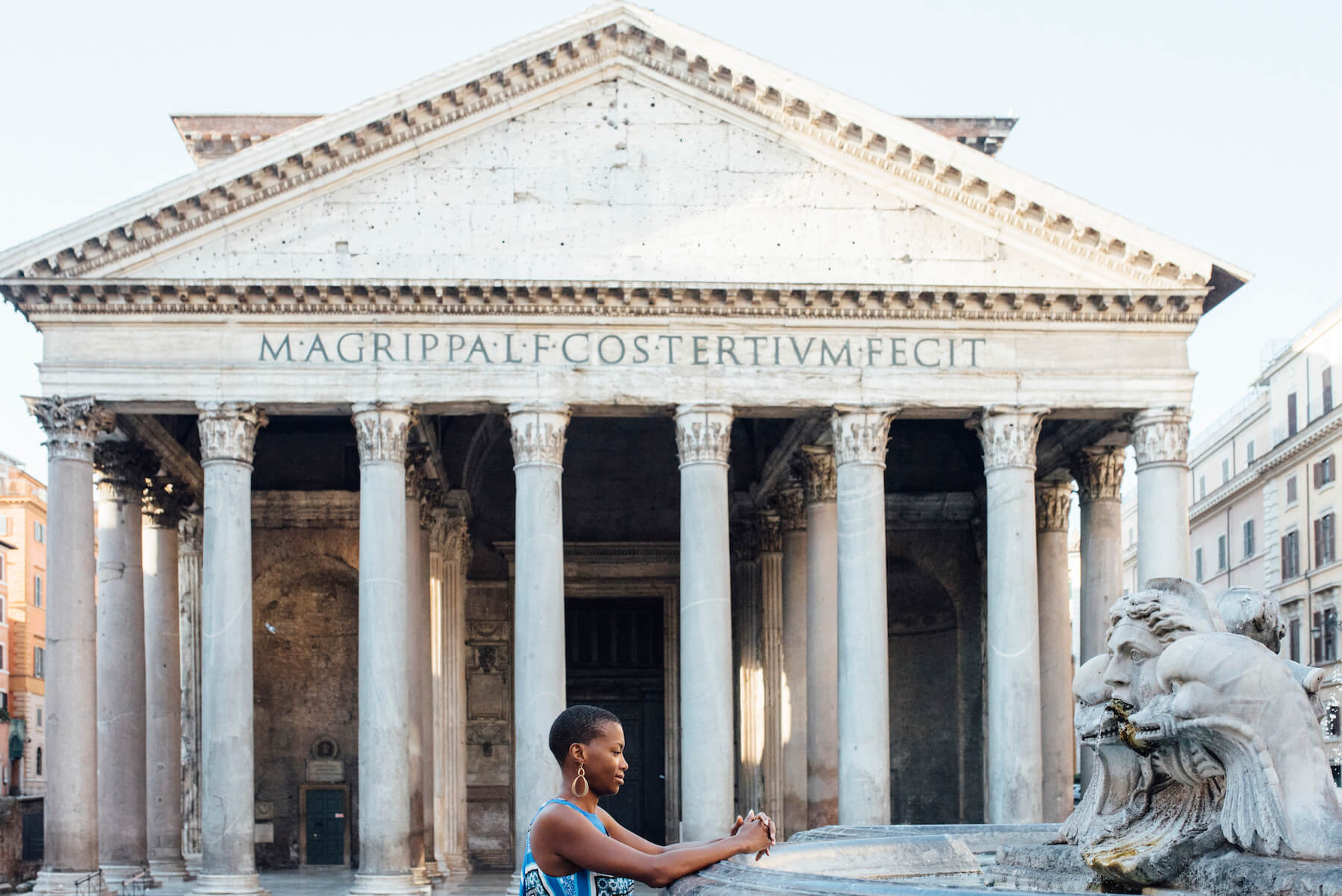 Photo: Roberta in Rome for Flytographer. Nioke has a Modern Headshot photoshoot in Rome.

The Vatican City is an independent city-state located inside Rome. It’s home to the Pope and full of museums and churches, such as Vatican Museum and the Sistine Chapel, that hold iconic art and architecture. 🖌

One popular place to visit and take photos while in the Vatican City is St. Peter’s Square, a large plaza known for being one of the most beautiful squares in the world. Inside this admired piazza is St. Peter’s Basilica, which you can read about in more detail further down this list. 😉

The Vatican holds some of the most picturesque sites in Rome, so don’t miss out on capturing it all during your trip. 🤳🏾 You won’t regret it! 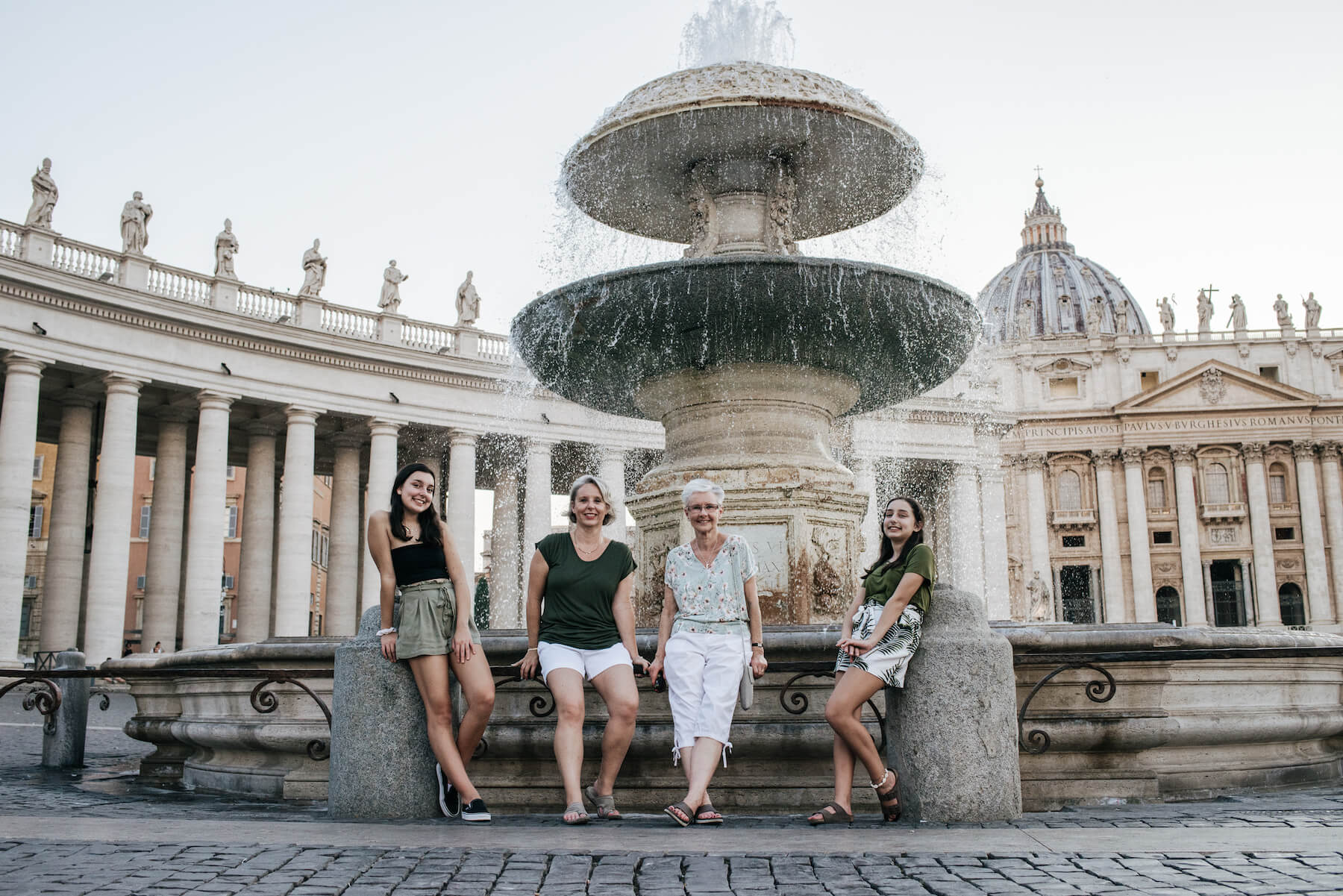 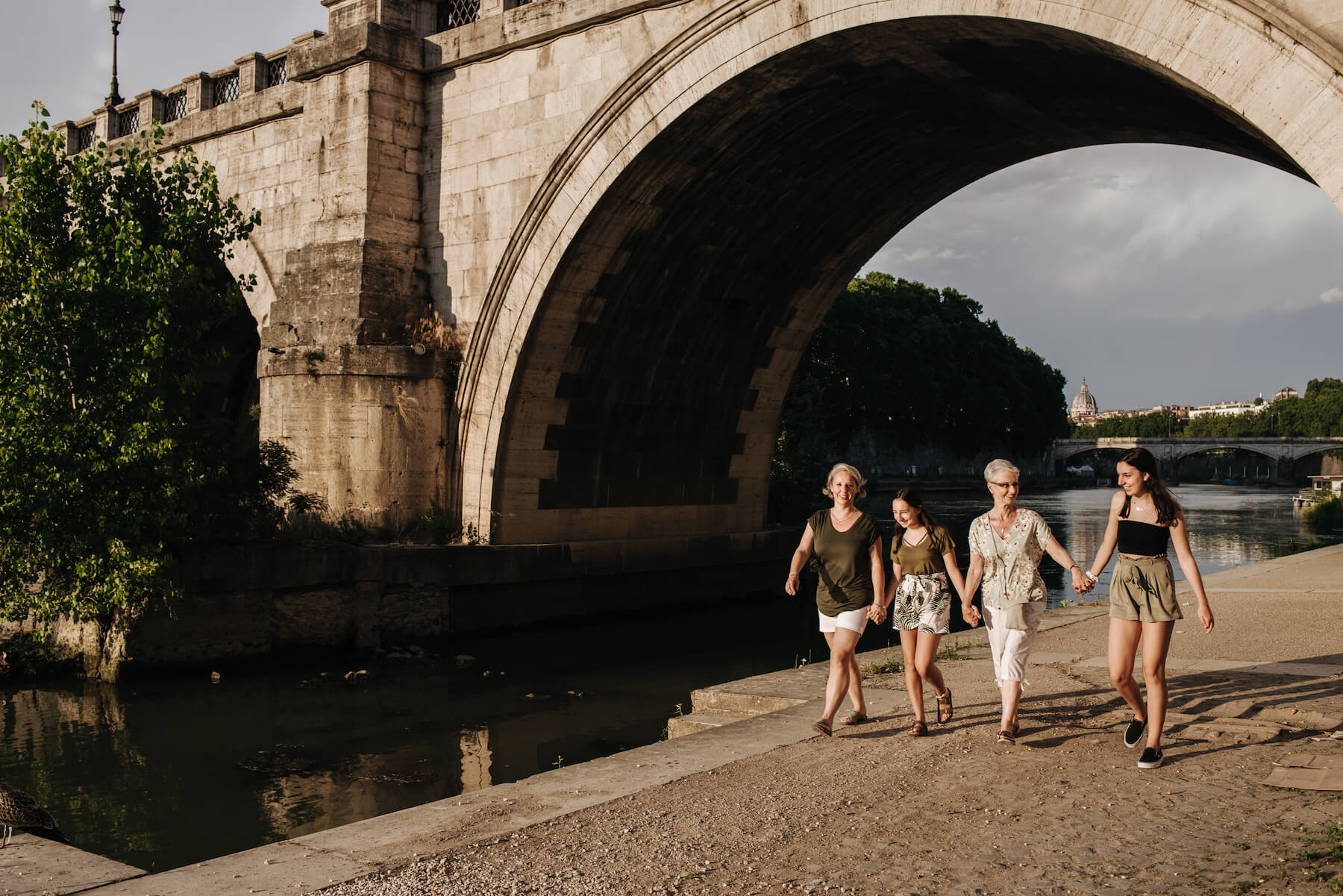 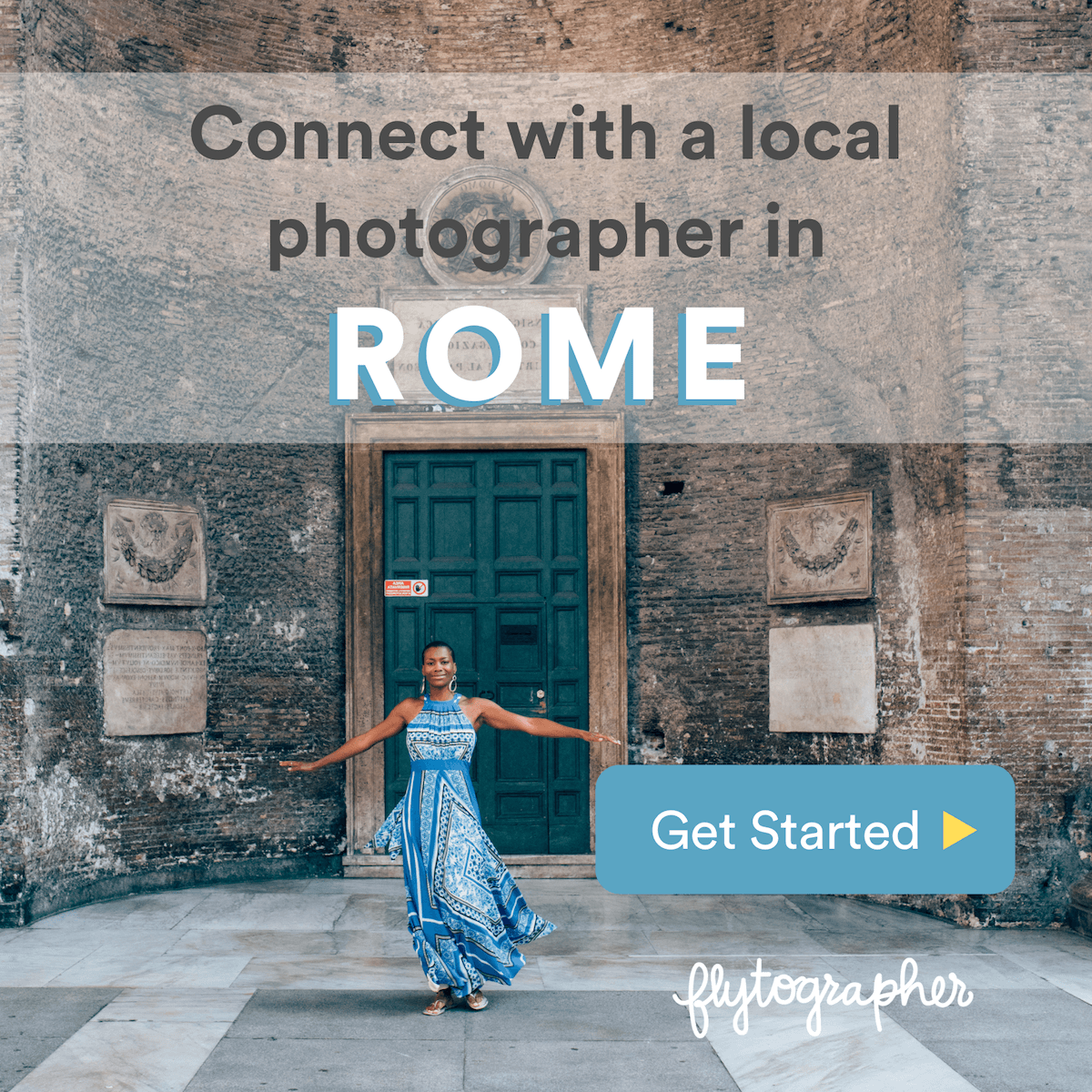 Photo: Roberta in Rome for Flytographer. Emma and their family capture memories at The Vatican with a multigenerational photoshoot.

Built in the early 18th-century, the Trevi Fountain ⛲️  is the largest Baroque fountain globally and a must-visit for any tourist. The elaborate, theatrical architecture is hard to miss and is real eye candy! 😍

It’s impossible to leave Rome without capturing a photo in front of this beautiful fountain with sculptures of the Roman gods. The Palazzo Poli, an ancient Roman palace, sits directly behind.

If the Trevi Fountainlooks familiar to you, but you’ve never been to Rome before, you’ve probably spotted it in a movie! It has made an appearance in many famous films 🎥  such as “Roman Holida” with Aubrey Hepburn, “La Dolce Vita,” and “The Lizzie McGuire Movie.” 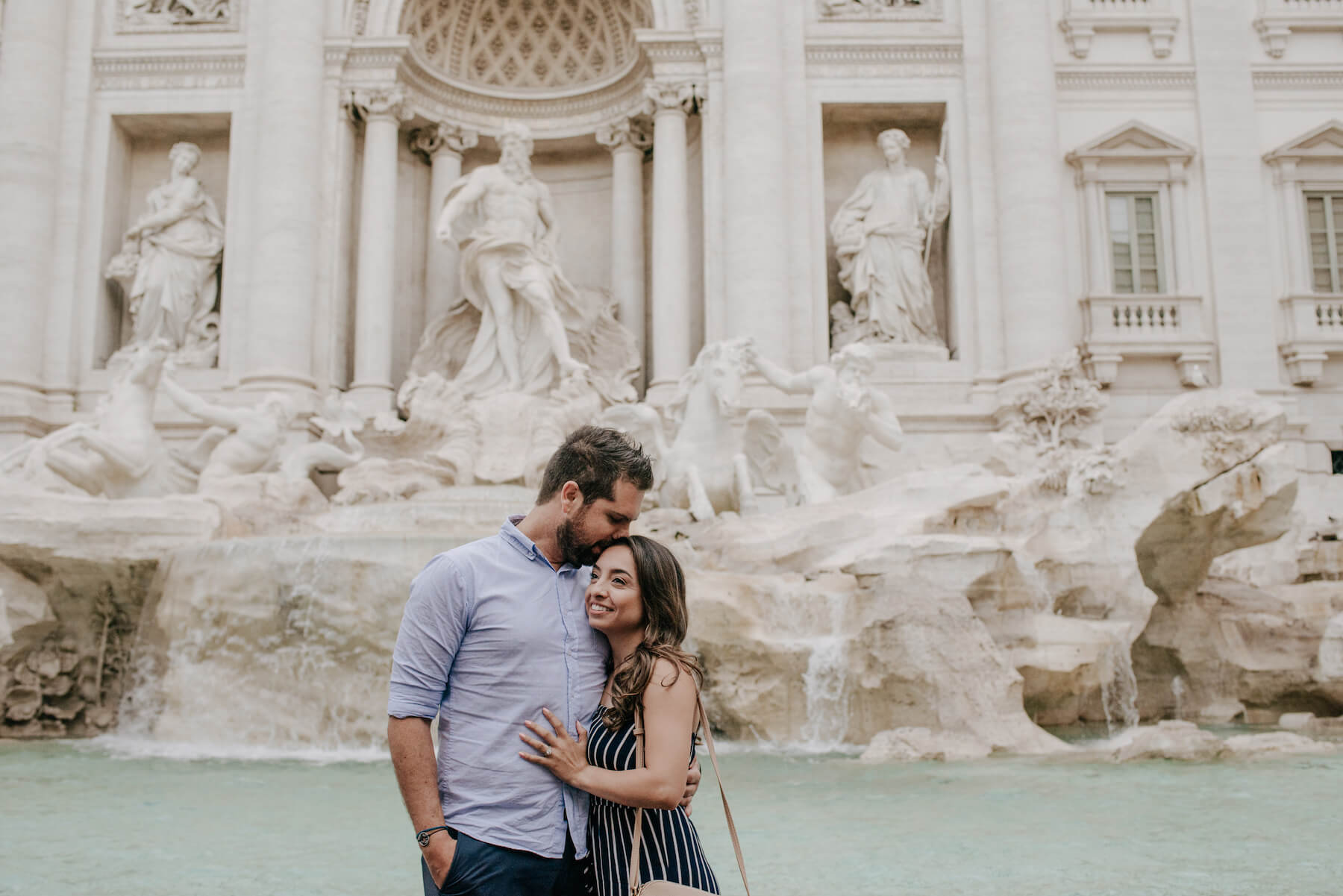 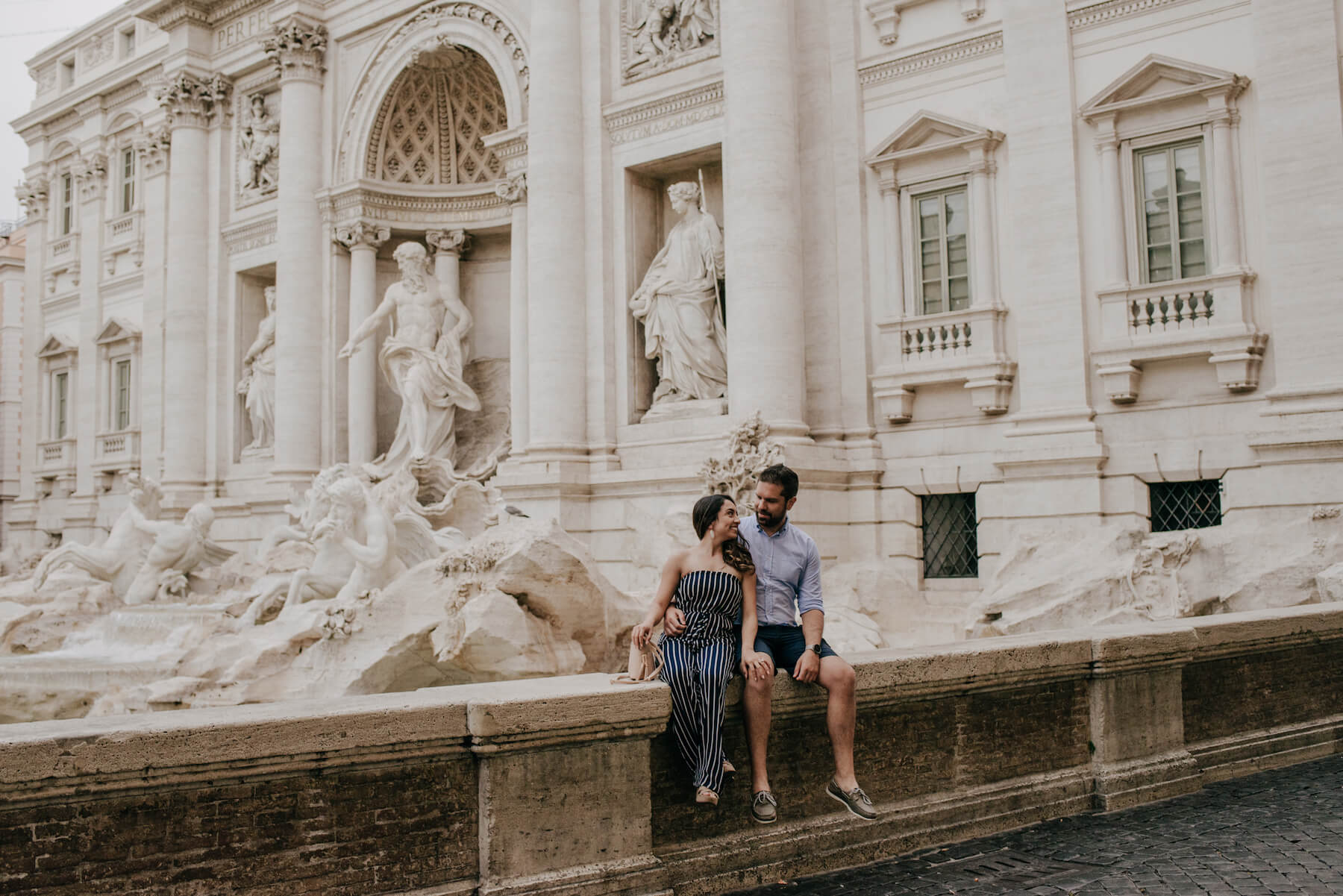 Photo: Roberta in Rome for Flytographer. Matthew and his partner celebrate their engagement in Rome with a photoshoot.

This popular engagement 💍  and couples photo spot is teeming with gorgeous locations and views.

Start at the church of Trinità dei Monti at the top of the Spanish Steps and immerse yourself in the beautiful 16th-century architecture. Afterwards, take a stroll down the gardens of Villa Borghese, 🌸  which contains not only flowers and eye-catching greenery but museums and other attractions. These gardens are right by the Pincio, where the best views of Rome are visible, making for some great photo backdrops. 📷

Come back to the Pincio in the early morning or evening for the soft light glow to go with your amazing views. 🌅 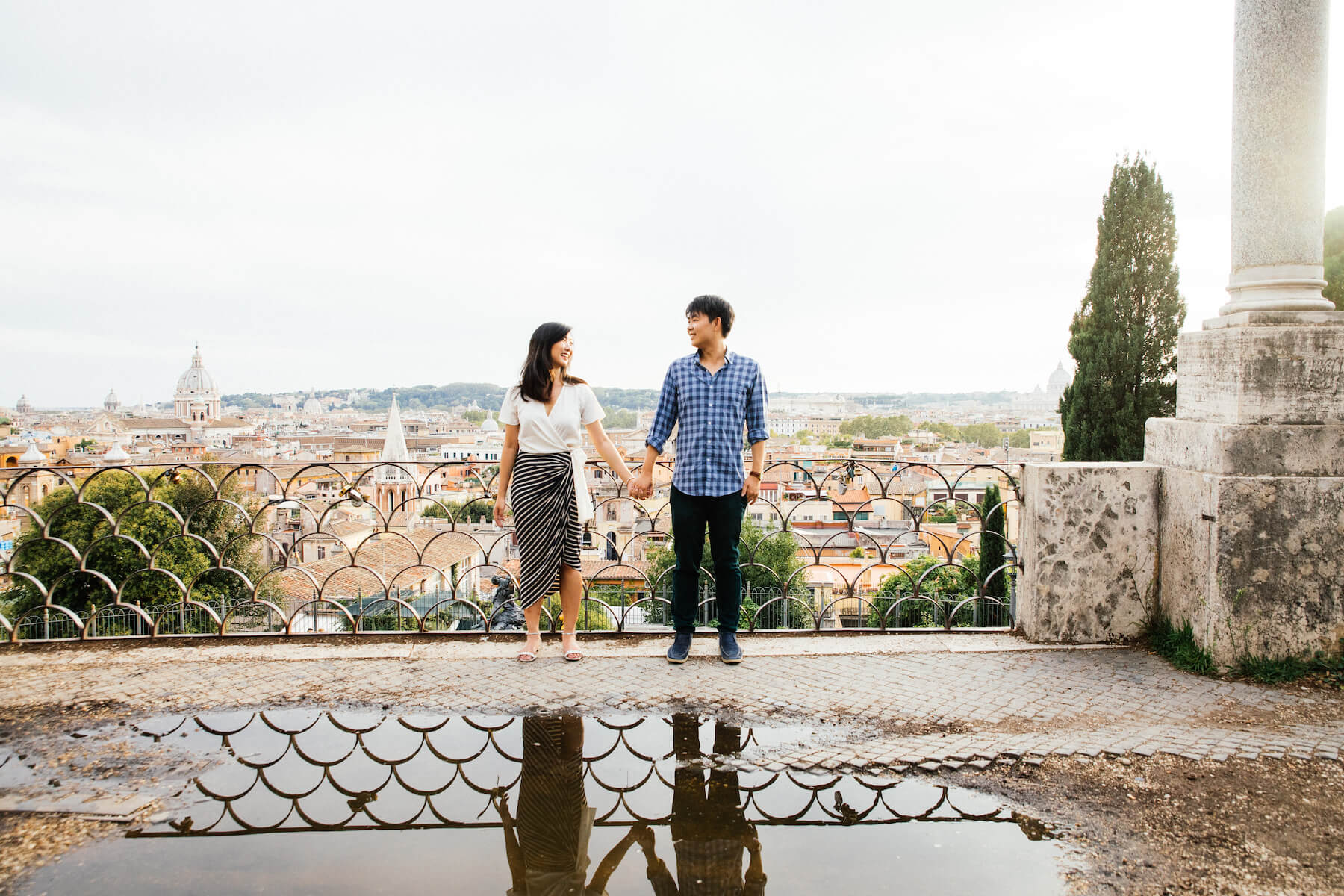 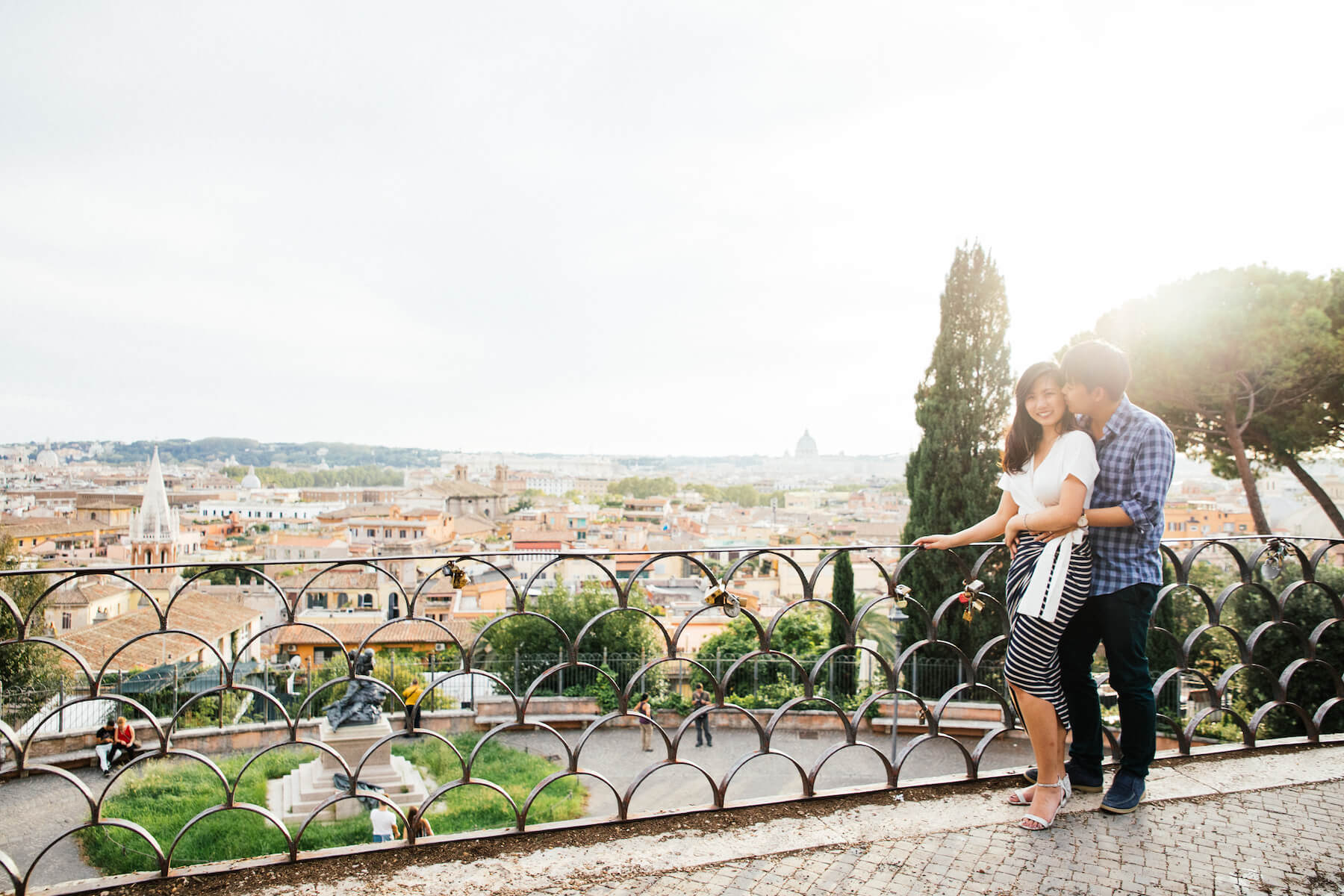 Photo: Guido in Rome for Flytographer. Debbie and their partner celebrate their anniversary with a couple photoshoot in Rome.

During the day, Trastevere is a colourful and lively neighbourhood that oozes Roman charm and Instagrammable places. At night, Trastevere is somehow even more of a photogenic site with its warm, golden lights on the cobblestone streets. 🌙

After you take some photos, enjoy the many bars 🍷 and restaurants in the area. Or even choose to stay in one of the B&Bs or hotels to take advantage of everything this trendy location has to offer.

Book an hour-long photoshoot here so you can continue along up the Gianicolo Hill for breathtaking views of the city and the famous Tiber River 🌊 that you won’t want to miss. If you feel like adventuring more, make sure to cross the bridge and explore Isola Tiberina, a tiny island in the Tiber River. 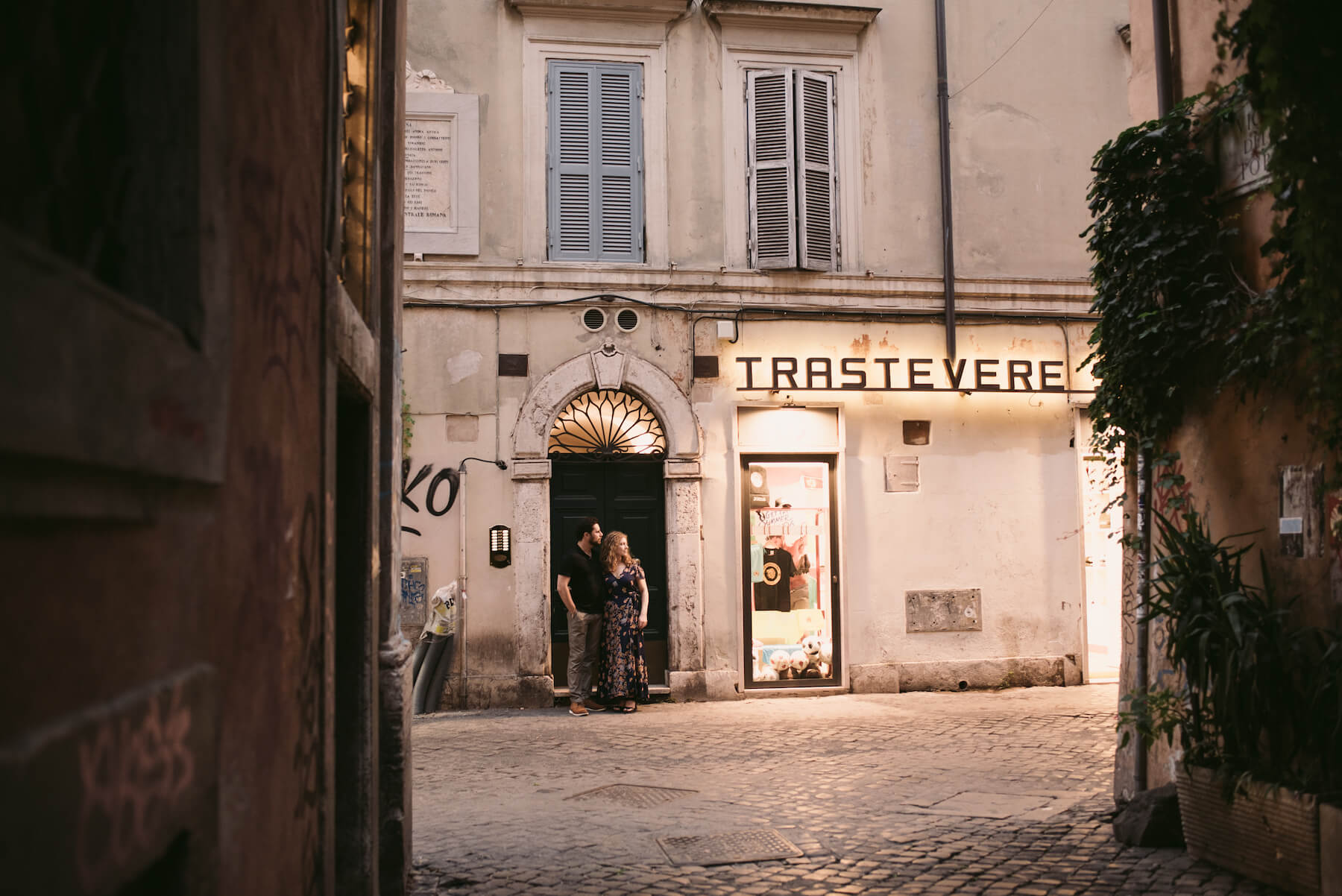 Photo: Roberta in Rome for Flytographer. Rosie and their partner capture memories in Rome with a couple photoshoot.

For a photo location with bohemian and classical elements, Monti Neighbourhood will shine in your photos. It’s a favourite among locals because of the abundance of piazzas and streets to explore while snapping photos of the striking viewpoints.

Make sure to check out all the local trattorias, which are less formal Italian restaurants, 🍽 cool bars, and vintage boutiques. You’ll feel like one of the locals since this place is a hidden gem 💎  rarely overcrowded with tourists. This makes it an even better site for a photoshoot! 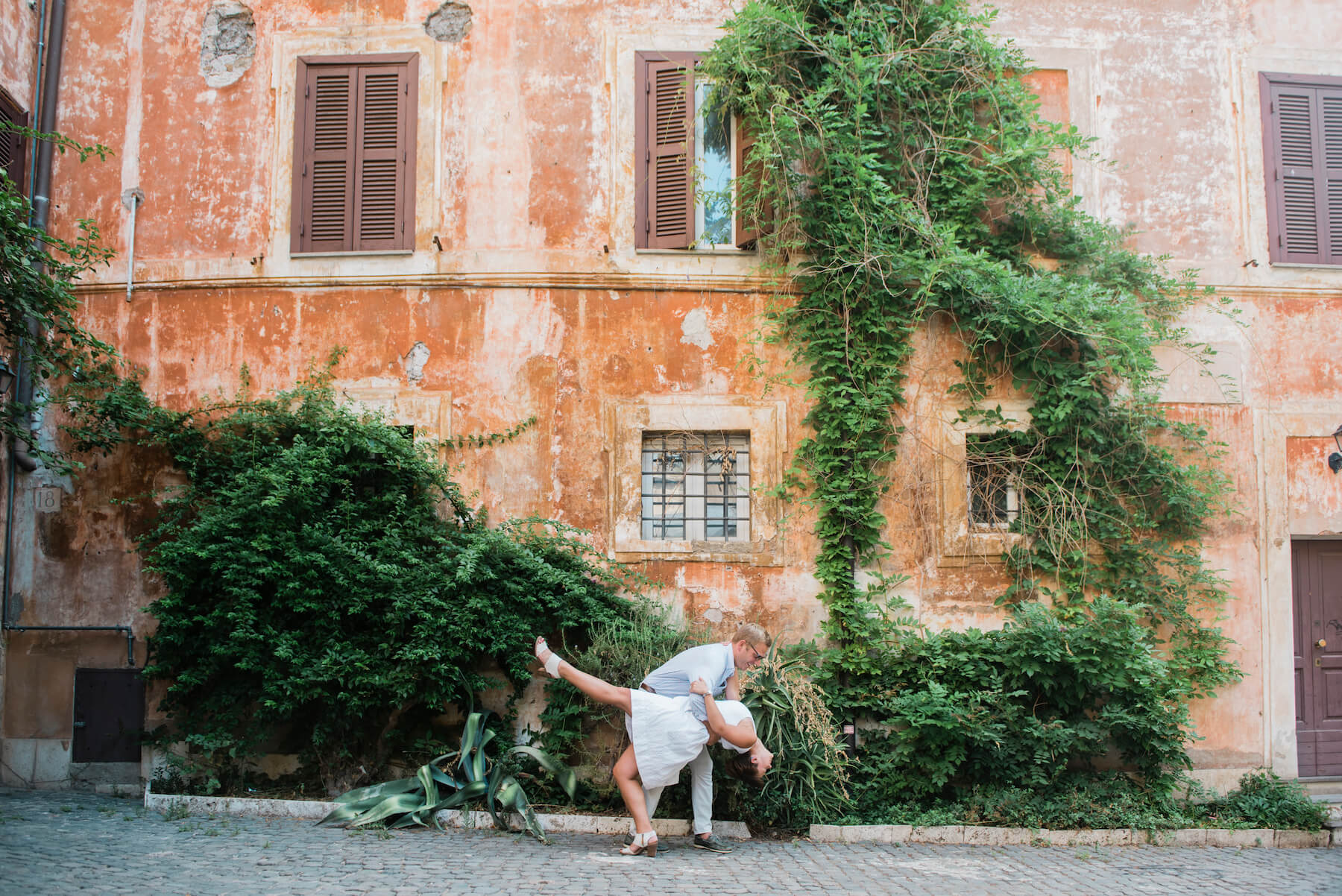 Photo: Francesco in Rome for Flytographer. Liz and their partner celebrate their anniversary with a couple photoshoot. 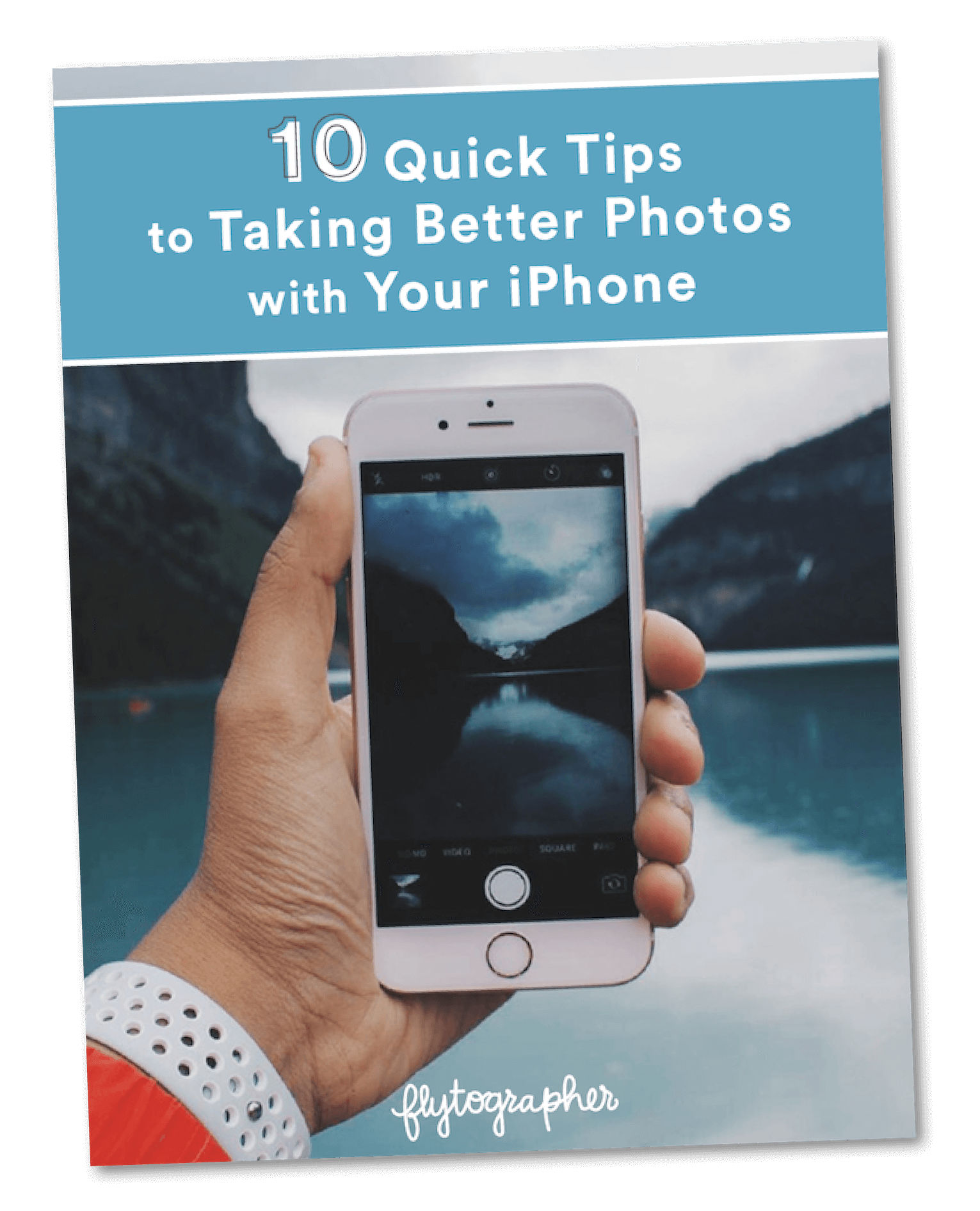 Best known as a place to enjoy Baroque architecture like Sant’Agnese in Agone, Piazza Navona is a public space that opened up all the way back in the first century. Every history buff or ancient Roman architecture enthusiast cannot leave Rome without snapping a few pics here.

The light falls perfectly on the white buildings and water at sunset, 🌇  creating an irresistible and romantic setting. This is the ideal location to bring your loved ones to wander around or take a few photos together.

This piazza is another beloved film location! Piazza Navona has been featured in famous films like “Angels & Demons” and “Catch-22.” 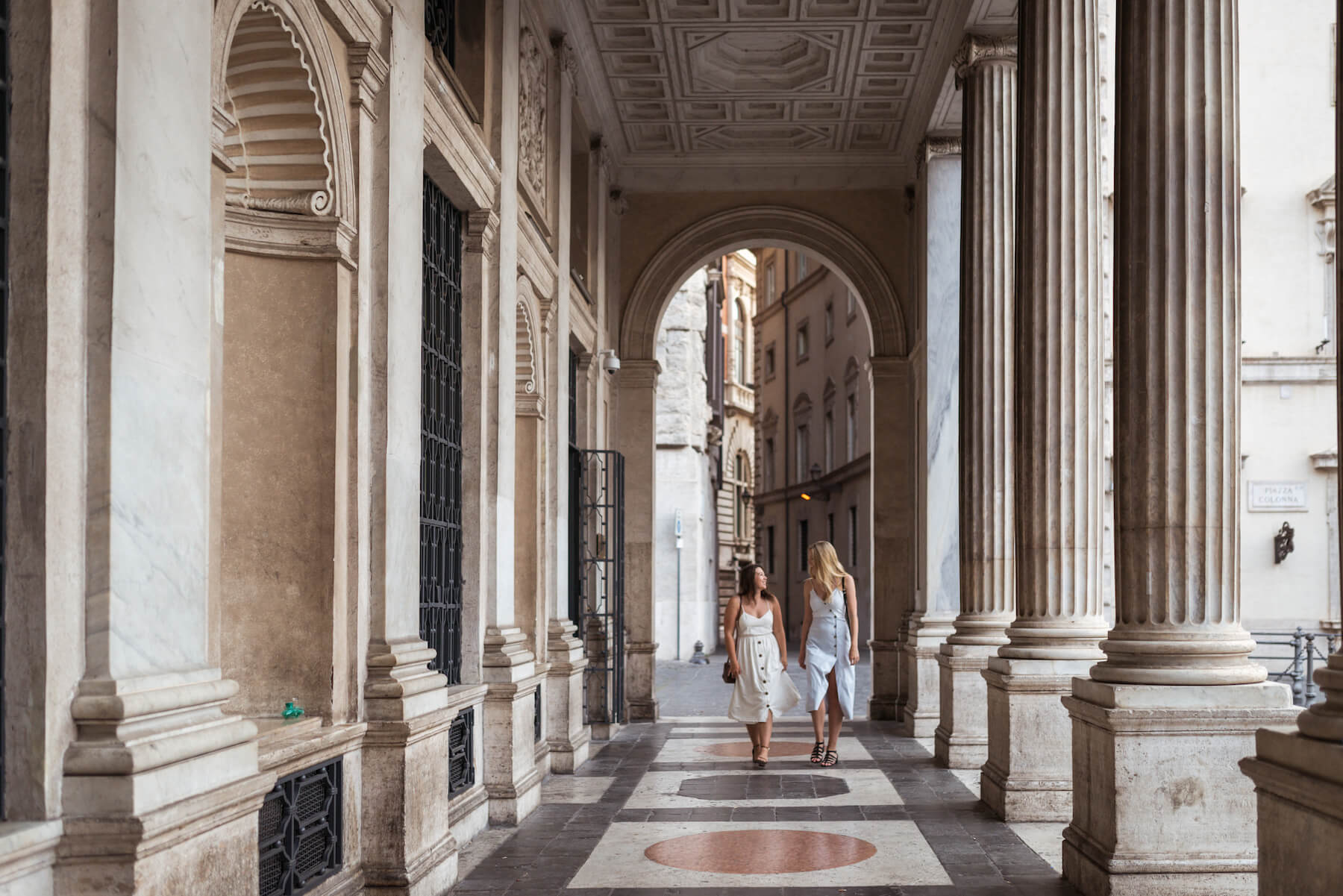 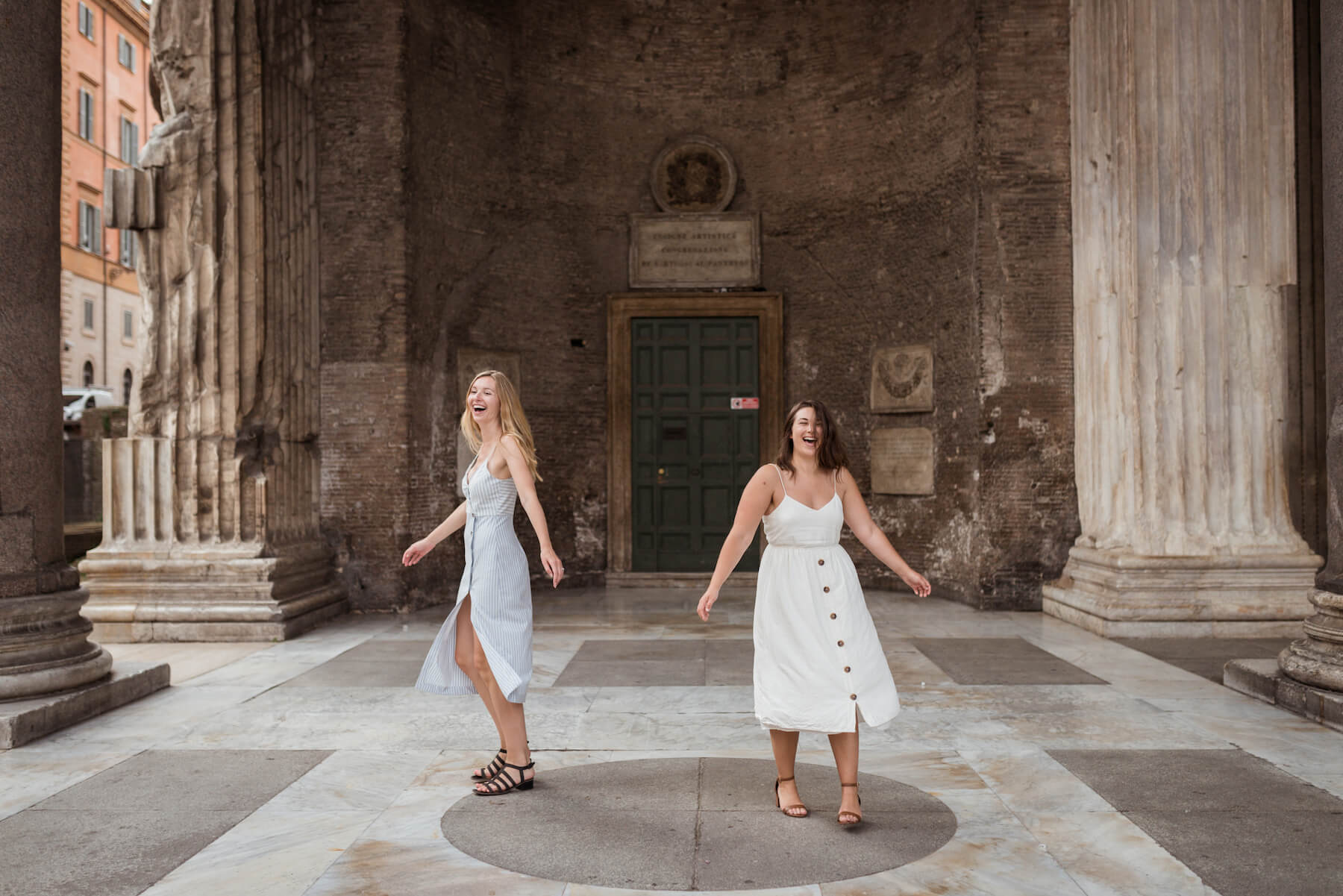 Photo: Roberta in Rome for Flytographer.  Shay and Alex capture memories on their trip to Rome with a friends photoshoot.

The Spanish Steps are a collection of 174 steps, spiral staircases, terraces, and gorgeous views of Italian architecture. They were built in the early 18th-century to connect the Bourbon Spanish Embassy and Trinità dei Monti church. ⛪️

This whole journey is only a 15-20 minute walk, but with all the culture and architecture along the way, expect it to take a little bit longer.

What better way to capture your Italian getaway than standing or sitting on these well-known steps and having a photoshoot? 😄 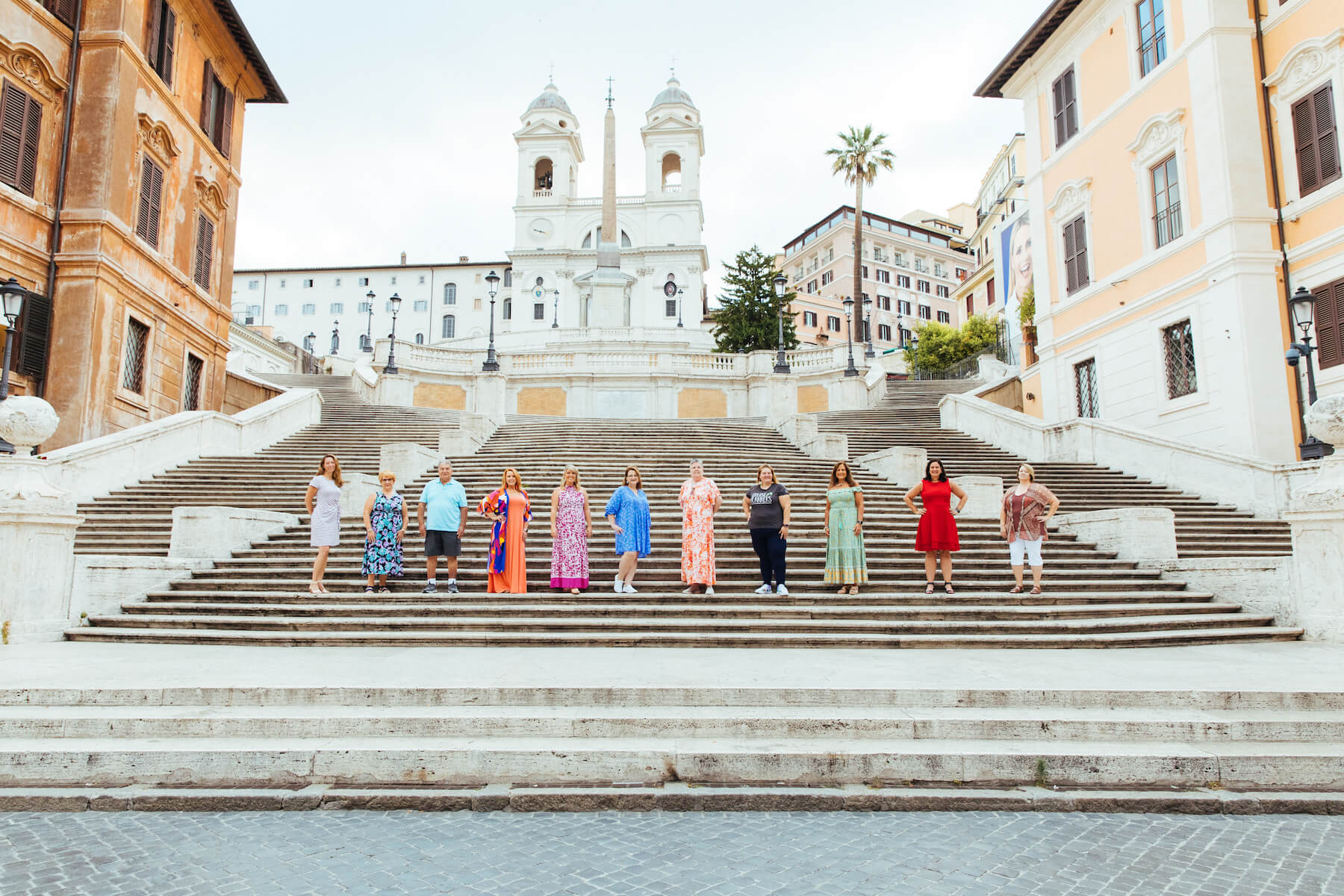 Photo: Guido in Rome for Flytographer. Emily and their friends capture memories in Rome with a friends photoshoot.

St. Peter’s Basilica is a Renaissance-style church in Vatican city most notable for its impressive and grand dome overlooking Rome, as well as its importance to Catholic worshippers. It’s no wonder this is one of the most visited attractions in this city. 💕

When you walk into St. Peter’s Basilica, your eyes will widen 😯  at the glorious sculptures carved into the stone walls and rows and rows of seats. The church is massive and every inch of it is Instagram-worthy, inside and outside. It will transport you back in time to when it was built in the 17th-century and while the beauty and magic of this church cannot be fully captured by the camera, the photos will still turn out wonderful. 💫

Photo: Roberta in Rome for Flytographer. Christine and their family capture memories in Rome with a family photoshoot.

Your trip to Rome will be so full of fantastic food and remarkable landmarks, it’ll be hard to remember everything! Let us help you capture all the heartwarming memories by booking a Flytographer for your next photoshoot. 📸 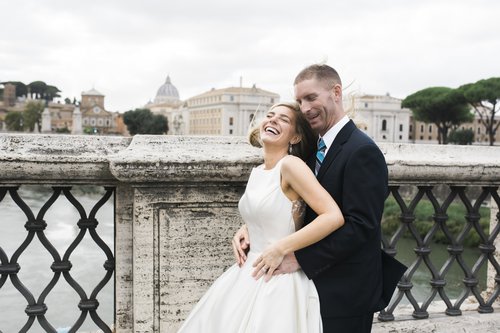 “Francesca was so kind and comfortable to work with. The photoshoot felt like a good friend had come to take our photos. She kept good communication with us to discuss the meeting place and weather conditions. She gave good directions for where to pose and the photos turned out amazing!” 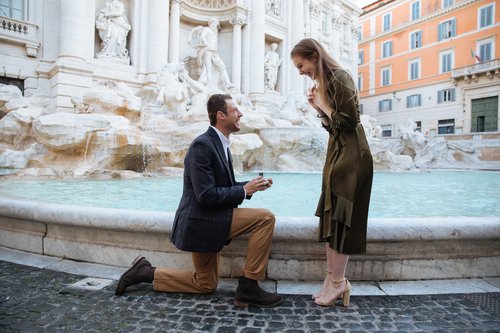 “Guido was a very genuine guy. The photos are absolutely beautiful. When my fiancé saw them for the first time she became very emotional. Additionally, he made us feel comfortable the entire time. He helped us with direction when we needed it and gave us some ideas throughout. He was also a really fun guy to talk to. We had great conversations when we were walking from place to place! This experience absolutely made the proposal.” 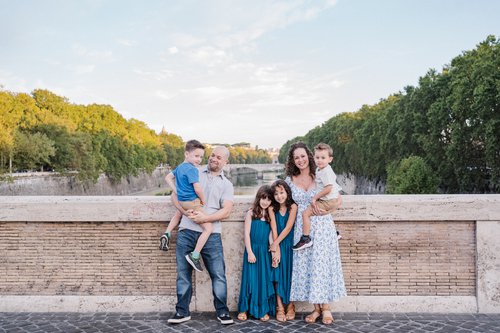 “Roberta was so easy going and made our family of six (including kids under 9) feel at ease during the shoot. She was quick to laugh and we enjoyed spending the morning with her walking around to different spots. Thank you so much, Roberta!”

Austin is one of the most Instagrammable cities around, known for its colourful street art, live music, food trucks and the...

What is a Headshot? 7 Tips for the Best Headshot Photoshoot

What is a headshot? We’ve all heard that a picture is worth a thousand words. It’s an old saying that holds...

One of the most important aspects of Flytographer is our local, on-the-ground photographers in Southern Italy and beyond....