Top 10 Cities to Propose in Europe 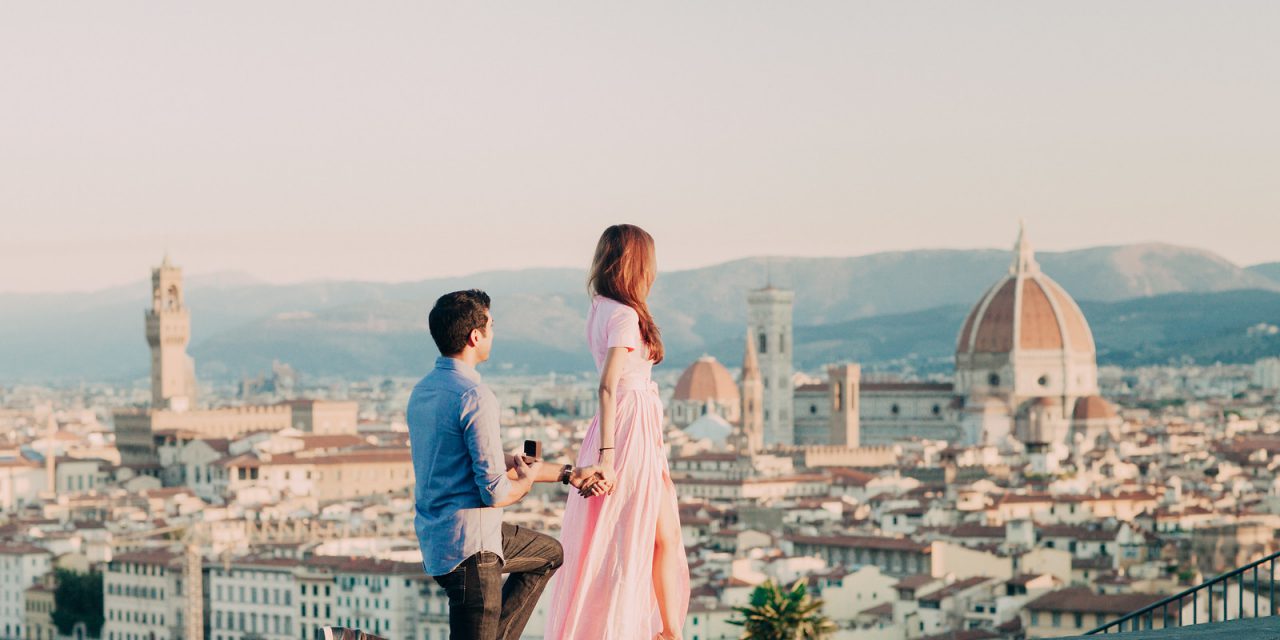 With historic cities and stunning scenery at every turn, Europe is probably the most romantic continent on this earth.

Whether you’re planning that perfect proposal moment or trying to (gently) nudge him in the right direction, you’ll find that Europe has something for every couple to bask in the bliss of a destination proposal.

Cobblestone streets and cute cafés — there’s a reason Paris is known as the city of love.

Light up your lives on the Champs Élysées during the holiday season, get artsy in front of the Louvre Pyramid, or take late night stroll through Champs-de-Mars for a quiet serenity you won’t find during the peak hours of the day.

If you’re looking for the classic and iconic Parisian proposal, the top of the Eiffel Tower will always have a spot with your name on it.

For a lesser known but up and coming engagement destination, look no further than the storied streets of Prague to backdrop your special moment.

Make the ask in front of the stunningly graffitied Lennon Wall for a pop of colour in your proposal, or get lost in history at the  14th century Charles Bridge or the 19th century Prague Castle if she can’t resist classic Czech architecture.

A mix of great food, wonderful culture, and fascinating history, it’s hard to have a bad time in London.

Take your love on a romantic adventure throughout the city to witness the stunning and staggering architecture of Big Ben, get down on one knee at the top of the world from the London Eye for an unrivaled view of Londontown, or pop the question in front of Buckingham Palace for a proposal fit for a queen. 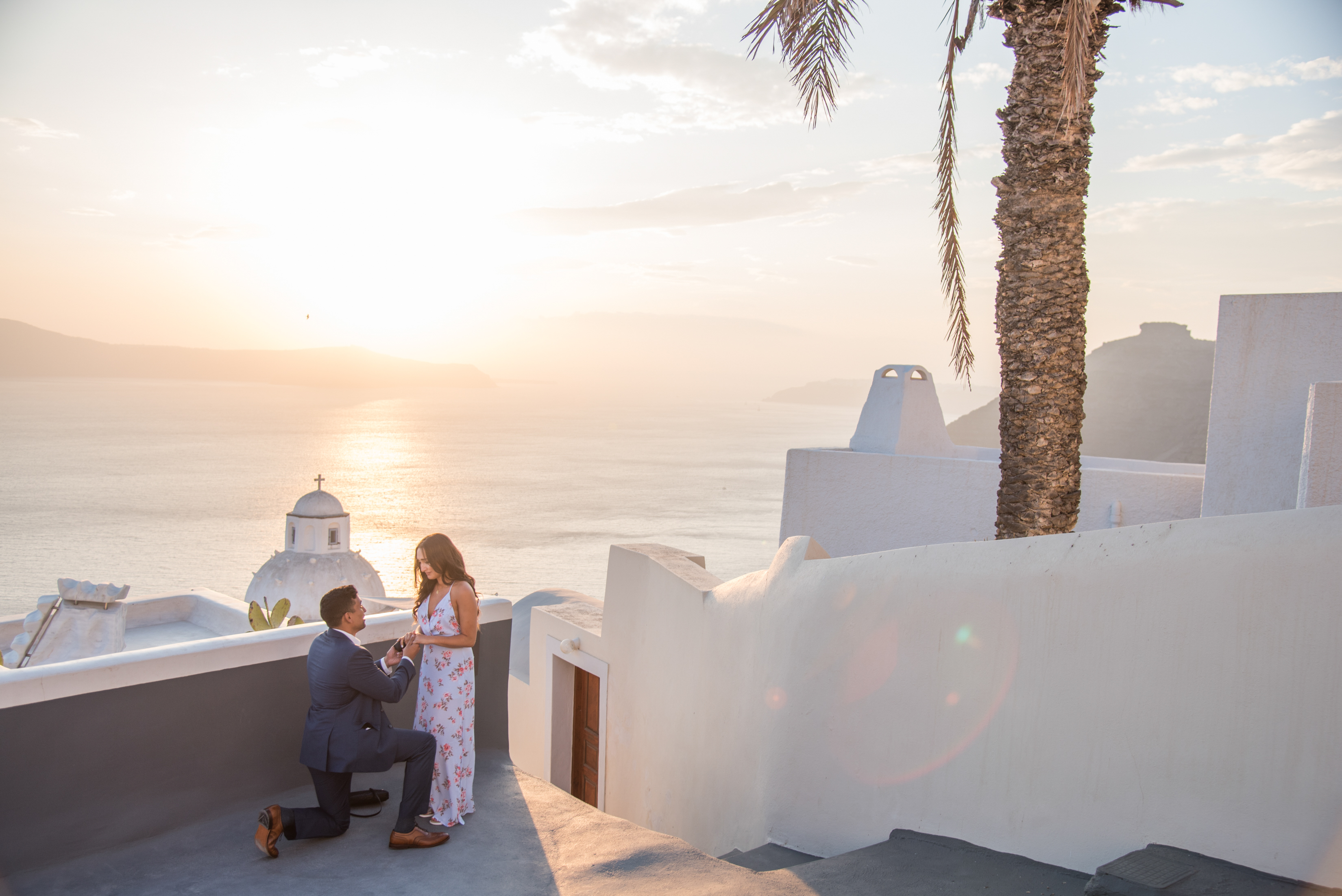 With breathtaking sunsets and stunning 360 degree views of the turquoise wonder that is the Mediterranean Sea, Santorini might just give Paris a run for its money as romance capital of the world.

Get the yes in front of one of Santorini’s famous blue roof churches, or along the steep cliffs overlooking the crystal clear sea.

For a truly panoramic proposal, take to the water on a private catamaran sunset tour for a view like no other on one of the most memorable nights of your life.

Walking down the canals of Amsterdam is like stepping straight into a fairytale with its cobbled streets and twinkling lights.

For a proposal made from the stories she read as a young girl, drop down on one knee on one of Amersterdam’s 1,500 bridges, or take the romance up a notch, a sunset boat ride through the Dutch capital’s waterways will set the tone for the first day of the rest of your lives.

Immerse yourselves in the incomparable culture of Spain’s metropolis, a beautiful mix of modernism, gothic architecture and 2,000-year-old temples, for an idyllic proposal in one of Europe’s most bustling cities.

Escape the buzz of the city center with an hour-long trip to the majestic Montserrat mountain and blow her away with the question she’s been waiting for before the Santa Mara de Montserrat Abbey cathedral, or brave the Stairway to Heaven for a breathtaking, heart-pounding proposal at the top of the stairs.

For something that is truly a-mazing, find your way through the labyrinth at Parc del Laberint d’Horta for a serene afternoon stroll through the gardens, and there may just be a happily ever after on the other end.

Dive into the soulful, historical city of Porto for a trip through the medieval, cobbled streets of Ribeira, or give her a 360 degree view of this coastal wonder from the top of Clérigos Tower.

For a truly magical moment with the bookish love of your life, ask for her hand at the bottom of the iconically red staircase of Livraria Lello for a storybook proposal that will sweep her off her feet.

A labyrinth of canals and bridges to lead you through this UNESCO World Heritage Site, the Floating City is the perfect destination for getting lost in love.

Glide under the Bridge of Sighs on a romantic gondola ride for the quintessential Italian proposal, or skip the crowds and share a private moment for an evening proposal at the San Marco basilica.

If you want to feel like the only two people in the world, this isolated island in the middle of the North Atlantic is perfect for those who crave peace, quiet, and an abundance of beauty everywhere you turn.

Get starry-eyed under the blanket of the Aurora Borealis from September to April, or say yes beneath the dramatic Seljalandsfoss and Skógafoss waterfalls for a proposal straight out of the movies.

Want a truly unique proposal idea? Look no further than the sparkling blue cave of wonders of the Langjökull glacier to give that ring something to reflect off of.

The city of art and the home of the Renaissance that catapulted Europe out of medieval times, no one can resist the romance of Firenze’s cobblestone streets and grand architecture that will envelop you the moment you cross through the gates of the city.

Take her on a mosey hand in hand over the Arno, through the hustle and bustle of Ponte Vecchio for a glimpse at the indulgent Tuscan hills to your North and South, or quiet things down with a walk through the Boboli Gardens to surround yourselves in the satisfying symmetry of the emerald vegetation.

For sweeping city views you can’t find anywhere else in Florence, journey up to Piazzale Michelangelo for a showstopping proposal that will knock her socks off.

Planning the perfect proposal isn’t easy, but with the help of our Concierge Team, we’ll get you set on the road to capturing the perfect moment that will change the rest of your lives.

Planning Your Bachelorette Party in London

The 10 Most Epic Proposals From Around the World in 2017

Famous around the world for its delicious tapas, surreal architecture, and bustling party life, Barcelona needs no...