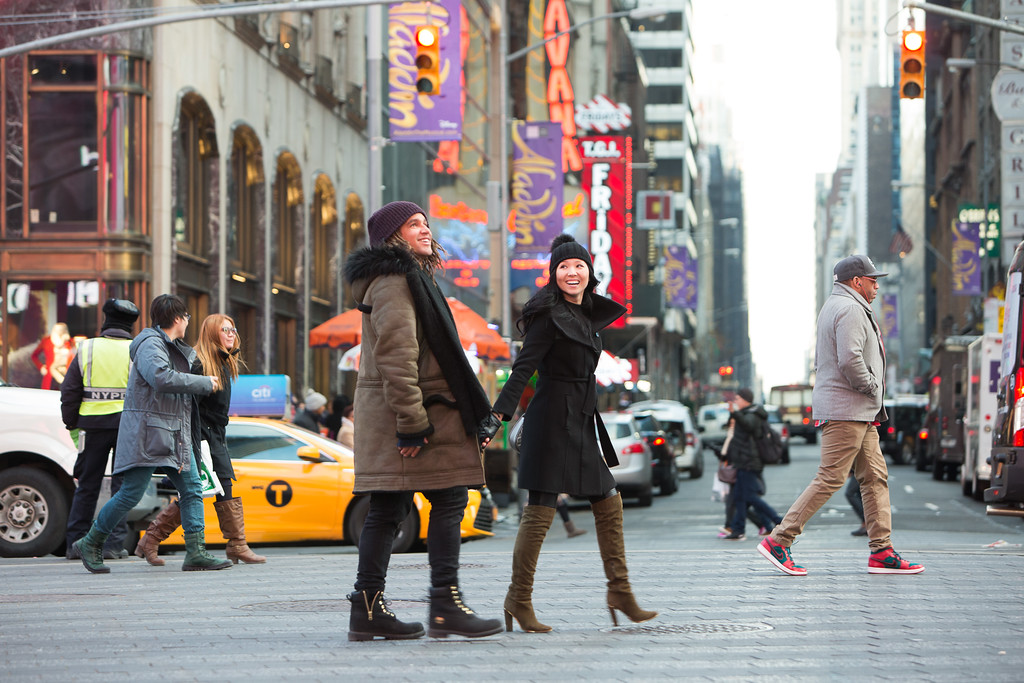 Our list of beautiful locales to stoke your NYE wanderlust.

Think back to your most epic New Year’s Eve. Was it the big party you scored a ticket to (with the Champagne fountains and gourmet food), the eyebrow-raising fireworks show, or the people you shared it with that made it such a standout? In truth, any destination can be your next most amazing New Year’s Eve if you’ve brought your favourite people with you. Even if everything goes wrong (wardrobe malfunction, power outage, blizzard), as long as you’re together with your friends and loved ones, you’re going to close out the year with a night of laughter and good memories. So to inspire your next NYE adventure, big or small, here is our list of the top 10 destinations to ring in 2019. 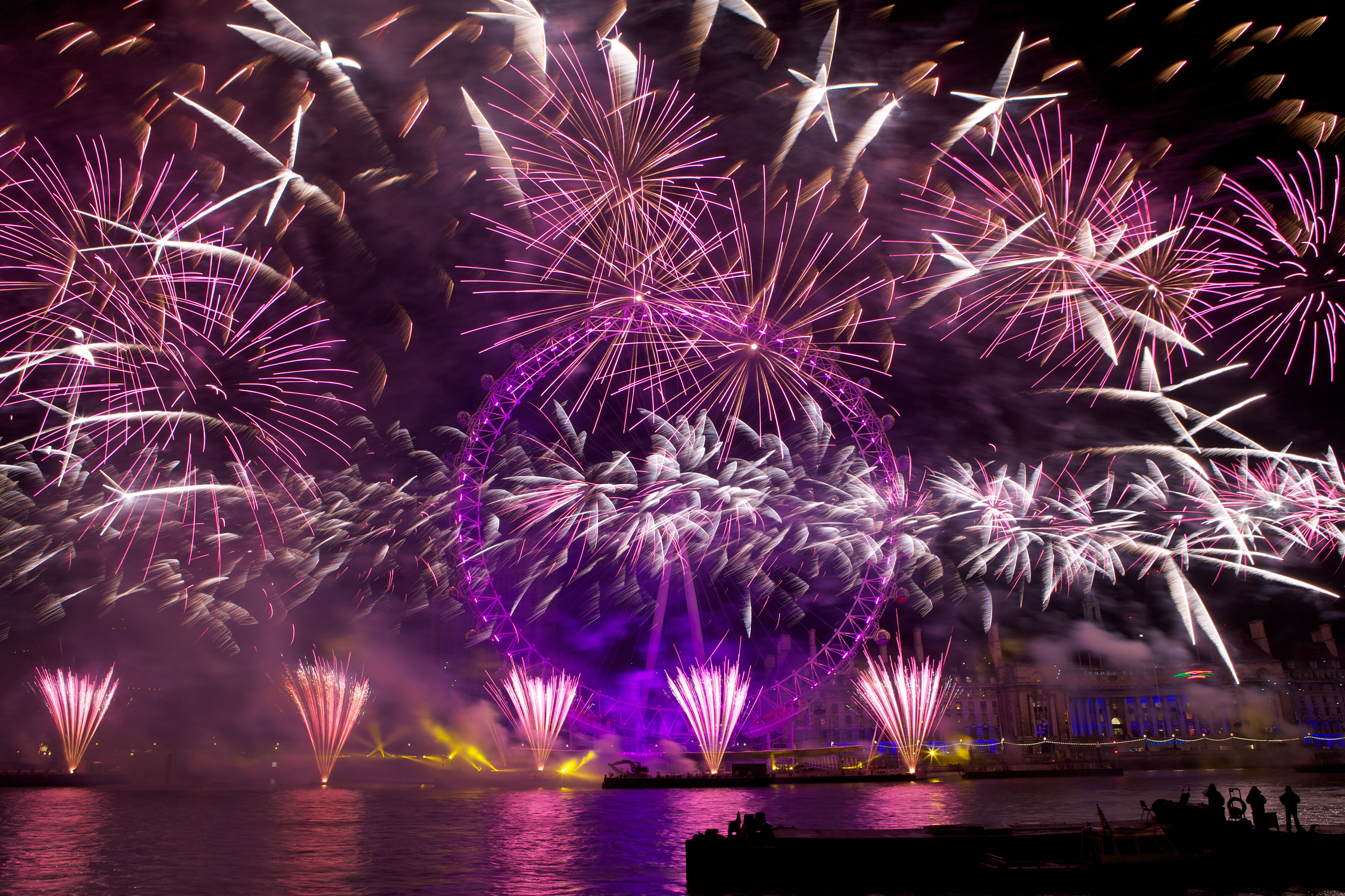 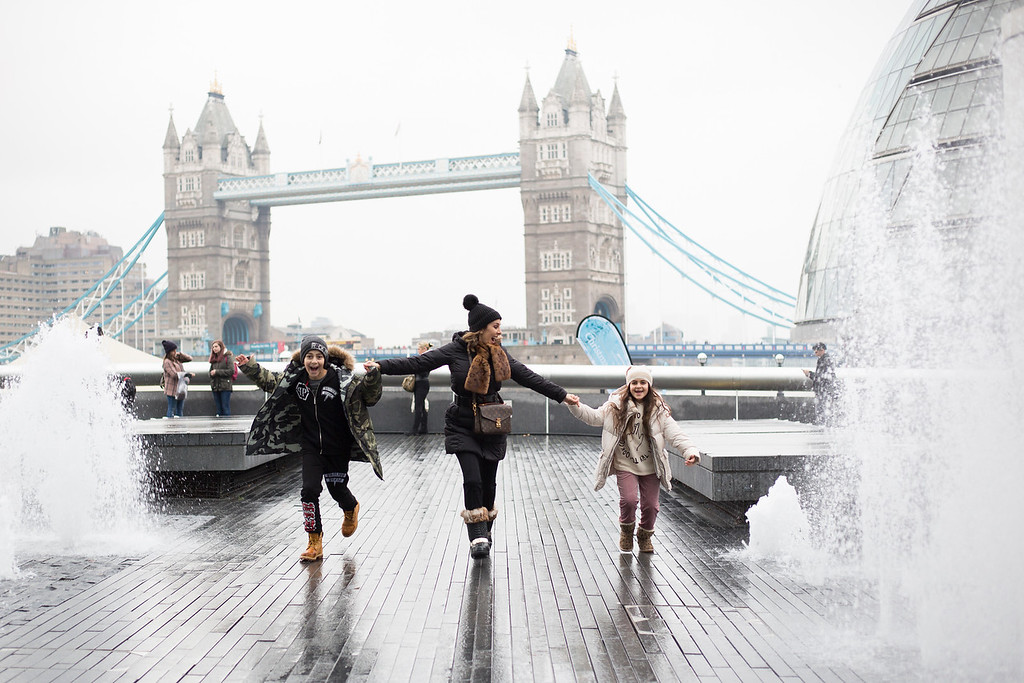 With its River Thames and London Eye ferris wheel, London is an iconic destination for any New Year’s Eve festivities. The evening’s over-the-top fireworks show and live entertainment are so popular this has been a ticketed event since 2014, but there are plenty of other ways to join in on the fun: evening cruises are a fantastic option. You’re right on the water with the fireworks above, close enough to see the live entertainment and hear Big Ben’s famous chimes at midnight, and yet apart from the big crowds. Champagne-toasting party-seekers might want to score a spot at the London Sky Bar (purported to have the best view in London), or you could always sit back and enjoy the view over a late dessert at one of these London restaurants with great fireworks views. 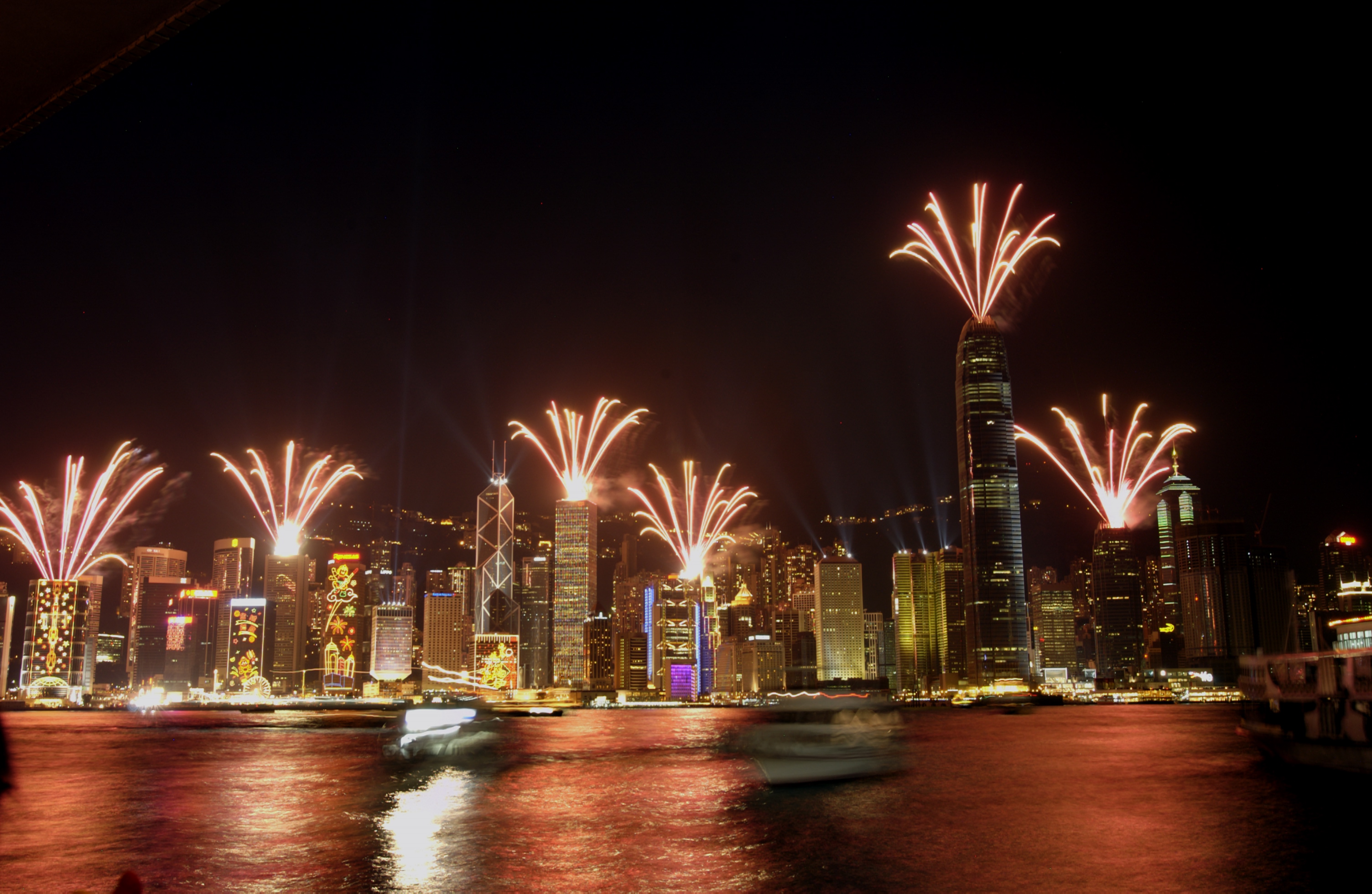 Victoria Harbour sits right in the urban heart of downtown Hong Kong, and is a huge draw year-round, but it’s especially lit up during December and into the New Year with its signature evening Symphony of Lights show (the fireworks that look like sprinklers on top of the skyscrapers). Even though Chinese New Year isn’t until February, Hong Kong still does a special countdown on Dec. 31. A shooting stars display kicks off at 11 p.m., with intervals that last until the musical NYE fireworks show at midnight. The best viewing points are along the Tsim Sha Tsui waterfront (including the Hong Kong Cultural Centre Open Piazza), along with Hong Kong Island, or at Golden Bauhinia Square. Bonus: the weather in Hong Kong ranges from 26 C to 10 C so standing outside at night won’t be a miserable affair. 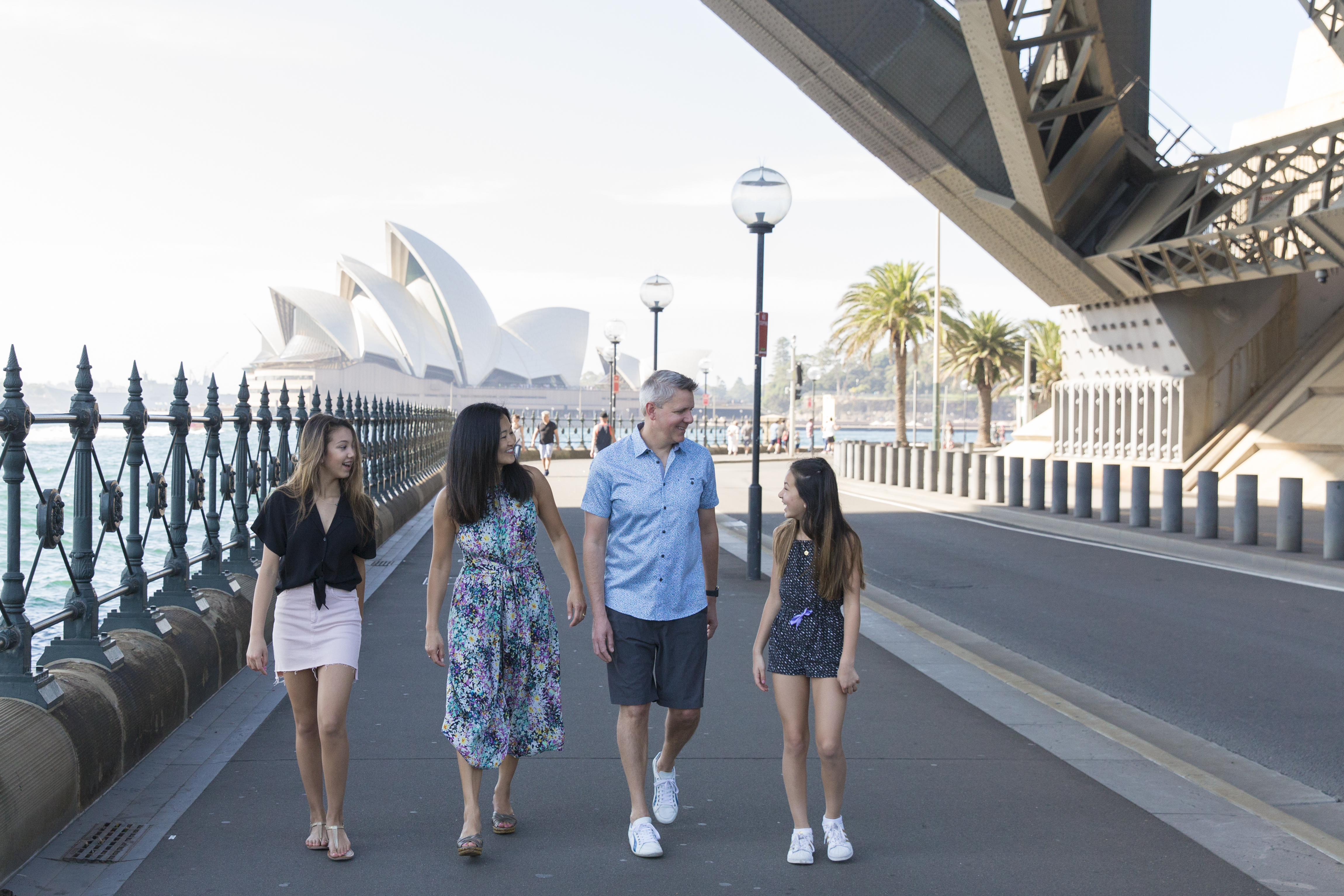 A Balmy Summer and Sails NYE in Sydney, Australia

Bring on the sunshine and beach wraps, December 31 is peak summer time in Sydney! Which makes it no surprise that the entertainment calendar starts early for NYE. In Sydney Harbour, pre-show entertainment kicks off at 6 p.m. with a flying ace aerial display and a tug-boat water display. At 7:30 p.m. Gadigal Elders welcome visitors to Gadigal Land with a historic ritual of purification and unity, then at 9 p.m., the first fireworks show starts so the youngsters can partake. At 9 p.m. the whole harbour is illuminated with lit-up ship choreography, with the main fireworks event (which has multiple firing points around the harbour, like the Sydney Harbour Bridge, the Sydney Opera House and barges in the harbour) starting at exactly midnight. For more info check out sydneynewyearseve.com. 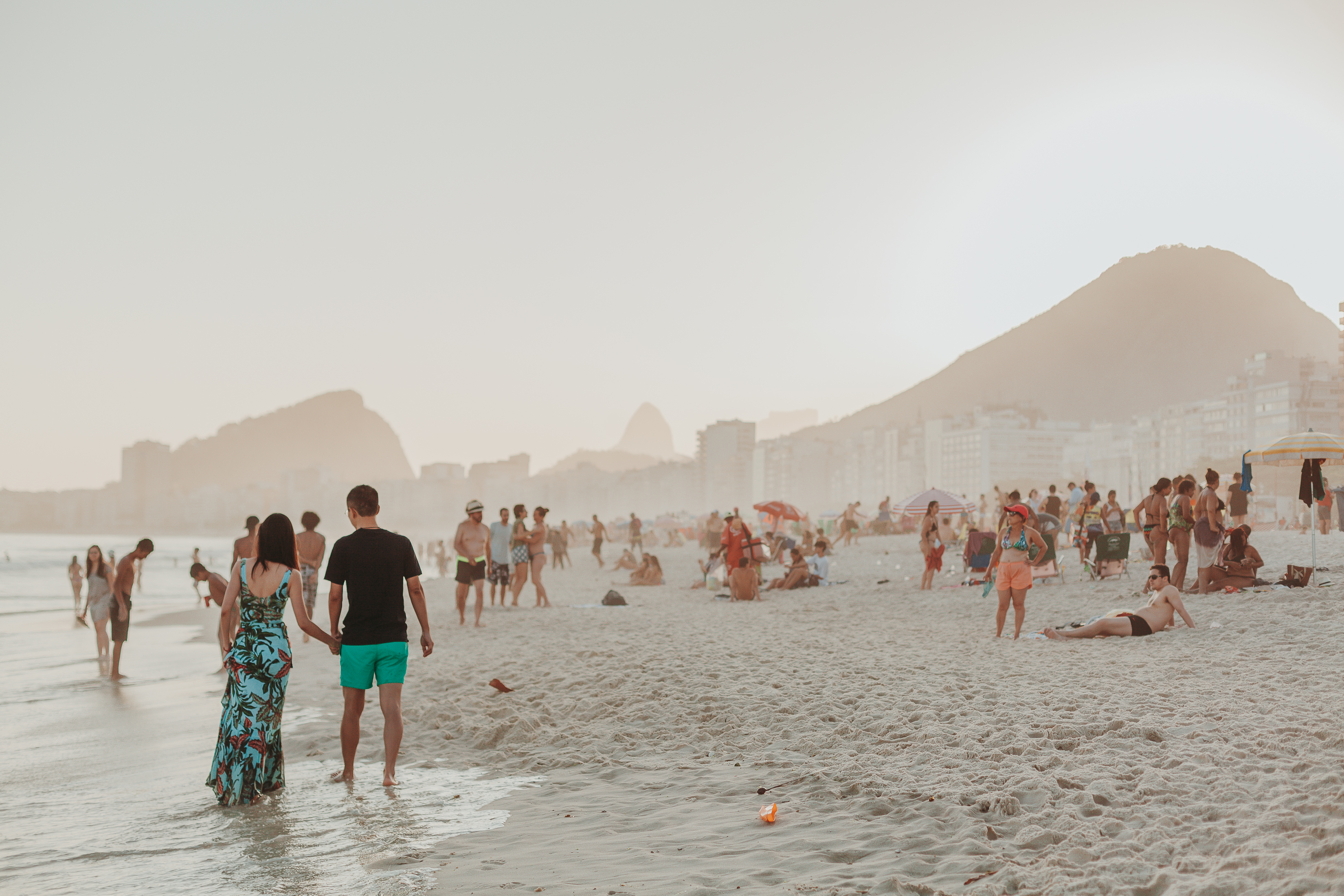 If you’re looking for a massive beach party—this is it. Millions of people turn out to celebrate life, and the New Year in Rio de Janeiro, for a party that’s even bigger for this city than Brazil’s famous Carnival. Taking the metro to Copacabana Beach puts you right in the centre of all the action, with the locus in front of Copacabana Palace. Head down early to get a good spot (around 10 p.m. is what locals consider “early”) and although there’s no official dress code, you’ll find a lot of Brazilians wearing white, which symbolizes peace. There’s a four-mile long stage that will house dance and music performances, which takes over after the dazzling fireworks display. The Rio tourism board has even been dropping hints that Madonna (yes, that Madonna) will be doing a surprise performance, along with Caetano Veloso and Black Eyed Peas. Guess you’ll have to see yourself to find out! 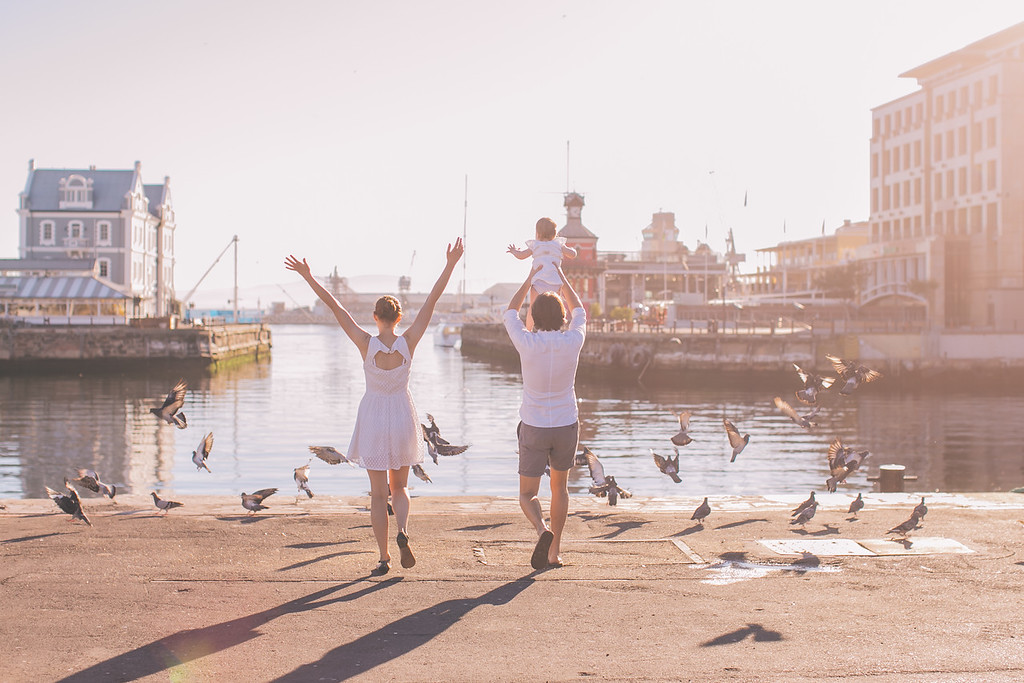 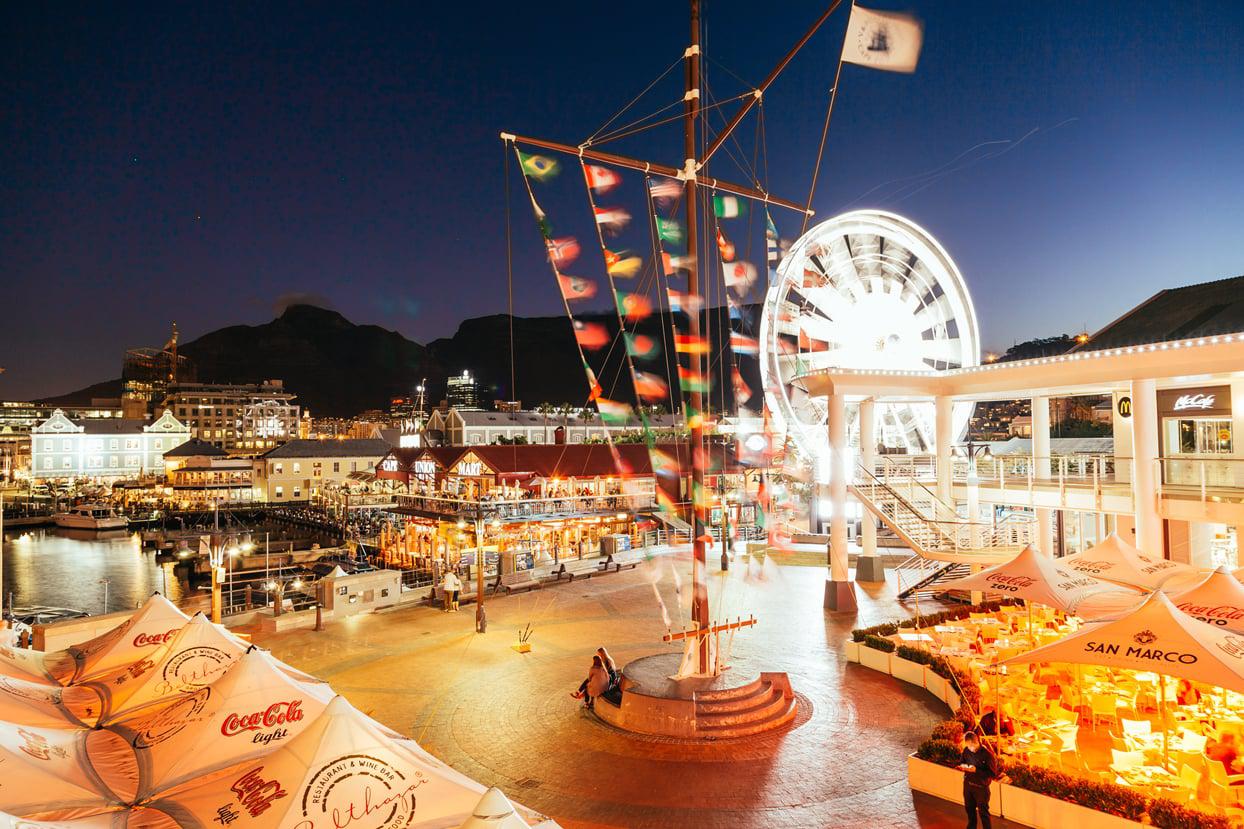 For New Year’s Eve in Cape Town, we’re headed to the city’s romantic V&A Waterfront. It’s home to cruise boats, museums, loads of restaurants (80-plus) and boutique shopping, including 22 historical landmarks, so its waterfront setting couldn’t be more perfect for families ringing in the New Year. On Dec. 31, visitors will see pop-up opera, orchestra and acapella performances, and get to snack on local food available at stands throughout. This year there’s even a Mother Earth theme, so look for that fun thread to be woven through the evening’s entertainment and midnight fireworks display. Click here to find out more info on Cape Town parties, restaurant packages and events. 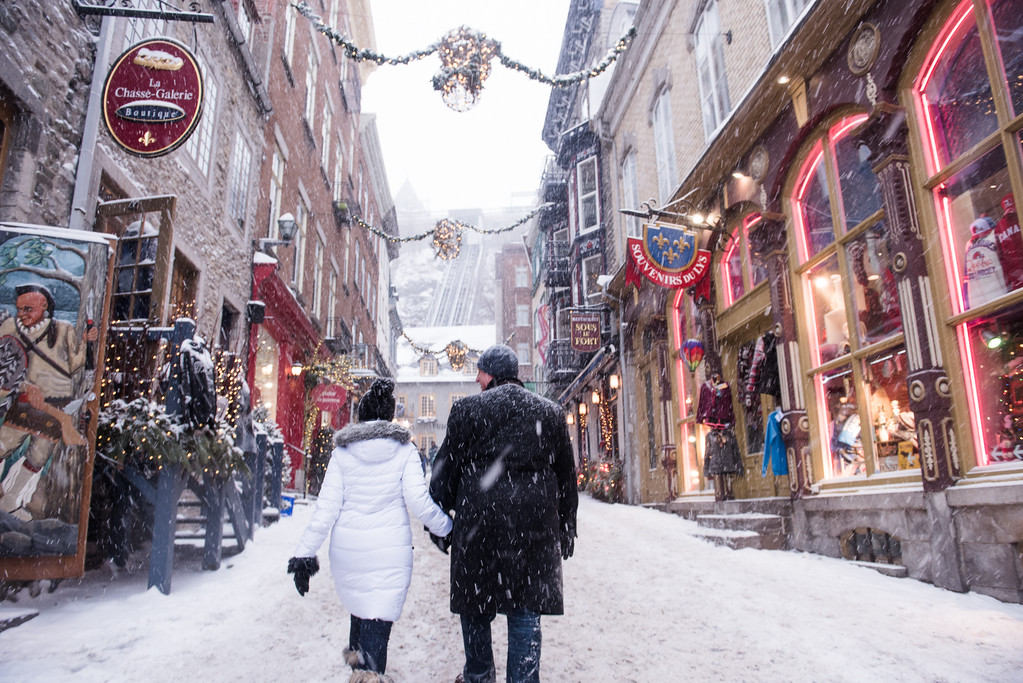 After you’ve sufficiently bundled up (long underwear recommended, mittens a must), grab your sweetheart and go for a winter wonderland party hop along Quebec City’s charming Grande Allée (pictured above!). It’s still decked out in seasonal Christmas flair with twinkle lights and holiday displays, and a host of gourmet restaurants and bars have even created heated outdoor patio spaces for revellers to enjoy (with hearty fire pits, industrial heaters and blankets!). Pro tip: cocktails have historically been known to help warm up cold merry-makers, too. And because this is Quebec, there are sweet treats everywhere. Think maple syrup candy sticks and marshmallows you can roast yourself at Place Georges V. It’s all about embracing the cold with activities like tobogganing, snowshoeing and ice skating during the day, and then celebrating with the other convivial New Year’s Eve conspirators at night. 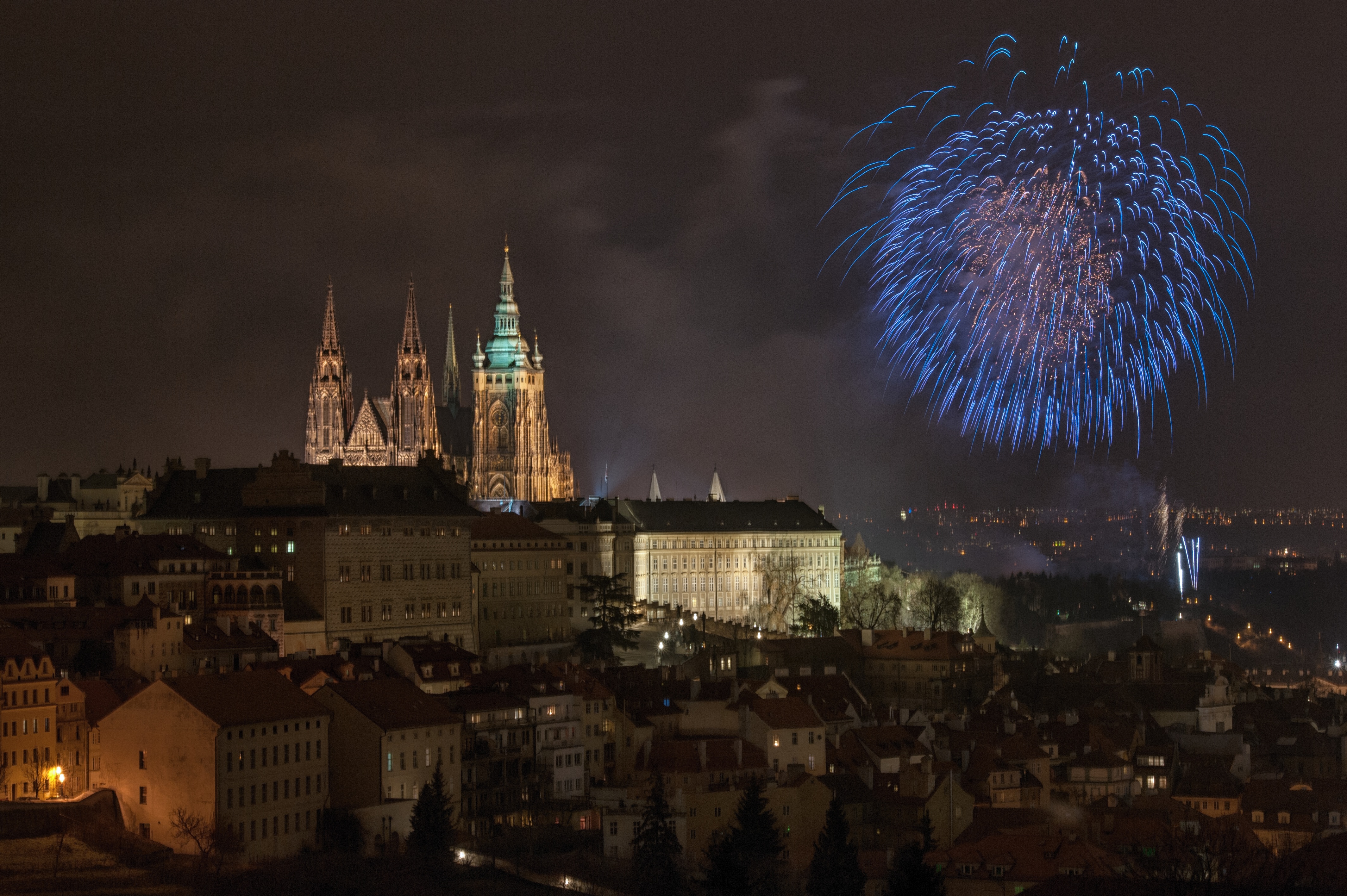 Prague itself is bisected by the Vltava River, and along with the city’s beautiful bridges (like the Florence-esque Charles Bridge, which dates back to 1357), the Romanesque, Gothic and Rococo architecture make Prague one of Europe’s most stunning cities. Naturally, a night spent in its public squares taking in the fireworks over the river is a sight you won’t soon forget, however, Prague doesn’t do its New Year’s fireworks until January 1st at 6 p.m. Which is kind of nice, because that means any New Year’s Eve festivities—like the iconic New Year’s Eve with Mozart opera at the Estates Theatre or the extravagant hotel parties—won’t overlap with the light show. This year’s fireworks will be set to songs from the Rolling Stones, Beatles and Marta Kubišová, and the best viewing spots will be: Legion bridge, Čechův bridge, Mánes bridge, Charles Bridge, along with Dvořák riverside, Smetana riverside, Petřín hill and Letná. 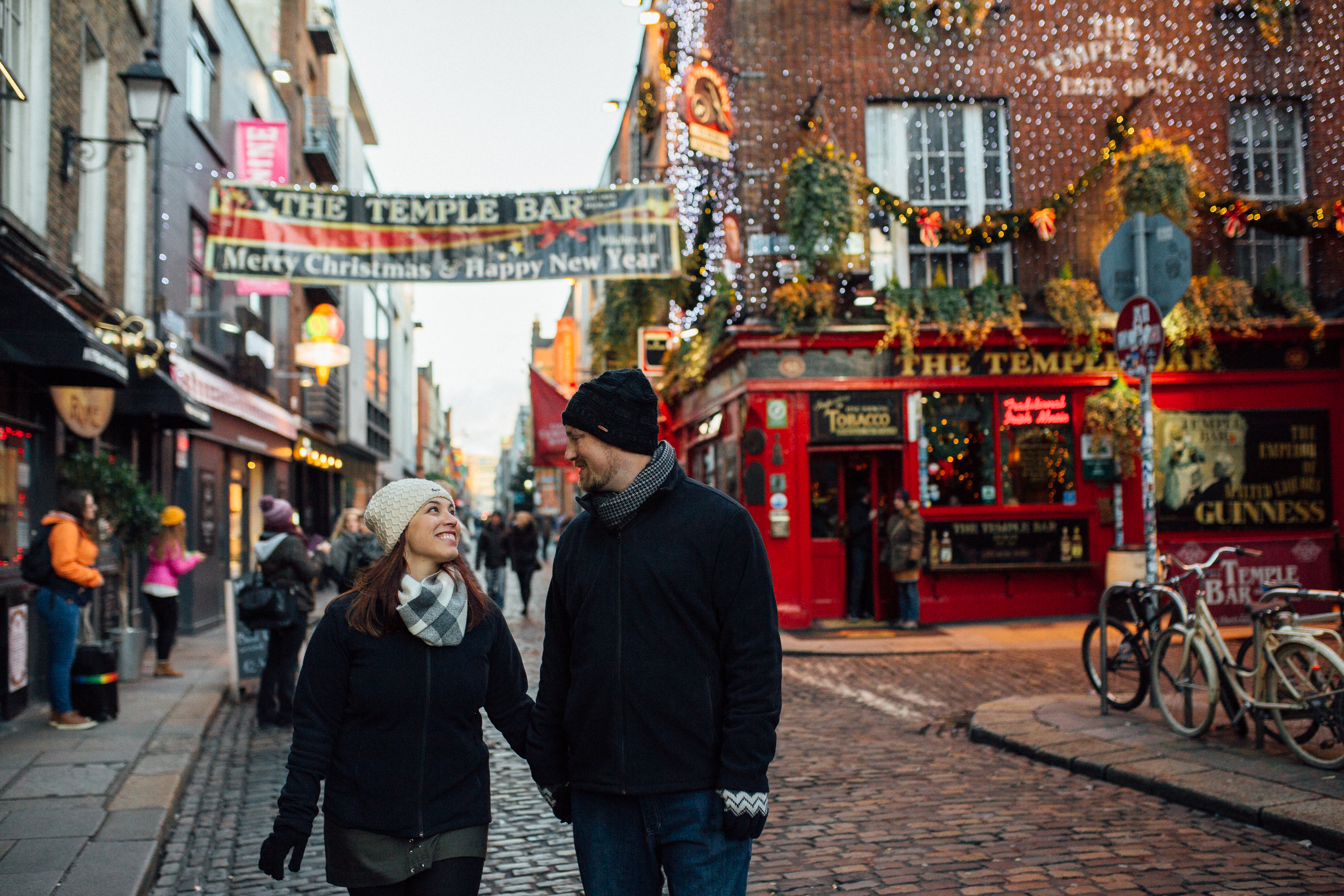 The pub-lined cobblestone streets of Dublin are charming even on its most rainy days, so imagine how special this place is when the whole city is out celebrating for New Year’s Eve. One of Dublin’s iconic landmarks, Custom House, is party central for the festivities. Starting at 11:30 p.m., this 18th-century government building along the Liffey River gets lit up with a free choreographed light show that’s projected onto its stone walls, complete with lasers, aqua beams, live DJs and percussionists. There’s a special kid-bedtime-friendly version earlier in the evening at 6 p.m. and if the young ones can hold out until 8 p.m. there’s a live concert with Dublin’s platinum-selling artist Gavin James.

Sure, the Times Square New Year’s Eve Ball is the backdrop entertainment to innumerable at-home celebrations worldwide, but what if this is the year you see the ball drop in person? The ball gets raised to the top of its flagpole at One Times Square at 6 p.m., but you’ll have to get down to Times Square around noon to secure a spot. Live performances kick off at 8 p.m. (featuring, most notably, Christina Aguilera) so prepare to be blowing noisemakers and woo-hooing on your feet until midnight when the ball drops and the crowd goes wild. Looking for something more family-friendly and low-key? Heading to Prospect Park to watch the free fireworks show is your best bet. Or for something a bit more “active” you could partake in the annual four-mile NYE midnight run, you know, just for fun. 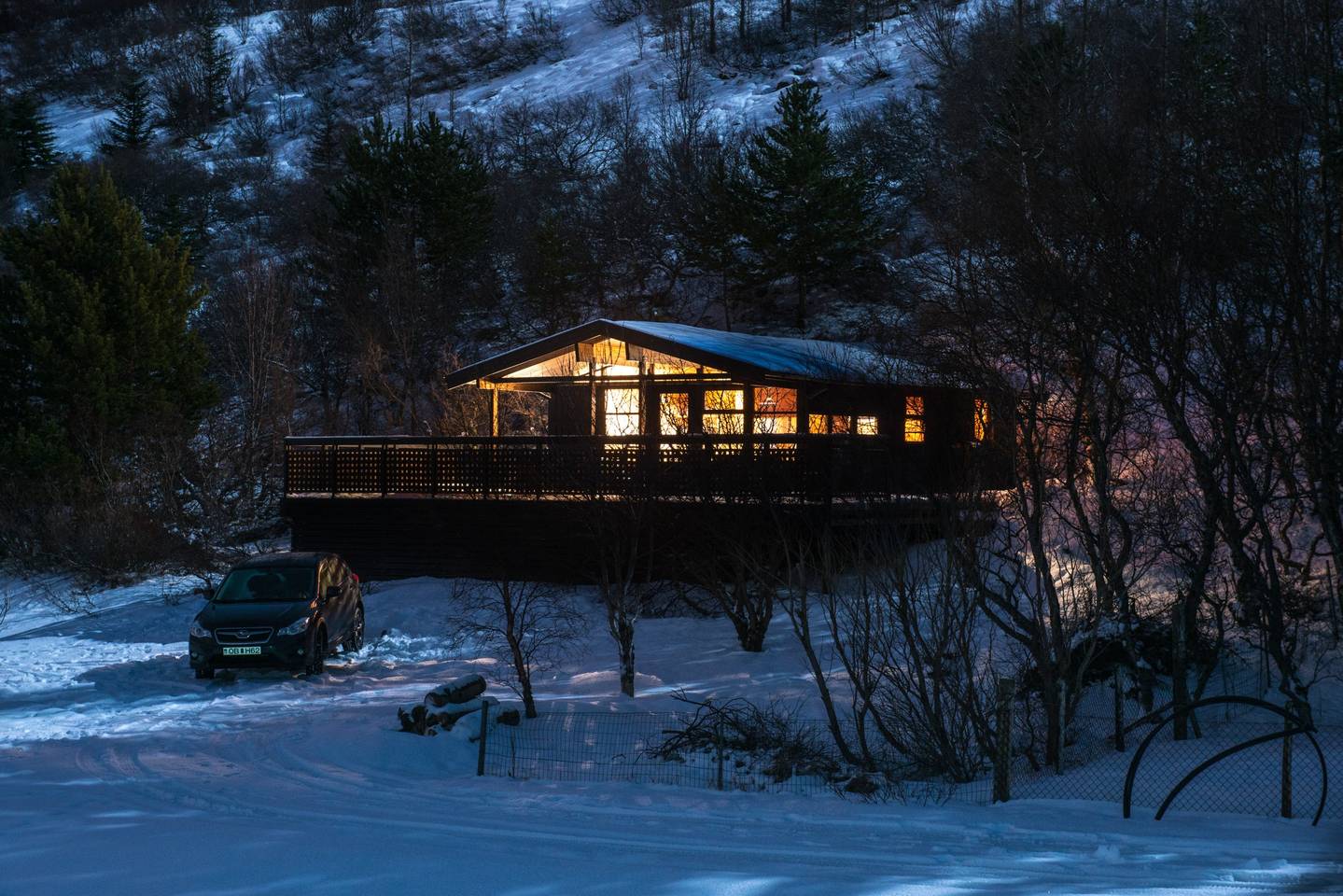 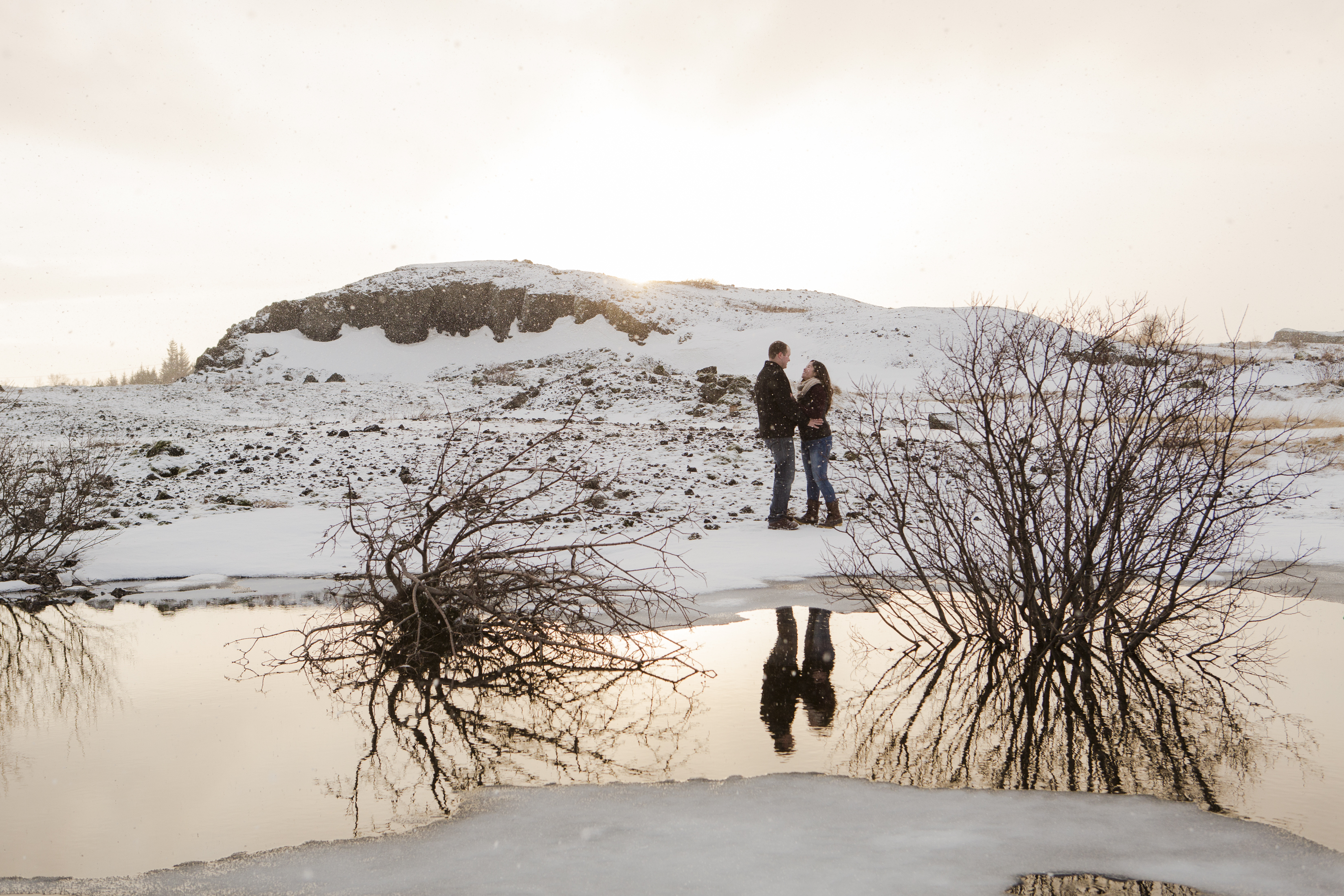 Captured by Flytographer Rakel in Reykjavik

OK so maybe you’re not the party-until-the-break-of-dawn type, or you have no interest in standing outdoors for long periods of time, no matter how dazzling the light displays—that is all fine, there is still a New Year’s Eve destination for you. For the intimate-setting celebrationist, might we suggest a remote Icelandic cabin, where you can cozy up inside under alpaca blankets, with board games and spiked hot cocoa, all the while enjoying views of the Northern Lights? You can cheers the New Year with a close group of friends over sparkling wine, decked out in your finest party threads, OR dressed to lounge in fuzzy slippers and a terry cloth robe—it’s your party and you make the rules. There are scads of great Airbnb options in Iceland for cute little tucked away places, but we love this cabin near the Blue Lagoon.