How to Surprise the Highly Suspicious Love of Your Life 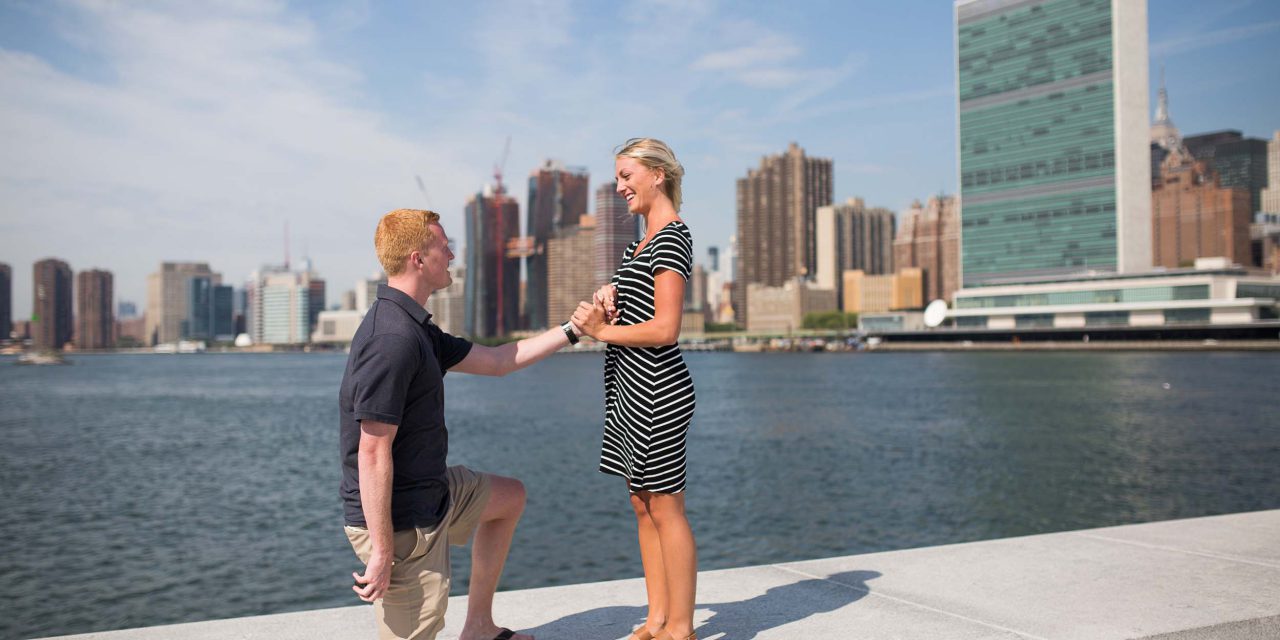 A study abroad Semester at Sea brought Nic and Taylor together. But how does one pull off a surprise proposal when they’re planning to propose to an expert planner? Nic was able to throw Taylor off the trail of his proposal plans just enough to surprise her with a stunning NYC proposal.

“We met on Semester at Sea four years ago which is a study abroad program. Little did we know that of everyone on the trip, we lived the closest to one another in Kentucky and Indiana. We hit it off right from the start and never looked back. It is funny now to think back about all the times we tried to be around one another by ‘accident.’


“We had already scheduled a two-week trip to Europe for Taylor’s graduation from Indiana University Nursing School and I think we both believed there was a good chance we would be engaged by the end of the trip. That said, I didn’t want her walking around Europe passing every little cobblestone street thinking ‘Is this it?’ So, I figured New York would be the only place I could catch her a little off guard. She is very big into planning, so surprising her is very difficult.

“I was feeling extremely nervous and rattled leading up to the proposal moment. Taylor was very curious about everything going on and why I was taking her to the park where I planned to propose. Because it was the FDR Four Freedoms Park, I had to make up a story about how Franklin D. Roosevelt was my favorite president just to try to keep her on her toes. It didn’t quite work as she kept asking why we weren’t heading into the city, so I was definitely on edge but it all worked out in the end beautifully. That situation right there is what I love about our relationship. She is always challenging me and making me a better person everyday.

“I have never felt emotions like I felt on that day. Scared, nervous, excited, overwhelmed, happy, ecstatic and gratified are just a few words that barely describe how I felt. It was such a great feeling though and I will cherish that moment forever.


“Right after the proposal, I had booked Johnny for a one-hour photo shoot, which Taylor loved. After that, we rushed across town to the heliport for a tour of NYC by helicopter to celebrate our engagement. Since we flew out of JFK that night to London, we only had a little time to see the city. This was definitely the best way to see it all in one fell swoop. It was amazing and really gave us some time to soak in our engagement. Afterwards, we went to the Madison Square Park and got some milkshakes and then just toured around the city the rest of the day. I even took Taylor to Kleinfeld to make herself a wedding dress appointment. It was an amazing day.” – Nic

“Nic and I first met the summer of 2012 poolside at a hotel in Costa Rica. We were about to spend a short-term semester abroad traveling throughout Central and South America on a renovated cruise ship through a program called Semester at Sea. Both of us were studying abroad with one other person, but other than that, we didn’t know anybody! So, the first day, all of the students who were studying abroad together (probably around 250) awkwardly stood around the hotel’s outdoor pool and tried to make friends. Luckily, my cousin Lisa and I had already met a few girls at the airport, who we quickly became friends with. Us girls ran across the street from the hotel and went to a market to buy a handle of rum, Pepsi, and McDonald’s. When we made it back to the pool, everyone wanted to be our friends! But, I specifically remember seeing Nic in his University of Kentucky shirt and I wanted to talk to him! I went up to him and his friend Grant, offered them a drink and made a comment about Indiana University’s basketball team’s recent last second victory over Kentucky, who was ranked #1 at the time. That was my pathetic attempt at flirting.

“After talking with Nic at the pool and briefly seeing him again later that night, I embarrassingly tried to see Nic every chance I could. I invited him and his friend on day excursions we took in Peru, tried to run into him at the dining hall and even lingered in the stairwell that our bedroom hallway connected to (so embarrassing). I think it was the second day of our trip that Nic kissed me and the rest was history. We spent as much time together as possible throughout our month abroad, and then continued our relationship once we returned to America.

“The proposal was so thoughtful and romantic. Just thinking about it makes me cry. We were both very emotional, and I’ll never forget how I felt in that moment. It was the best day ever. I am still in shock about all of the effort and planning that Nic put into making his proposal the most special moment for us and it is definitely a day I will never forget.

“Nic had prearranged for Flytographer to take photographs of us for an hour after the proposal (a girl’s dream), and I am so thankful that we have photographs of the proposal and immediately afterwards to cherish. After all of this, Nic had another surprise for me! He booked a helicopter ride over New York City for us. It was an incredible way to celebrate our recent engagement and see the entire city. After our helicopter ride, we spent the day wandering and sightseeing before we started our Europe trip! I was so excited to have the next two weeks with Nic to celebrate our engagement! We spent the next two weeks traveling to London, Paris, Venice, Parma, Milan, Cinque Terre, Florence, Rome and Capri. It was a very busy, but amazing adventure.” – Taylor