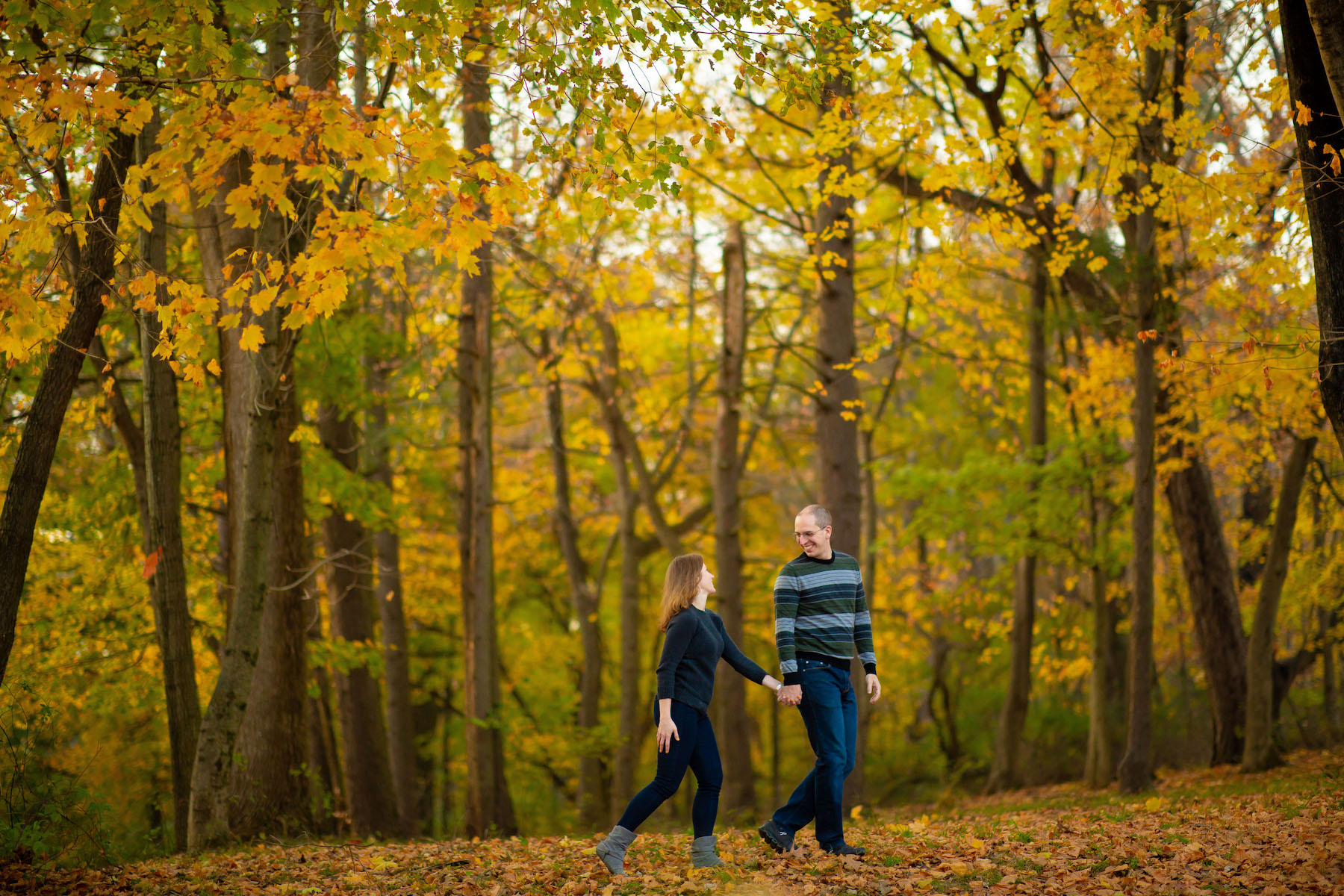 The city of Philadelphia, Pennsylvania, is widely regarded as the birthplace of American democracy. Also known as the City of Brotherly Love and affectionately called Philly by locals, the city has an incredibly rich history, all very apparent in its multiple heritage buildings, parks and monuments. Considered one of the most beautiful cities in the United States, Philly is also a wonderland with the best photo ops you can think of. The hard part is knowing where to point the camera. Worry not: this blog will show you the top five places to take photos in Philadelphia. 🇺🇸

Here at Flytographer, we easily connect people with trusted photographers for fun photo shoots and have captured over three million memories worldwide. Today, we asked our local photographers in Philadelphia to show us around all the best spots for pictures. 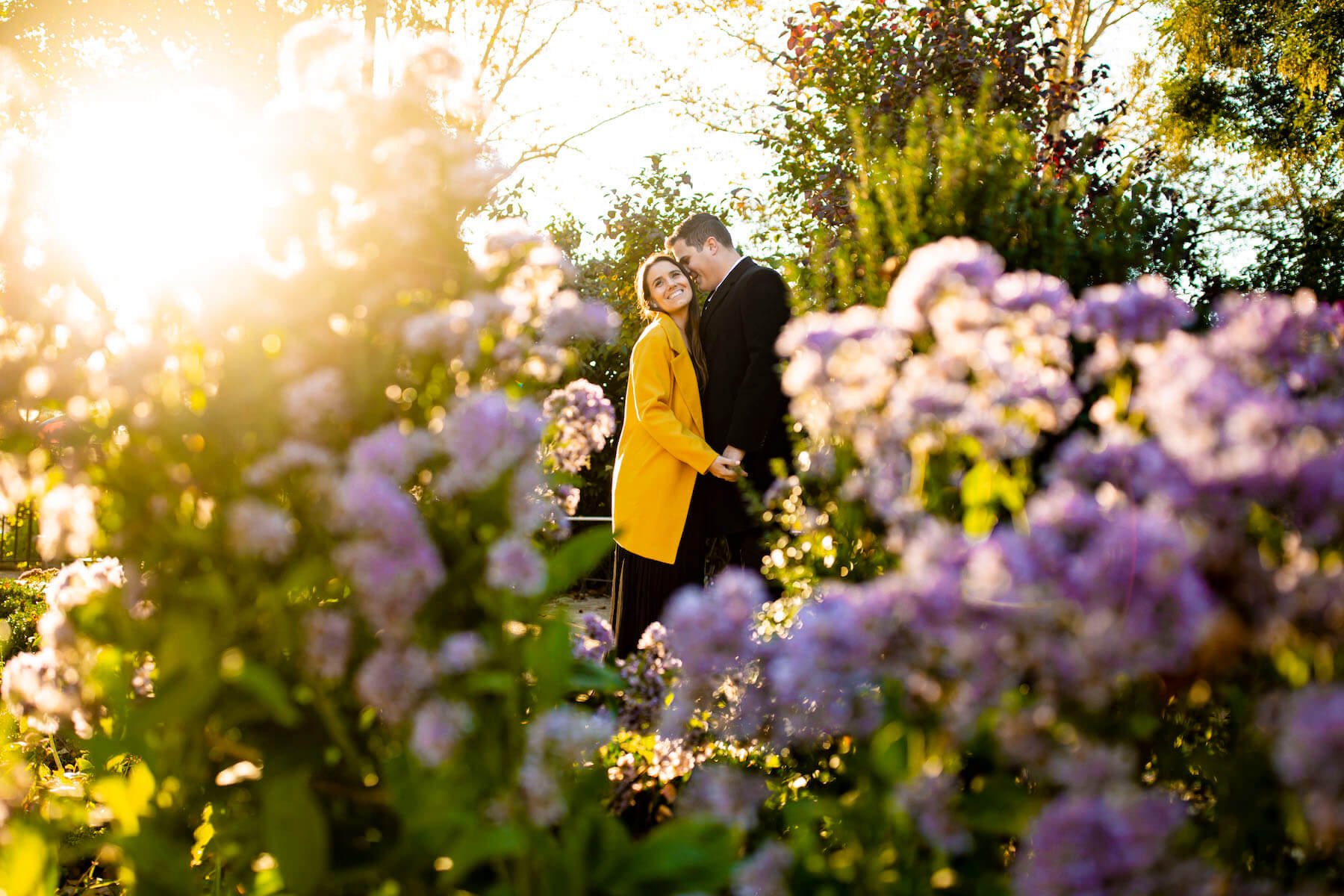 With its preeminent crack, the two-thousand-pound Liberty Bell, perhaps the most iconic bell in North America, is full of symbolism. 🔔 Its inscription “Proclaim Liberty Throughout All the Land Unto All the Inhabitants thereof” relates to many important aspects of American history, such as the country’s independence from Great Britain and the anti-slavery movement. To this day, the famous crack is still subject to debate. Some historians believe it happened when the bell was first tested in 1752, shortly after it arrived in Philadelphia.

The Liberty Bell originally hung in the tower of Independence Hall, but in 2003, it was moved to a smaller and much more modern building right in front of it, the Liberty Bell Center, where it’s kept in a glass chamber for anyone to admire up close. The chamber is a great vantage point for dramatic shots of the bell with Independence Hall in the background. ​​👌

Speaking of which, Independence Hall itself is well worth the visit. Its remarkable brick facade is a classic example of the Georgian style typical of one of the best places to take photos in Philadelphia. Still, it’s about more than just the looks. This is one of the most important buildings in the country, where the Declaration of Independence was signed and the U.S. Constitution drafted. Have we mentioned that Philly exudes history in every corner? 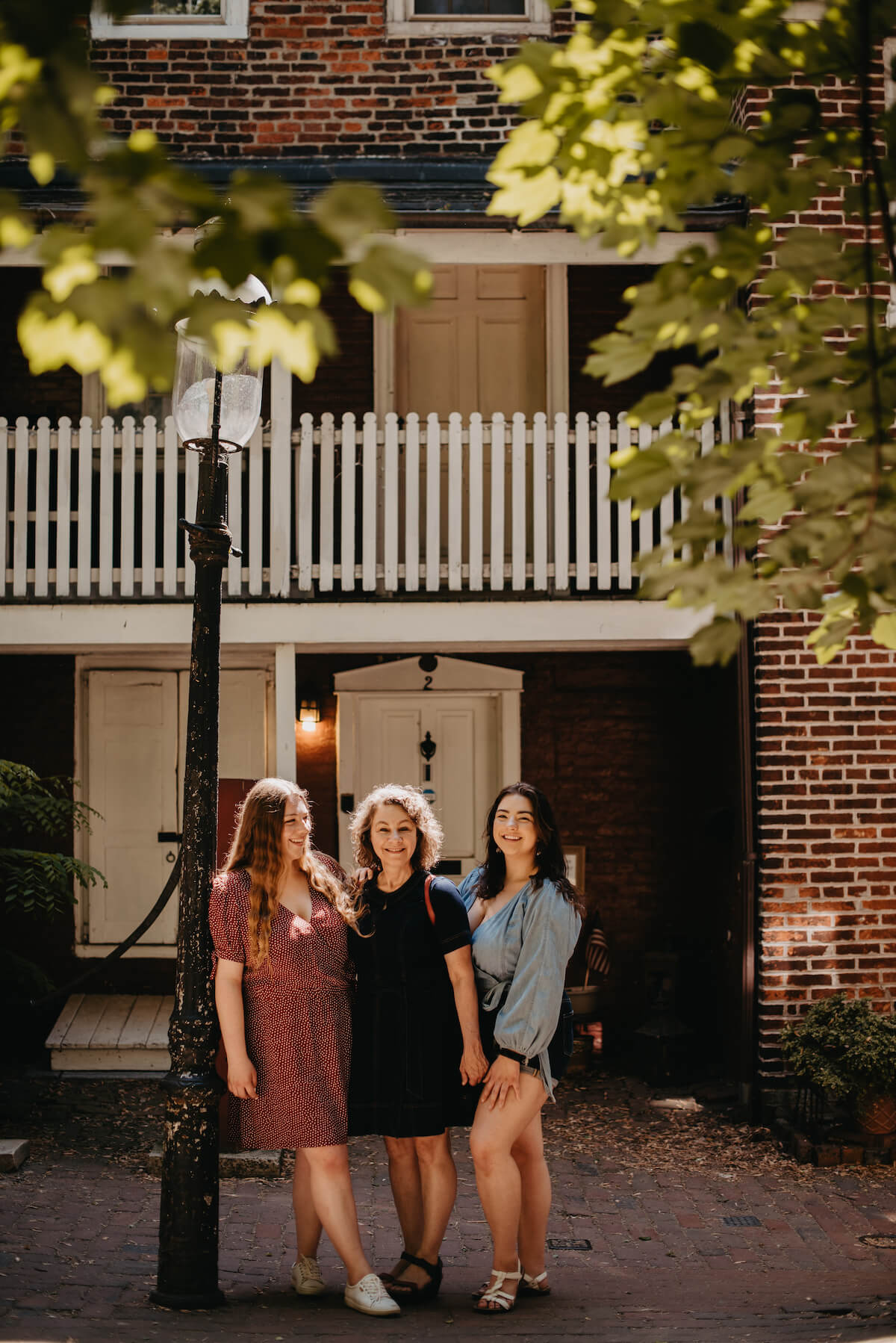 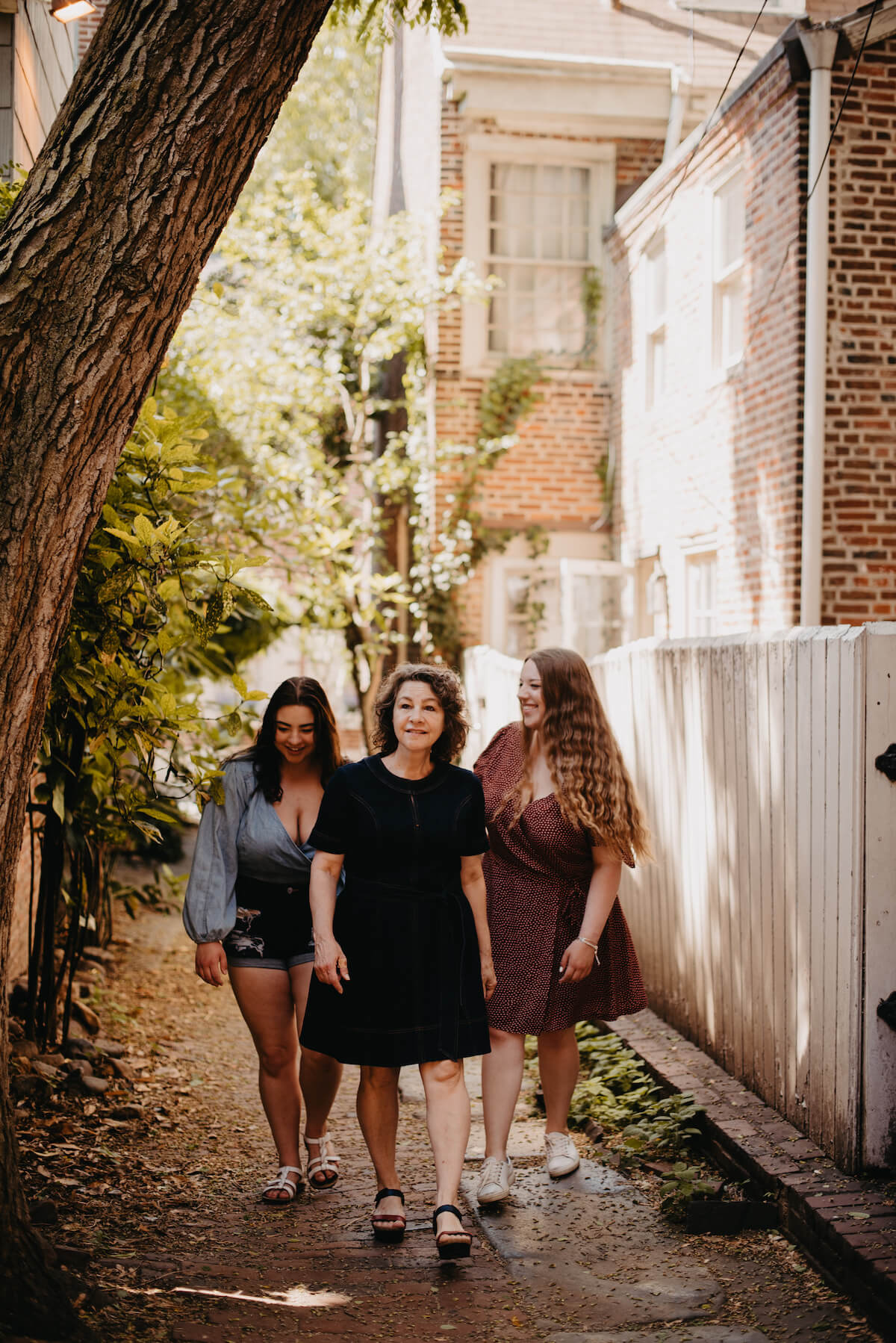 Opened in 1929 in an elegant Beaux-Arts building on Benjamin Franklin Parkway, this small museum contains one of the world’s largest collections of Auguste Rodin’s artworks outside France. The Rodin Museum is a peaceful place that invites contemplation. What better way to do it than admiring over one hundred sculptures, paintings, drawings and studies by the French master? 👨‍🎨

With eight additional artworks, the garden of the museum is also wonderful for more artistic inspiration. On the portico, you’ll find The Gates of Hell. Don’t be spooked by its name; this monumental bronze sculpture depicting scenes of the biblical “Inferno” is a great photo background. Framing the sculpture are two other important pieces, The Age of Bronze and Eve. Everything faces a stunning reflecting pool. The classical allure of this space is enhanced by an original version of the famous The Thinker. This is a great spot to relax when the weather is nice, and everything gets even more wonderful with the cherry trees in full bloom. 🌸

For more great art, head to the Philadelphia Museum of Art, a beautiful Neoclassical building in the heart of the old city. Don’t be surprised if you see people racing up the steps of the frontal staircase and punching the air when they reach the top. This spot is known as “Rocky Steps” and was immortalized by Sylvester Stallone’s triumphant scene in the 1976 film Rocky — one of the greatest moments in film history. 🥊

Surrounding the museum is Fairmount Park, a group of parks cut by the Schuylkill River, where you’ll find the Shofuso Japanese House and Garden, the instagrammable boathouse row and the Belmont Plateau. The last one is an open grassy hill from where you can take the best photos of Philly’s skyscrapers. 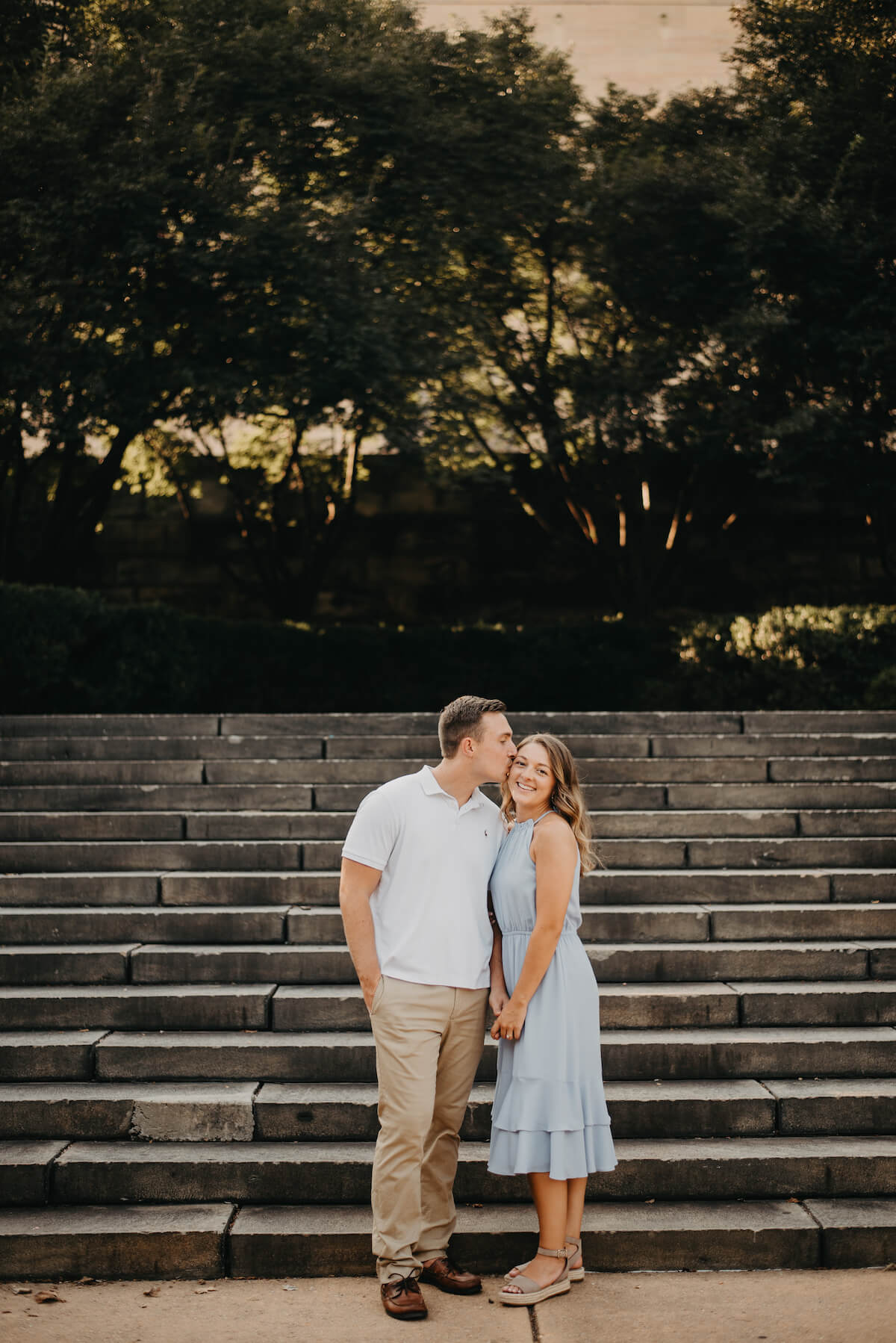 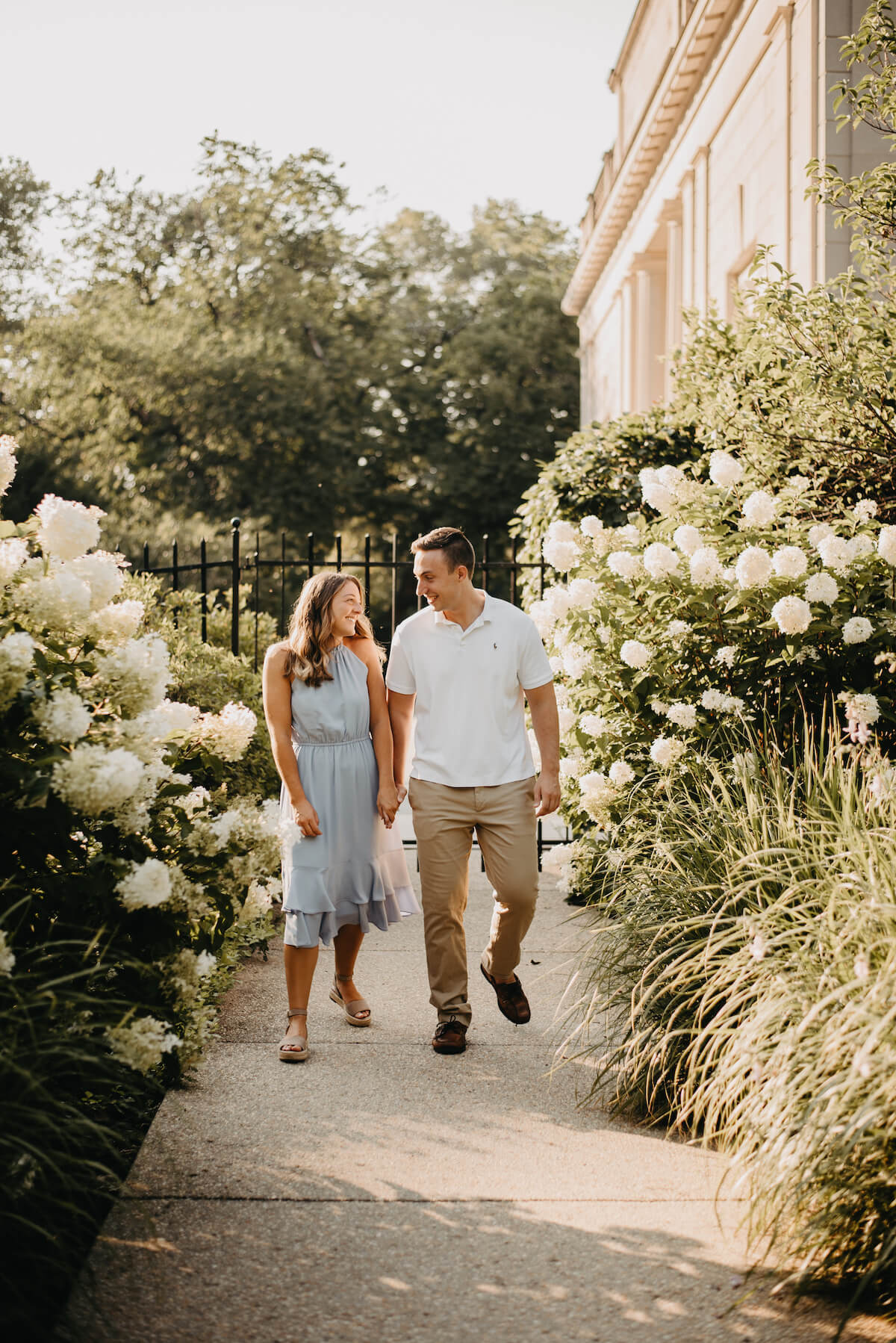 Located close to Liberty Bell is Franklin Square, one of William Penn’s five original public parks in Philadelphia. With great lawns and shady trees, Franklin Square feels like an oasis right in the city centre. The park revolves around a beautiful fountain, one of the oldest in the country, built in 1838 it’s one of the best places to take photos in Philadelphia. The fountain gains an extra touch of magic in the evenings with a beautiful water, light and sound show. ⛲

Near the fountain is Parx Liberty Carousel. This photogenic retro structure is a fine example of Philly’s carousel-making tradition. Some of its horses were modelled after famous racehorses from the past. In the park, you’ll also find one of the “Once Upon a Nation Storytelling Benches,” a bench around which professional storytellers gather people to tell short tales about the square and the city.

Fancy a snack? You’re in the right place. Surrounded by the greenery, SquareBurger is a fast-food shack offering many American favourites, including a local classic: the Philly Cheesesteak. ​​😋

Franklin Square is a few steps from Chinatown, where you’ll find a bustling showcase of Chinese and other Asian cultures and cuisines. Other parks worth visiting in the area known as Center City are Rittenhouse Square, Dilworth Park and Love Park, all very near Philadelphia City Hall. You can head to the observation deck of City Hall for panoramic views of the city.

Although not a park, Philadelphia’s Magic Gardens, on the edge of South Philly, is a stunning open-air installation by award-winning mosaic artist Isaiah Zagar — one of the most instagrammable places in town, no doubt. 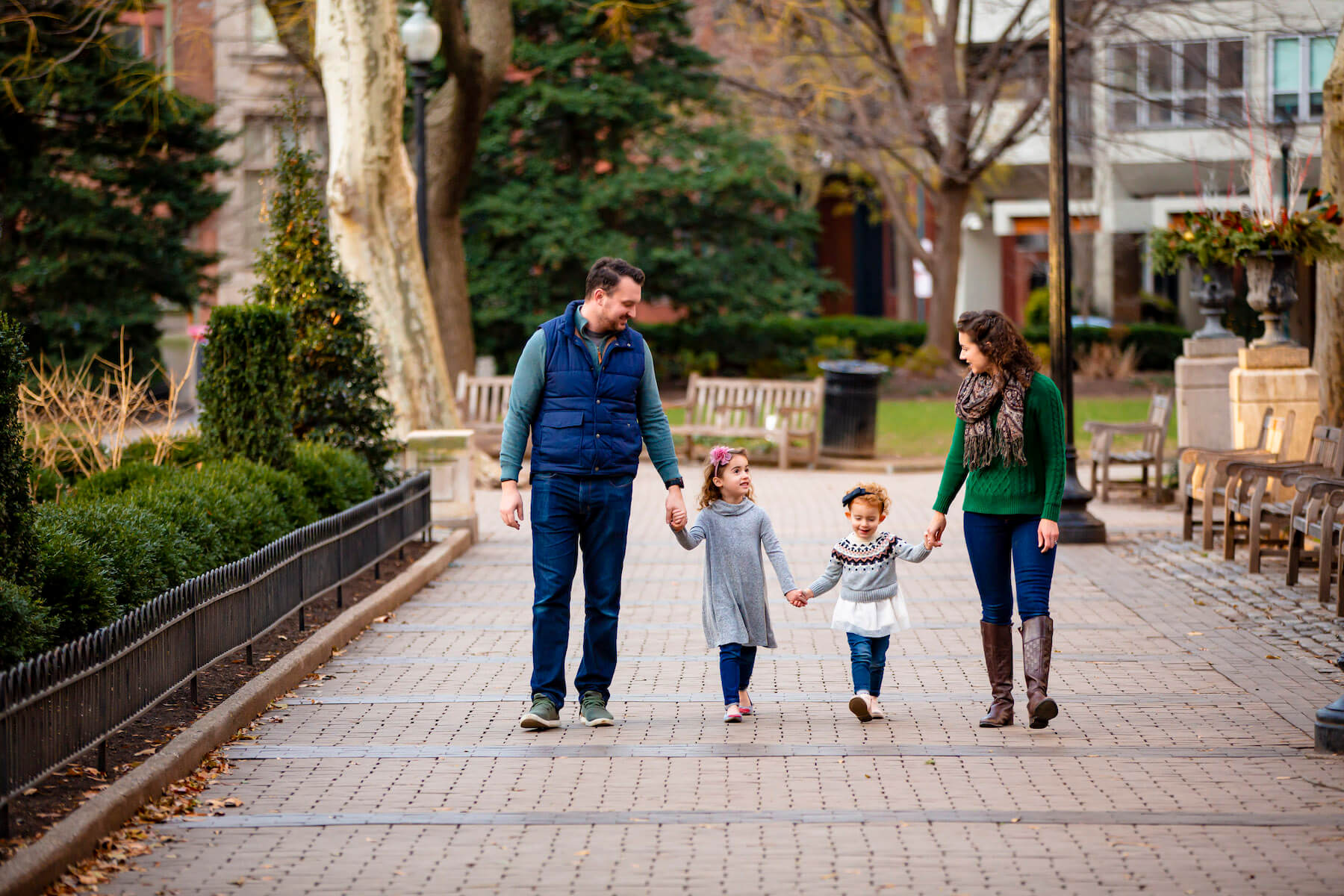 Photo: Flytographer in Philadelphia. Craig and family explore Philadelphia with a family photoshoot. 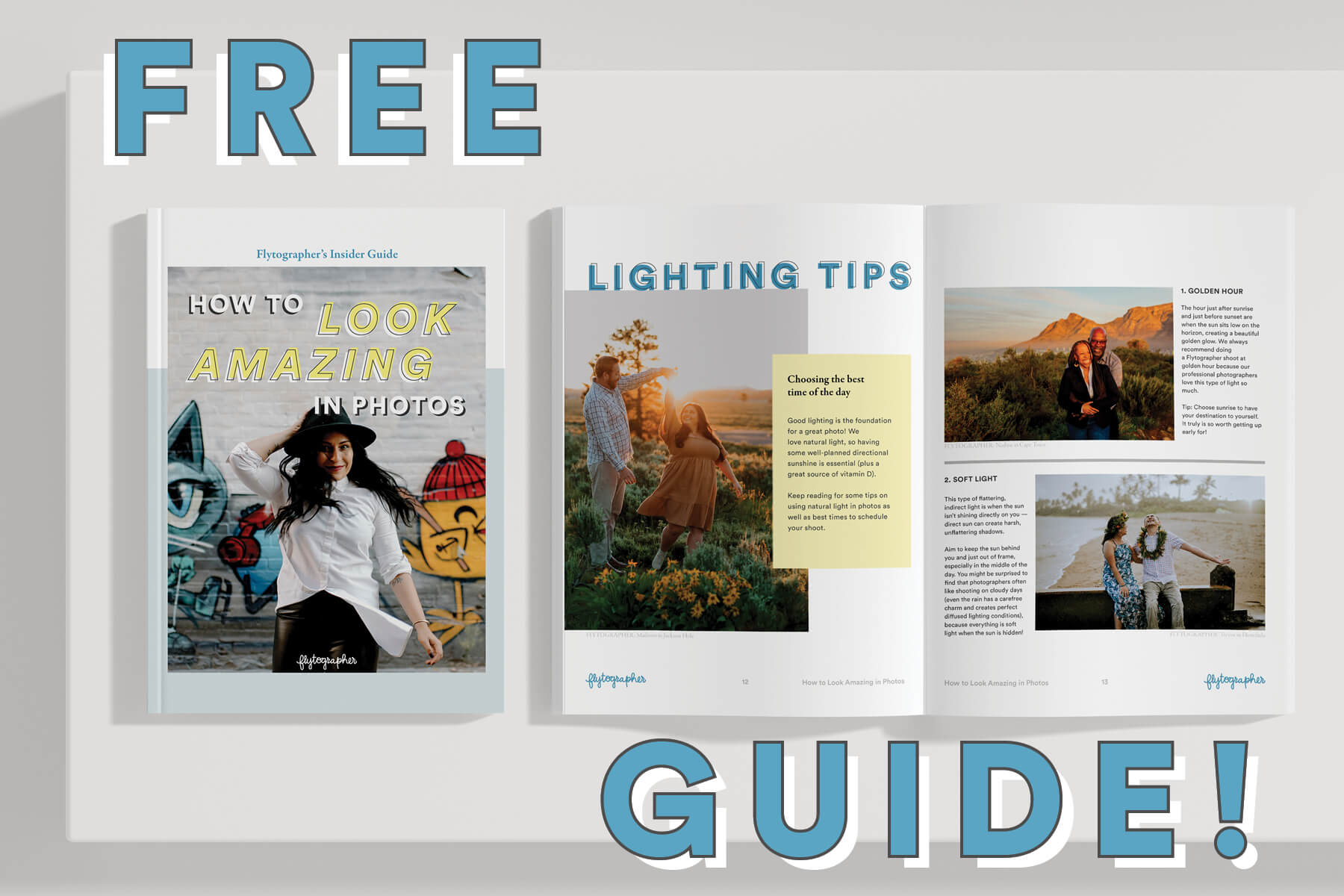 Just a few steps from the banks of the Delaware river is another photo-worthy historic site, Elfreth’s Alley, a quaint cobblestone alley that’s the oldest continuously inhabited street in the United States. The colonial vibes and the sight of the many narrow houses in Georgian style will take you back to the eighteenth century. In the past, they were the homes of many artisans and tradespeople. Their red brick facades and colourful doors and windows are lovely for photos. Do remember that people still live in those houses, so keep that in mind when taking your pictures. 😉

For a better glimpse into the past, don’t miss the Elfreth’s Alley Museum, a home beautifully preserved with a display of artifacts as if still inhabited by a colonial family — a quick peek into a simpler time. 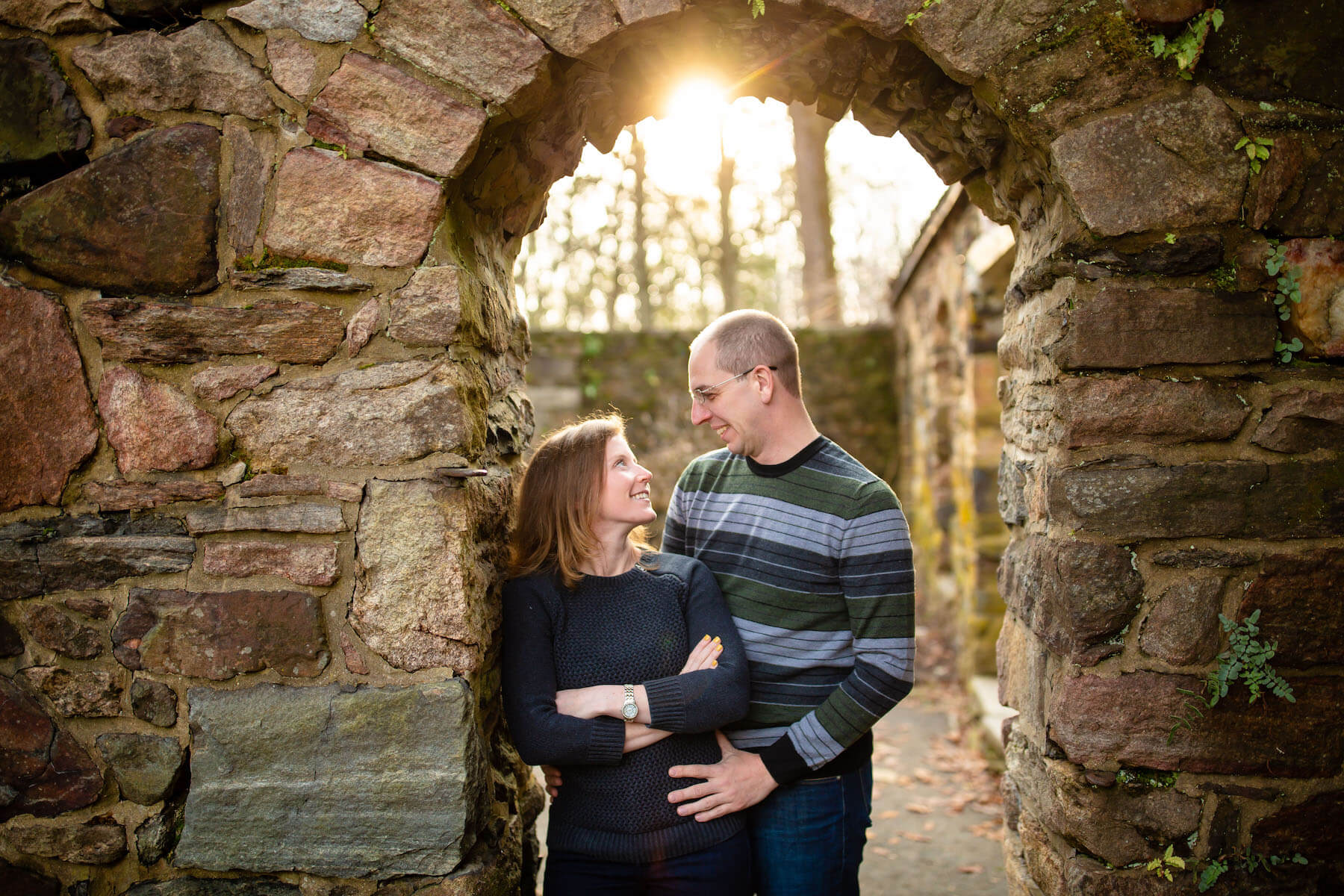 On the stretch of parks along the Delaware River known as Penn’s Landing, where Race Street meets Columbus Blvd., right on the feet of Benjamin Franklin Bridge, is Race Street Pier, a modern waterfront park built on an old pier. Inaugurated in 2011, the design of this space pays tribute to its original functionality. The project maintained the upper level and turned it into a sky promenade. In contrast, the lower levels became a recreation area with a pristine lawn, shady trees and a sitting area. Race Street Pier is popular with joggers, sunbathers and lunch breakers on weekends and weekdays. Everyone is drawn by the unmatched views of the skyline, the Benjamin Franklin Bridge and Camden, the city on the other side of the river in New Jersey. Spending an afternoon on this spot picnicking and people-watching will make you feel like a true Philadelphian.

Another trendy pier in town right beside the Race Street Pier is the Cherry Street Pier, a place turned into a multifunctional space for art studios, galleries, flea markets, one of the best places to take photos in Philadelphia and even a beer garden. This is another spot with a wonderful atmosphere where you can enjoy a drink and take amazing pics. The nearby Blue Cross RiverRink provides the perfect landscape for skating in winter and spaces for outdoor roller skating, mini golf and other activities during summer. ​​🌞 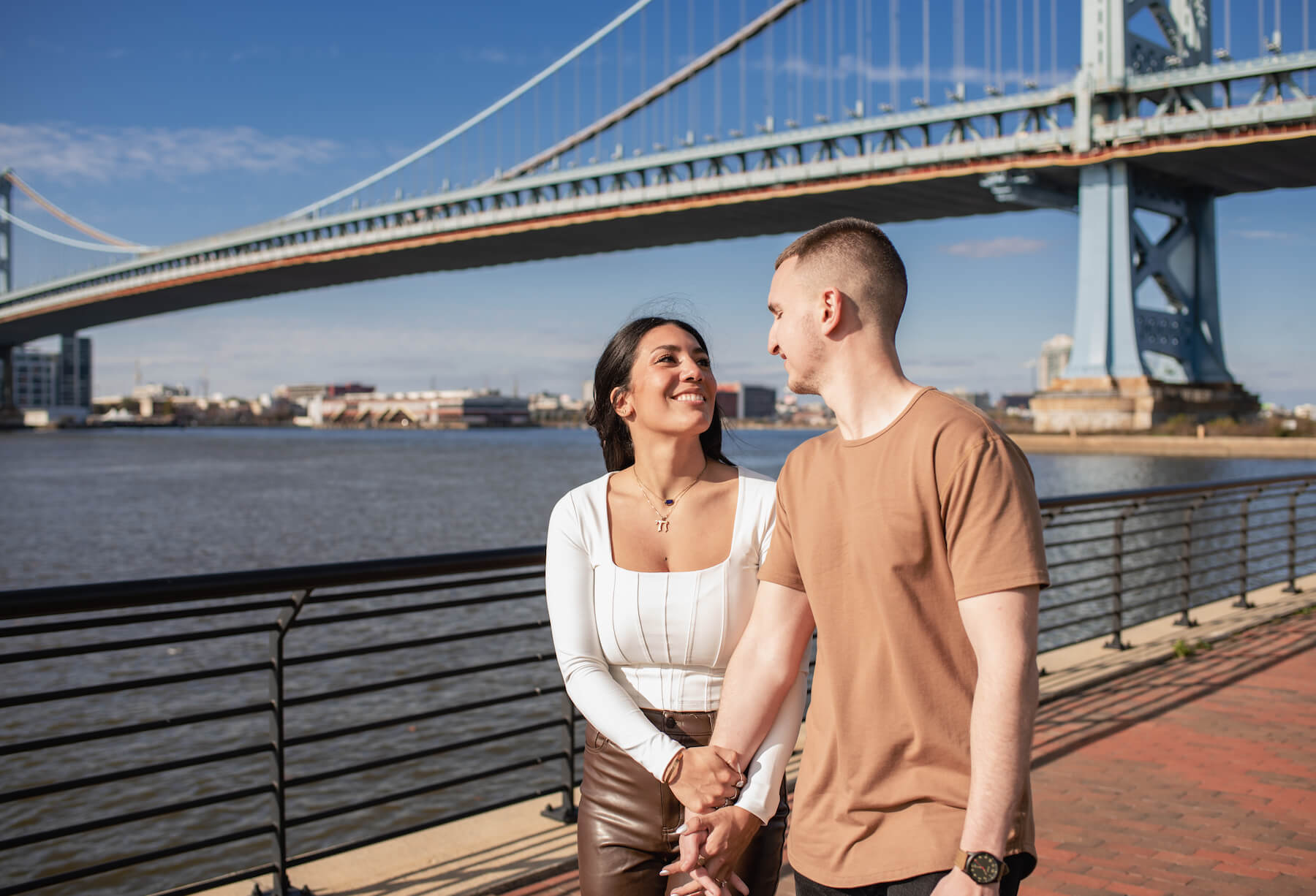 There’s so much to see in Philadelphia that it makes sense that most Americans cherish this city so much. For more architectural wonderment, check the 30th Street Train Station near the South Street Bridge, an impressive building in Classical Revival. Don’t miss the modern vibes of Cira Green, another delightful urban park with stunning city views. Foodies will love the Reading Terminal Market, one of the nation’s oldest and largest public markets. If you think you’ve had enough to eat for the day, Geno’s Steaks will change your mind. Legend has it that they serve the city’s best cheesesteak. 🧀 For a delightful day trip, drive to the Longwood Botanical Gardens, a hidden gem about an hour’s drive from Philadelphia.

For more on what to do, read these tips from our community of travellers. To make your trip to Philly even more remarkable, book one of our local Flytographers and let them capture all the fun the city has to offer. 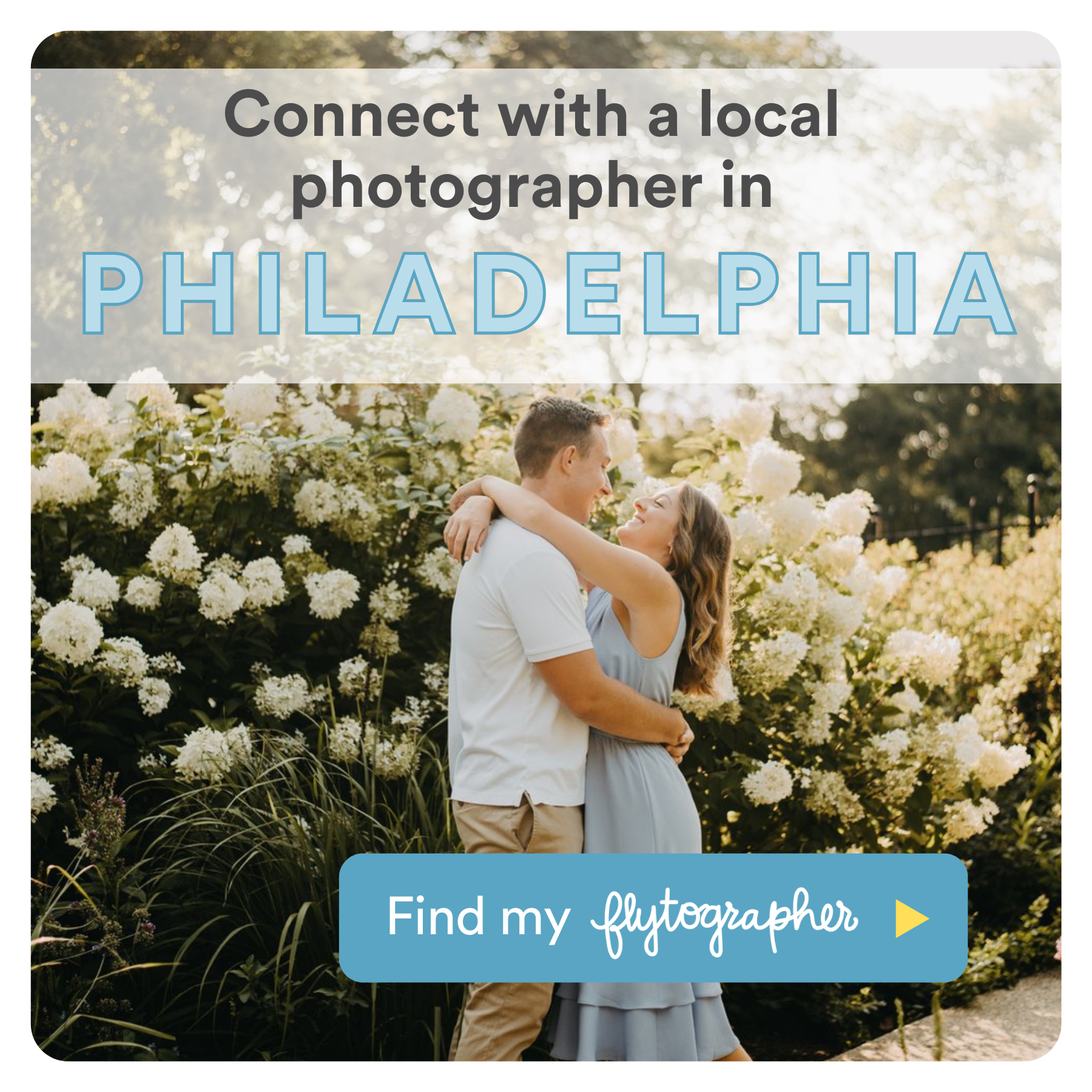 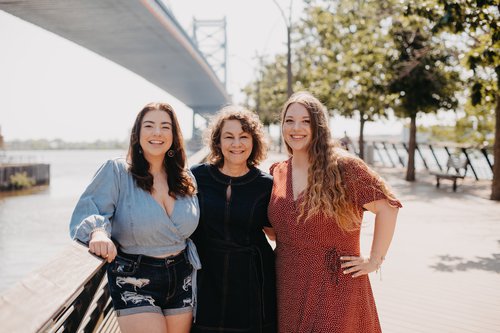 “Elizabeth was absolutely incredible. We had such a fun time during the photoshoot with her, but then of course got so much more out of it: stunning photos and even wonderful coffee shop recommendations that helped us finish our day in Philly after the photoshoot. We truly had an unforgettable experience with her and would recommend her to anyone.” 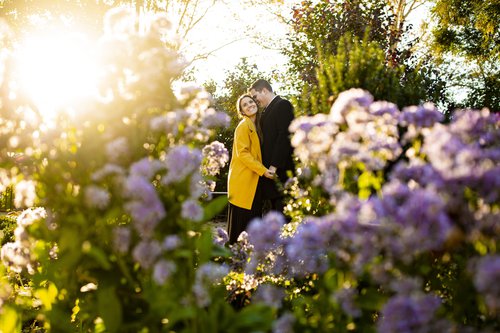 “The most magical experience with this dynamic duo. Matt & Grace provides the most wonderful experience and instantly made us feel comfortable. It was no surprise to find that our photographs turned out to be unbelievable and now are hanging up all over our home. We are definitely planning to have our love captured by these two in the future.” 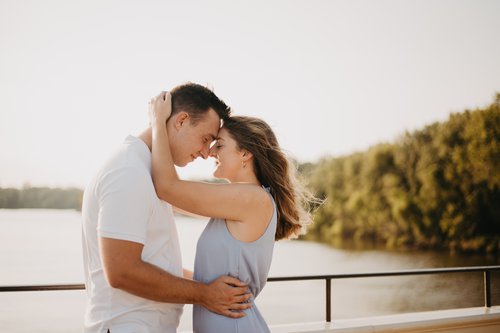 “Elizabeth was amazing! Super knowledgeable about the area and what backdrops looked the best. She made us feel really comfortable, especially my fiancé who usually hates taking photos :)”