The cultural centre of Bavaria, Munich, is a vibrant city full of things to explore and is one of the most beautiful cities in Germany. From world-class museums to beer halls to beautiful gardens, Munich offers a little something for everyone. Most notably, it is home to the world-famous German festival, Oktoberfest. With all of this to offer, there are countless spots to capture memories in Munich.

Here at ​​Flytographer, we easily connect people with trusted photographers for fun photo shoots and have captured over three million memories worldwide. Today, we asked our local photographers in Munich to show us the best photo spots for pictures. Read on for the ten best places to take photos in Munich. 📸 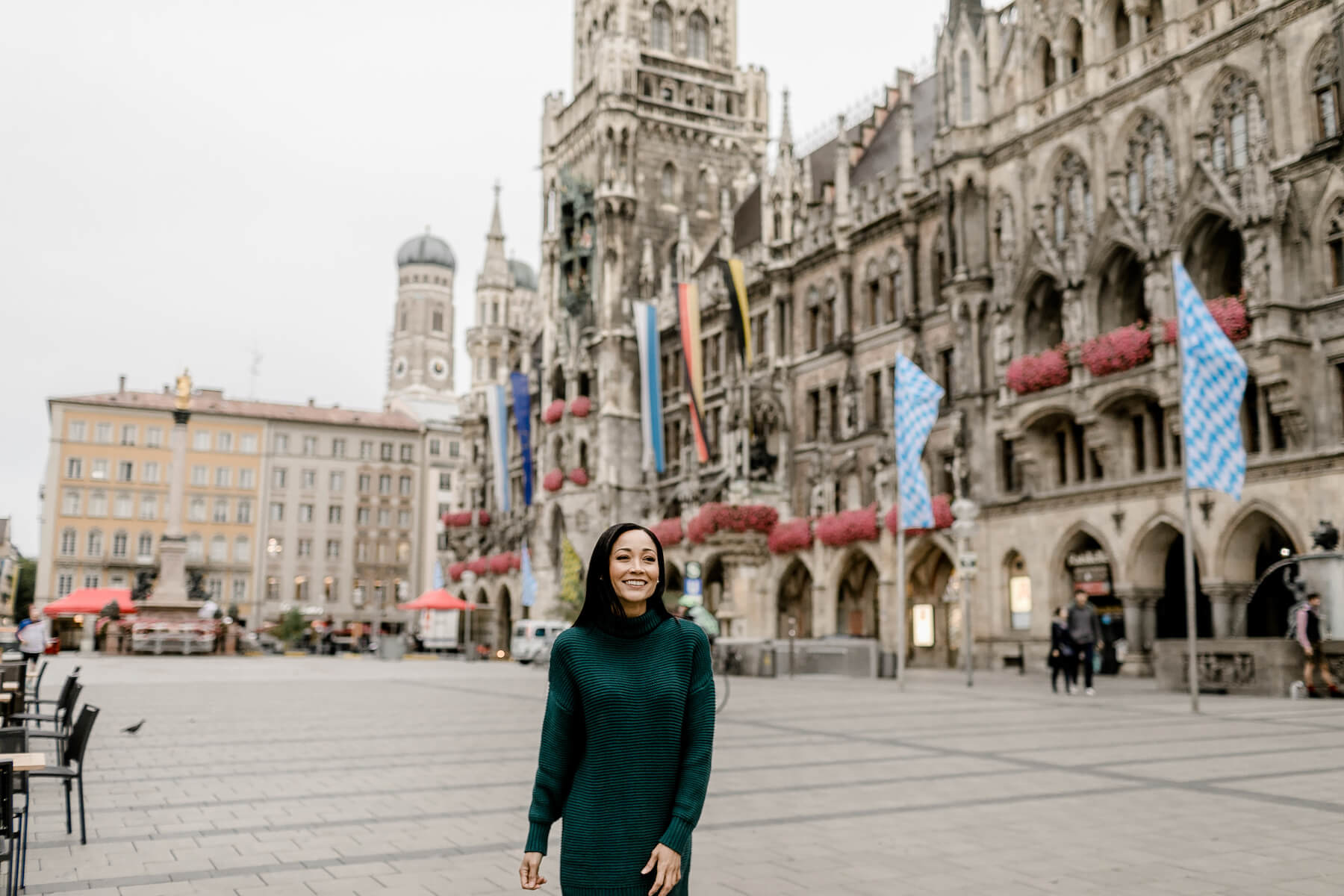 Photo: Gloria in Munich for Flytographer. Kristina captures a day in Munich at the Old Town with a solo photoshoot.

Located in the heart of the Old Town, Marktplatz Leipzig is the historic centre of Munich. The beautiful public square is bordered by stunning architecture from the Middle Ages. Historic buildings are home to various museums, eateries, and shops, lending the area a vibrant, bustling energy that will captivate you the moment you arrive.

At the northern end of the square, you’ll find entertaining businesses perfect for enjoying the city’s nightlife scene — cocktail bars, wine cellars, jazz lounges, and more. This is a fabulous place to end the day after wandering through the Old Town. 🍸🎷

💡Travel tip: If you’re travelling during the holiday season, Marktplatz Leipzig is the site of Munich‘s incredible Christmas Market — a must-do experience! ✨ It’s also one of the most Instagrammable places and activities in Germany. 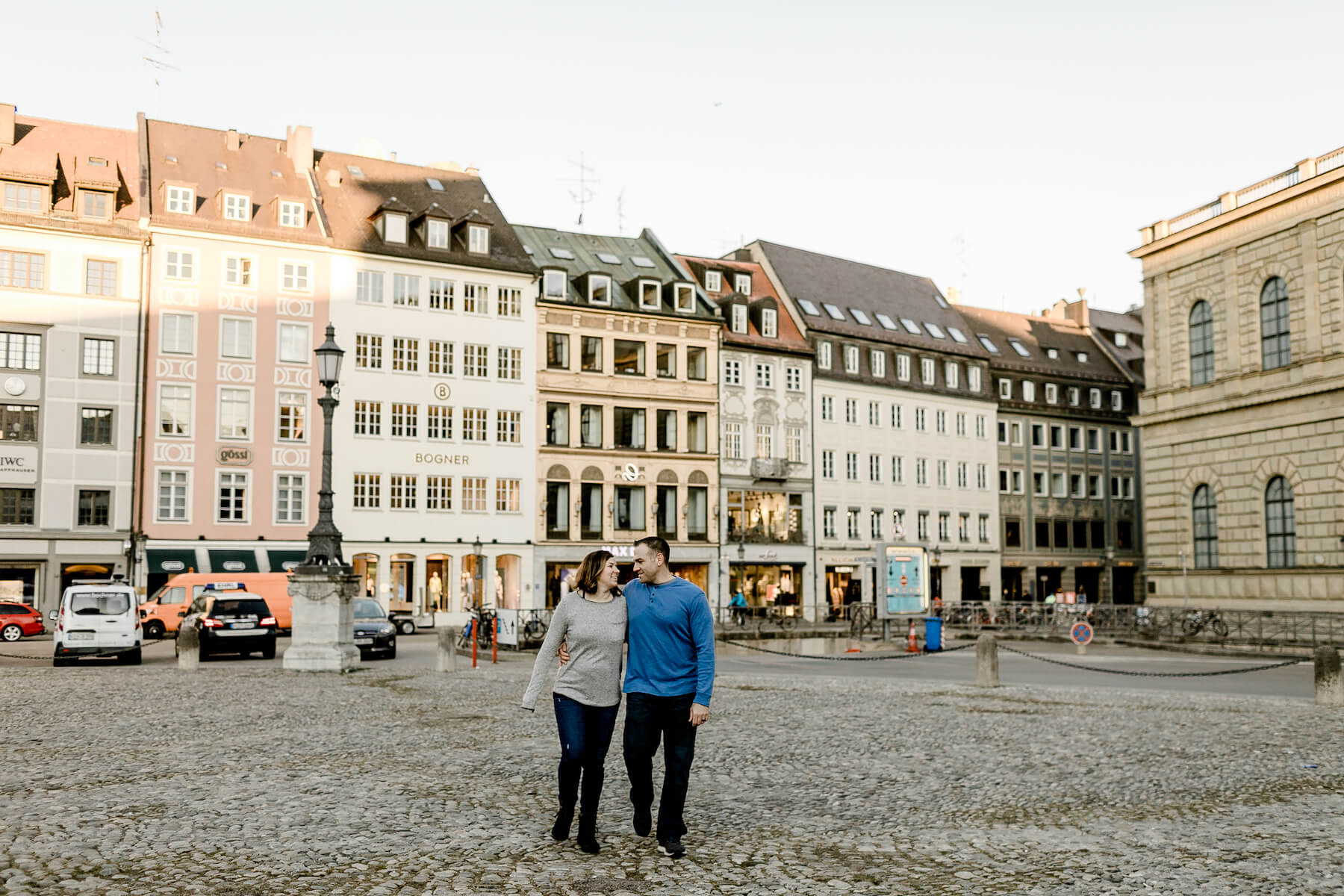 Photo: Gloria in Munich for Flytographer. Sarah and partner capture their honeymoon together in Munich at the Marktplatz Leipzig with a couple photoshoot.

The most visited part of the street is the famous Von-der-Tann-Strasse, just on the edge of the Old Town. Flanked by beautiful Finanzgarten on one side and picturesque row houses on the other, this is a lovely place to slowly wander your way through.

Just around the corner, you’ll find Odeonsplatz and Munich Residenz, one of the most Instagrammable locations in the city! The larger, 19th-century square is bordered by ornate buildings with Roman influence — a picturesque scene which is perfect to capture memories in Munich. 📸 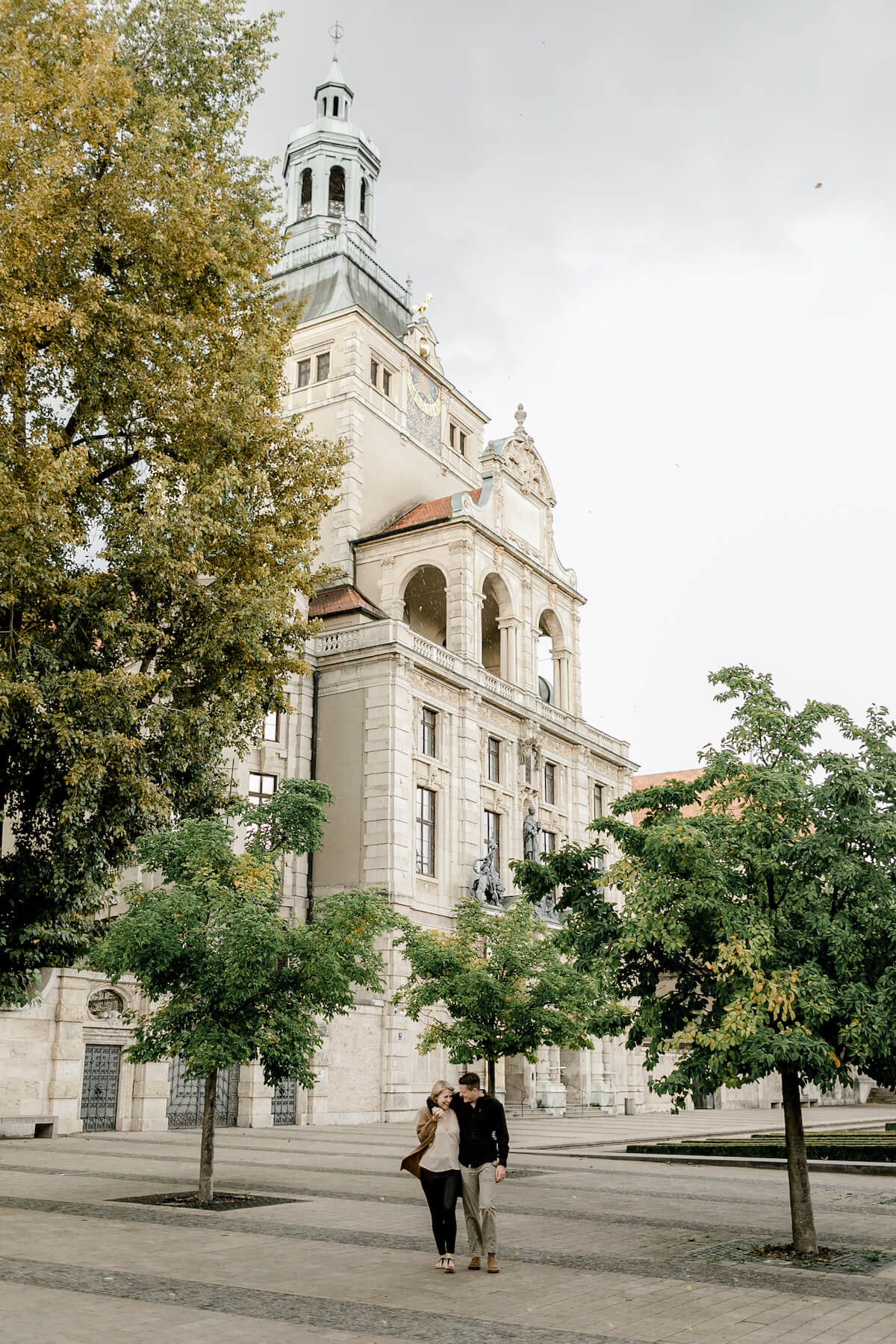 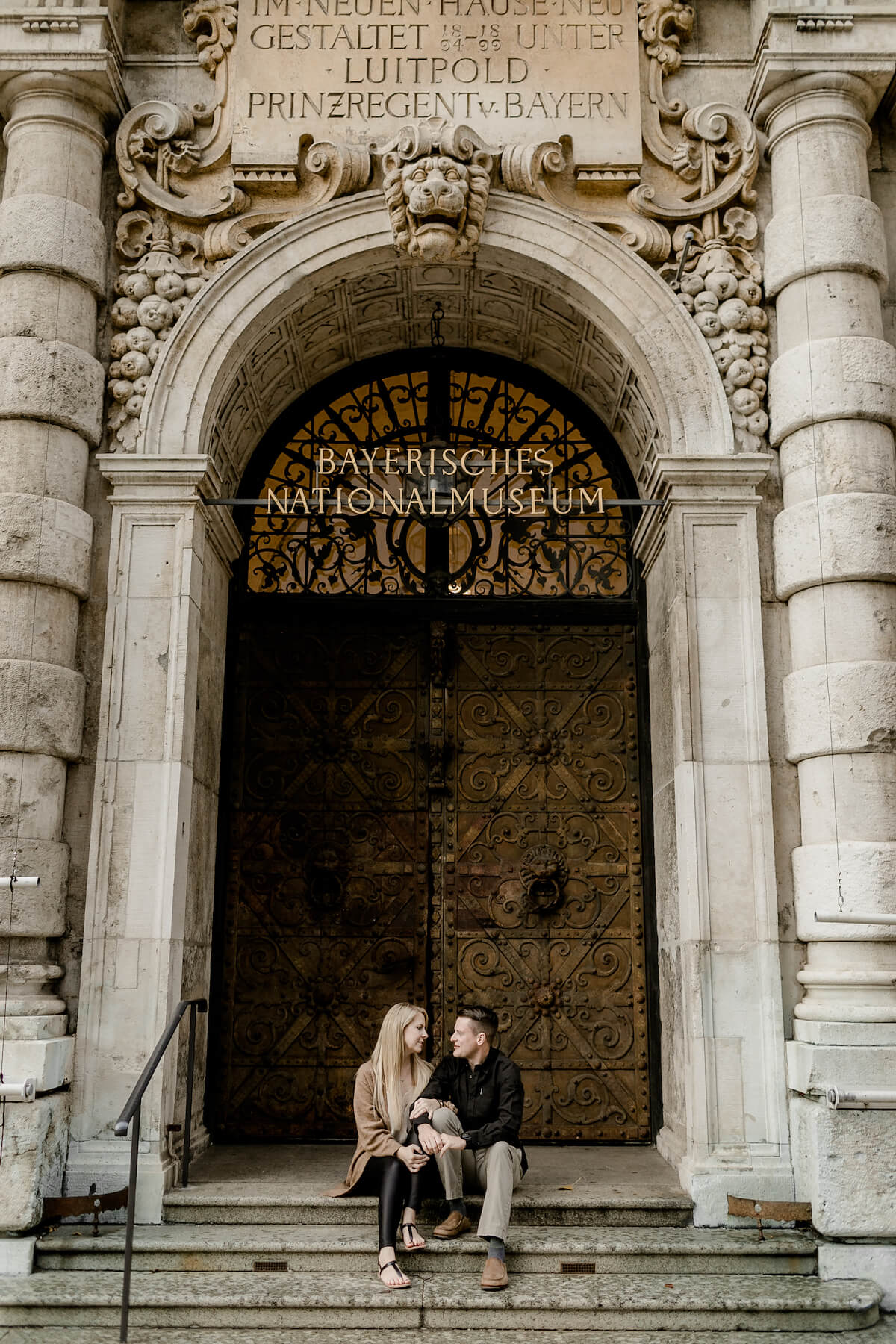 Photo: Gloria in Munich for Flytographer. Rebecca and family capture their family trip together in Munich at the Prinzregentenstraße with a family photoshoot. 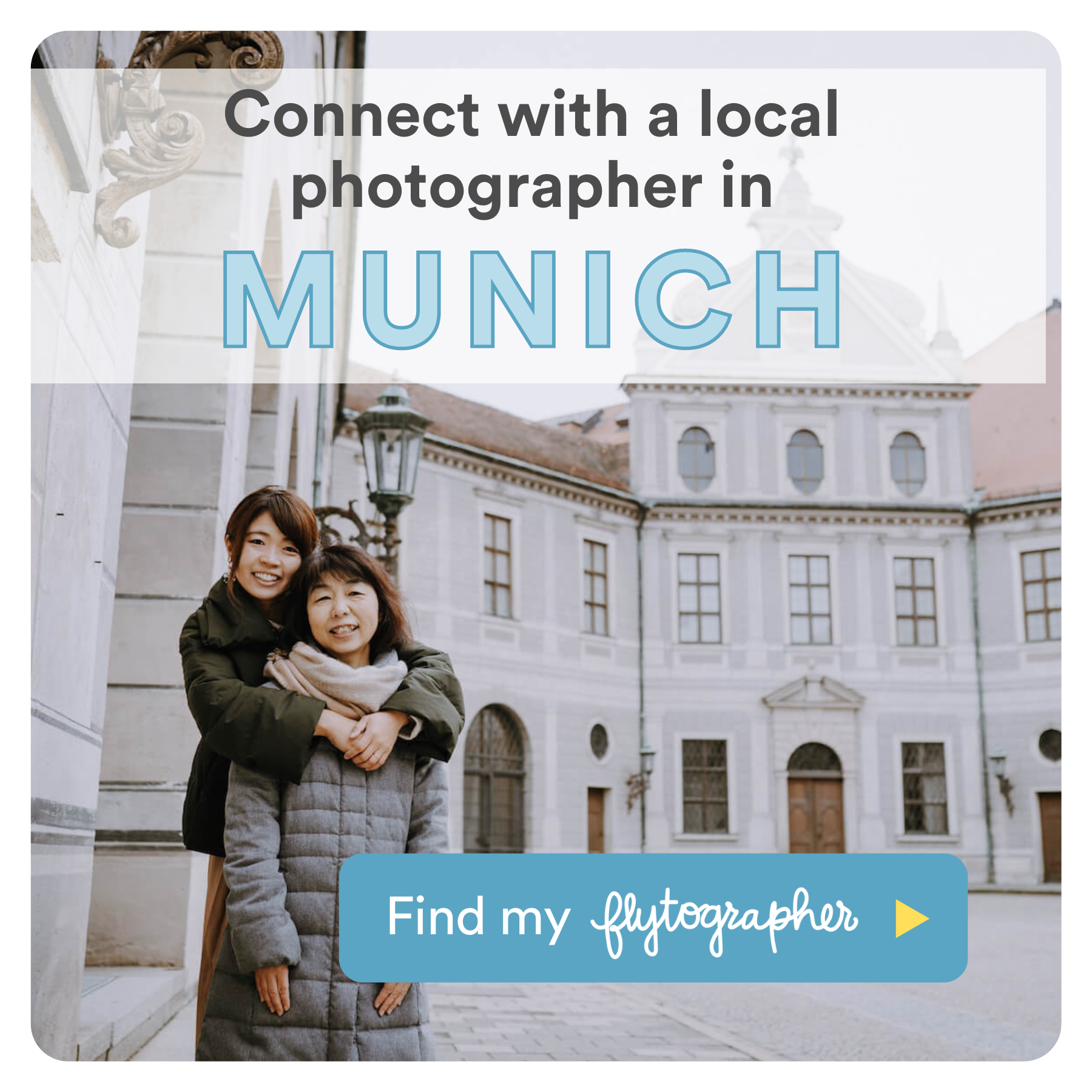 Perhaps the most famous landmark in all of Germany, Neuschwanstein Castle, makes for an excellent day trip from Munich, a two-hour drive away. Around 1.4 million people visit the castle every year! 😮

King Ludwig II built Neuschwanstein Castle as a retreat from public life. His goal was to create a show-stopping scene that would provide an opportunity to romanticize the Middle Ages. And King Ludwig certainly met his goal!

This stunningly gorgeous castle is straight out of a fairytale. 🏰 Idyllicly set atop a dramatic mountainside, the castle shines with its white stone walls and turrets towering toward the sky.

For the best views of the castle, head toward Marienbrücke, a nearby bridge. This is an ideal photo location to get the most beautiful pictures of your time at Neuschwanstein Castle.

💡Travel tip: Visitors can only access the castle via a guided tour, so be sure to purchase your tickets ahead of time. 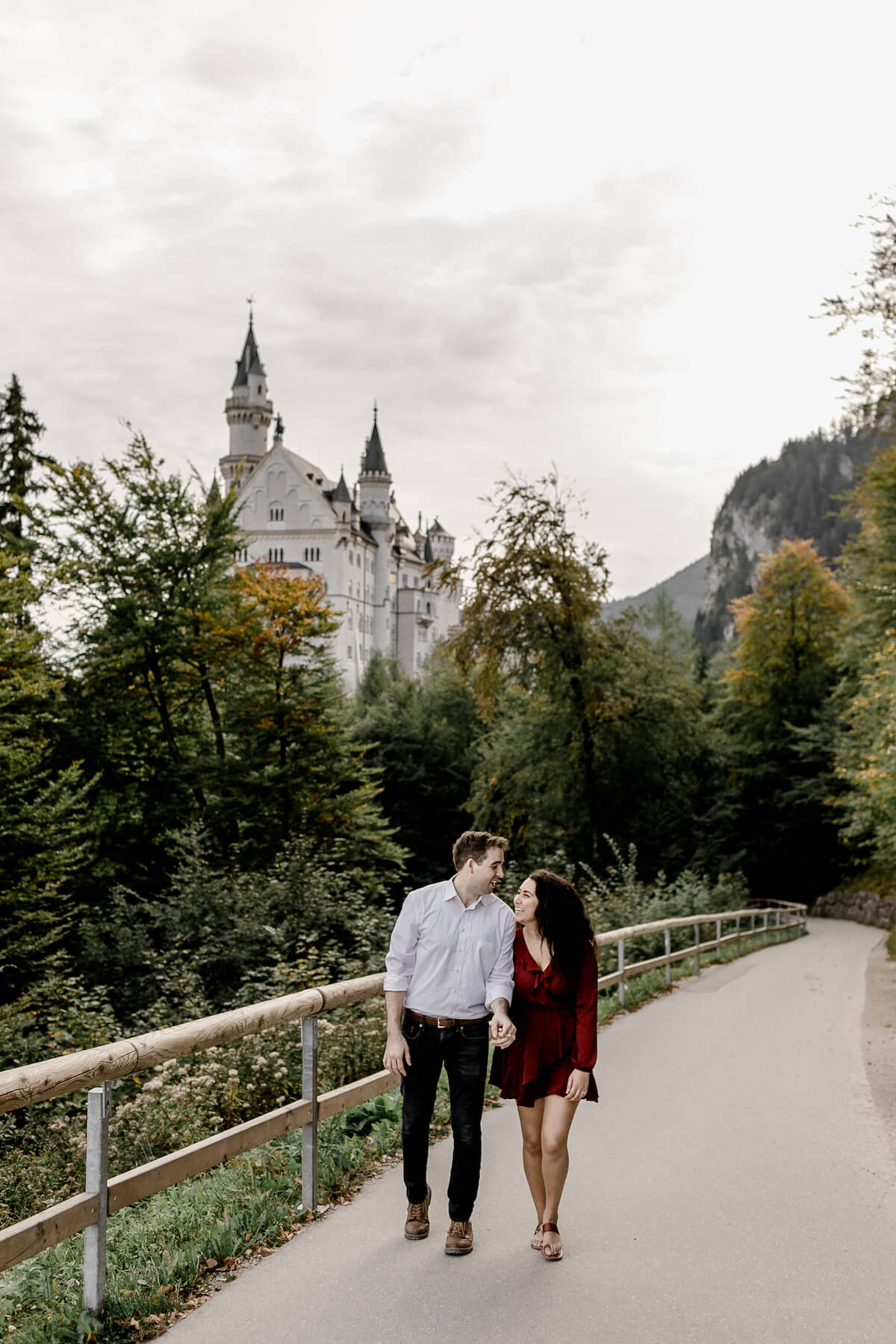 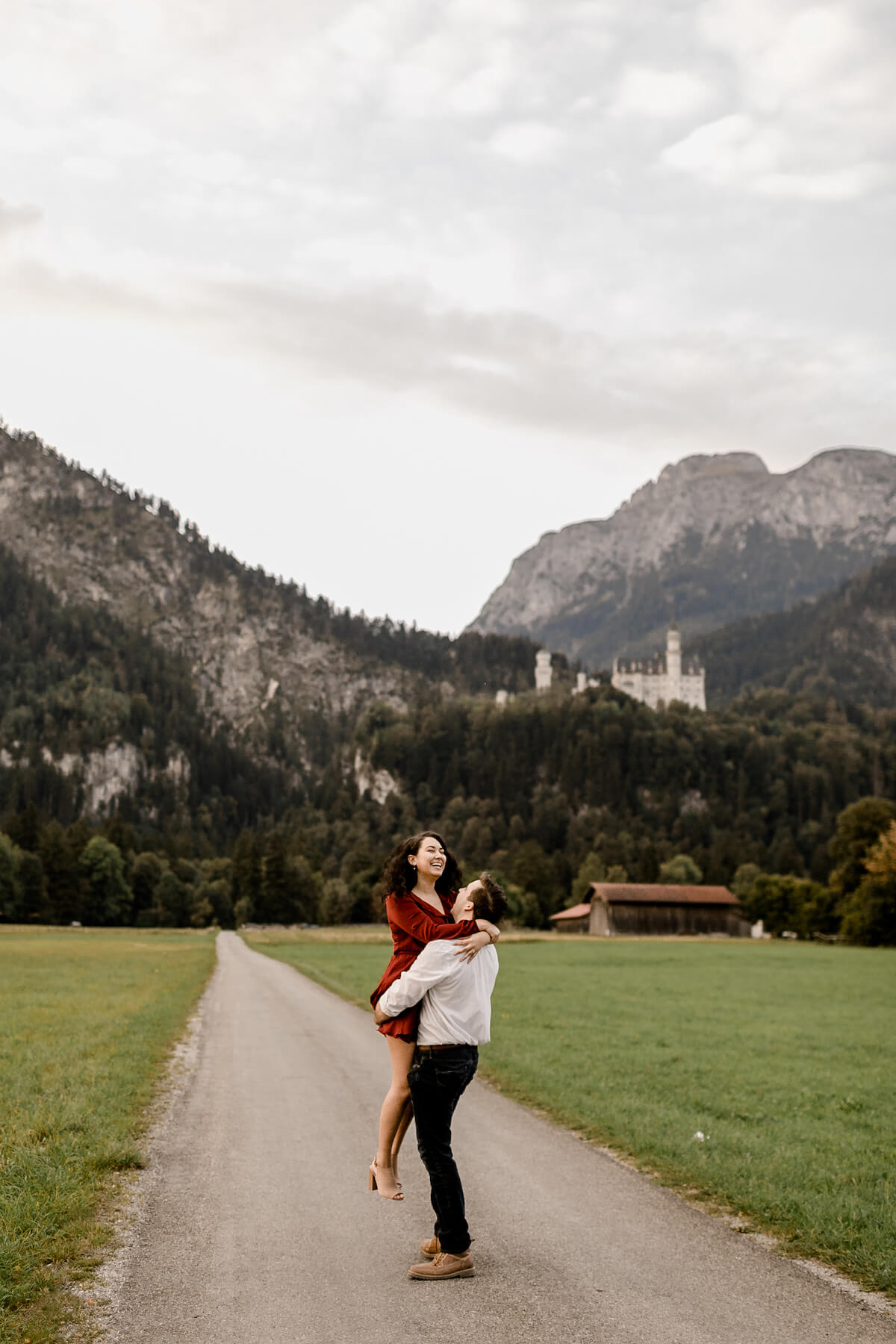 Photo: Gloria in Munich for Flytographer. Matt and partner capture their engagement in Munich at the Neuschwanstein Castle with a proposal photoshoot.

Schloss Nymphenburg — also known as Nymphenburg Palace — is one of Munich’s top attractions. And when you visit it, you’ll quickly understand why! The palace showcases royal splendour in all its glory, with small castles throughout the sprawling grounds, ornately decorated interiors, and of course, the impressive Baroque-style palace building. 🤩

After the English Gardens, Nymphenburg Palace park is the largest park and one of the most beautiful places in Munich — meaning there are plenty of places to capture beautiful pictures. Small streams, canals, footbridges, winding paths, and lakes can be found throughout the park, making it feel like a magical fairytale forest waiting to be explored. 🌲💫

For one of the best views, visit the west side of the gardens. With the fountains, symmetrical gardens, and majestic palace in the background, this postcard-perfect spot is one of the best places to take photos in Munich.

Photo: Julia in Munich for Flytographer. Rafael and partner celebrate their engagement in Munich with a proposal photoshoot.

Marienplatz is Munich’s primary square and is the heart of the city — both geographically and culturally. In fact, it has been Munich’s main city square since 1158! Full of energy, there is always something happening at Marienplatz, whether it’s the Glockenspiel, Christmas Market, or other celebratory events and holidays.

With such a long history, Marienplatz is bordered by historical buildings with different architectural styles, such as the Baroque-style St. Peter’s Church or neo-Gothic Neues Rathaus — New Town Hall. The 14th-century Old Town Hall still stands today, with Gothic updates after being destroyed during World War II. Needless to say, the variety of buildings creates an interesting and beautiful backdrop for photos! 📸

For sweeping views of downtown Munich, climb to the top of St. Peter’s Church tower. From there, you’ll have a 360-degree panoramic view of the city, including Isar River, Munich Residenz, Justizpalast, and other iconic Munich landmarks. 🏙️

💡Travel tip: Marienplatz is the perfect launchpad for exploring Munich, as it is well-connected to the city’s public transportation system, the U-Bahn. 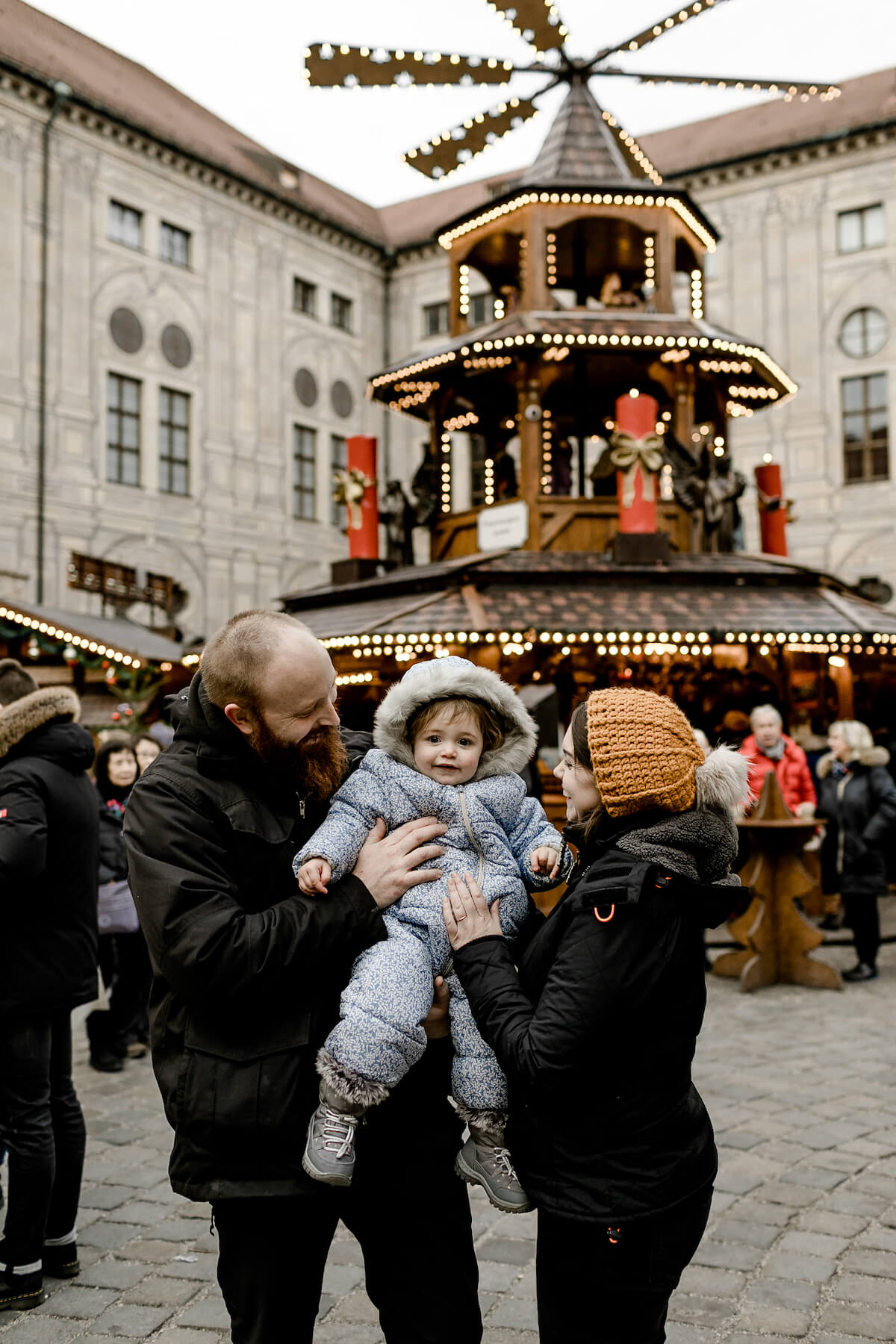 Photo: Gloria in Munich for Flytographer. Rachel and family capture a trip together in Munich at the Marienplatz with a family photoshoot. 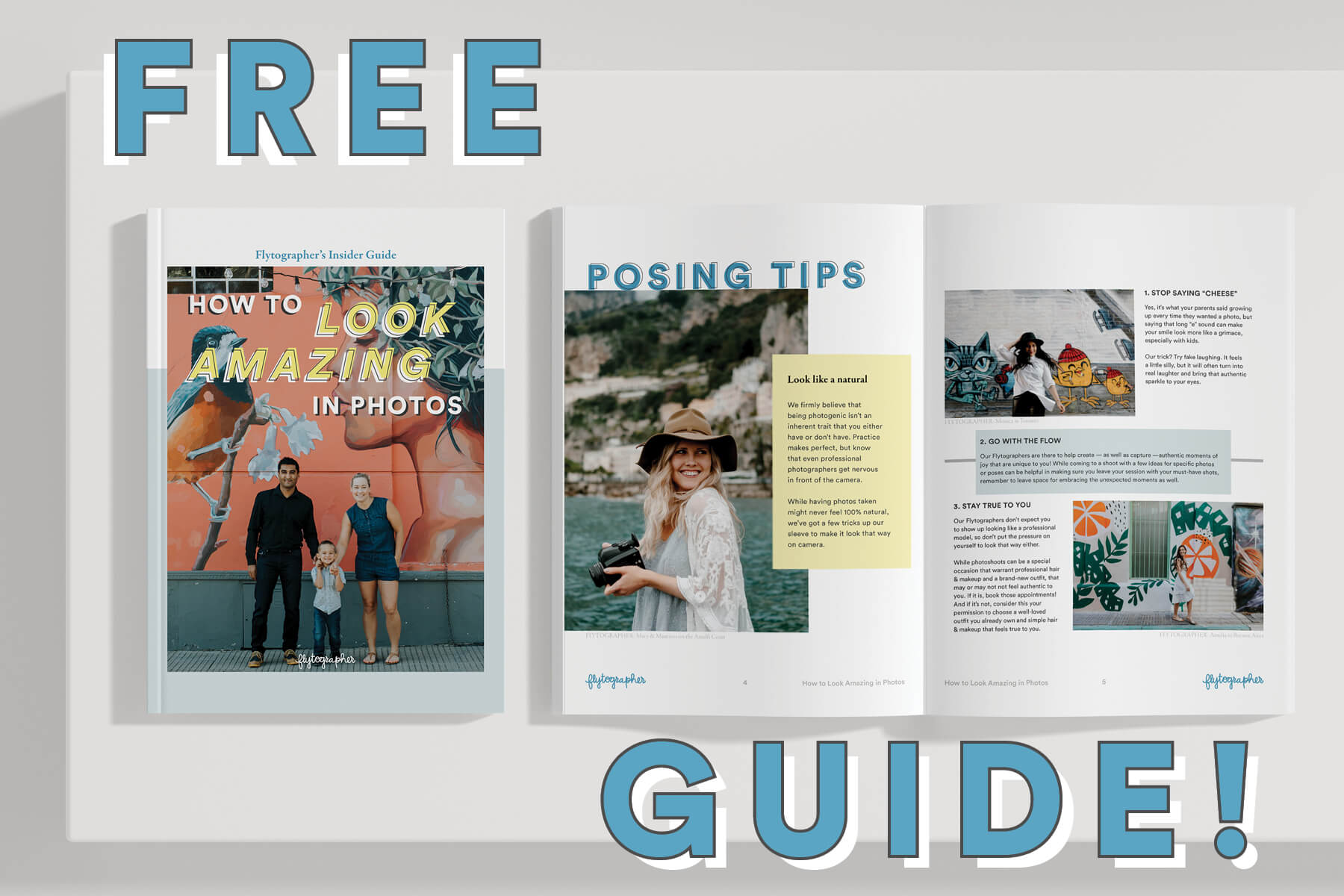 St. Paul’s Church is located on the northern end of Theresienwiese and is a perfect place to capture memories in Munich— the sight of Oktoberfest! The church is built in a neo-Gothic style and designed by the same architect who designed New City Hall on Marienplatz, Georg Ritter von Hauberrisser. ⛪

Standing at 97 meters, St. Paul’s Church is one of Munich’s tallest towers. This makes it the perfect place to enjoy some of the city’s best views. However, the tower is only open to the public during Oktoberfest, so it’s best to plan a visit to the tower during this time of the year! 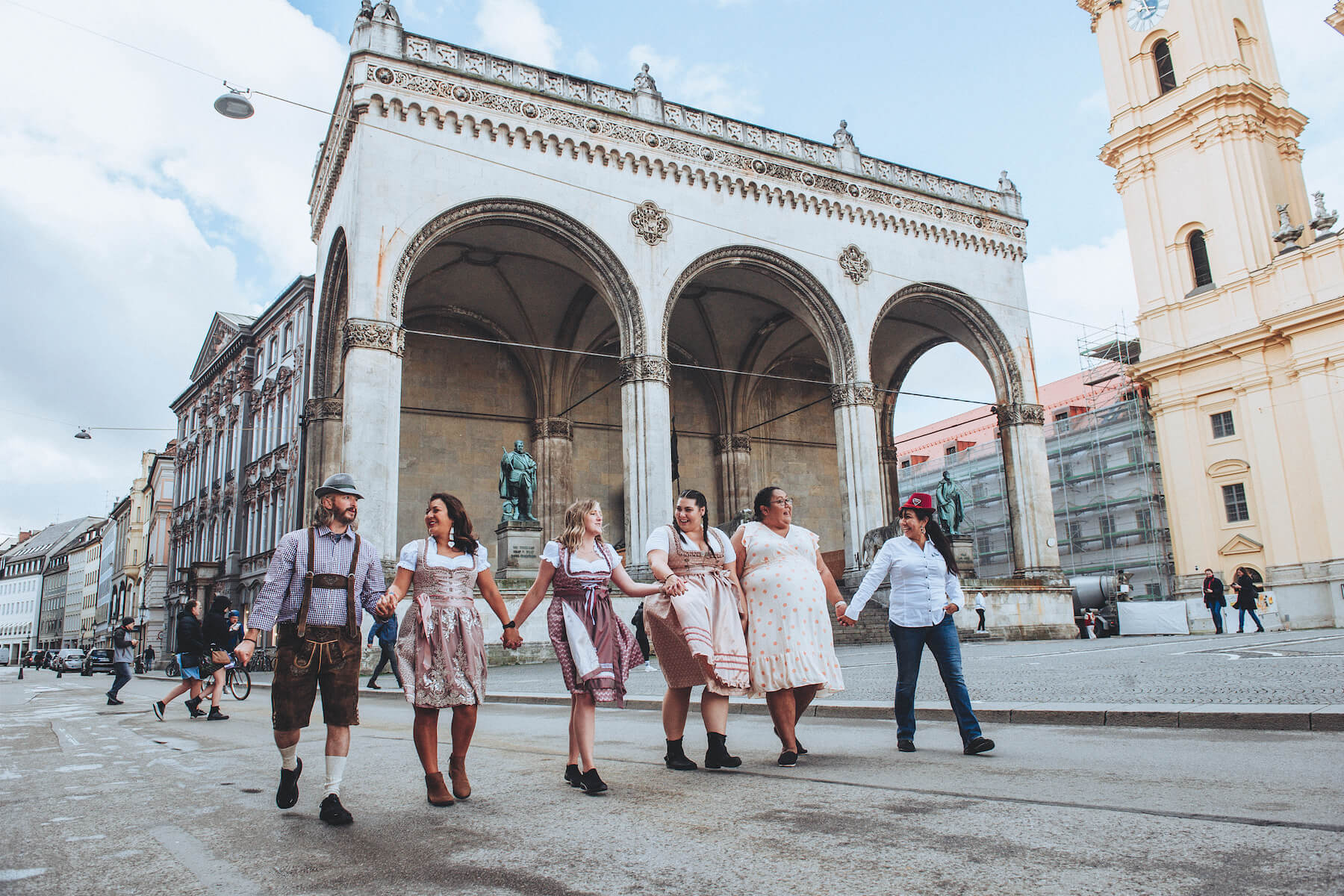 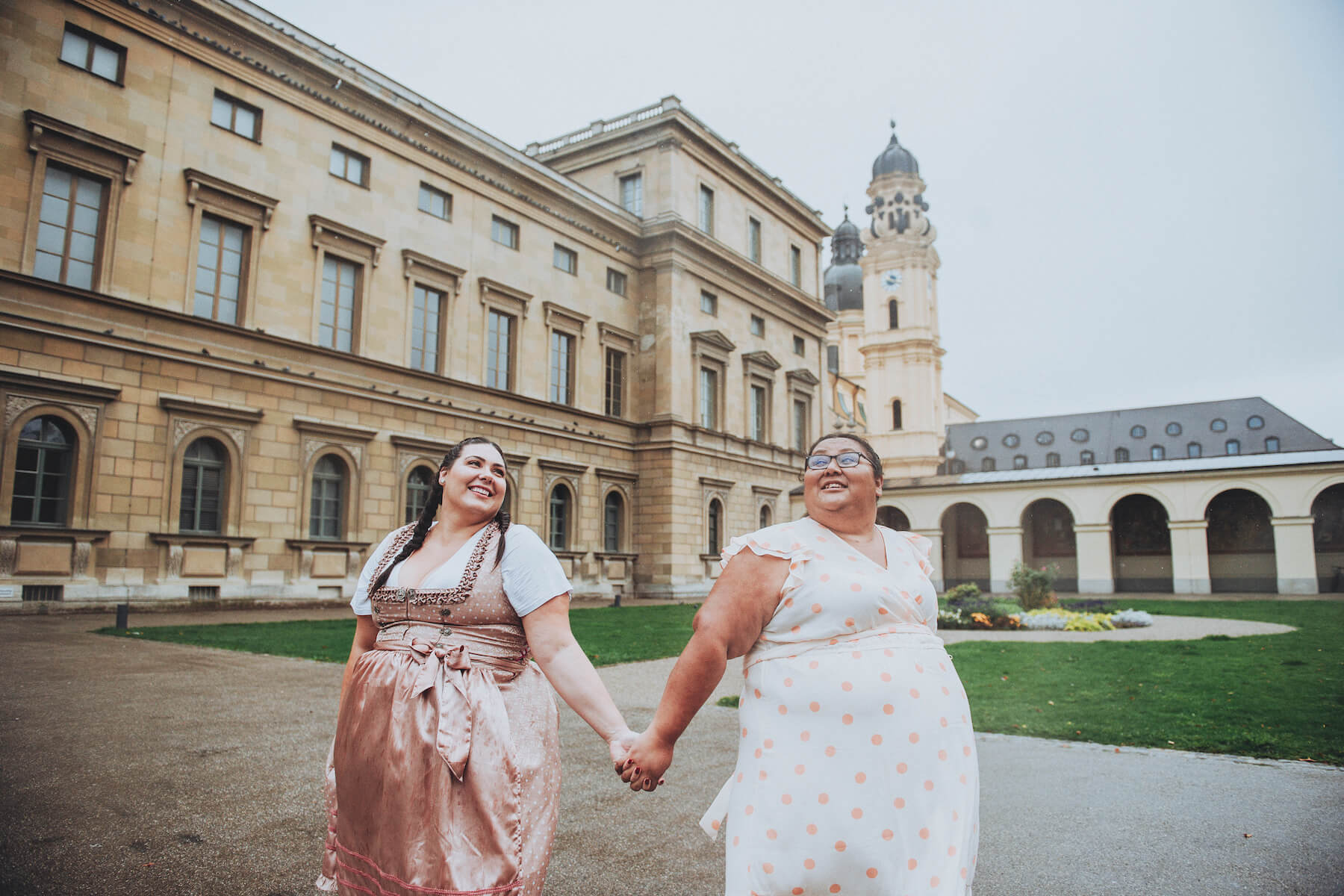 Photo: Marina in Munich for Flytographer. Sadie and friends spend a beautiful day together in Munich with a friend photoshoot.

Bavaria Park is one of Munich’s hidden gems, perfect for those who enjoy exploring off-the-beaten-path. Located just outside the Westend district’s city centre, the lush green space is a popular leisure destination for Munich’s locals. Depending on the time of year, you’ll find picnickers, joggers, walkers, and sports enthusiasts enjoying the park’s amenities.

Follow the winding paths through oak tree groves to discover the many sculptures hidden throughout the park. Crafted in bronze and sandstone, the sculptures symbolize fantasy and are well worth exploring.

A unique feature of Bavaria Park is its beer garden! Enjoy a refreshing pint with various Bavarian snacks, including delicious freshly-made pretzels. A classic pairing! 🍺🥨 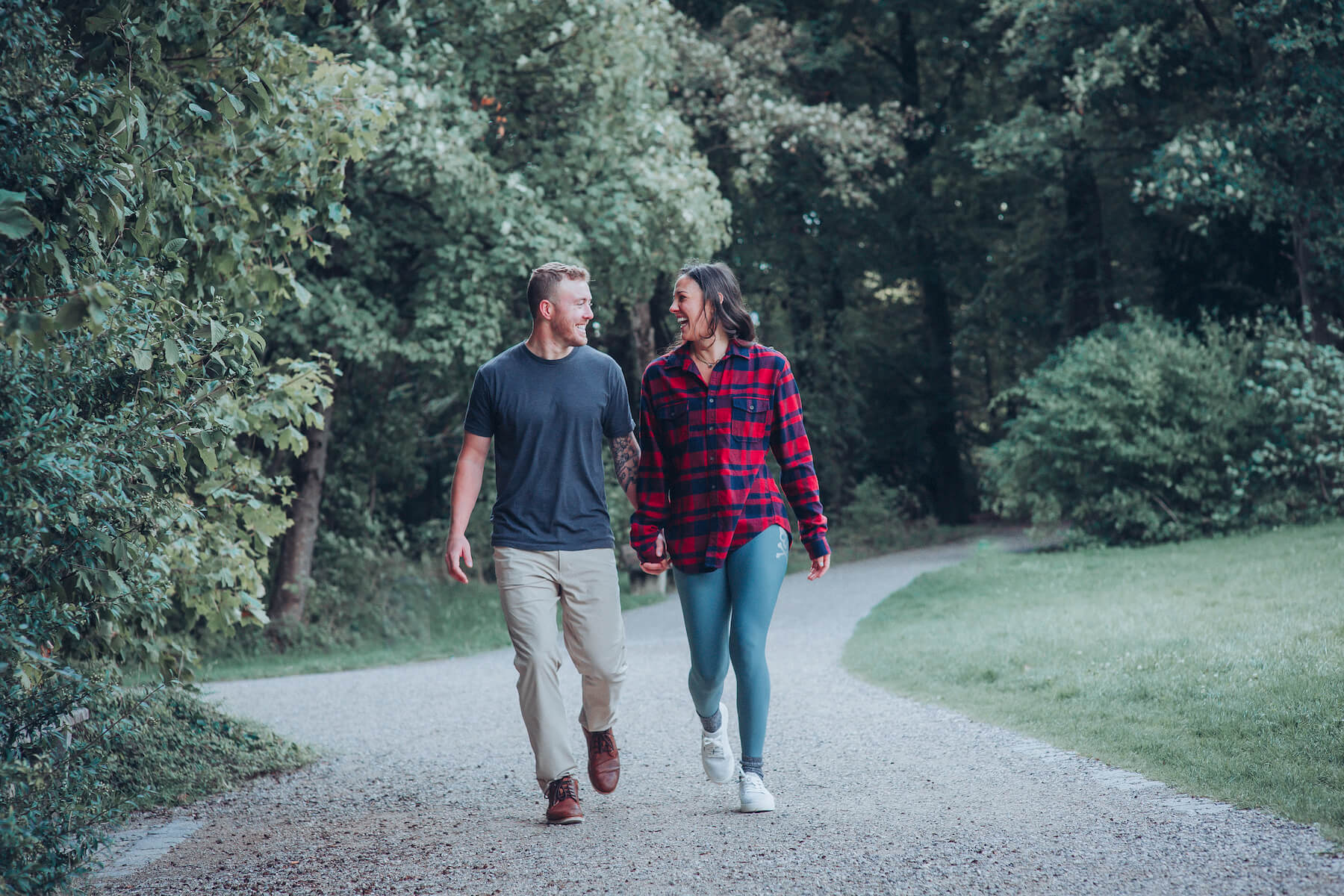 Photo: Marina in Munich for Flytographer. Nathan and partner enjoy their engagement in Munich with a proposal photoshoot.

Named after the former concert hall, the Odeon, Odeonsplatz is a lovely city square surrounded by grand historic buildings, including Feldherrnahalle and Theatinerkirche. The square also acts as a gateway to the popular Hofgarten and Dianatempel.

Italian Renaissance architecture is prominently featured here, making for a gorgeous place to capture memories in Munich. Feldherrnahalle, with three impressive archways and intricate stonework, is a fascinating spot to capture beautiful photos. 😍 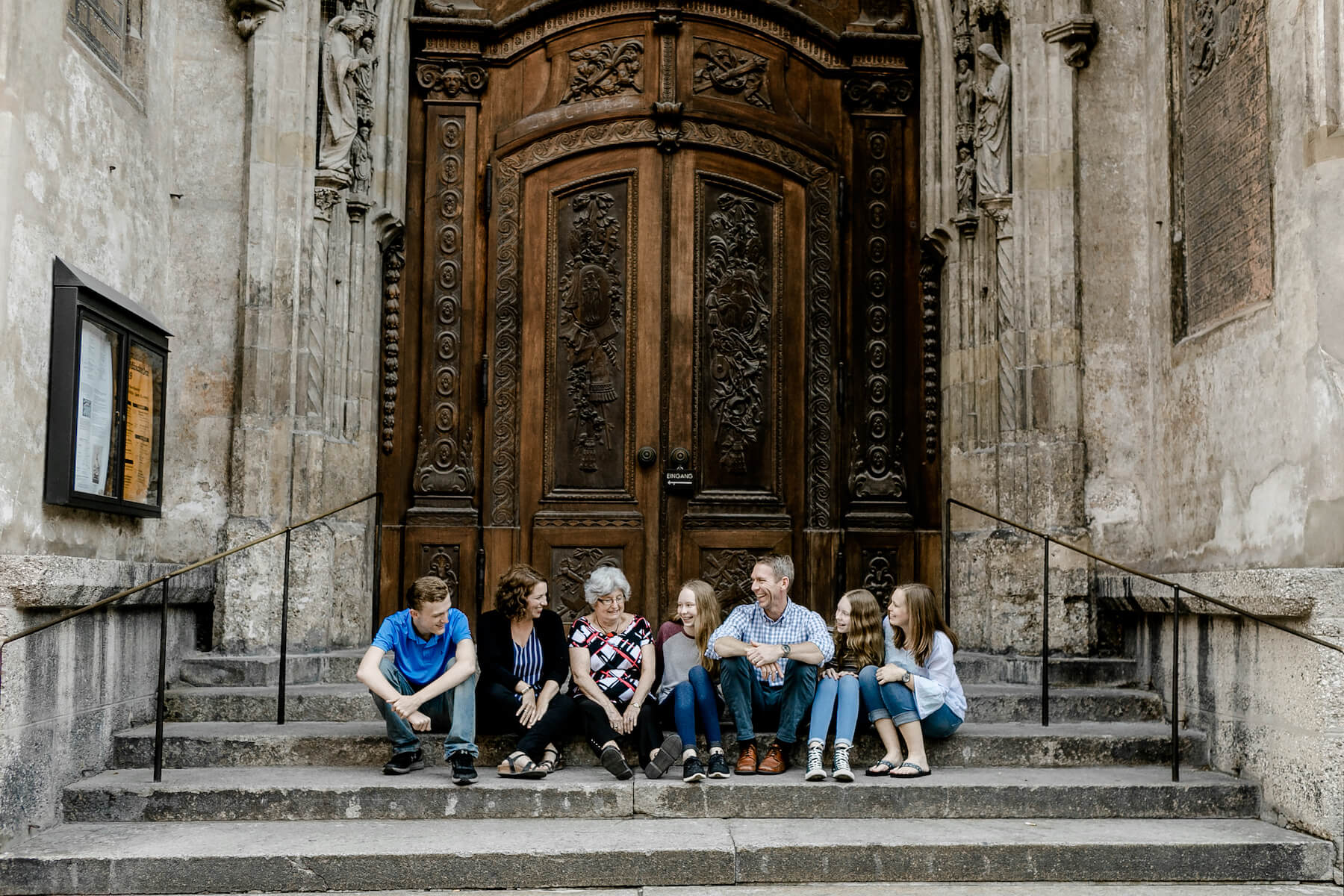 Photo: Gloria in Munich for Flytographer. Julia and family celebrate a trip in Munich with a family photoshoot.

The Hofgarten at Munich Residenz is an idyllic green park on the edge of Munich’s historic old town. Inspired by the Italian Renaissance style, the garden is a lovely, peaceful place where visitors can enjoy a reprieve from the bustling energy of the city while remaining within the city centre. 😌

At the heart of the gardens sits a pavilion known as Dianatempel. The twelve-sided gazebo is a charming place to take beautiful photos, with eight entrance archways and a bronze roof. For this reason, it is one of the most popular places to take photos in Munich!

If you’re lucky, you may catch a spontaneous classic concert at the pavilion — a dreamy moment you won’t soon forget. 🎼 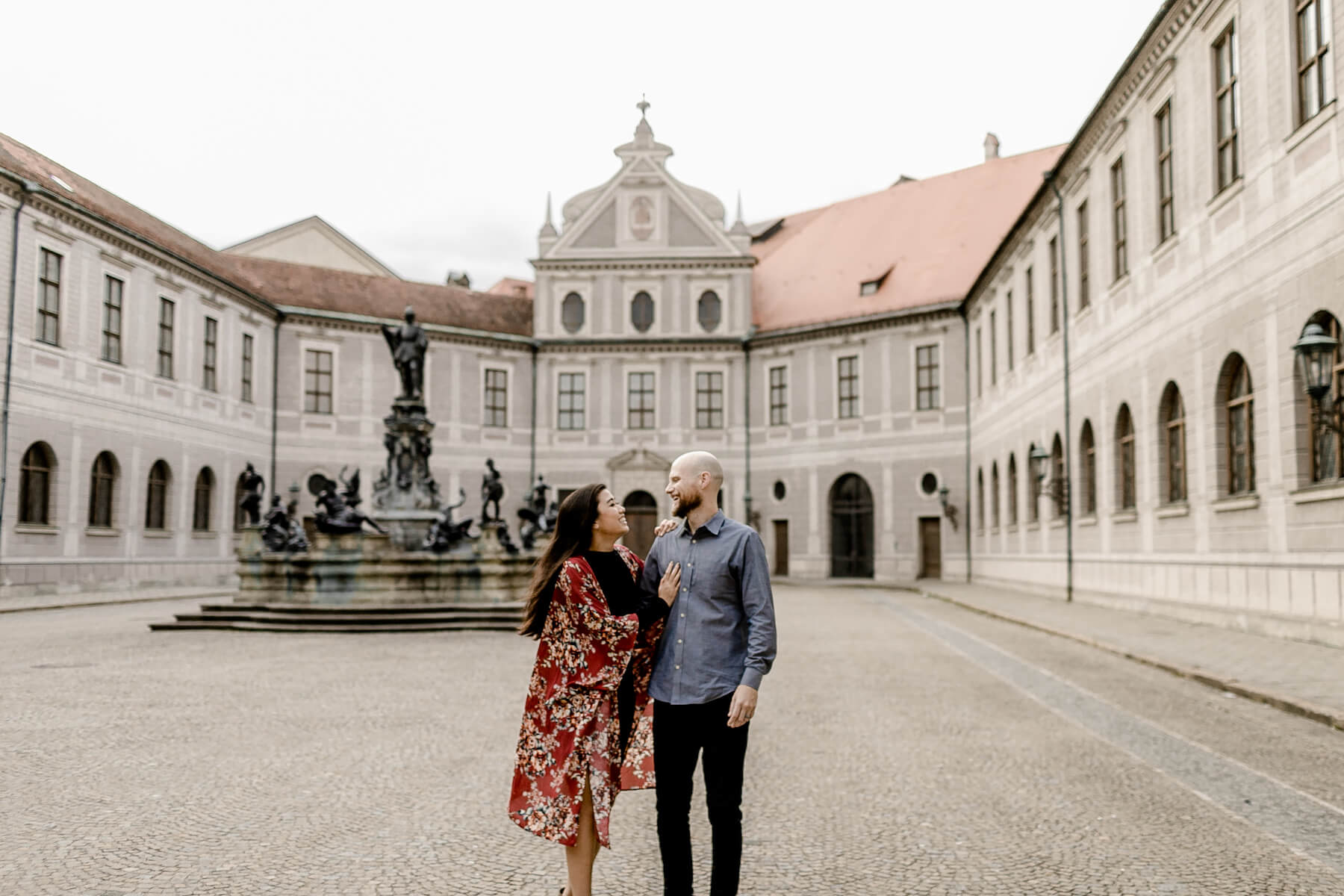 Photo: Gloria in Munich for Flytographer. Jennifer and partner capture their anniversary together in Munich with a couple photoshoot.

Max-Joseph Square is a large square situated alongside Munich Residenz in Old Town. Built in the early 19th century, it is one of Munich’s most visited areas. Many of the city’s major streets lead to Max-Joseph-Platz, making it one of Munich’s top community hubs. Fabulous restaurants, unique shops, and historical buildings surround the square, so be sure to take some time to explore all the area has to offer. 🛍️

Just around the corner, you’ll find the world-renowned tavern, Hofbräuhaus. Considered the birthplace of traditional Bavarian tavern culture, this beer hall is well worth a visit for those looking for a classic Bavarian experience! Cozy up with locals and visitors alike, where you’ll be certain to share a toast. 🍻 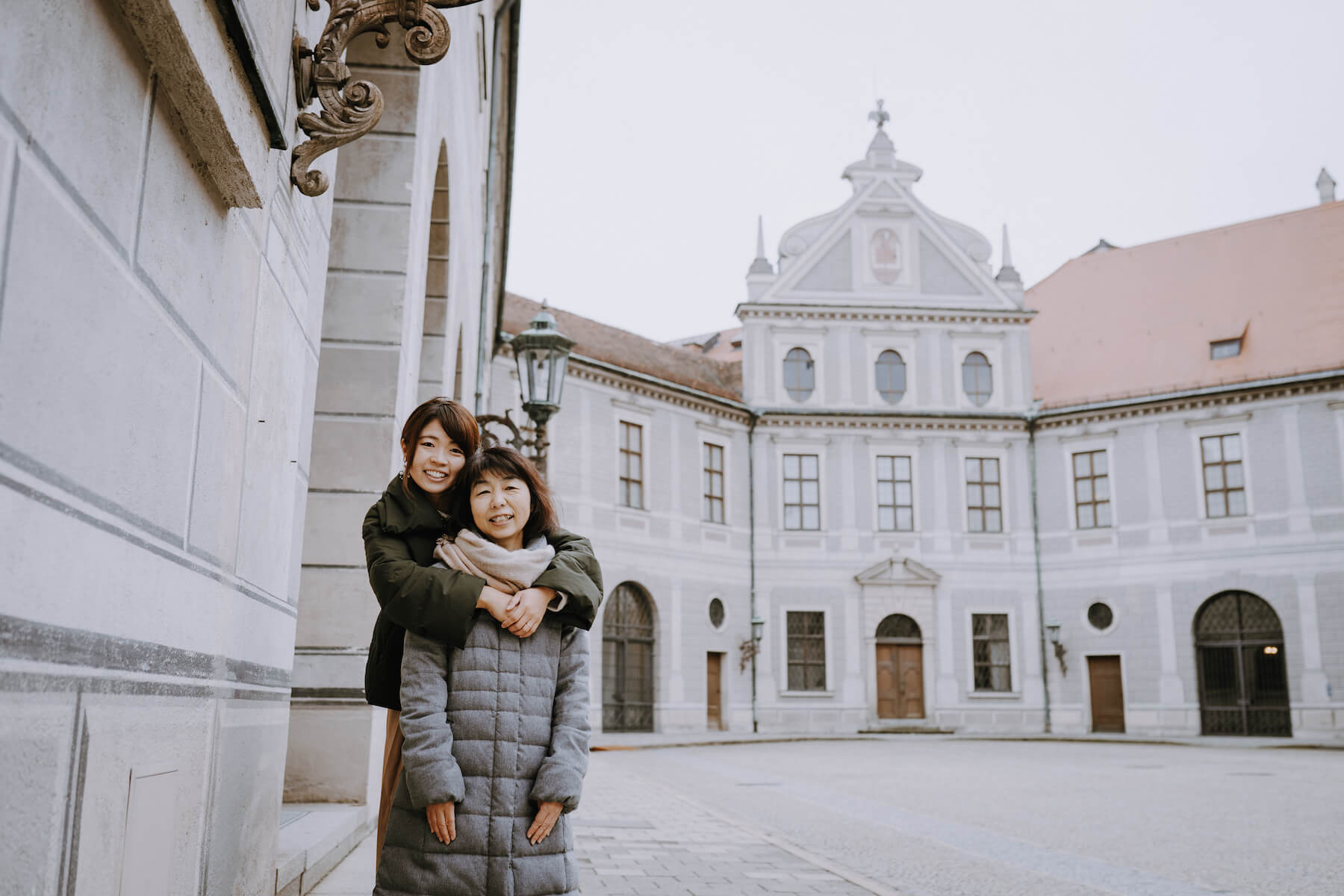 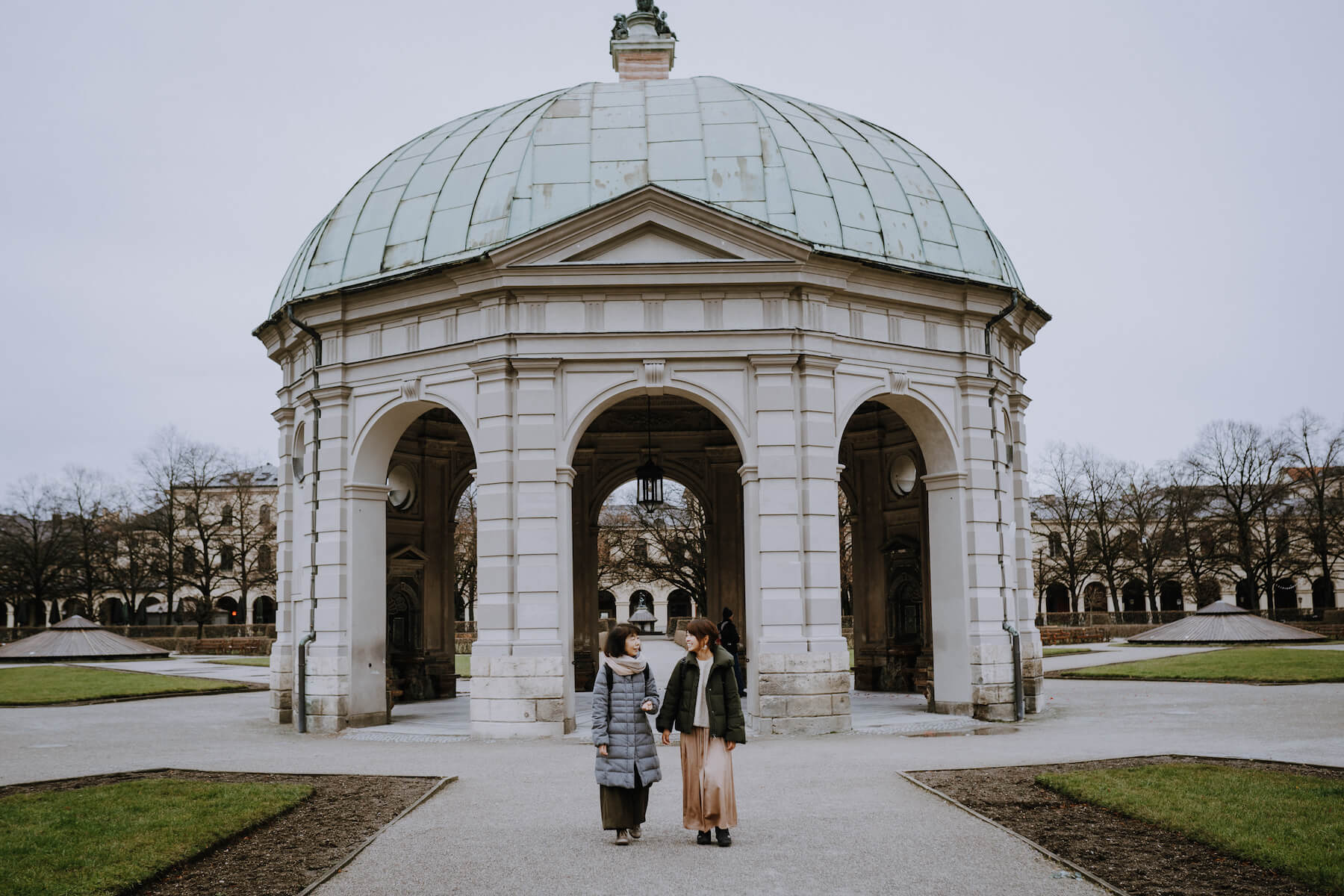 Photo: Julia in Munich for Flytographer. Kahori and family capture a day together in Munich at the Max-Joseph Square with a family photoshoot.

There’s no doubt about it – Munich is a captivating destination. No matter what you choose to do, the Bavarian city will leave you in awe with its stunning landmarks, fascinating historical sites, and gorgeous parks and gardens. From wandering through the streets to having a pint at the pub, you will find many things to do and places to take photos in Munich. Book a Flytographer shoot to capture your memories in this lively city full of history and wonder. ✨ 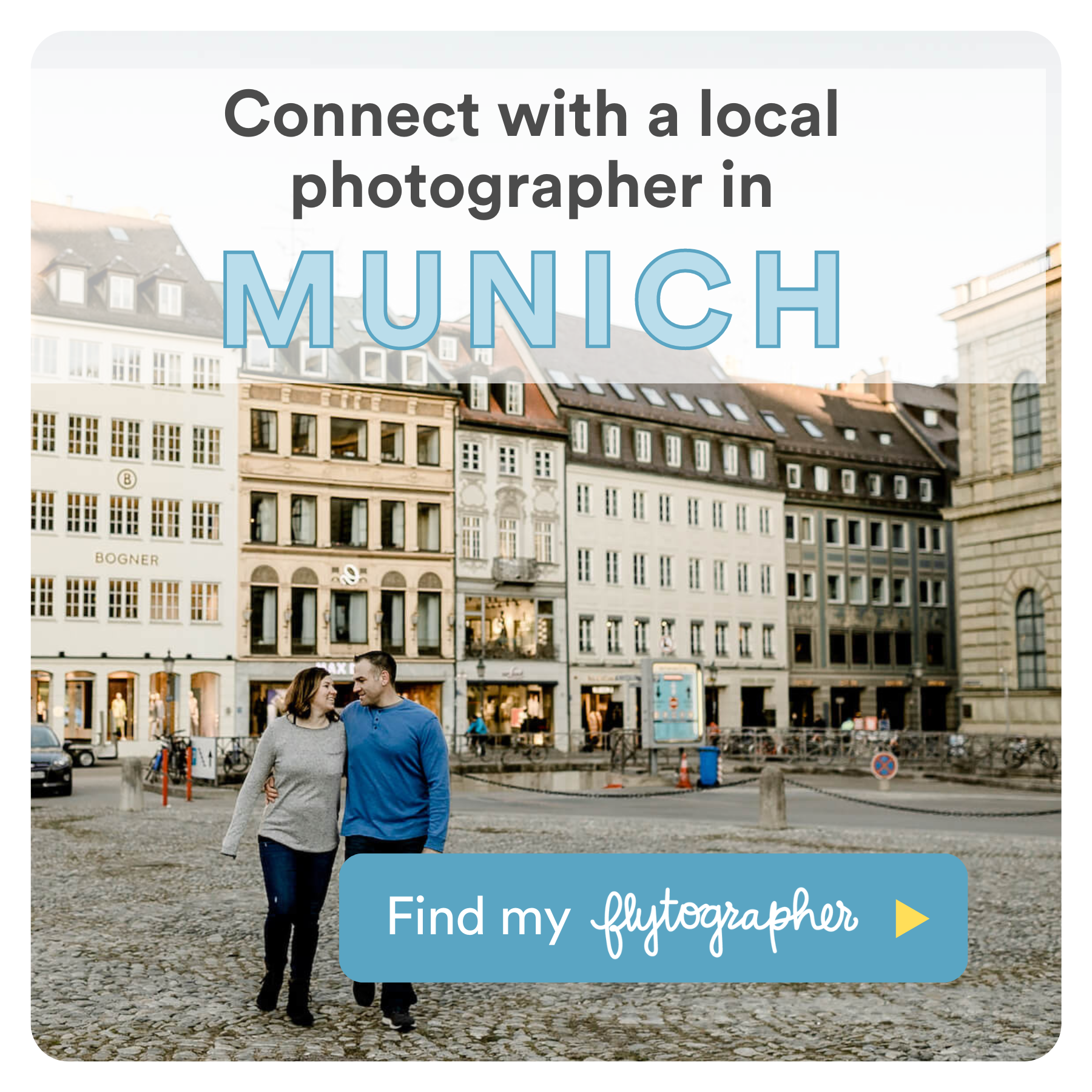 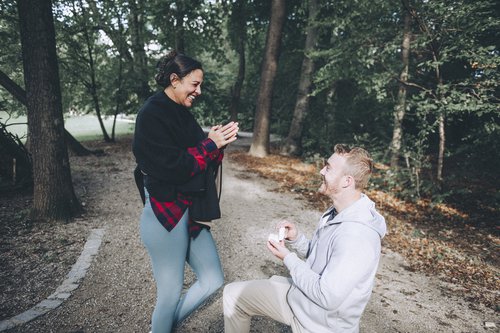 “I did the surprise proposal and Marina made everything so easy. She communicated everything to me, helped me plan it. She made sure I got exactly what I wanted. On the day of the shoot we had to switch our plans a little and she was super helpful and really made it a special moment. Can’t thank her enough!” 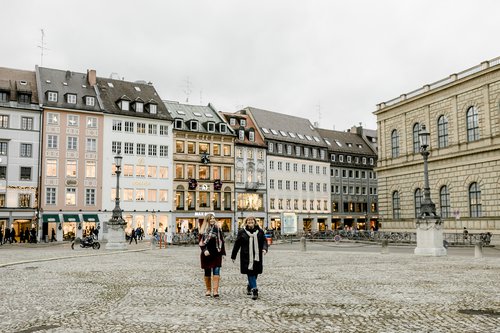 “Gloria was amazing! She was so easy to work with and made us feel so comfortable. Even my mom, who doesn’t like to have her picture taken, had a lot of fun! Our pictures of our mother/daughter trip turned out great and I would 100% recommend Gloria for your Munich photoshoot!” 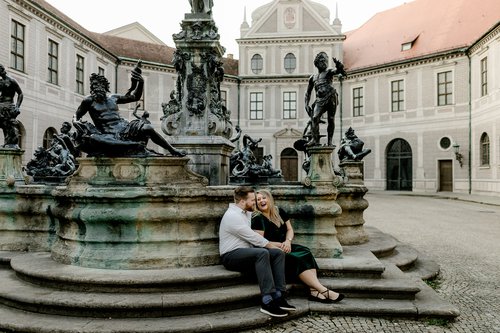 “Gloria was incredible! Not only did we receive a photoshoot, we also got a tour of the city and advice from a local. She greeted us with a smile and hug and made it such a personal and fun experience. Our photos are INCREDIBLE! I highly recommend Gloria!”