A Heartfelt Proposal at the Top of the Rock 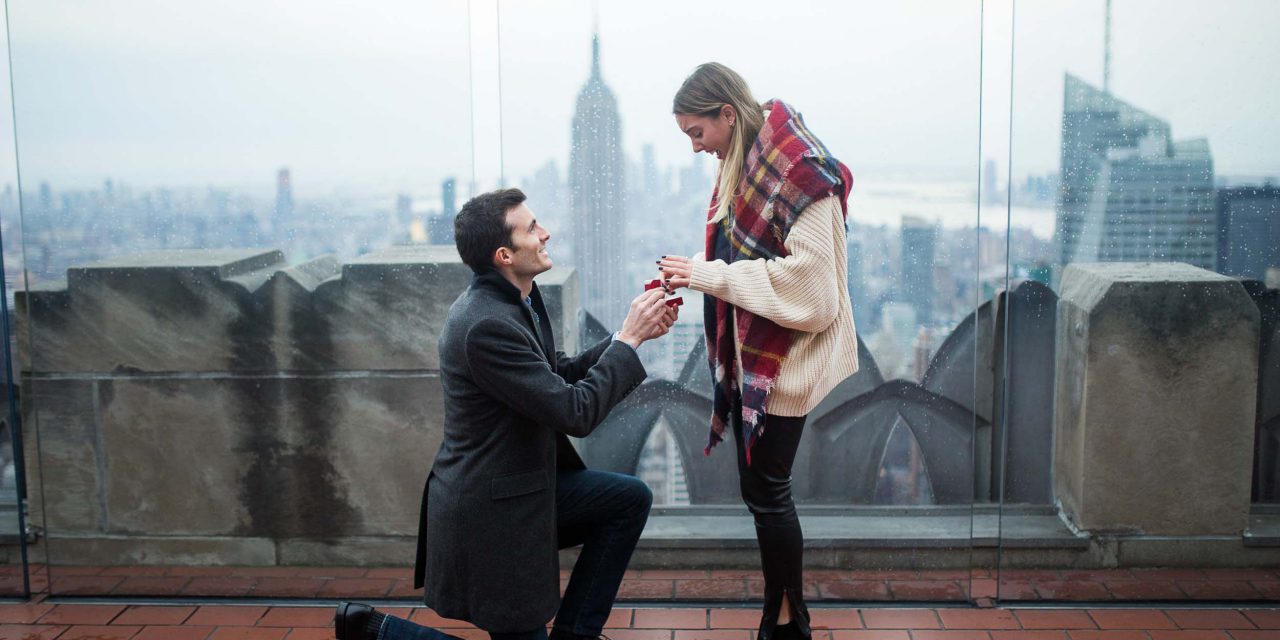 This uber romantic Top of the Rock proposal wasn’t the only surprise of the day. Besides planning this epic surprise atop New York City, Tony had a few more tricks up his sleeve. Read on for Bryanne’s account of all the heartfelt details.

“Tony and I met our freshman year of college in Buffalo, NY more than ten years ago. He seemed to be the local who knew everyone, and I was the new girl in town. We quickly became friends, but did not start dating for a few years. Eventually, I moved to New York City to go to school at FIT and start my career in the fashion industry while Tony remained in Buffalo starting his career in commercial real estate and finance. This began a three-year long-distance relationship that stretched from Buffalo to NYC to Florida and finally back to NYC. It was difficult being apart, but in hindsight that built our strong foundation. “In 2013, Tony relocated to New York City and moved into my tiny one-bedroom apartment on the Upper East Side. Slight panic set in as I quickly realized 500 square feet was pretty small, and all the personal nuances I had grown accustomed to were about to be compromised (some may say I have a touch of OCD). However, after a few months, we settled into our own new routines as a couple. Football Sunday became something I looked forward to (go Bills!). We met new friends. We explored the city. We grew up together. We became best friends. And we both realized that one without the other was just not as good. “This spring, we went casual ring shopping together (yes, together. It took me a long time to realize that was ok, and I wasn’t going to jinx it). Turns out that was one of the best moves I made; I found out the ring style I originally wanted via Instagram was not exactly what I wanted in real life. After that, I thought, well, the ball is in his court! I figured he would most likely wait until February, around my 30th birthday. Plus, we have been happily dating for more than eight years, so it’s not like either of us was in a hurry. “The Saturday morning of November 18 was like any other. The week before, we had made dinner plans at Del Frisco’s to use a gift card I had gotten him for his recent promotion. Keep in mind we usually do the early bird specials at steak houses so we can get the best deal, naturally. So, I didn’t think it was odd at all when he said be ready by 3 pm. He also said that his supervisor gave him a nice gift in appreciation of the long hours he had worked the previous weekend. We would plan to do that in tandem with dinner. I didn’t know details, nor did I ask (I love surprises). “All of my beauty routines had coincidentally fallen that week prior (it takes a village). All, except my nails, which I figured I would do right before we left. Of course, that nail appointment made us late for what I thought was just dinner. As I ran down the street to get into our car, wet nails held high, he said we were going to use the gift from work first. As we pulled up to Rockefeller Center, I thought maybe we were going to see the Rockettes! But instead, we pulled over in front of the observation deck and he told me this was the surprise. I had never been up to the Top of the Rock, so I thought it was a lovely gesture. “Once we were up there, I was taking selfies and snapchats, pointing out our apartment and other favourite landmarks, acting per usual. I noticed he was kind of walking briskly ahead, offering to show me a few other views, but I didn’t think anything of it. Finally, after my fifth selfie, he asked a kind stranger if he would take our picture. He did, and we looked at it in approval. Tony asked him to take one more for good measure, and then he turned to look at me and I automatically started crying. I just knew this was it, and I also kept repeating, ‘Is this it?!?’ It was a beautiful moment, and of course, I said yes and very shakily put the ring on my finger. I was in awe, it was perfect.

“Coming back to reality, the kind stranger introduced himself to me as Johnny, our photographer. Mind blown, I continued to cry, and hug, and of course tried to call my mother. There was barely any service and she said she couldn’t hear me because she was at my cousin’s hockey game and there was no service. Finally, after much yelling, she gets the part that we are engaged! Then the call dropped again. While waiting for her to call back, we continued to take photos above this gorgeous city, on the most perfect cloudy day.

“Then, as we took a few photos in the corner of the rooftop, Tony leaned in to give me a kiss. When he moved away, I saw both of our families, led by my mom in full sprint, running toward us. It turned out my mom really didn’t have service because she was on the subway to us! To say I cried is an understatement. Our families mean everything to us, so to have them all there from out of town was overwhelmingly wonderful. “We took pictures together, shared stories, and yes, we went to dinner at Del Frisco’s. It was the most perfect, magical, day. I was completely surprised not once, but twice, and I have never felt surrounded by as much love as I was that day. I can’t wait to feel it all again on our wedding day.

“Thank you Flytographer and Johnny for capturing this special day that we will never forget for the rest of our lives!” – Bryanne Looking to capture your NYC proposal? Check out our professional proposal photographers in New York City.

If you liked this story, here’s a few others you might enjoy: