The Best Places to Propose in New York City 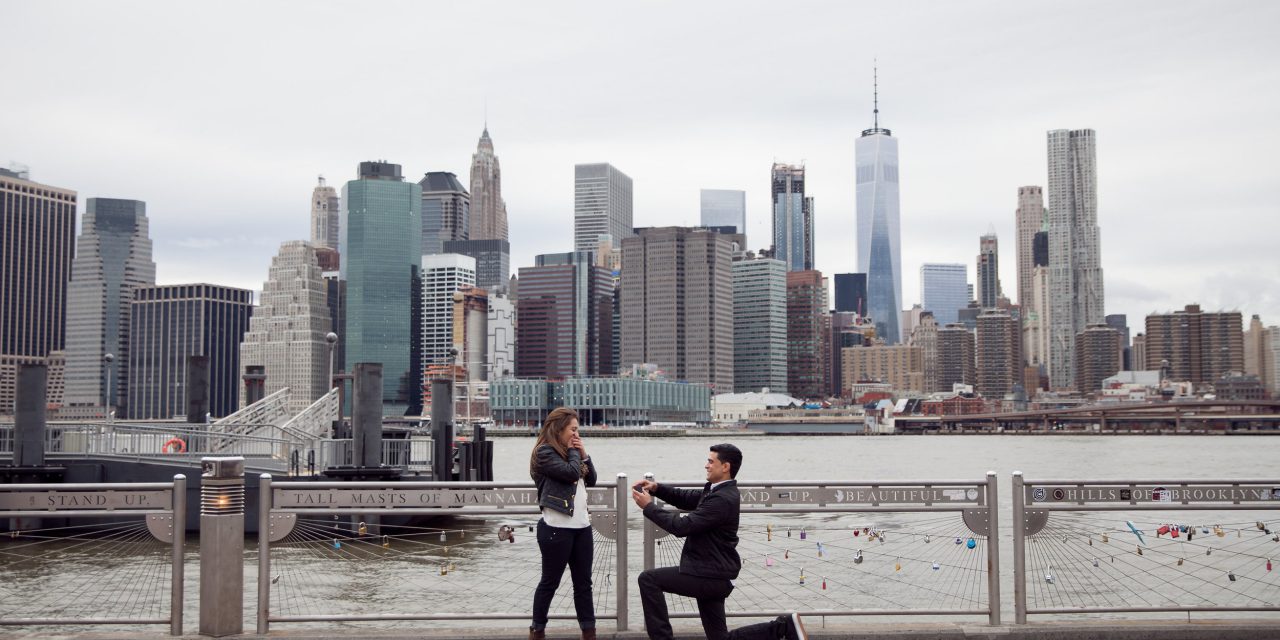 Jaw-droppingly tall buildings, the air wistful with the hopes of tourists, newcomers and natives alike, lush, scenic parks right in the middle of the concrete jungle… New York City has long been recognized as one of the most romantic cities in the world.

As one of the top proposal cities in the US, there’s no question that there are a plethora of picturesque places to propose in New York City that will provide the perfect backdrop to your special moment.

On Bow Bridge in Central Park

Bow Bridge is considered by many to be the most romantic feature of Central Park. This iconic bridge crosses the famous Central Park Lake, connecting the Ramble with Cherry Hill.

If you’re here during spring, you’ll be treated to the nearby cherry blossom trees in full bloom! But no matter the time of year, Bow Bridge’s gorgeous city views combine with the beautiful surrounding foliage to provide the perfect place to pop the question.

In front of Gapstow Bridge in Central Park

One of Central Park’s most iconic spots, the charming Gapstow Bridge provides a lovely proposal backdrop any time of year. Dusted with snow or surrounded by lush greenery, Gapstow retains its magical charm.

Breathtaking views of New York City’s skyline plus a slightly off-the-beaten path location to give the two of you a little privacy make this one of our favourite proposal spots. In the city’s most renowned slice of paradise

With more than 800 acres of stunning greenery and unique architecture stretching from 59th to 110th St., it’s hard to get more romantic than the ever-famous Central Park.

Surround yourselves with the emerald of the park’s rolling hills at the Bethesda Fountain, take in the city views, or capture the yes with an iconic, picture-perfect proposal at the Central Park Mall for staggering visual effects and the epitome of romance. Down Under the Manhattan Bridge Overpass (DUMBO)

Pop the question down under for a perspective that can’t be rivaled in any of the five boroughs.

Profess your love beneath the still grandeur of the Brooklyn or Manhattan bridges, and give her the low-key New York City proposal she’ll remember forever.

If sweeping skylines are more up your alley, get down on one knee with a level view of the city that is sure to take her breath away. Along the scenic path of the High Line

On one of NYC’s up-and-coming hotspots for tourists and locals alike, you and your boo can enjoy more than 2 km of varying views, with the Hudson River to one side, and the humbling streets of Midtown to the other.

Go above street level to put a ring on it at this transformed urban park, because you don’t need to climb to the 102nd floor to feel like you’re on top of the world. At the Top of the Rock

Get a panoramic proposal that doesn’t come from the top of the Empire State Building.

Glimpse down at the city 70 stories below and thrive off the magic of the holiday season to give your ask the ambience and atmosphere of one of her favourite movies.

If you’re travelling to New York during the warmer months, don’t fret — the view at the top of Rockefeller Center will astound both you and your future fiancée any time of year. 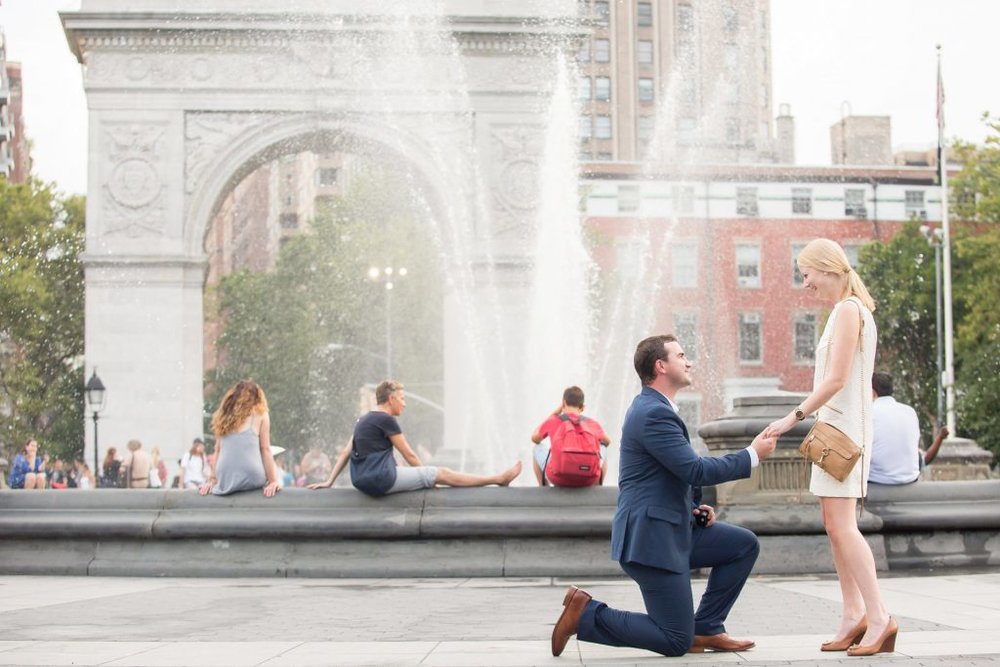 Among the twinkling lights of Washington Square Park

Though nowhere near the expansive majesty of Central Park, Washington Square Park is no consolation prize as places to propose in New York City go.

Ask for her hand beneath the marbled stairs of the Washington Square Arch for a Parisian-like proposal right in the heart of the city, or get the yes among the shining, shimmering, classic New York street lights on an evening stroll in the park.

Need help planning the perfect New York City proposal? Our Concierge Team is at your service!

Book your proposal shoot to capture the yes on the day you’ll both remember for a lifetime to come.

If you liked this story, here are a few others you may enjoy:

Save or Splurge: Your Ultimate Guide to New York City