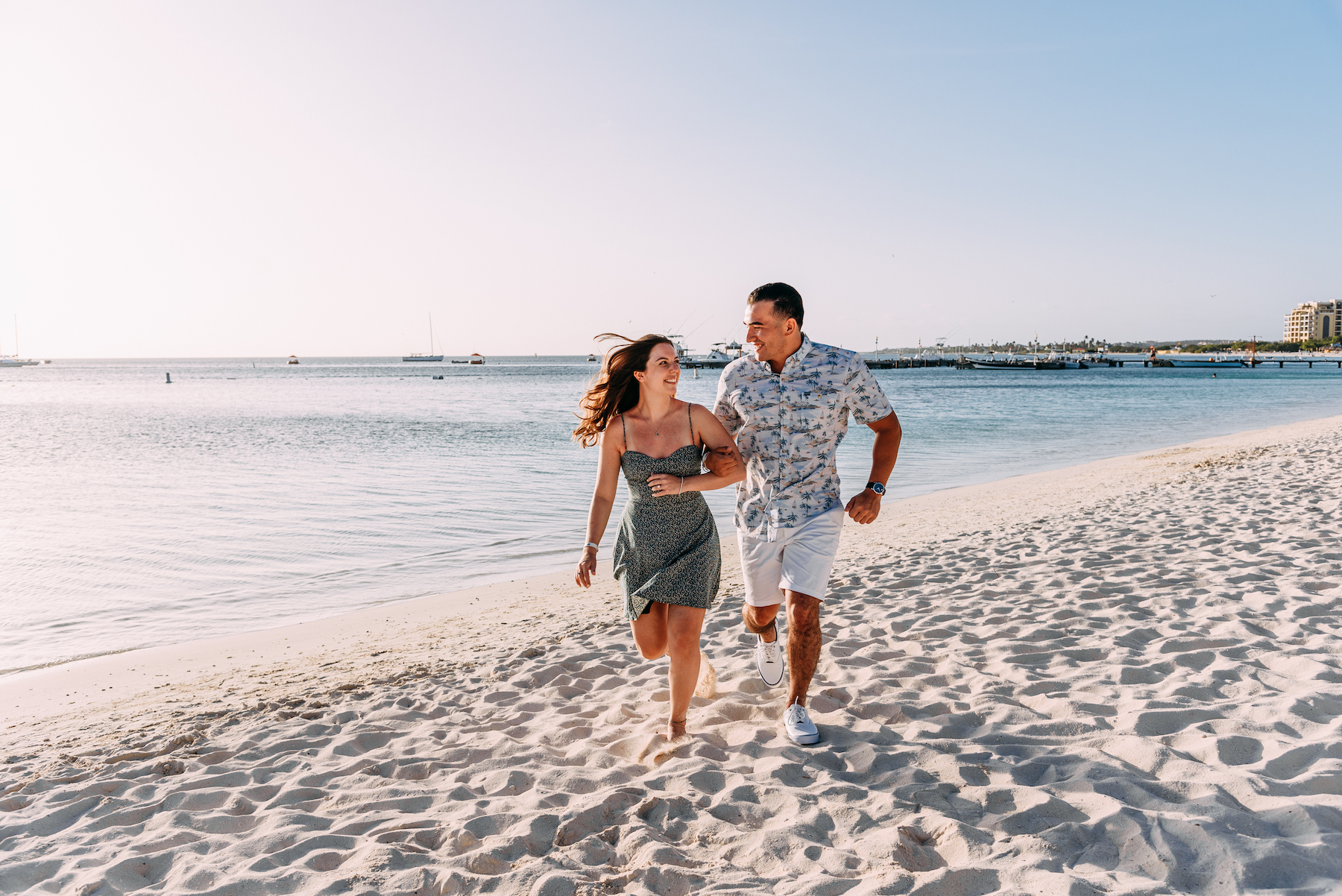 Dreaming of paradise? The Dutch Caribbean island of Aruba is the real deal, and that’s why it should be on your travel bucket list. The whole place is replete with fabulous beach resorts facing long stretches of white sand and crystal-clear waters. Nature gets even more exuberant because of the stunning vegetation, which includes the divi-divi trees, aloe, cacti, palm trees, and mangroves. The island also offers bustling city life in Oranjestad and the artsy vibe of San Nicolas. The latter has countless instagrammable murals covering entire buildings. From shipwreck snorkelling and wildlife watching to fine dining and partying, there’s no shortage of things to do in Aruba — and that’s not all! The island is also a wonderland for pics. Here are the 5 top places to take photos in Aruba. 🇦🇼 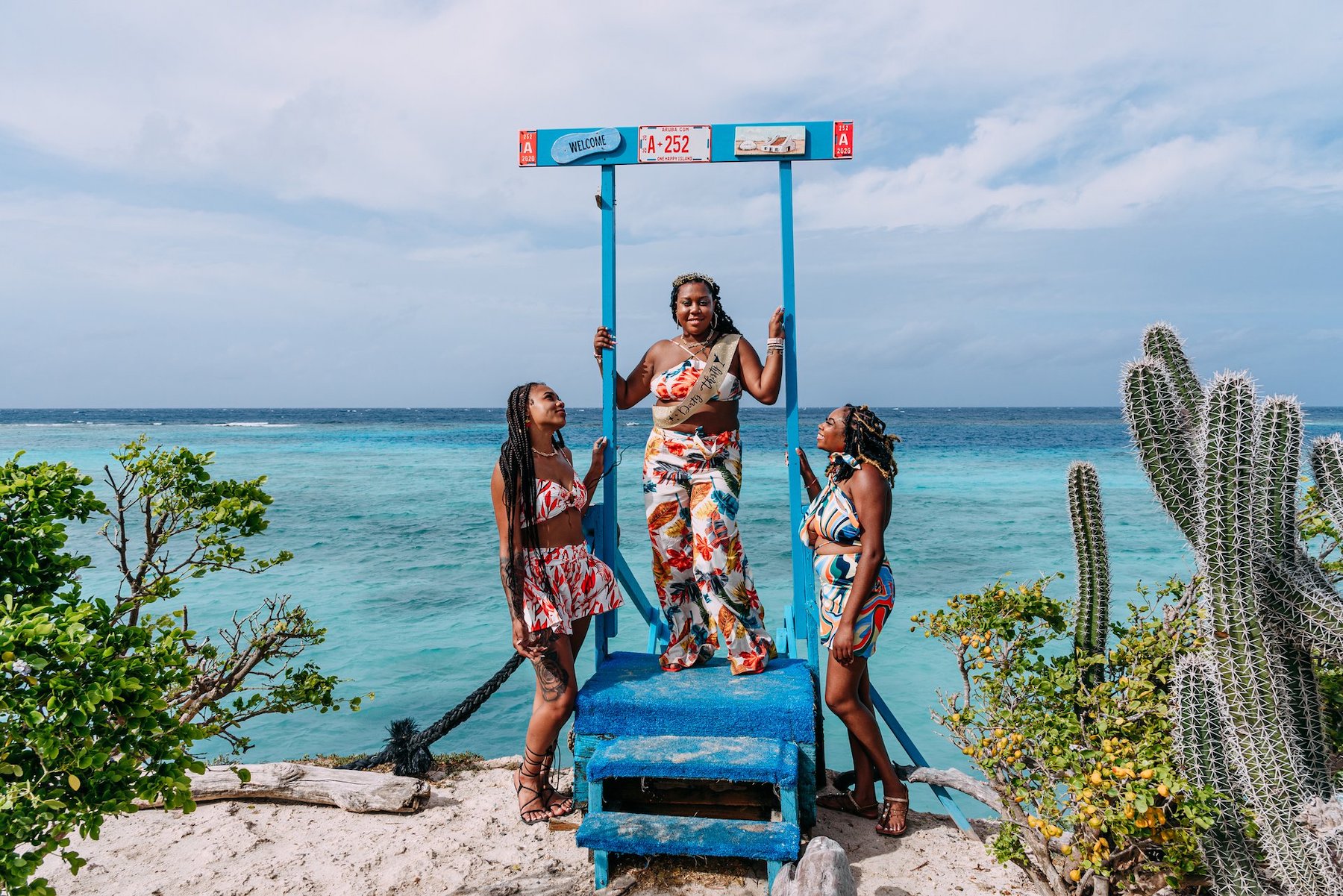 Photo: Karen in Aruba for Flytographer. Mariah and friends celebrate a birthday in Aruba with a friend photoshoot.

Oranjestad, Aruba’s capital, is the island’s most vibrant area. You’ll be spoilt for choice with plenty of cultural activities and shopping opportunities, and everything happens amidst stunning architecture and charming squares with beautiful fountains. ⛲

Walk down Main Street and admire the colourful facades, most in Dutch colonial style but with a Caribbean touch. Hopping on and off the free street car that makes the rounds downtown is already a tradition in Aruba tourism. It’s a gentle and fun way to explore every little corner of this bustling area. The cars stop at monuments, museums, and key shopping areas along the way. In different colours and with vintage designs, the trams — or trolleys, as locals call them — are some of the best places to take photos in Aruba. Try catching the double-deckers; they offer extra lovely views and photo ops. 🚋

Not far, Aruba’s Marina is also an excellent spot to spend the day. The docked sailboats and ships make for amazing photo backgrounds. This is also where you hop on a water taxi to head to Flamingo Beach on Renaissance Island. As the name suggests, the beach has a population of flamingos that look rather majestic with the turquoise waters behind them. Just note that this unique beach is on a private island owned by the Renaissance Hotel. Additional (and expensive) fees apply if you’re not a guest.

Close to the Marina is Fort Zoutman, Aruba’s oldest building. Today, it hosts the Historical Museum, where you can learn about Aruban history and traditions. 😉 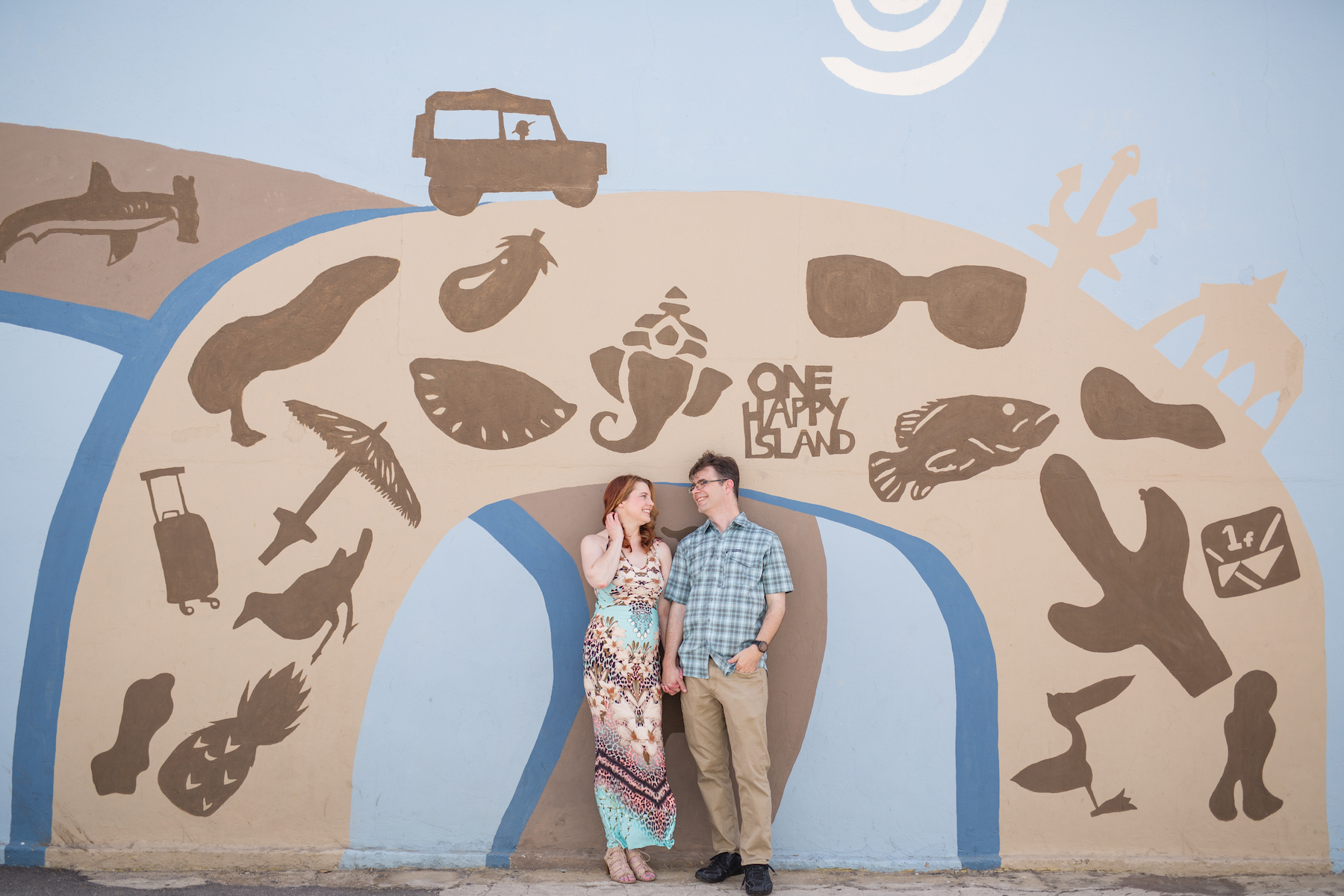 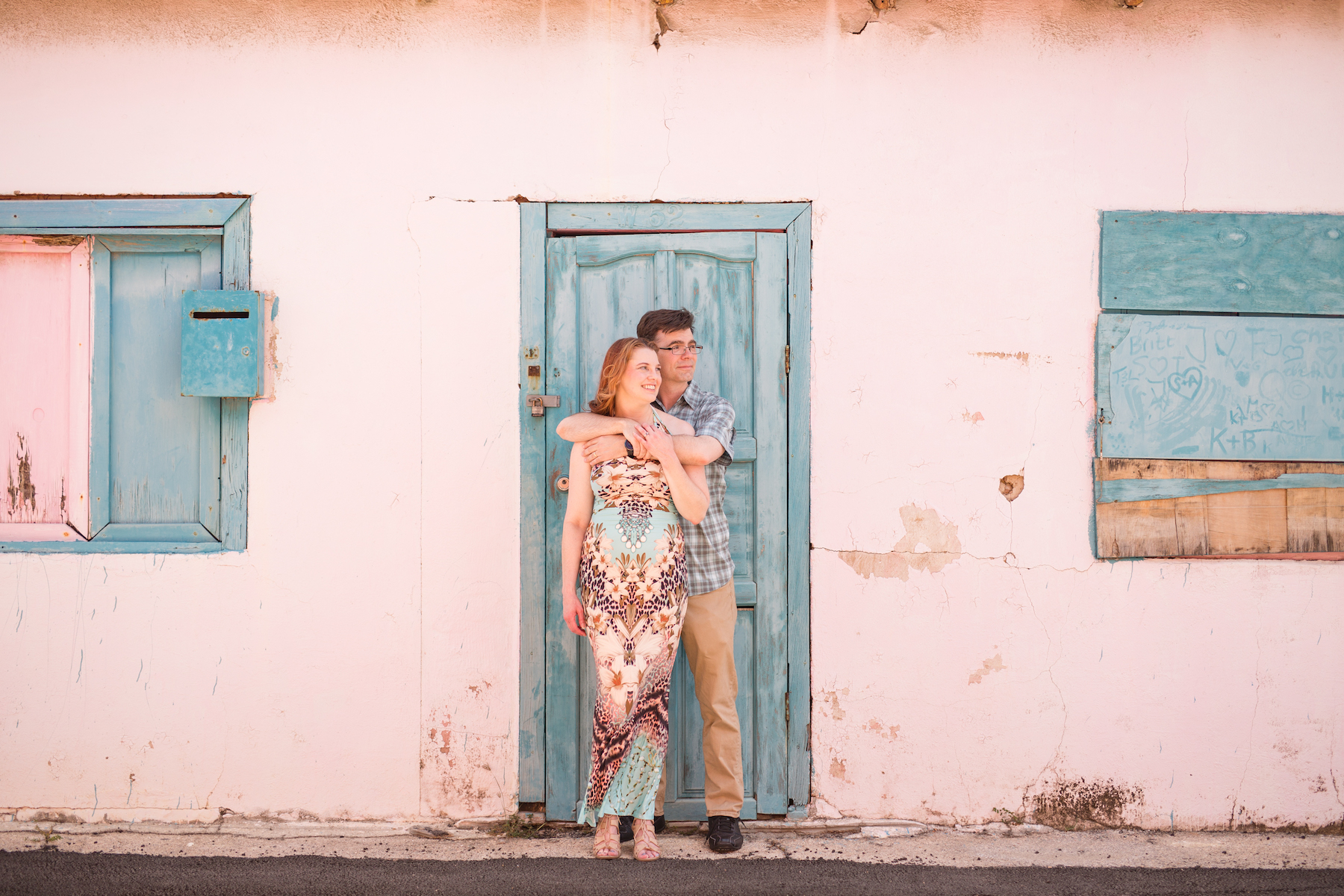 Photo: Flytographer in Aruba. Lisa and partner capture their anniversary together in Aruba at Oranjestad with a couple photoshoot.

Are you ready to smell the saltiness of the Aruban sea? Then head to Arashi Beach, on the island’s northwestern tip. This beach of calm waters and soft white sand is a local favourite and a brilliant spot to unwind and spend an entire day. There are plenty of options to grab a snack, and if you’re looking for some shade, there are palapas everywhere — these rounded huts with thatched roofs are free to use, and they’ll add an extra tropical touch to your pictures. 👌

Near Arashi Beach is the historical California lighthouse, one of Aruba’s most iconic landmarks. It was named after the SS California, a British steamship that sunk in nearby waters. The lighthouse is photogenic from below, but if you climb its narrow staircase all the way to the top, you’ll get incredible panoramic sights of the Caribbean sea. 😍

Another must-visit spot nearby Arashi Beach is the secluded Boca Catalina Beach. Here’s a tip: try visiting during weekdays; chances are you’ll have this piece of paradise just for yourself. 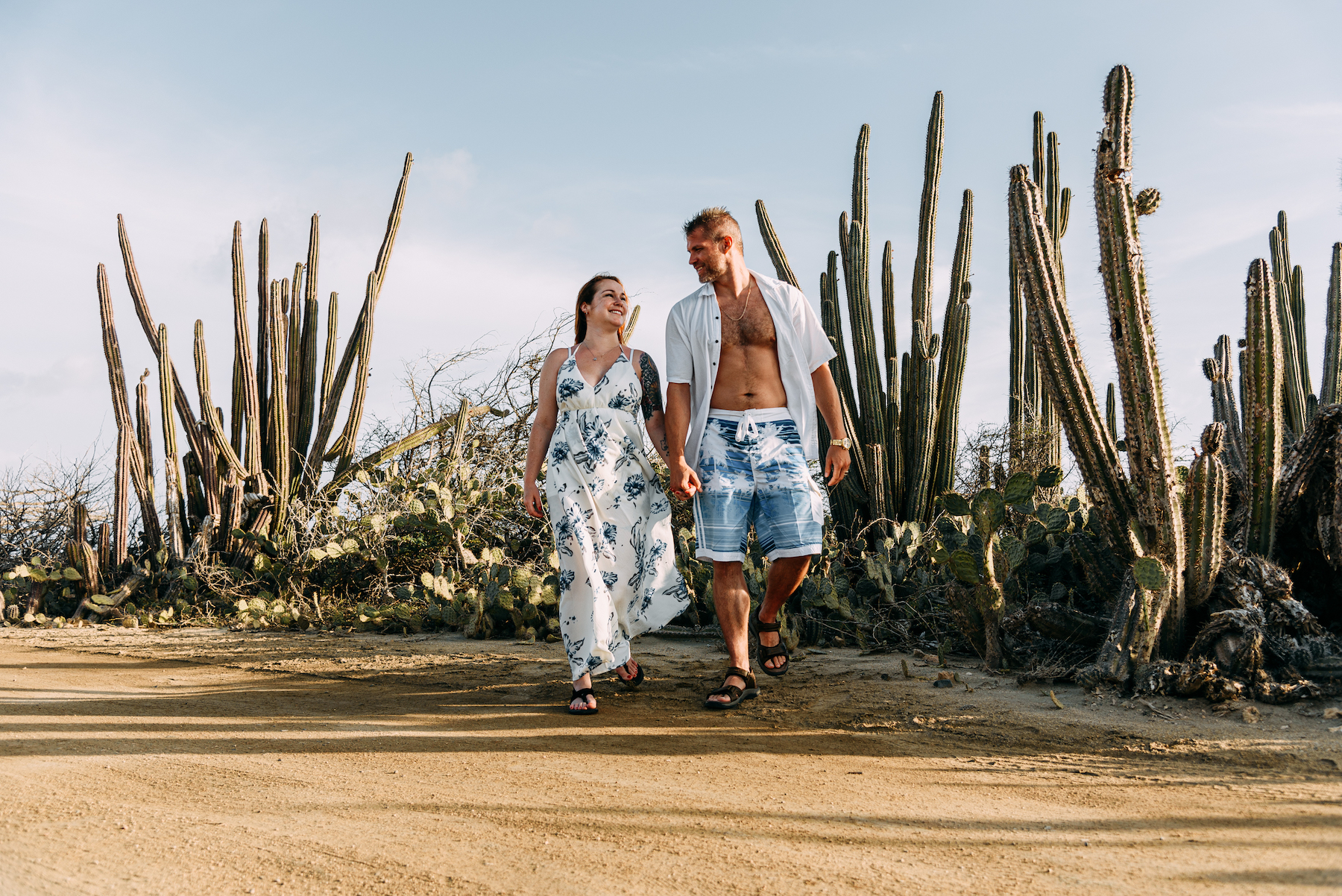 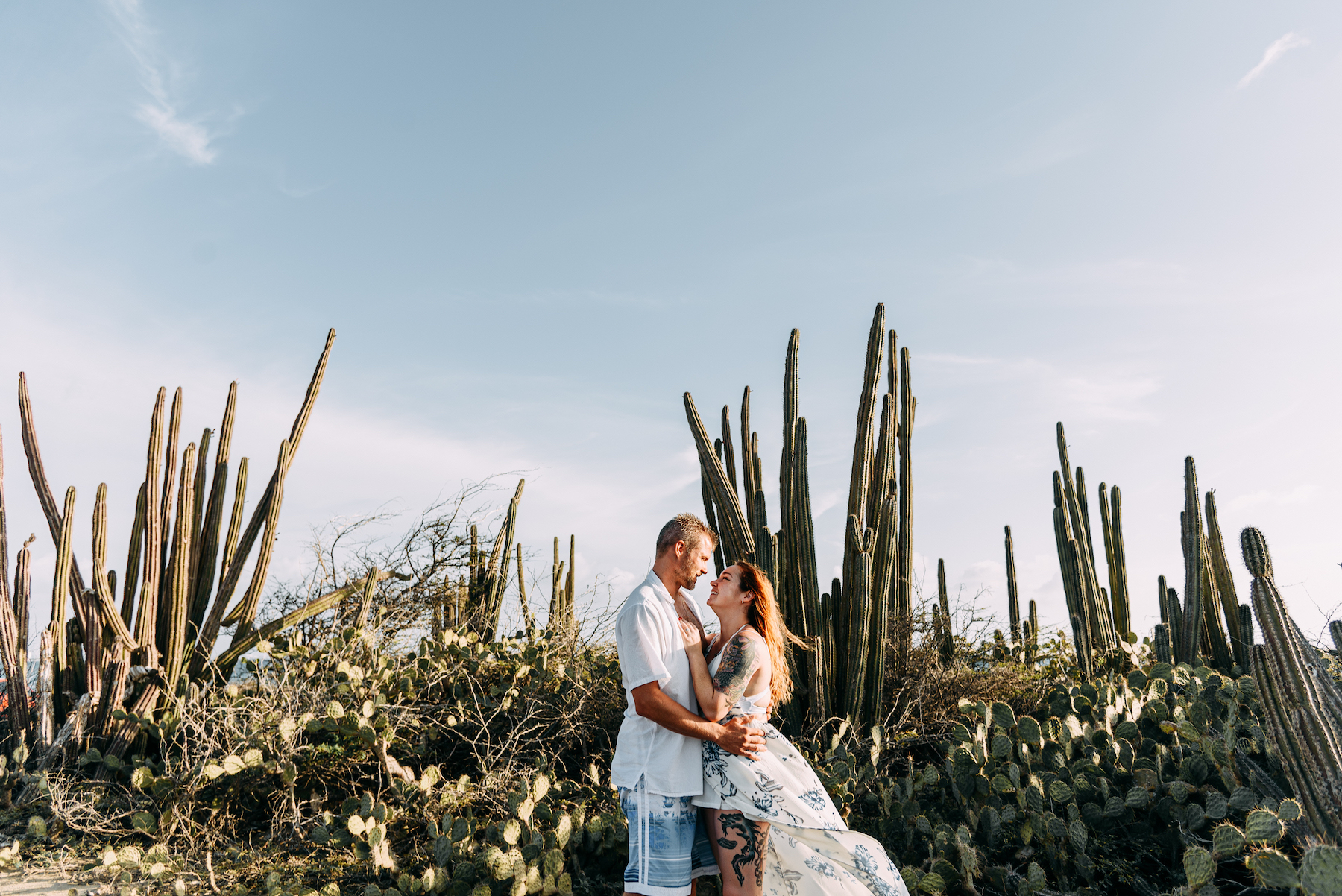 Photo: Karen in Aruba for Flytographer. Madison and partner enjoy their honeymoon together in Aruba at Arashi Beach with a couple photoshoot.

Considered one of the world’s best beaches, Eagle Beach is an essential stop for everyone visiting Aruba. It’s also one of the most photographed spots in town. The mangrove vegetation, cacti, and divi-divi trees along the coast add to the scenery of white sand and blue waters, making it even more beautiful.

One specific tree is a superstar: ⭐ the famous Fofoti tree. A true icon of Aruba because of its twisted shape that points in the wind’s direction, the Fofoti tree is a natural work of art. Taking a seat under its canopy is the classical Aruba shot. Extra tip: If the sun is setting right behind it, you can capture its rays through the foliage.

Eagle Beach is also ideal for a full day of relaxation. The calm water, free from rocks and seaweed, is very inviting for snorkelling, swimming, or just floating in the sea. Note that, except for Palm Beach, this stretch of sand is busier than others on the island. If you prefer somewhere quiet, head to Manchebo Beach, just a 6-minute drive away, where you can either sunbathe by the water or even pick a beach resort for a five-star spa treatment. 🧖‍♀️

Also near Eagle Beach but a bit off the beaten path is Aruba Beach Club, a family-friendly resort located directly on the shore, but still near many shops and restaurants. The resort offers guests an Olympic-sized swimming pool, tennis courts, and many children’s facilities. The beach there is great, and it’s a quiet spot for photoshoots, especially during sunsets. (Golden hour in Aruba is amazing!) 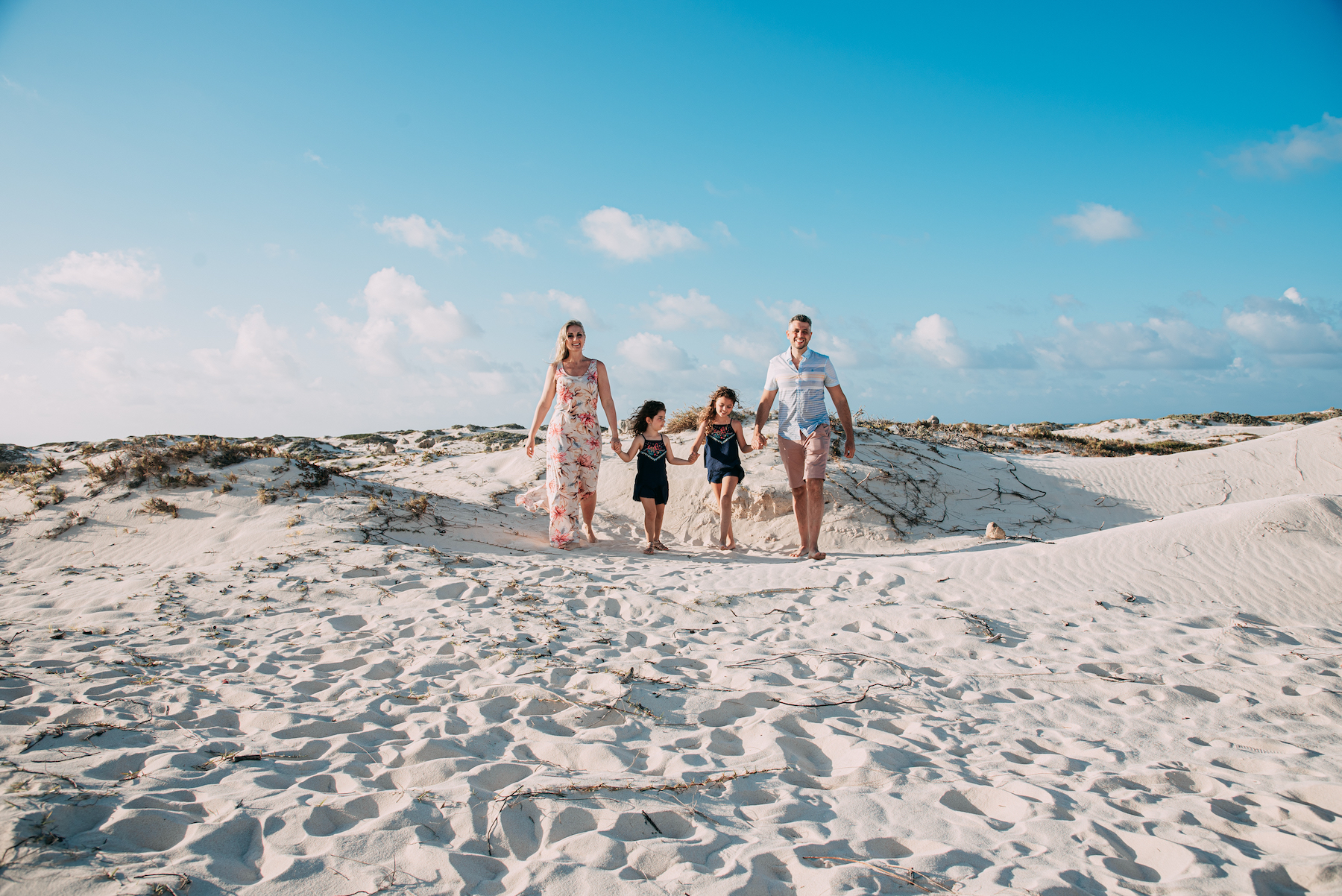 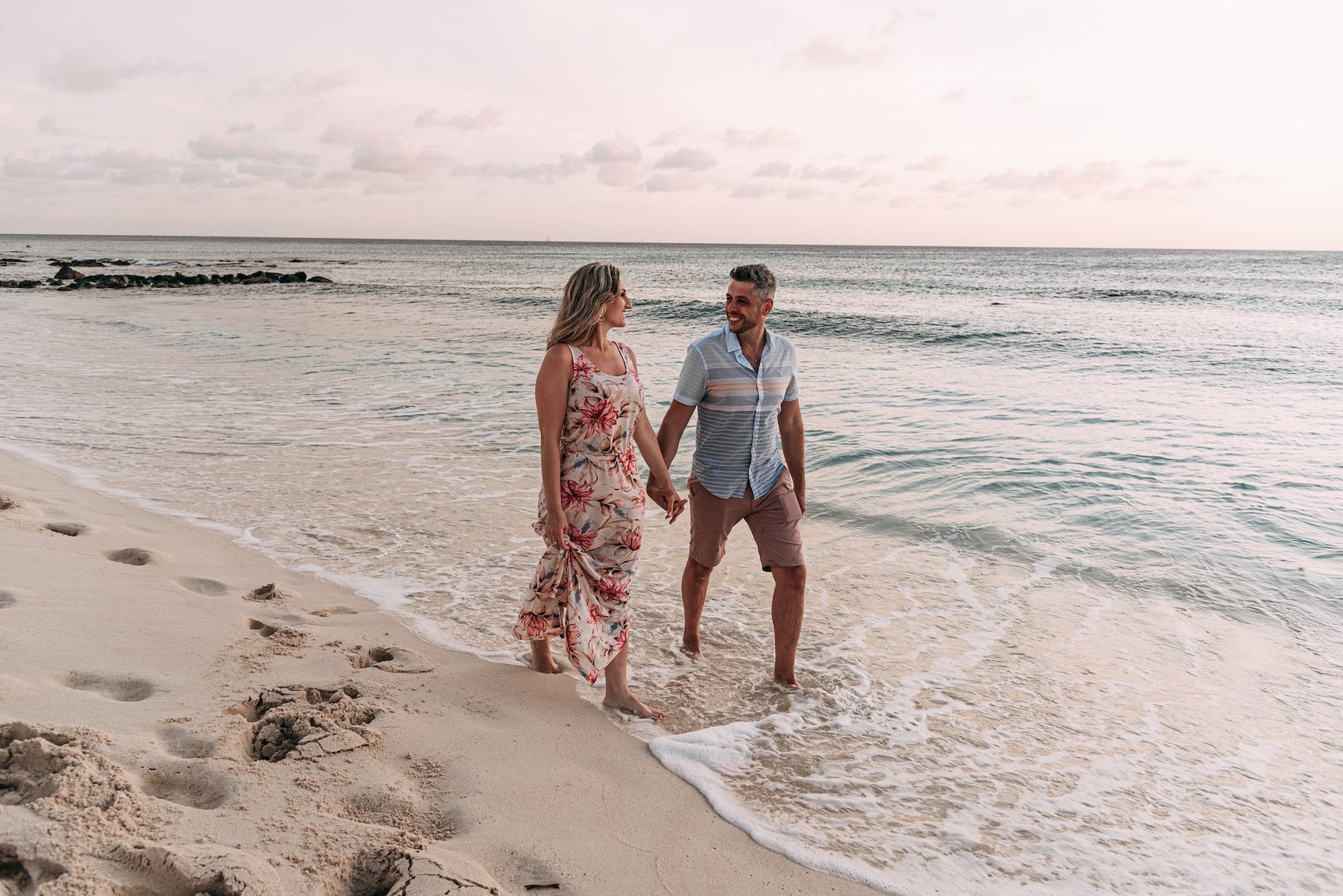 Photo: Karen in Aruba for Flytographer. Antigone and family capture a birthday in Aruba at Eagle Beach with a family photoshoot.

San Nicolas, the island’s second-largest city, sits only a quick 30-minute drive from bustling Oranjestad. Much quieter than the latter, this is the island’s cultural capital; wandering around town, you’ll find several murals and colourful street art, especially on the walls and buildings surrounding the main street. These murals are by talented artists from all over the world who take part in the annual Aruba Art Fair. If you want to add an artsy vibe to your Aruba photoshoot, San Nicolas’s streets are unbeatable! 👩‍🎨

After you get your necessary dose of art, you can check out more beautiful nature around San Nicolas. You’ll feel you’re in a secluded paradise at Baby Beach and Rodger’s Beach — both are among the top places to take photos in Aruba. They are also ideal spots for a relaxing walk on the wet sand to feel the ocean breeze.

In the nearby village of Seroe Colorado, you’ll find another wonder: a natural bridge formed on the cliffs facing the sea. You can spot the bridge from the ridge, but if you feel adventurous, you can hike down the rocks to see it up close. In that case, remember to be safe and avoid swimming in the sea because of the rocky coastline and the big waves. Instead, look for the natural pools that form with ocean waters.

If you’re up for a half a day trip from San Nicolas, you can visit Arikok National Park to glimpse some unique geological and historical sites, such as Dos Playa, Boca Prins, Fontein, and Guadirikiri Cave. The latter contains stalactites and stalagmites, as well as Amerindian petroglyphs. According to local folklore, the cave has holes in the rocks because the spirit of two lovers cut through the limestone to ascend to heaven — the specific spot is also called Tunnel of Love. 💙

Oh! San Nicolas is also known as “Sunrise City” because it’s on the southern tip of Aruba, where the sun goes up. If you’re an early bird, that’s the stage of another natural spectacle for you. 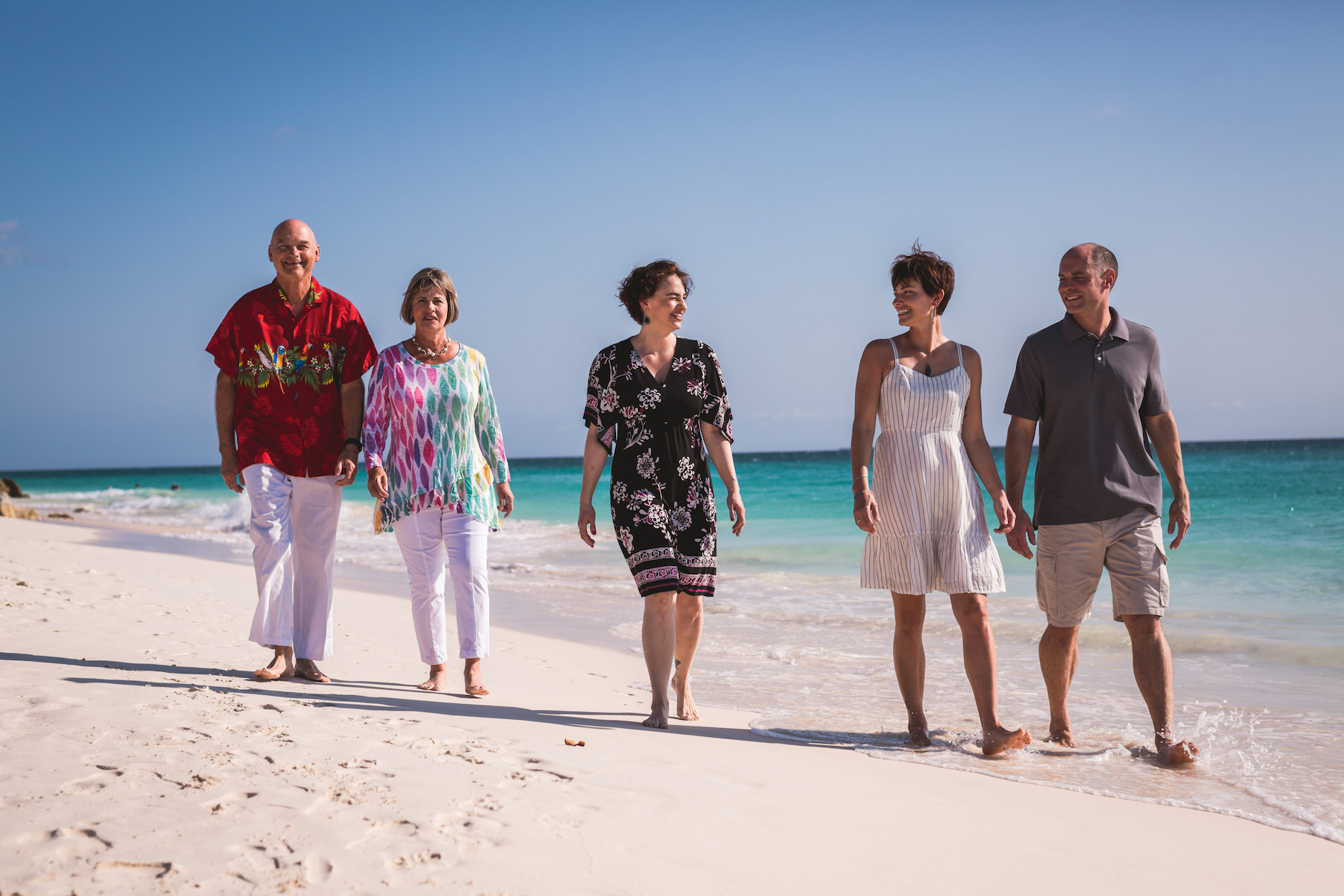 Photo: Flytographer in Aruba. Kenna and family celebrate a fun day together in Aruba at the Aruba Beach Club with a family photoshoot.

Looking for some beach-style glitz? You’ll find it in Palm Beach. Home to high-end resorts such as the Hyatt and the Ritz-Carlton, this spot is everything you expect from a Caribbean vacation. The calm waters are perfect for swimming and snorkelling, and the world-class restaurants and beach clubs that face the sea are ideal for feeling the breeze with a drink in your hand. 🍹

We highly recommend you try a smoothie from Eduardo’s Beach Shack. They have the best smoothie on the island — or at least that’s what locals say! The shack is also one of the best places to take photos in Aruba. Then, stroll the shore’s boardwalk for great photo ops of the mesmerizing turquoise sea and the tall palm trees. Because Palm Beach faces west, it has jaw-dropping gorgeous sunsets with truly heavenly glows. 🌅

Palm Beach is also one of the top spots for a night out in Aruba, thanks to its casinos, restaurants and clubs. 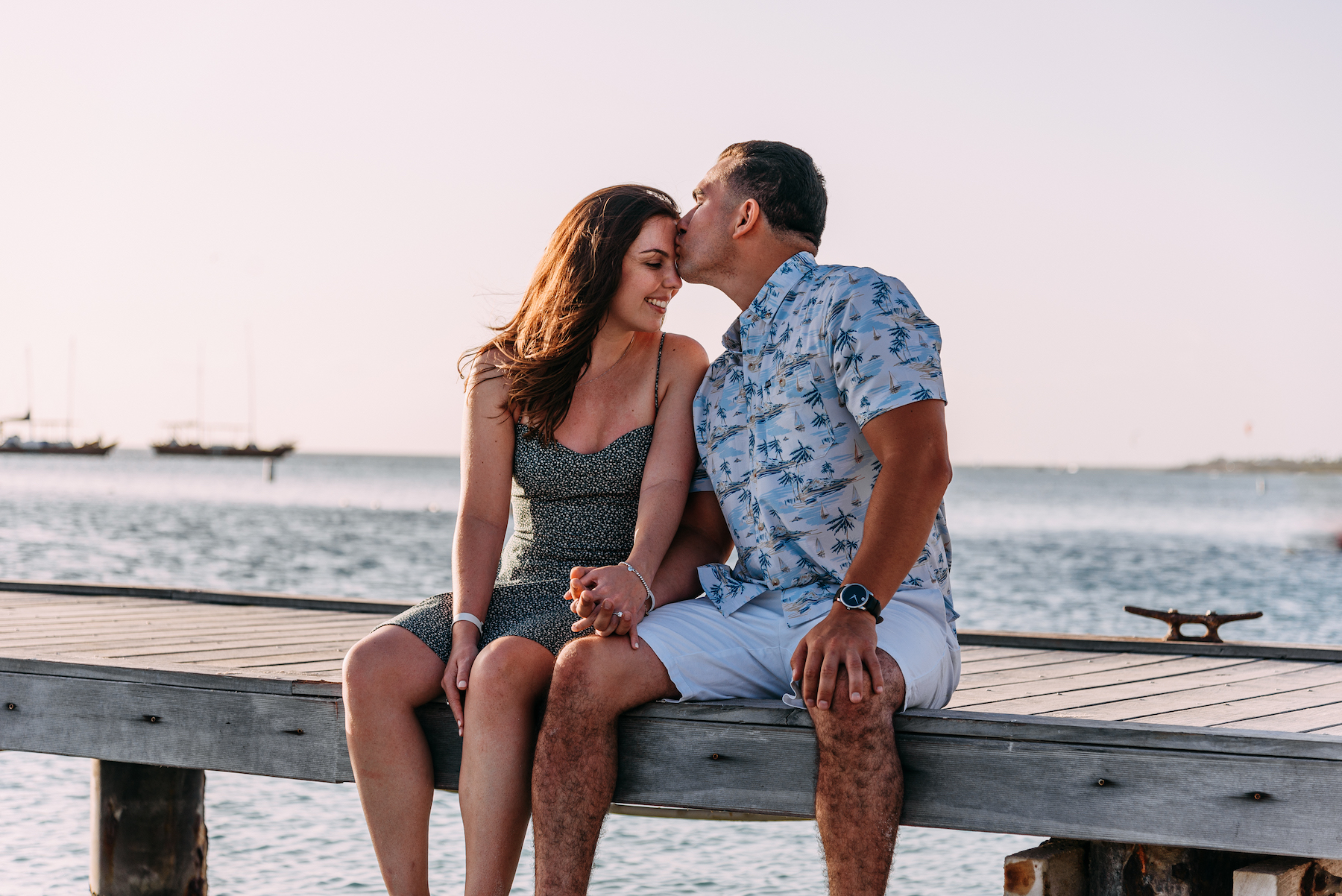 Photo: Karen in Aruba for Flytographer. Erick and partner capture their engagement in Aruba at Palm Beach with a proposal photoshoot.

Clearly, there are many reasons why Aruba’s motto is “One Happy Island,” right? Three more photogenic spots worth mentioning are Alto Vista Chapel, a small Catholic chapel on the hills, and Bushiribana and Balashi, the abandoned ruins of two gold mills. All three sites reflect local history like others.

For more insights on what to do in Aruba, read these amazing short tips from our community of travellers. To make the most of your trip to this Caribbean paradise, book one of our local Flytographers, and let them capture you, surrounded by all this fantastic Aruban magic. ✨ 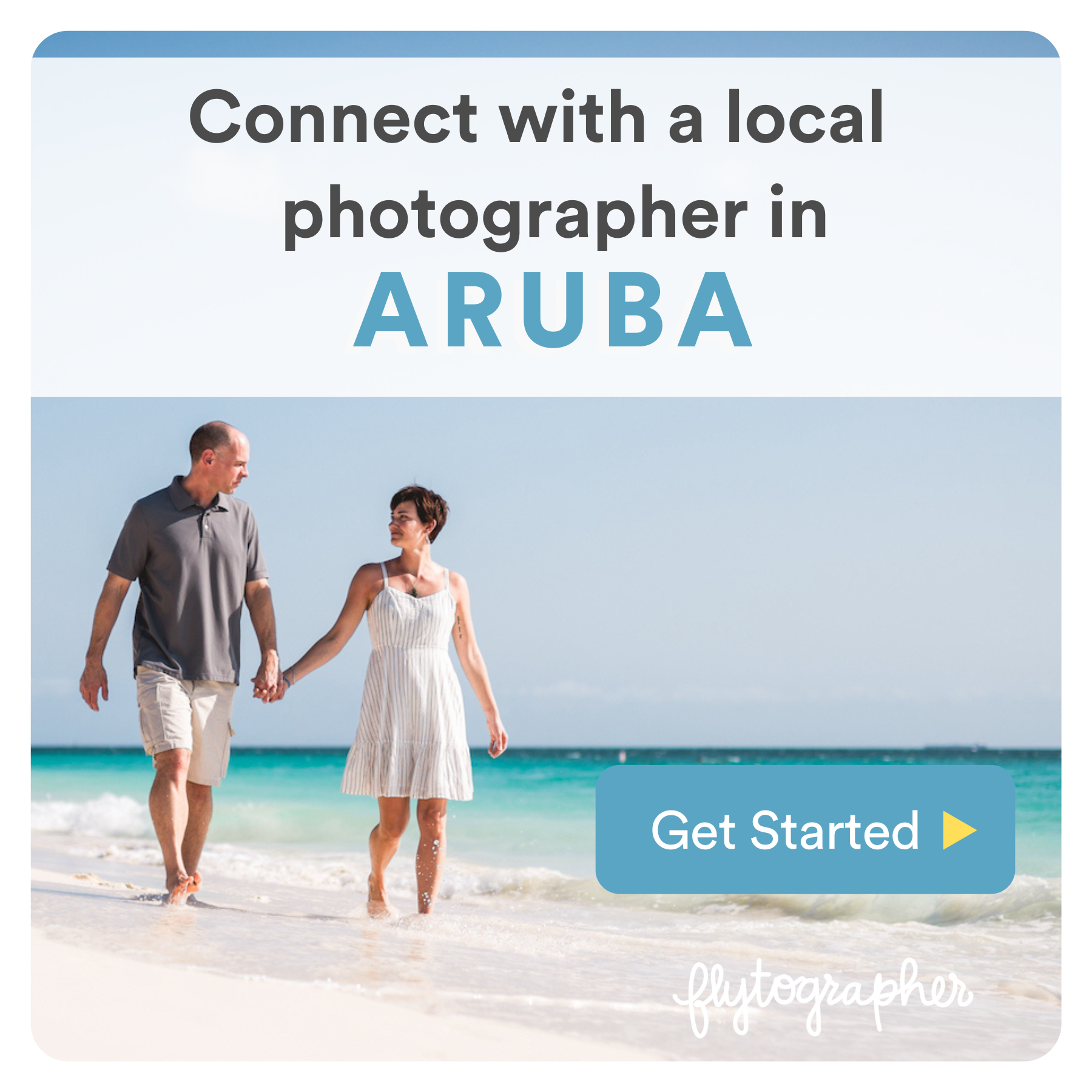 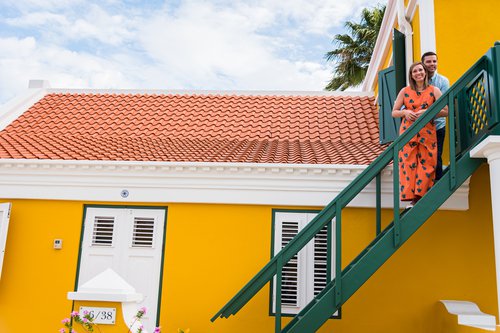 “Karen was absolutely amazing! She is the best photographer, picked the perfect location, made us feel comfortable, went above and beyond. and every photo was just what we wanted and better than we could have imagined! We highly recommend Karen and know you won’t regret booking with her! She even gave us some places to visit in Aruba and we visited each one, which made our trip even more memorable! We will cherish these photos for years to come!” 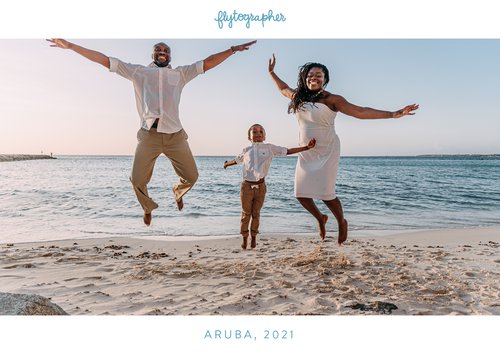 “Karen is an amazing photographer and has a kind and warm personality. She has a wonderful eye for composition, and captured our family beautifully. She also worked very well with my son who is a toddler. She is also very efficient. I would be happy to work with her again, and I have already recommended her to others.” 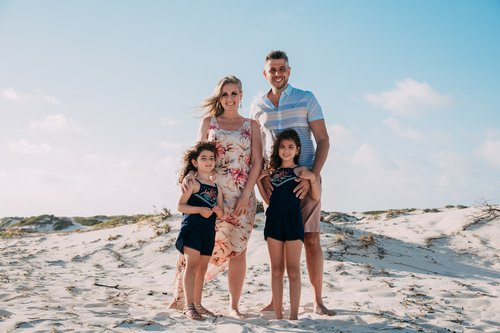 “Karen was AMAZING! We had an effortless natural photoshoot. The pictures came out perfect. My 4 year old got very cranky half way through the shoot and Karen was able to make her laugh and coax her into cooperating so we can complete the photoshoot. The spots she chose to shoot were perfect. I highly recommend Karen!”

Photo Spots in Galway On Ireland’s west coast, facing Galway Bay and right in the middle of the Wild Atlantic Way,...

Photo Spots Berlin Berlin is arguably one of the most cutting-edge cities in the world. Germany’s capital city has an...