She Said Yes on the Canals of Amsterdam 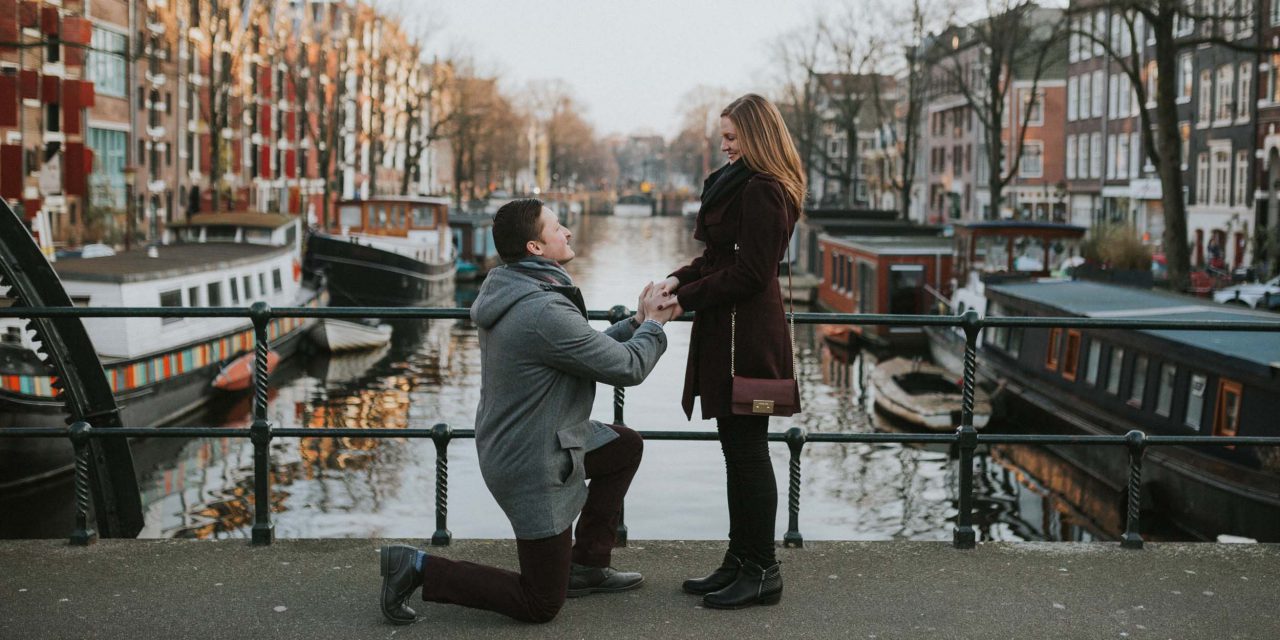 After an initial missed connection of sorts, Zachariy and Victoria’s shared love of travel had them planning a European adventure. But Zach had been secretly busy planning something else – a surprise proposal on the canals of Amsterdam. Read on for all the details. “It all started with our manager from work. She had tried to get Victoria and I to meet because she would always say how well we would get along and how perfectly we complemented each other. After a few failed attempts of trying to get Victoria and I in the same place, she finally decided to set up a team dinner. There were about twelve people at this team dinner all from the same store, and all of whom Victoria had worked with for much longer than I had. I decided to order a bottle of wine for the table and when I offered some to Victoria, she politely declined a glass. Immediately following her refusal of the wine, she called the waitress over and ordered a single glass of the EXACT SAME wine – it was clear that she didn’t want much to do with me. I was quiet the whole dinner because I was new to the team and am pretty shy. Victoria, on the other hand, was energetic and engaging with everyone at the table.

“In the weeks following this dinner, I hoped to work with Victoria, however, I was not so lucky. It was not until one night that Victoria walked into work surprisingly, as she was covering a shift for another intern while I was there. She asked me to let her into the pharmacy seeing as I was the pharmacist on duty at that time, and so I opened the door and she walked right past me simply saying ‘Hi.’ Unbeknownst to her, I got butterflies in my stomach and my heart skipped a beat when she walked by. I was excited that she was there so that I could spend some time with her to try to show her that I wasn’t always quiet and shy. Throughout the night she started warming up to me – we were joking and talking about school and life and the next thing we knew, the night was over! That night we began texting about some of the things we had discussed at work and that was it!

“We began talking and hanging out more – just trying to get to know each other. That December, Victoria had a big final to prepare for but was stuck at home due to a snowstorm without her notes and laptop. I had been talking to her all day and joked around saying that I would drive down and pick her up and drive her back up to her house at school to get her notes. She told me how ridiculous it was, but I simply wanted to spend time with her. I used her exam preparation as an excuse to drive an hour to her parents’ house to pick her up and drive her back in the middle of a snowstorm. On our way back, we stopped at a restaurant for dinner and that’s when she told me that she shouldn’t have judged a book by its cover and that maybe our manager had been right after all. That night I asked her to be my girlfriend and we have only been moving forward together since!” – Zachariy “I knew Victoria was ‘The One’ when I realized that I could not – and did not want to – picture a life of mine without her by my side. When I started missing her when we would be away from each other for short periods of time, when I started thinking of wanting to include her in all of the decisions I make in life, when I realized how much she means to me and how much she augments my life in so many amazing ways – that is when I knew she was the only one I wanted to spend the rest of my life with.” – Zachariy Related: The Best Places to Take Photos in Amsterdam HOW DID YOU SELECT YOUR PROPOSAL LOCATION AND DATE?

“I knew that I didn’t want to propose to Victoria in the United States. She is an avid traveller and quite eagerly gave me the desire to travel as well. We travel often, and very well together. We had booked a trip through Switzerland, France, Germany and the Netherlands over a year in advance and for me this trip was the perfect time. I decided six months prior to this trip that I would propose to her – I just simply could not narrow it down to a location. After some research, I decided that Amsterdam would be perfect. It is a beautiful city and the canals are amazing – I knew it would be somewhere unique that Victoria would love.” – Zachariy

“We went on a walking tour of Amsterdam with a small group of people. After the tour was over, Zach told me he made reservations at a cafe that had great reviews. We parted ways from the group and went to the hotel to put our luggage in the room and quickly freshen up before heading out again. As we were walking, Zach was taking more and more photos of the scenery, commenting on how beautiful Amsterdam was. We got to the cafe that he had planned on and I was so excited to get my first cup of coffee for the day! I started to head towards the door of the cafe and Zach grabbed my hand and explained to me that we were early and we should walk a few more blocks.

“As we walked, he looked at me and asked if I wanted to go take a selfie on a bridge we were passing by. I began laughing at him knowing that he never uses words like selfie, but I agreed and went to the bridge with him. We got right in the middle and he snapped a photo as I was laughing at the whole situation. After he put his phone away, he grabbed both of my hands, looked me right in the eye and got down on one knee. I was absolutely stunned! I couldn’t believe what was happening, but I was so perfectly happy. I was thinking about nothing but how I am the absolute luckiest girl in the world to have Zach in my life, asking me to spend the rest of my life with him. Of course I said, ‘Yes!’ and Zach placed the most beautiful ring on my finger. It was the single most exciting and blissfully happy moment in my entire life.” – Victoria “The feeling immediately after saying ‘Yes!’ to the man of my dreams was a feeling that I could never imagine. It was a feeling that is unfathomable until you are in that moment – the man that I am so utterly in love with, who I want to see this world with, experience life with, asked me to spend the rest of our days together, walking hand in hand. The calm that came over me in the moments after was unlike any other – I felt ecstatic, loved and safe. After our photos were done being taken with Silvia, we met my parents and closest family friends at a canal cruise. As we approached, Zach and I discussed that we were going to try to hide it from everyone and wait to see if anyone noticed. Little did I know, my mother and father already knew what his plan was so there wasn’t much of a secret to keep. We approached them and I simply couldn’t keep it in – I showed everyone! After the initial yelps of happiness and shaking of hands, we all boarded the boat. We ordered bottles of Prosecco to celebrate with some of the people that we love the most.” – Victoria