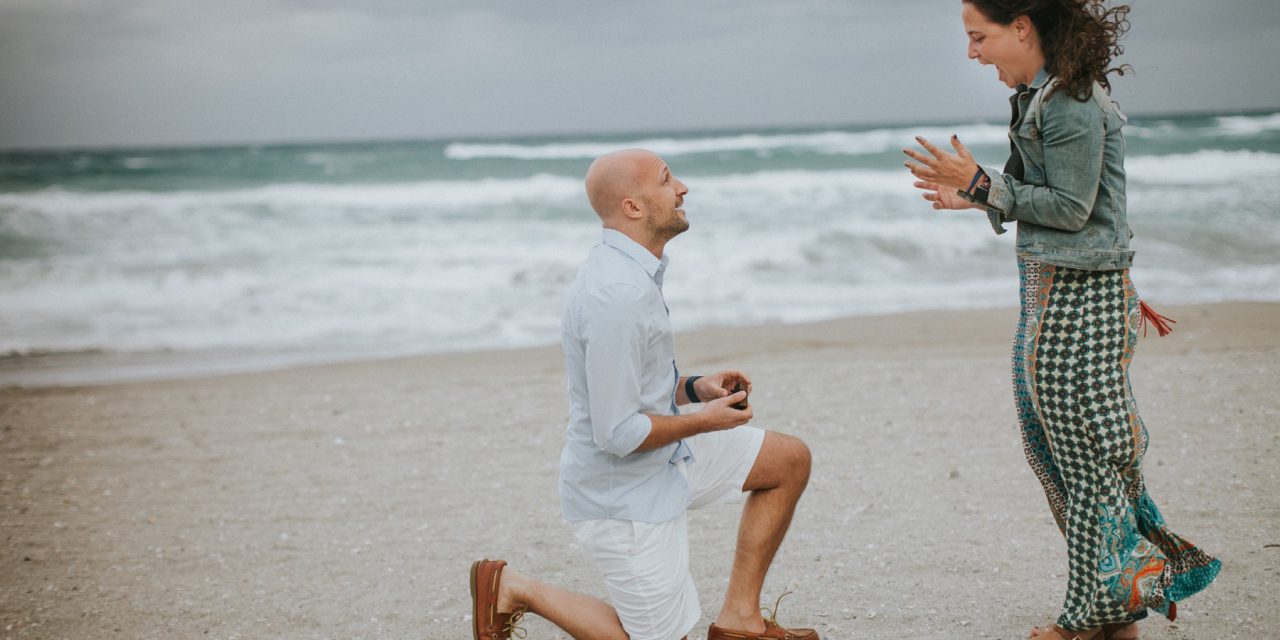 A windy grey day turned into one of the most magical of Jay and Kelly’s lives: little did Kelly know that on the stormy sands of Palm Beach, Jay was going to ask her to be his wife! Flytographer Cheryl captured this emotional surprise proposal, and caught one of our favourite reactions of all time.

Kelly: “Jay and I met online…on Tinder. Hold your judgment! We were both on it for a real date and a real relationship, despite its reputation (and thanks to my friend for convincing me that this was actually possible on Tinder). When I first saw him, the first thing I thought, with a sigh of relief, was that he actually looked just as hot in real life as he did in his photos! I truthfully found our first date to be pretty boring, but when he kissed me goodbye I knew I’d go out with him again. I texted my sister afterwards and told her exactly that – while Jay was simultaneously telling one of his sisters that he knew this could be the real deal. Our second date was the date where you’d use the phrase ‘…And the rest was history.'”

Jay: “I knew I wanted to spend the rest of my life with Kelly and I had been waiting months for the perfect moment to propose. Kelly and I decided to book an impromptu trip to Florida. I had just two short weeks to plan the perfect proposal. I knew that Kelly wanted someone there to take photos, and I knew I didn’t want it to be one of her friends. That would be too obvious. I came across Flytographer online and immediately knew they would be perfect.

“I booked a reservation and Shoot Concierge Tedi set up a Skype meeting with me and the photographer Cheryl. We planned all the details for the big day and they both provided plenty of advice and tips. Next step was to ask her parents for their blessing and to acquire the family heirloom ring. I decided to whittle a ring box out of wood. I needed something small enough to fit in my pocket without her noticing. On the big day, I was pretty nervous, and in my head I was reciting my words an estimated 2,000 times! My fitness tracker showed my heart rate at a cool 121 beats per minute. I tried my best to stay calm so she wouldn’t notice.

“I needed to get Kelly on the beach where Cheryl was waiting, so I told her I wanted to take a photo of the lifeguard stand for Instagram. It was a very gray day and there were what seemed like 50 mph winds. I had to ask her several times before she finally gave in to going down into the sand. Kelly initiated conversation with Cheryl and fell right into the trap – I mean, my plan! The rest happened so fast. I grabbed Kelly’s hand, began to speak, then got down on one knee. She immediately knew what was happening and the look on her face was priceless. I was nervous and stumbled my words. She didn’t even remember what I said. We were so grateful to have Cheryl there to capture this unforgettable moment!”

Kelly:  “I’m actually still in shock about the proposal, as I definitely did not see it coming. We went down to Florida to stay at my parents’ house outside of West Palm (in retirement central) for a relaxing quiet long weekend, just the two of us. Jay suggested we go into West Palm Beach a little early before our flight home, since there was a lifeguard stand he really wanted to take a photo of (he’s very into the perfect Instagram shot!), and I agreed. We were walking along the beach at 4:15pm (the exact time he said was best for this ‘perfect shot’) in the strongest winds and most gray skies ever, when Jay suggested we go down right down into the sand.

“After I refused a few times, we finally went down to the beach for Jay to get this perfect shot – where he stood right in front of a photographer taking pictures of the ocean. I told Jay to move, and she said it was fine, that she was waiting for a couple who was late for a photo shoot. I asked if they were doing an engagement photo session, and she said, no, it was for a couple who had been married a couple of years. I responded, ‘Oh good, because this is HORRIBLE weather for engagement photos.’ (Oops – sorry, Jay!) She said that the sky was actually awesome for photos and offered to take a shot of us to ‘test the lighting.’

“After she took a photo or two, I walked over to give her my email address to send us the pictures, and Jay took my hand and started giving me this romantic look; all I could think was, ‘Wow, he’s going to be so into engagement photos if he’s this into a stranger taking our photo on the beach!’ – but then when he took both my hands and said my name, I couldn’t believe it. I was in absolute disbelief as I exclaimed, ‘Holy ***, are you kidding me right now?!’ He continued to get down on one knee, and he proposed with the same ring that my dad (who passed away when I was a baby) had given my mom over 35 years ago – from inside a box Jay had carved himself. We then had a full engagement photo session with Cheryl – who was absolutely right, by the way: the sky was perfect. I am so incredibly grateful she was there to capture the pure shock on my face and one of the best moments of my life.”

Looking to capture the most special moment of your life? See more proposal inspiration HERE!

Enter to win a free shoot!

8 54 Best places to take pictures in Dubai, UAEDubai’s combination of old and new, quaint and modern, city and desert is a...