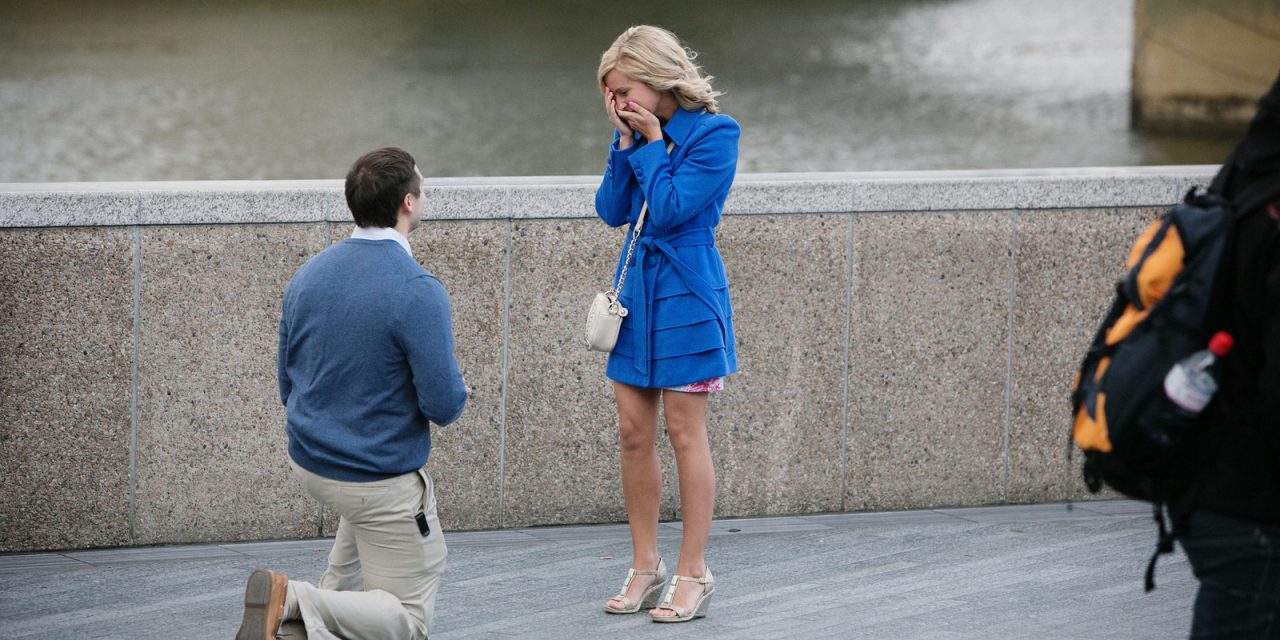 We arranged for proposal Flytographer Julie to secretly follow them from the tube station and capture the moments leading up to the proposal, all the while remaining hidden from Katie. Then, 10 minutes after the proposal, Julie would show up for a “pre-arranged engagement shoot”.  View the entire beautiful proposal unfold below… 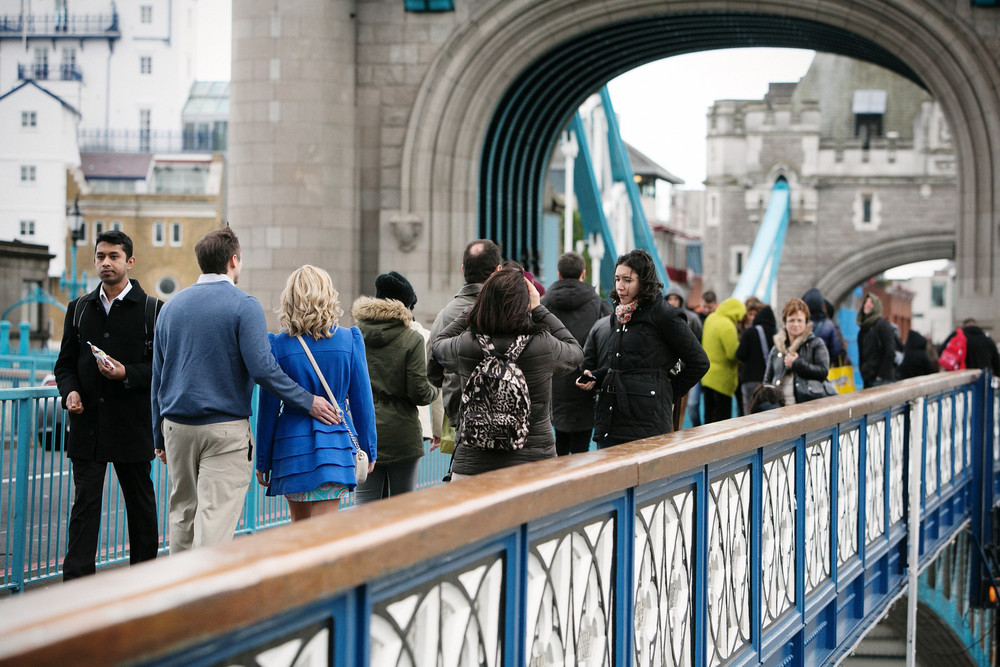 Julie stalks them like a stealth ninja across the Tower Bridge…

Proposal story, in Katie’s words: “On our first night in London, Kevin had planned a nice dinner to celebrate our first trip to there together and after a full day of sightseeing, we were both looking forward to the dinner! We had planned on taking the tube from our hotel to the Tower Hill stop so we could walk across the bridge and I could take a few photos before dinner. Kevin seemed to be a little stressed out once we found out the tube was under construction and we had to take a cab over to the bridge ( little did I know a photographer was supposed to follow us once we got off the tube). Once the cab dropped us off by the bridge, Kevin was adamant about walking up to the tube station to “check the schedule”. That’s when Kevin and Julie, from Flytographer, made eye contact (without me knowing) and we began our walk over the bridge and off to dinner, or so I thought.

Kevin starts to pull out the ring.

Katie starts to realize what is happening.

“On our walk, I kept wanting to stop to take pictures but Kevin was speed walking and kept saying, “not now, we’ll take some when we get the other side.” Once we got to the other side of the Tower Bridge, I managed to get one photo in before Kevin began to act a little off. He then took my hand and began to express how he felt about me and how much he loves me. He told me he wanted to travel the world with me and spend the rest of our lives together.  He started to get down on one knee and I began to realize what was happening! I started crying with excitement! 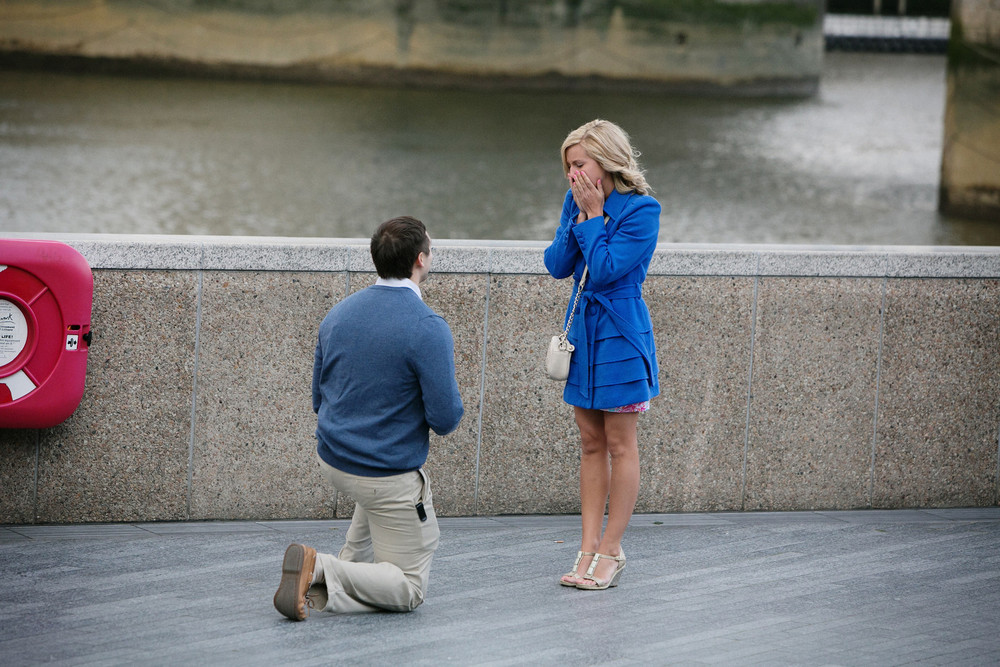 He asks the big question…

“Kevin pulled the ring box out of his pocket and asked me to marry him! I tried to get some kind of word out of my mouth but I just couldn’t, so I just continued to cry and nod my head “yes” ALOT! After he slid the ring on my finger and I calmed down a bit, I officially said “yes.” 🙂 We then took a few pictures ourselves and I thought we were on our way to dinner. 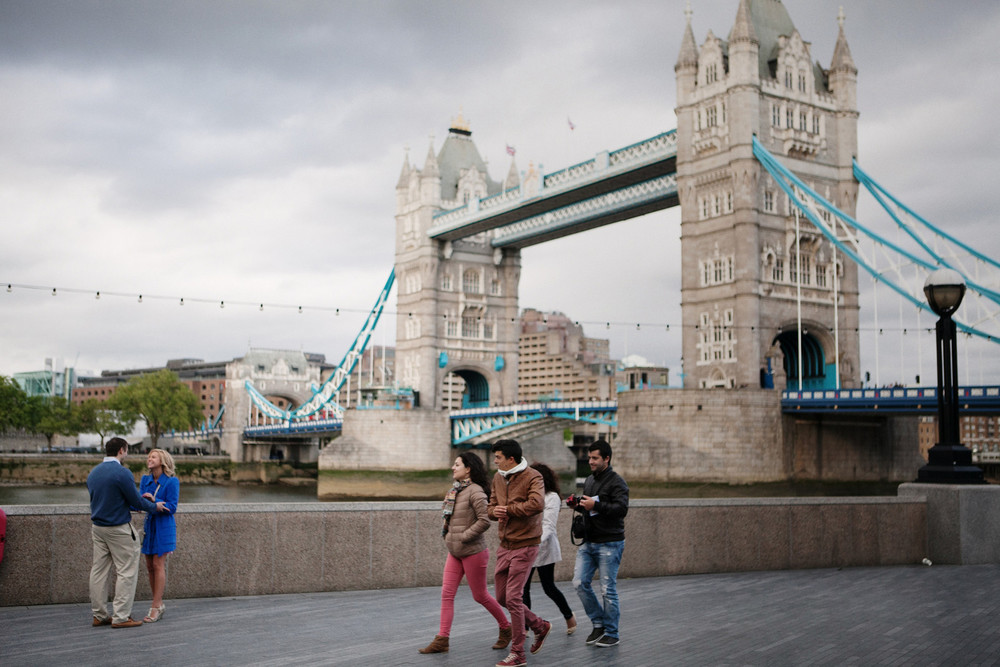 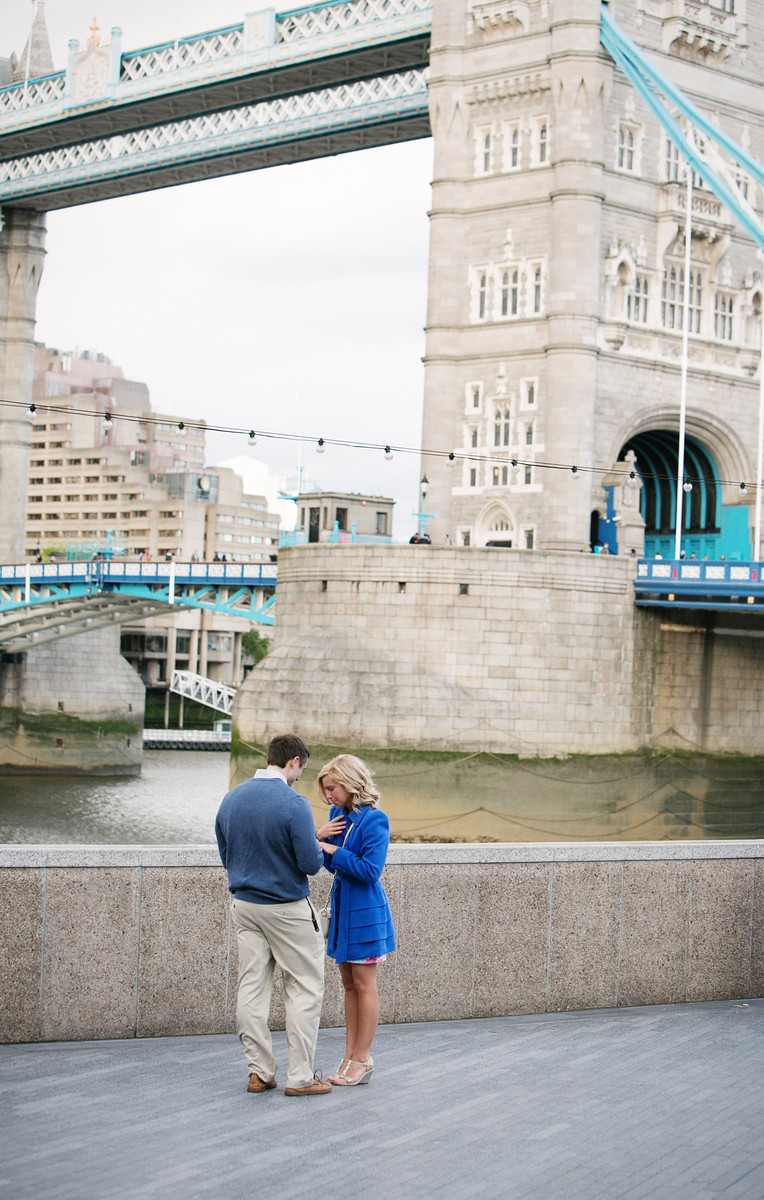 “However, Kevin had another surprise up his sleeve. He told me we were meeting with a photographer to take engagement photos! We then met up with the photographer, Julie, ( who had been with us the entire time still without me knowing) who lead us around the area and took some beautiful photos! We ended the photo session at a local restaurant, where we celebrated with champagne and dinner. 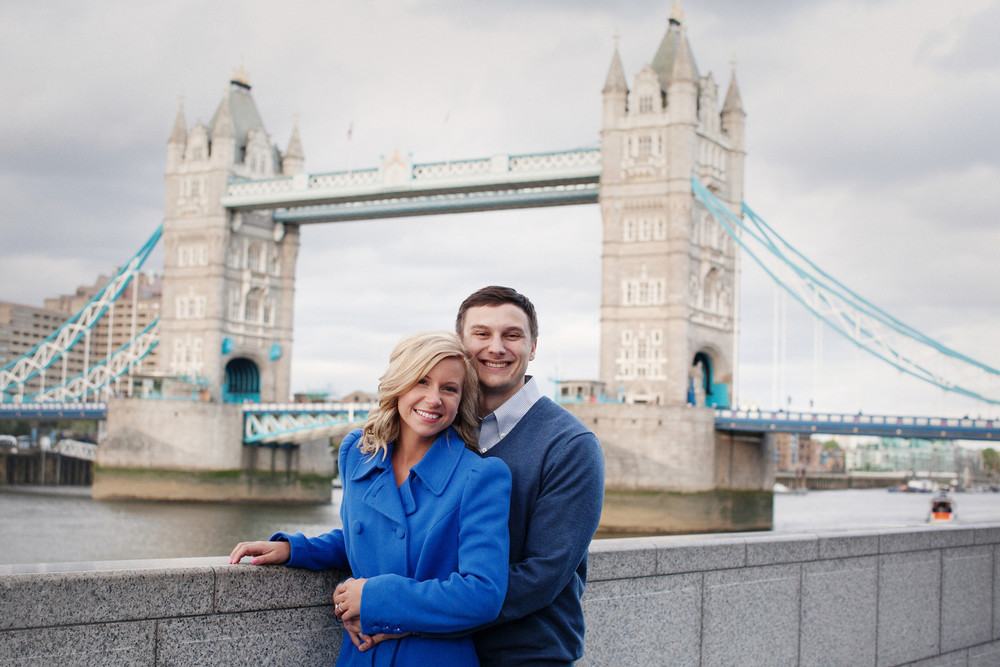 “After dinner Kevin and I were still on cloud 9 and couldn’t wait to get back to the hotel to call our families! We stayed up until 3am talking to everyone!

After our week long vacation to London and Paris, we returned to the U.S.  A few weeks later Kevin told me he had yet another surprise for me! I couldn’t imagine what it could be! He then reveled that Julie had been with us the entire time and showed me the pictures she had taken of our proposal! It was amazing!

Our proposal was such a wonderful way to start our vacation and a new chapter in our lives, and the secret proposal pictures were the icing on the cake! I can’t wait to spend the rest of my life with such a wonderful man!” – Katie 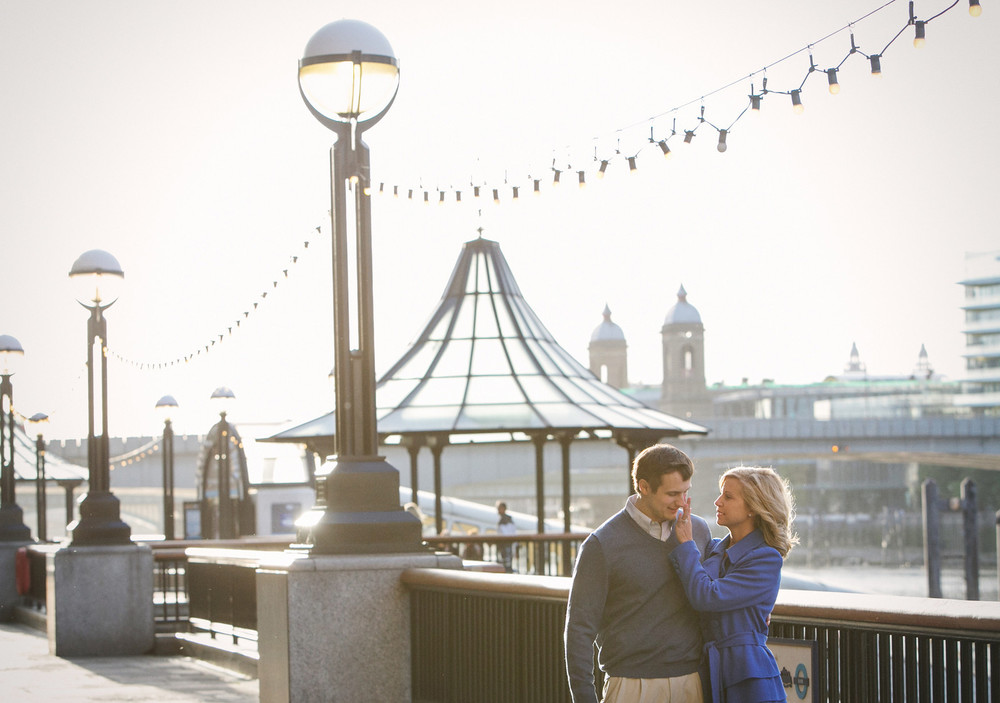 “When Katie found out I had secretly photographed our proposal too, she was very excited and surprised!!  She could not believe that I had captured the moment.  Websites for “Save the Date” cards were immediately pulled up with her happily plugging in these new treasures!” – Kevin

“We originally met when we were very young.  My younger brother (3 years) and her older brother have been best friends for as long as I can remember so I always knew of Katie but since we are over 4.5 years apart I never thought of her in a romantic sense and we didn’t really have much interaction.  Years later when I was about 27-28 (Katie 23-24) I saw her a few times and thought that she was really cute, but the timing was never right.”  – Kevin 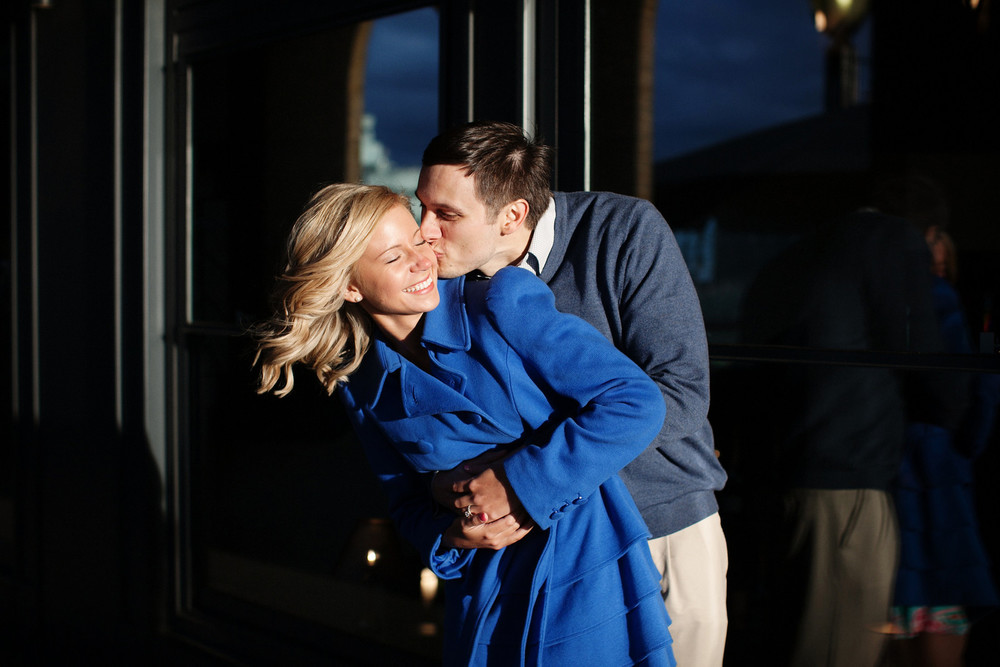 “Almost exactly 2 years ago my brother (the one who is best friends with her brother) got married.  Katie and I began talking at the rehearsal dinner and the the rest is history!

Last summer I had already started to formulate this plan and knew that Katie had always wanted to go to London her whole life.  So, I asked her where she would want to go that coming spring (knowing that she would pick London) and the first part of my plan was set.  With her thinking she came up with the idea ;)” – Kevin

“A year ago I received a vascular surgery residency offer from a hospital in Springfield, IL.  Katie and I had been dating for almost a year and for most people this would be a crossroads at which a difficult decision would have to be made.  For us it was easy.  Was it a little scary?  Of course!  But we decided right then that we needed to be together and Katie moved with me to our new home town.  We have only gotten closer to each other since moving in together in a new place and can’t wait to get home to Baltimore, MD for our wedding next May!” – Kevin

“We LOVED our entire trip (London and Paris) but honestly the highlight was the engagement and the photo session afterwards.  Doing this at the beginning of the trip was great!” – Kevin 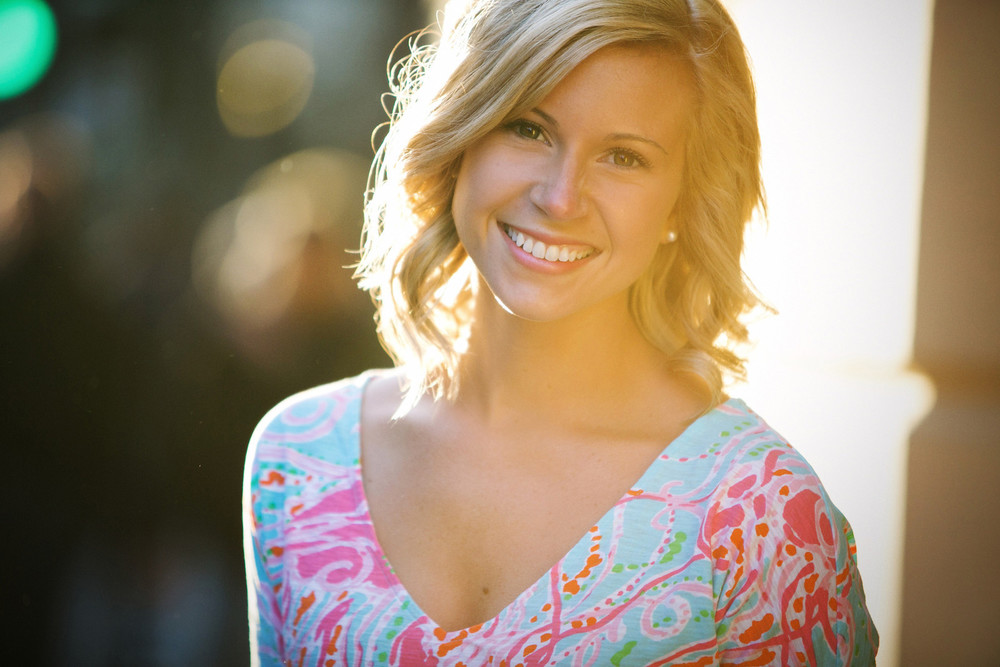 “My favorite thing about Kevin is his easy going attitude and his ability to make me laugh and feel comfortable in any type of situation.” 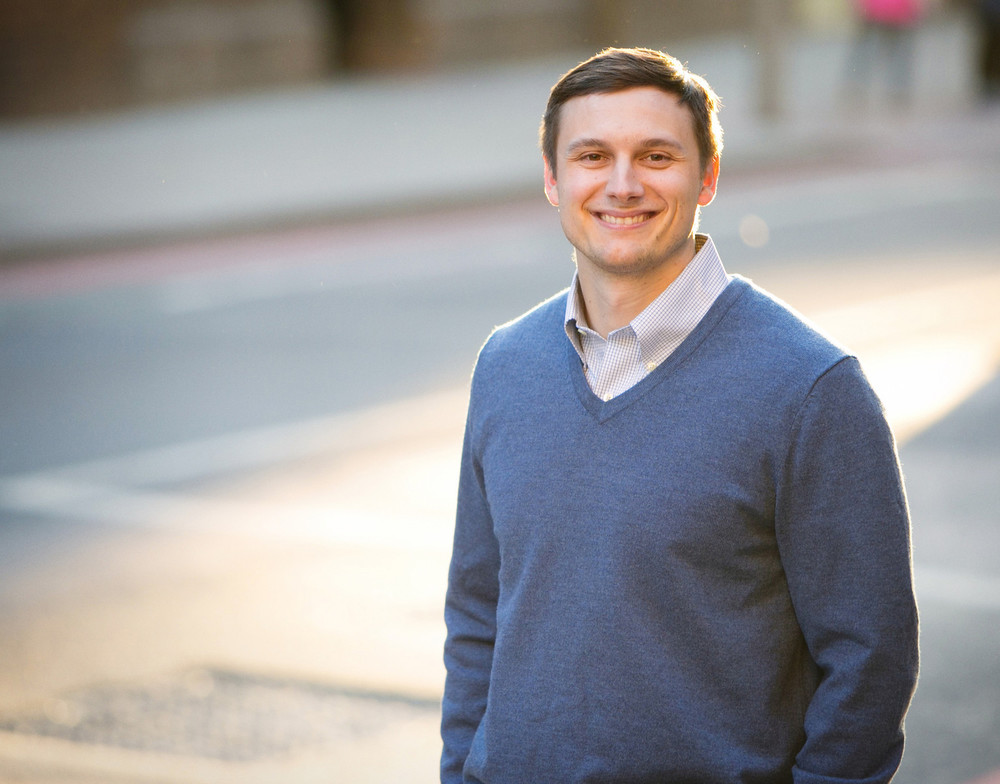 “My favorite thing about Katie is the way she makes me feel.  I have never been as comfortable and confident as I am with her.  She is laid back and level headed.  As well as a great combo of a girly girl and at the same time able to wear a Ravens jersey and drink beer at a football game!”

Kevin and Katie: we wish you both all the best, and Katie, we hope Kevin keeps “surprising” you in wonderful ways.