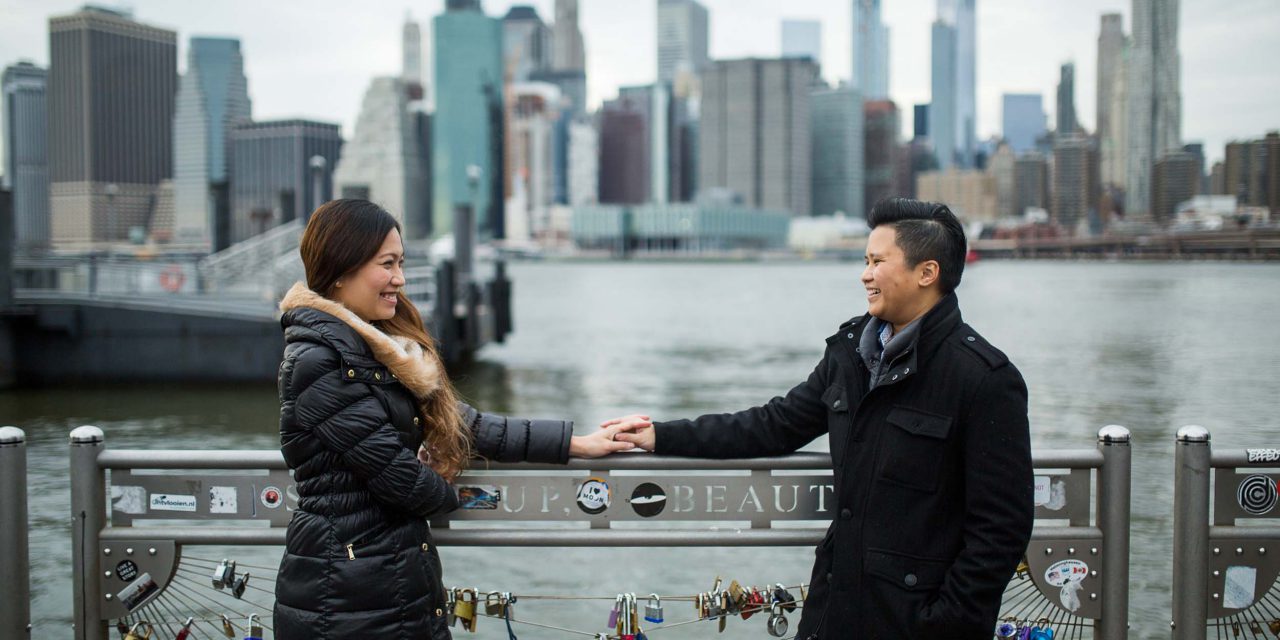 We just love happy endings and even though they lived an ocean apart when they first met, distance ended up being just a minor obstacle in Marione and Joyce’s love story. Read on for the details of their super sweet New York City proposal photoshoot. We met through a mutual friend. I was hanging out at that friend’s house and she trick to kick me out because she needed to pick her friend up from the airport, which was Joyce, my now fiancée. I didn’t want to go home yet, so I offered to drive her to the airport. Joyce was just visiting the U.S. from the Philippines for three months. We didn’t start dating right away because she had a girlfriend back in the Philippines. She travelled to Las Vegas, South Carolina, Virginia, Maryland, and New York. By the time she made it to Los Angeles, she was single, so we started hanging out more, which led to us dating. When it was time for her to go back to the Philippines, she told me she would come back. She originally planned to move to the U.S. in June of the following year, but she decided to move earlier and moved in January instead. I know she took a huge risk for me, but everything that happened has been worth it. New York City was the first trip my fiancée and I took when we started dating. We officially became a couple during that trip and we fell in love with the city. Ever since, we kept returning to NYC together, so I thought it was fitting to propose there. I had been planning our proposal for a while, but I didn’t find Flytographer until the week before. I chose DUMBO for the proposal location. When we were at the location, we were just mesmerized with the view. That was the first time we went up close to the Brooklyn Bridge since we had always run out of time when we visited previously. While we were enjoying the view, we started talking about how it feels so good being in that moment. Then, I started singing her a song. Towards the end of the song, I kneeled down and popped the question. At first, she was saying no, and later explained that she wanted someone to take a picture. She said she was thinking of asking Johnny to take a picture of us since she saw him near us. Little did she know, he was there to do just that! Bottom line is she said YES! If you liked this story, here’s a few others you might also enjoy:

Get Lost in New York with Flytographer and The Plaza

“I look out the window and I see the lights and the skyline and the people on the street rushing around looking for action,...