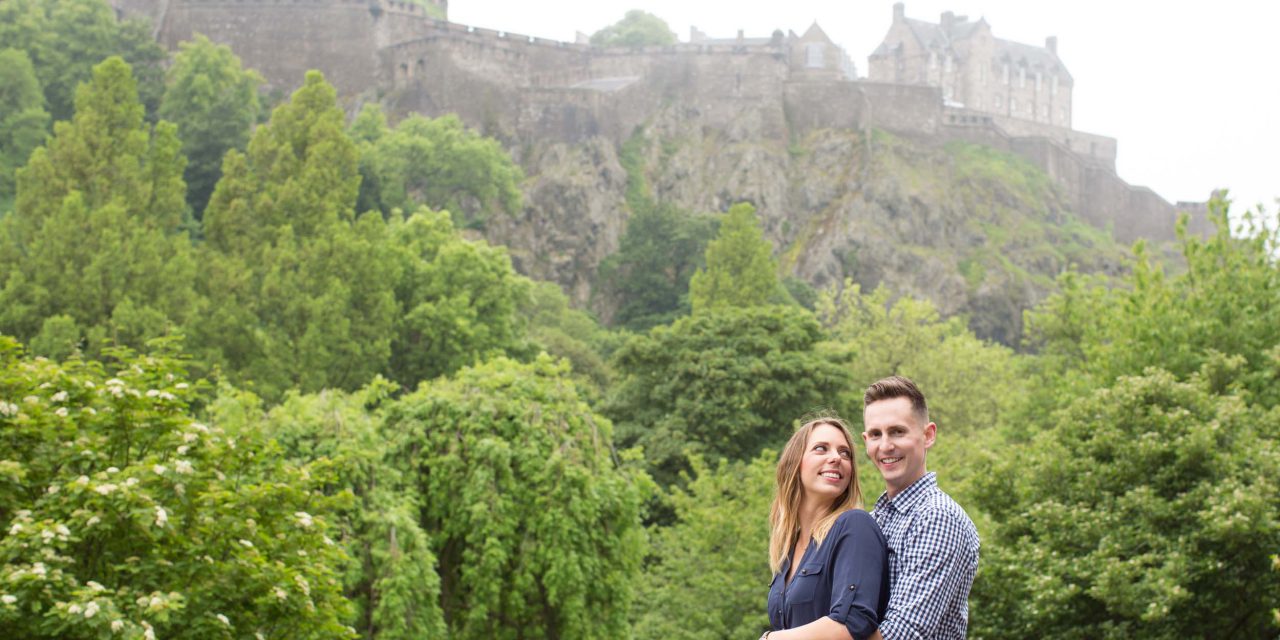 Jessica and Justin met over swing dance lessons in college. After a slightly awkward start and thirteen years, he planned a super special Edinburgh proposal. Read on for how it went down.


“We met in university when I was 19 and Justin was 22. It’s hard to believe that was 13 years ago! Justin was teaching a weekly swing dance lesson at a local coffee shop and I went one week with some friends to take the lesson. We became friends over the course of a few months, but that all changed when Justin kissed me one night after I drove him home. He’d been pretty aloof and I was so surprised, I didn’t kiss him back! It took a bit of effort on my part to get him to try again, but we’ve been together ever since.” – Jessica


“Jessica and I had been hanging out every week at the dance. We also saw each other at a pub where dancers would go to see a live band. I was into her and a friend of mine had brought it up to me saying, ‘You know she’s into you right? It’s so obvious.’ She often gave me a ride home after the pub and each time I felt we had a ‘wish we didn’t have to say goodbye’ moment in the car. One night, I decided to make my hopes a little clearer and leaned in and gave her a kiss. No response. Nothing. Absolutely nothing. I remember getting out of the car and walking into my apartment thinking, ‘Wow, did I misread that.’ I can’t remember if it was the next day or a few days later, but she asked me out to lunch. After the lunch, I still wasn’t sure if it was a ‘Hey, you should try that again’ lunch or a ‘That was weird. Let’s forget it happened and still be friends’ lunch. We’re better communicators now.” – Justin


“I had booked Flytographer to celebrate our 13th anniversary while we were in Scotland. We were travelling around the UK and I thought it would be great way to mark the occasion! Justin contacted Flytographer on the sly and organized the proposal with them.” – Jessica

“I wanted the proposal to be memorable. I was developing a few ideas in my mind. One idea was going back to the café where we met. When we decided we were going to do a vacation and Jessica pitched the idea of a Flytographer shoot, it made me think engagement photos would be a great idea. My original plan was to try to hire a photographer behind Jessica’s back. I was going to have the photographer meet us at a predetermined location and discretely hang nearby keeping an eye on us until I gave some kind of signal. The potential for error here was huge. After coming up with an incredibly complicated plan, I realized I should just contact Flytographer behind Jessica’s back about doing the proposal during the already scheduled photo shoot.” – Justin


“After I mentally committed to proposing, I went ring shopping for the first time. It was a 15-minute trip as I learned that you should have some idea of what you want BEFORE you go shopping. I had to enlist one of her close friends to help me get some insight into what kind of ring styles she liked. Based on the feedback from her friend, I picked a ring style and designed the ring.” – Justin


“Justin is terrible at being sneaky, so I knew about the proposal. He’d left a ring sizing chart on the printer at home and I found it one day when I went to print something. I pretended I hadn’t seen it, but it sat there for weeks afterward! I had a pretty good guess he would propose during our photoshoot, but a glimpse of an email with our Flytographer on his iPad confirmed it! While I would have loved to have been surprised, I don’t mind that I knew in advance. It’s something that Justin would totally do – so it makes the story unique to us! Plus, it meant that I had a month of build up to the actual day, moments where I could think about it and smile.

“After being together for so long, we’re pretty familiar with each other. The one surprise since getting engaged is how it has changed things. I think it’s brought us closer and made us look into the future with more excitement.” – Jessica

Located on the west coast of Scotland, the capital city of Edinburgh is an ideal destination for those who love exploring...