Love Around the World

Ever pondered whether someone might be proposing right this moment? With a couple getting hitched every 1.3 seconds around the globe, chances are ten folks have popped the question by the time you get to the end of this sentence. At Flytographer, we’re lucky to capture magical proposals right in front of our lens; the resulting photographs often rendering even our most stoic colleagues teary. Break out the tissue because we’re sharing the romance! Every month we’ll be rounding up our favourite proposals, making you smile and inspiring moments of compassion with our new series, “Love around the World.” 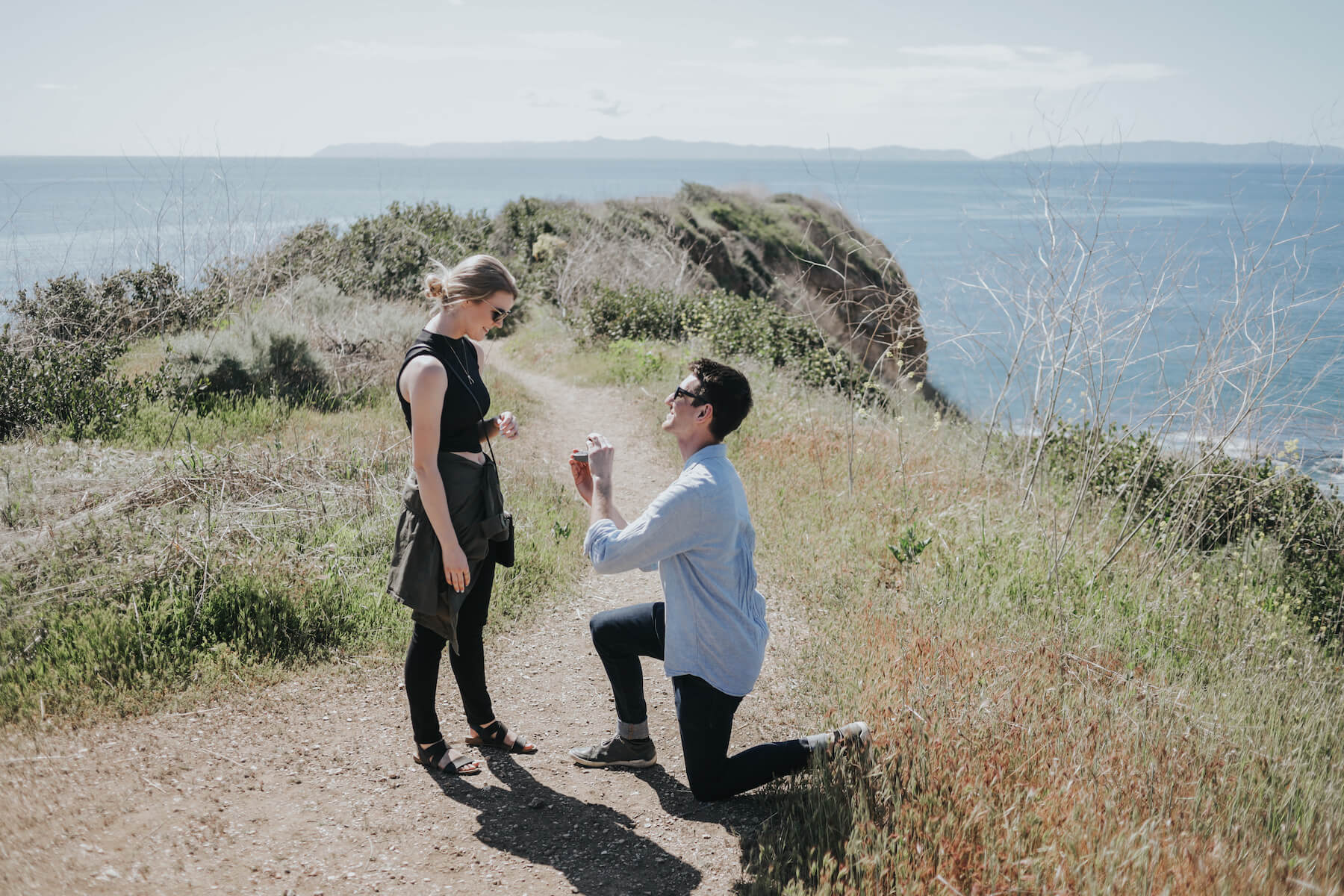 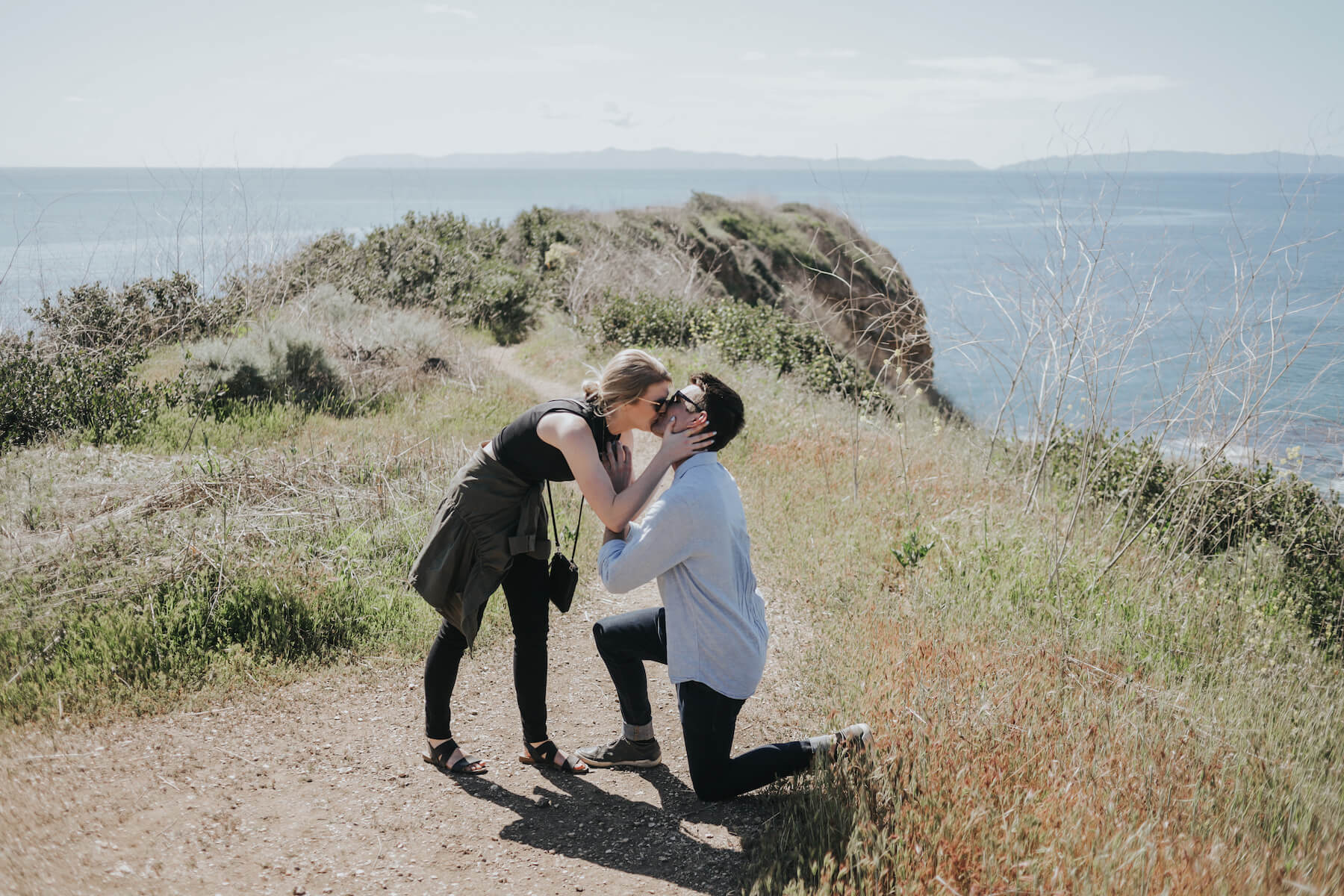 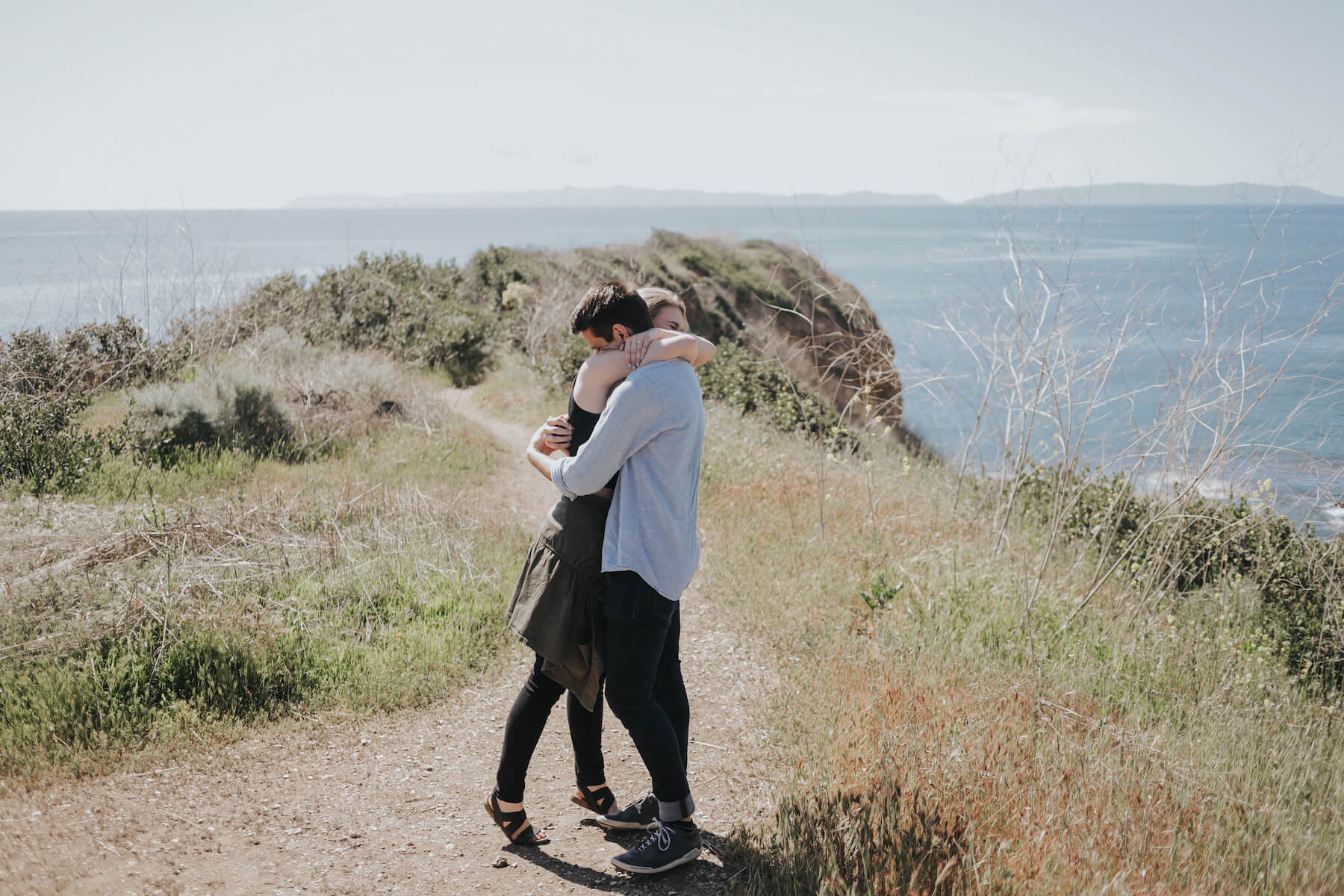 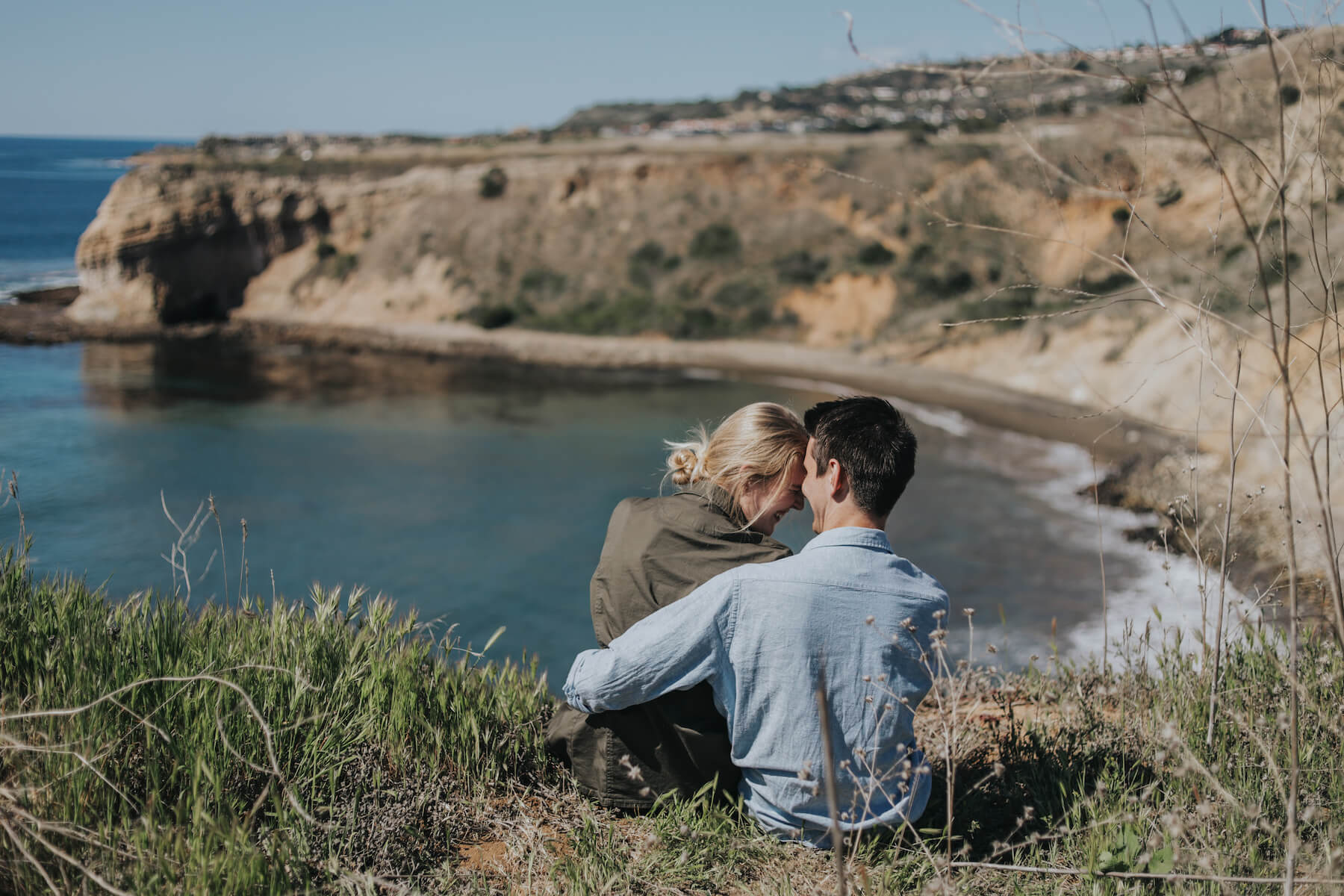 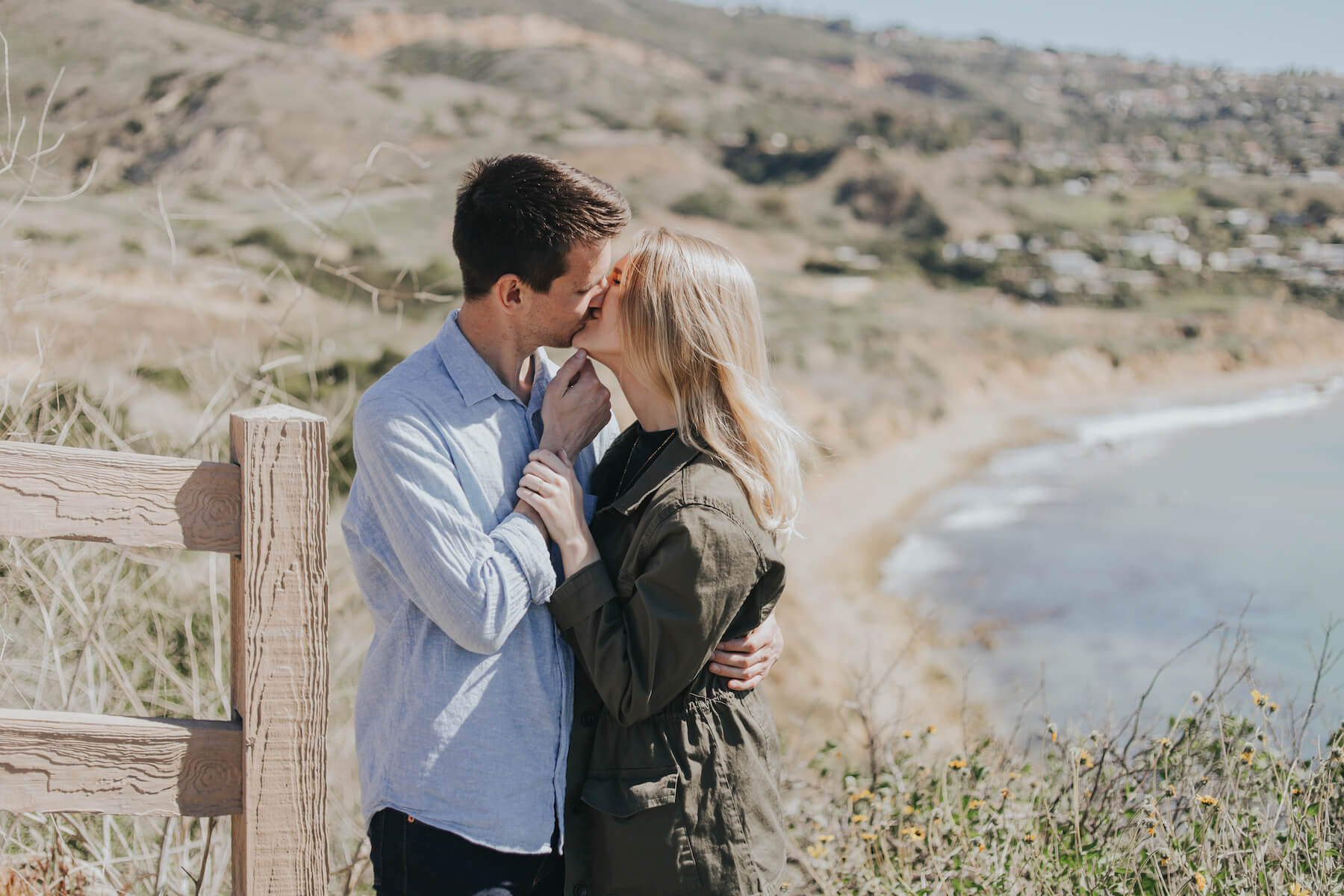 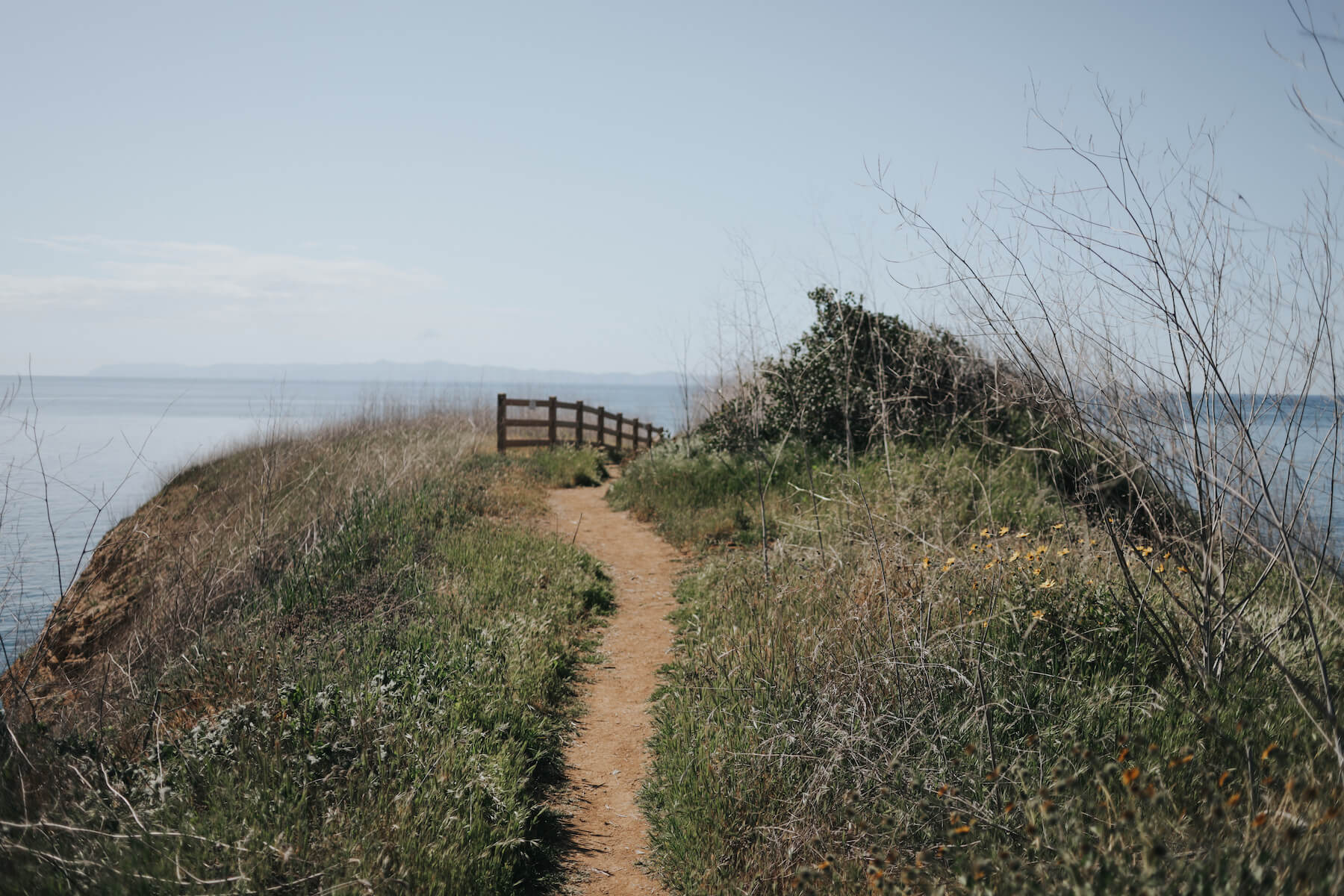 Love Story: “We met in high school and started dating right towards the end of it. I pretty quickly knew I loved her and by the back end of College I knew she was the one. We made it through thick and thin and we always had fun and kept each other laughing.”

Proposal Moment: “I proposed on a hiking trail in Palos Verdes looking out into the Pacific and towards Catalina Island which we were heading to later that day. I set up two “fake outs” for my fiancé, Alli because I thought she was suspicious. First I took her to one scenic view called Portuguese point and gave her an anniversary gift. I thought the gift would make her think that the proposal wouldn’t happen today. The second fake out was that we got to the end of the hike and I turned around to start walking back to the car. I thought that would make her think again it wasn’t going to happen. Luckily for her our photographer was waiting just a bit further up the trail so I could get down on one knee and surprise her with the proposal.

Jenny was amazing. She did a great job acting like a normal hiker and pretending to be uninvolved. She even made a last minute adjustment to the proposal location which turned out to be amazing. It was more scenic than my original spot and it was on our route anyway. After the proposal we had a really fun session and Jenny made us feel confident and laugh while we took more photos.” 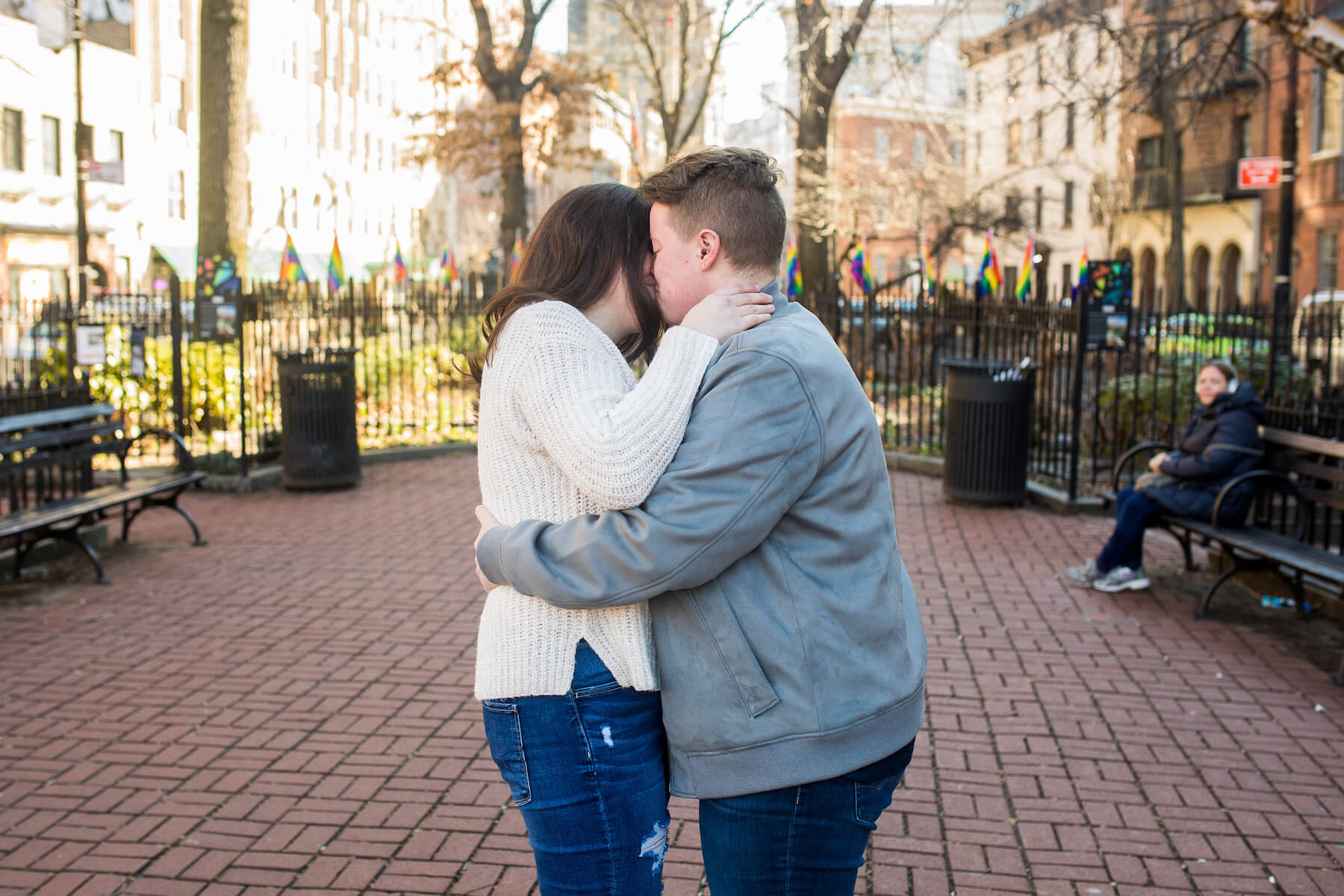 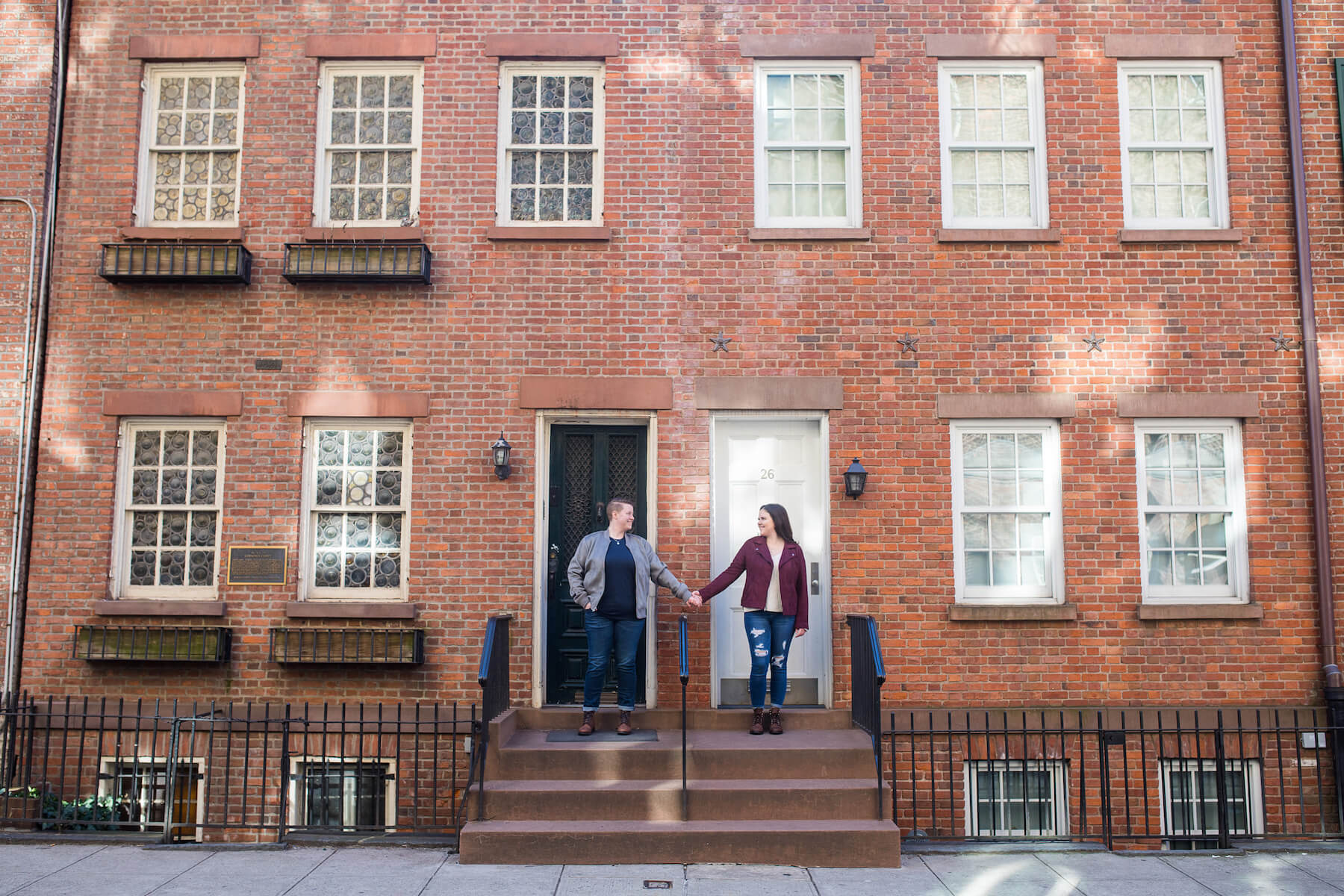 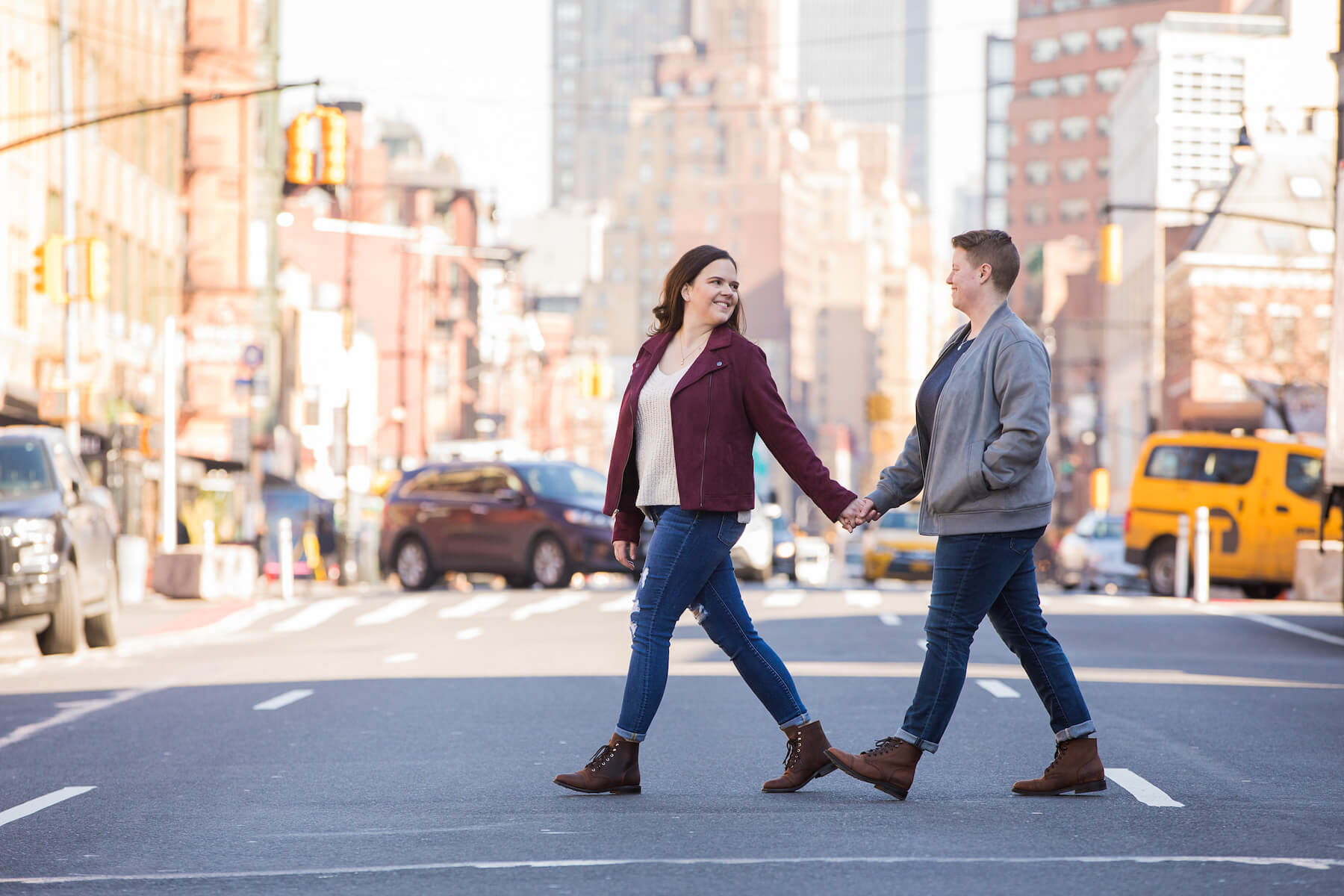 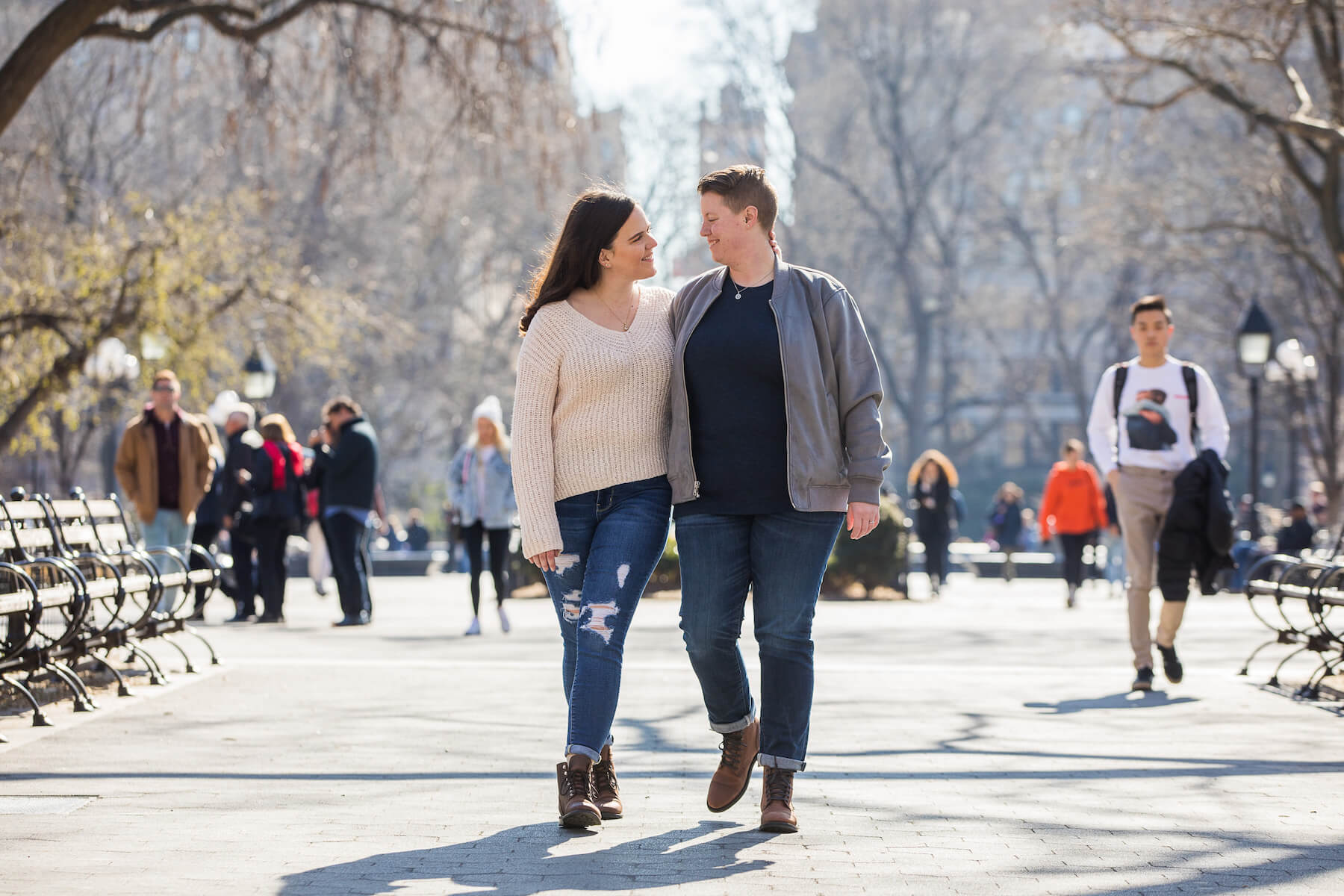 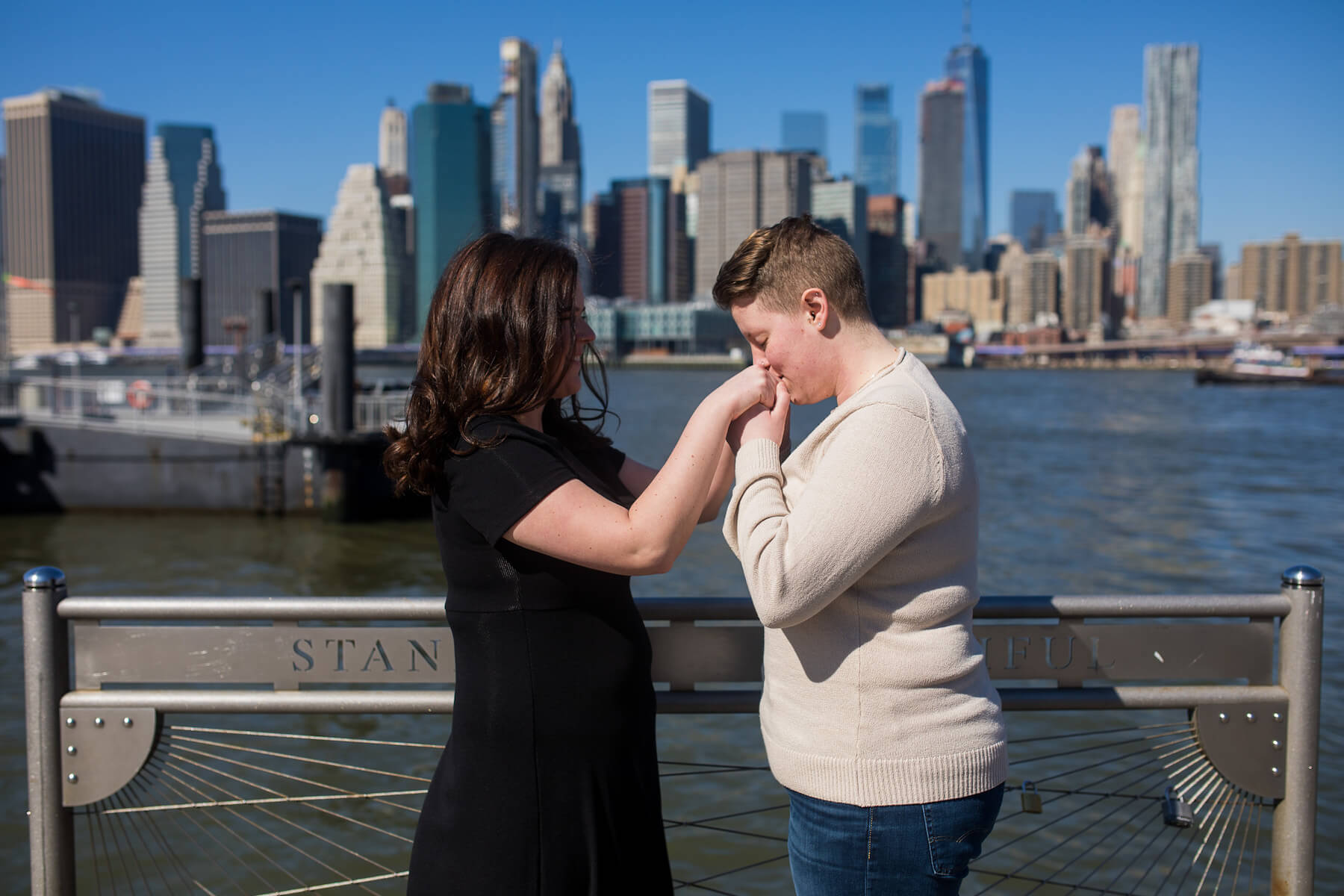 Love Story: “We met online! Our distance was outside of each other’s app search parameters, so we’re still not sure how we got lucky enough to match. I realized I was in love with Becca after about 6 months of dating when we went to NYC for Pride. I proposed in Christopher Park in NYC, the site of the Stonewall Riots in 1969 that marked the beginning of the modern gay rights movement and current location of the yearly pride festivities. I fell in love with her beautiful eyes, sense of humor, confidence and care-taking nature to her friends and family.”

Proposal Moment: “I got her to Greenwich Village by saying we were doing an LGBT history walking tour. Once in the park, our photographer pretended to be associated with the tour and I asked him to take a picture of us while we waited for the tour to start so he could block us out in a good spot. Immediately after I got into position and onto one knee. I was so nervous and I think my partner and I both blacked out a little while it was happening!

Johnny was great to work with. He was very responsive to texts and emails during the planning phase. He had great ideas about where to take pictures and they came out lovely.’ 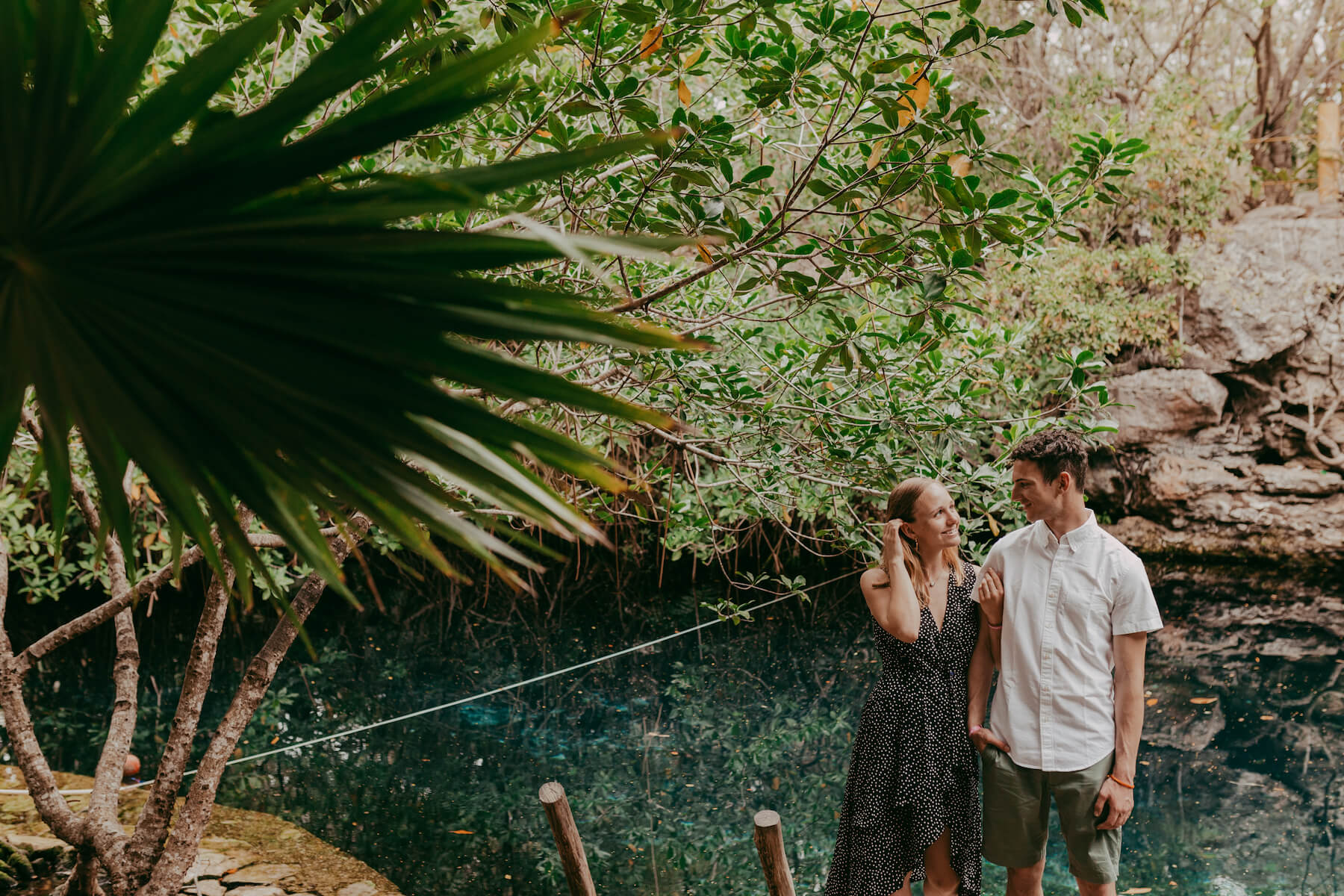 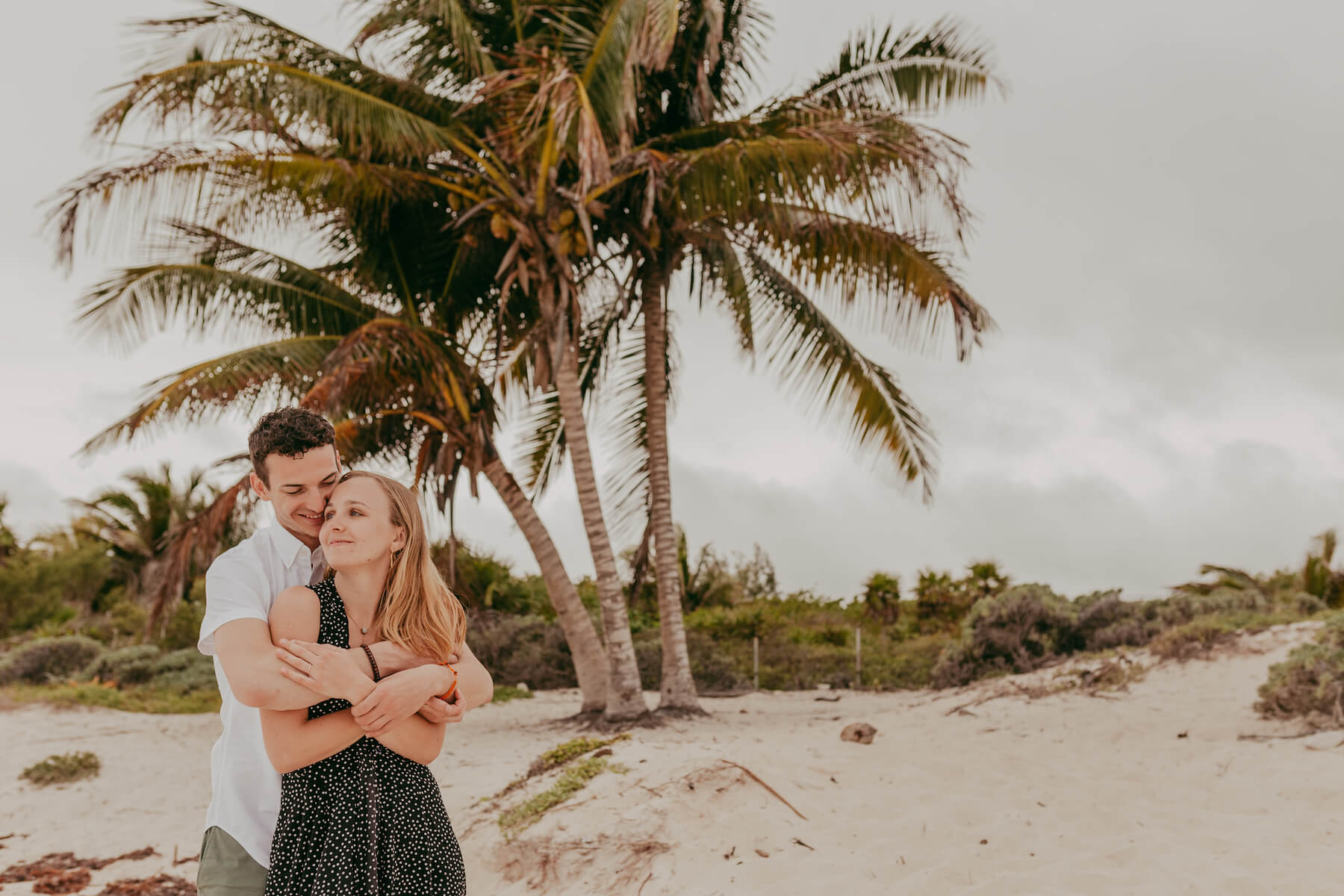 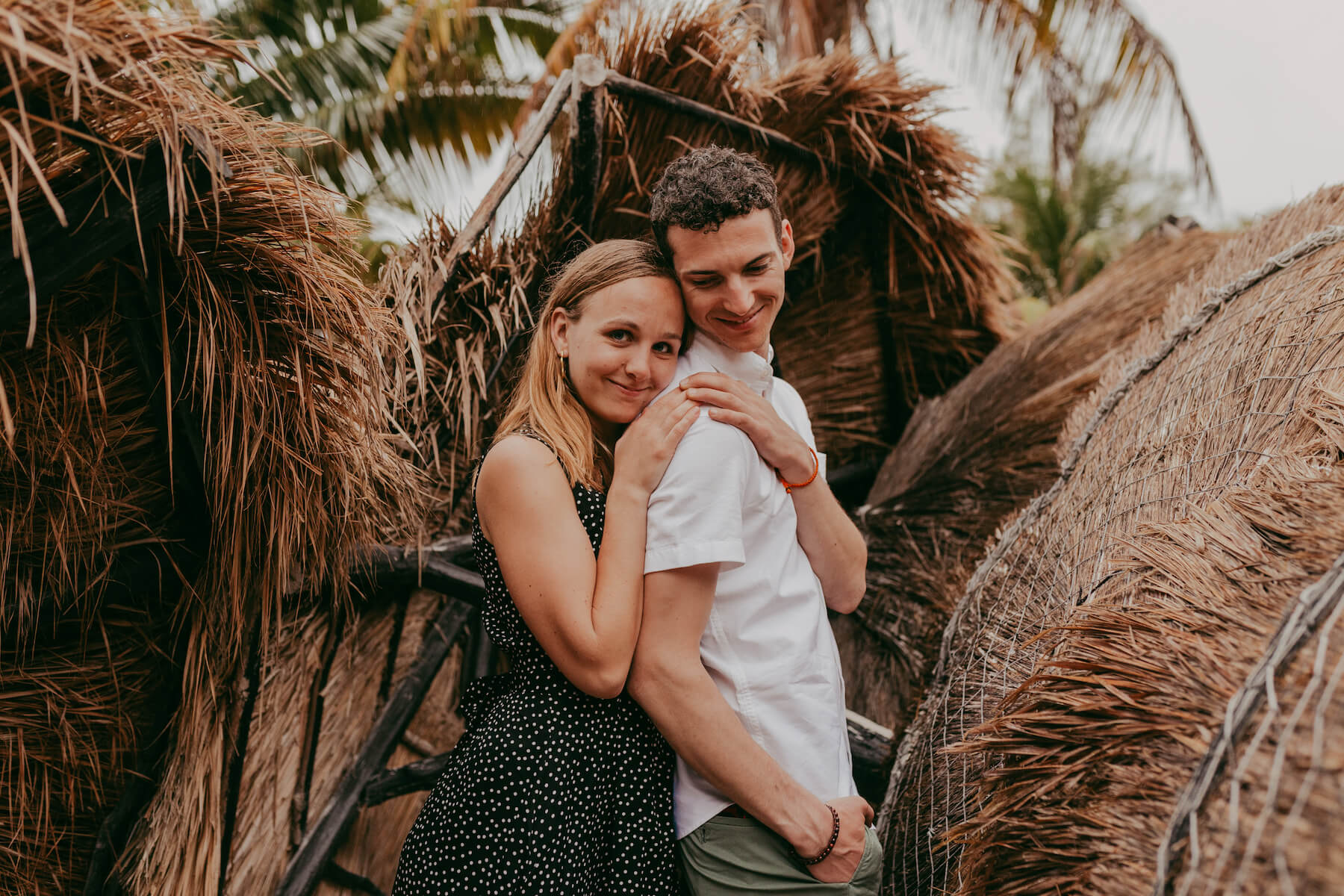 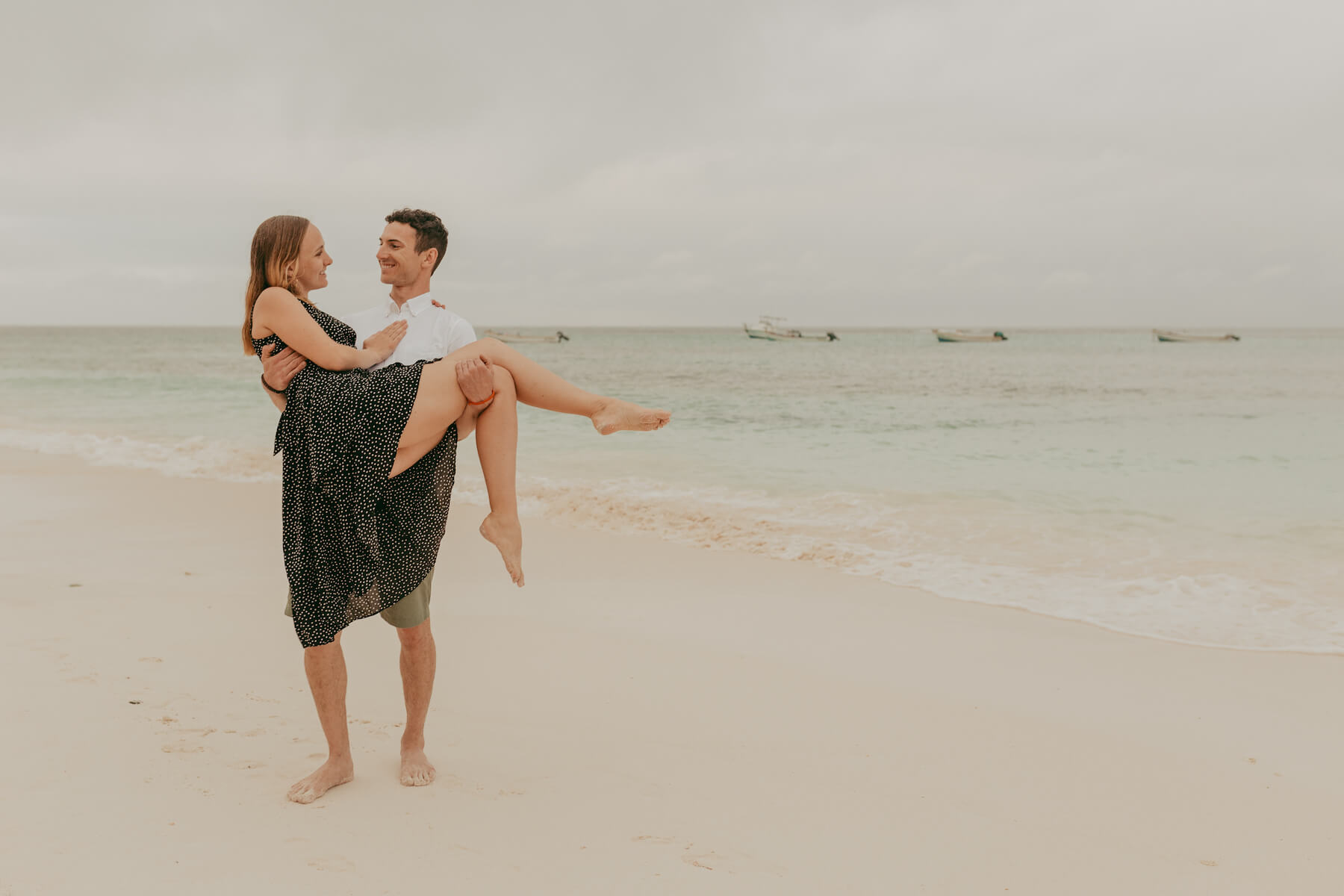 Photo: Claudia in Tulum for Flytographer

Love Story: “We met in college in an engineering class. She asked for my number so we could study later, and we ended up being a perfect match! I knew she was the one after we went on many adventures together, and moved in together.”

Proposal Story: “The day of the proposal was really busy! We visited ruins in Coba in the morning, went snorkeling in another cenote in the middle of the day, and ended up making it to Cenote Cristalino for the proposal right on time, dressed in our nicest clothes from the trip. I still caught her by surprise, even though she may have suspected something was different. I love that her eyes were watering with tears of joy before I could even pull the ring out of my pocket. I loved our special moment, and how well it was caught on camera. It was in a nice private area which we both always wanted for our proposal moment, and I’m so glad everything went according to plan. I’m thankful for my friends’ help in planning the ideas, and for Flytographer’s help in realizing the dream proposal!

Claudia was an excellent photographer to work with, and she did a good job soothing my nerves before the shoot with weather concerns. I couldn’t be happier with the photos we got back from the shoot, and the photos came back really fast as well! I recommend Claudia to anyone hoping to do a photoshoot in Tulum or Playa del Carmen.” 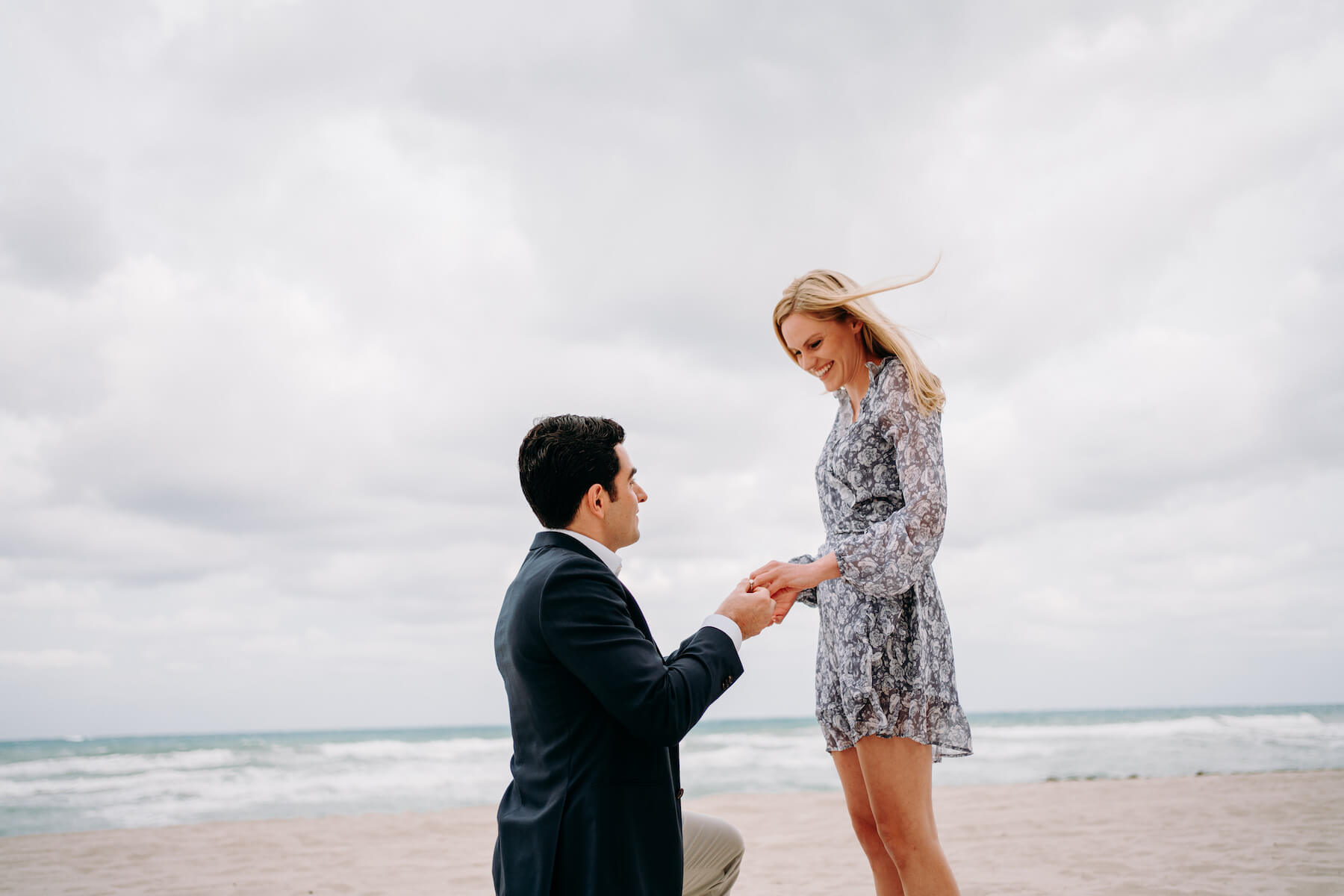 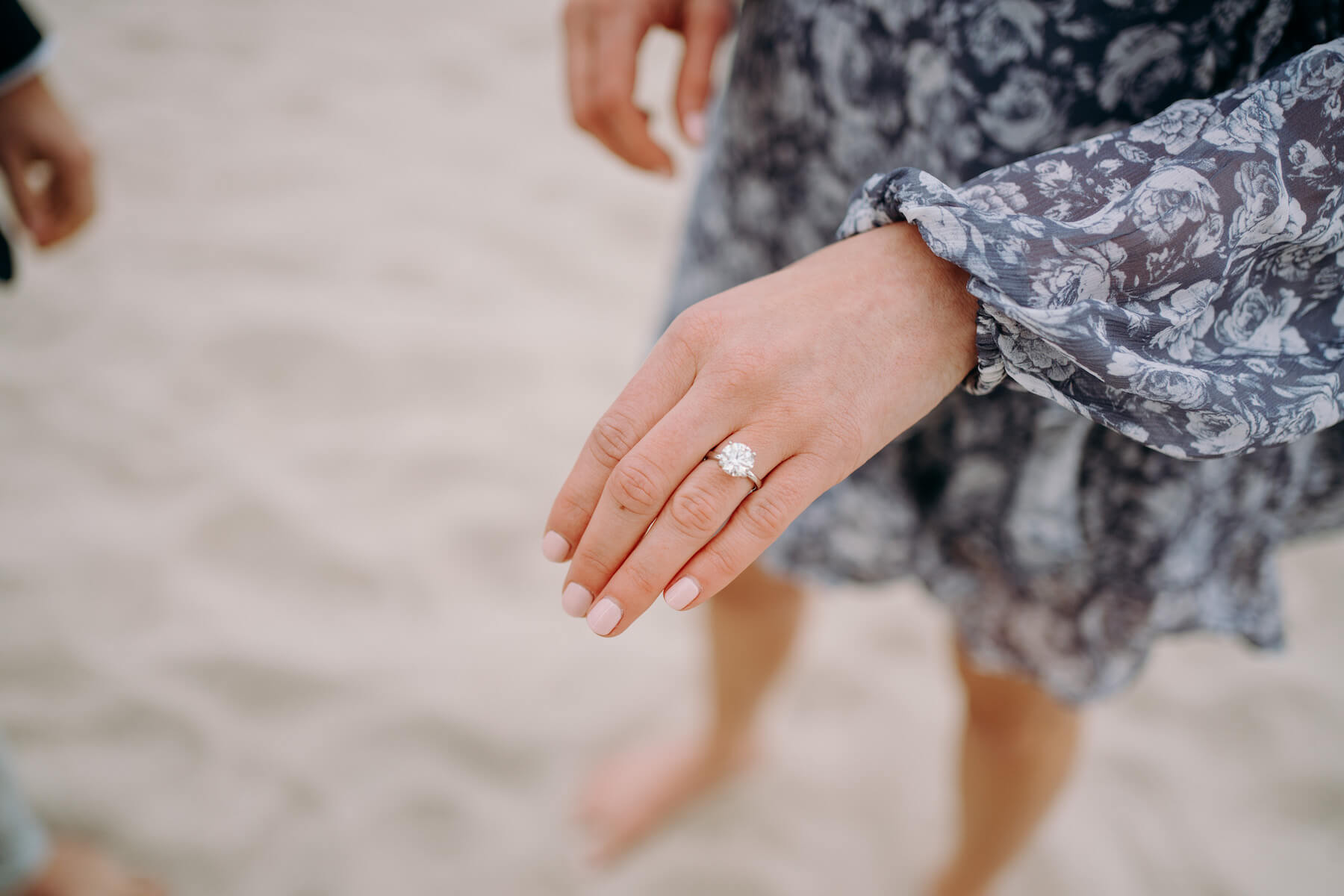 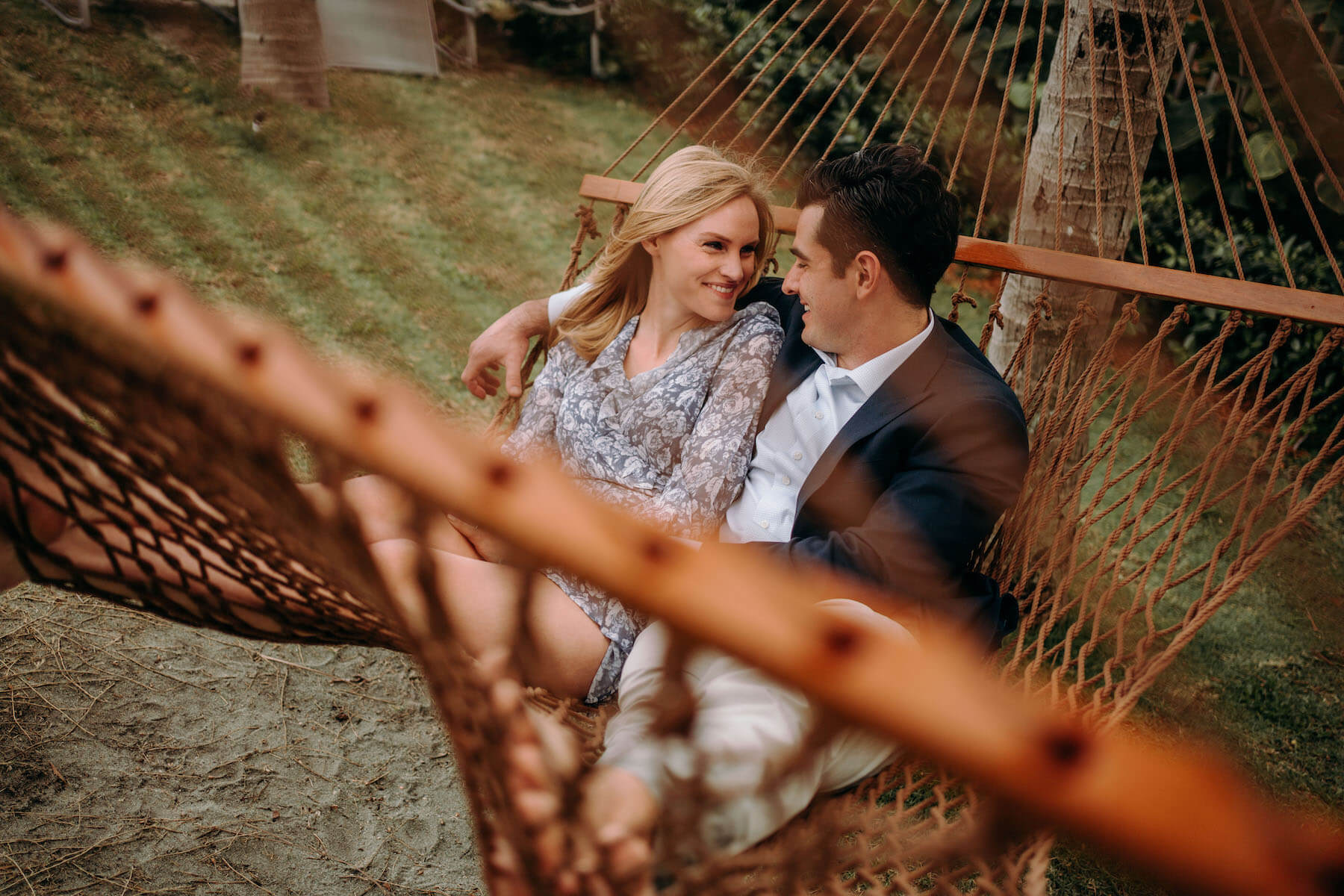 Photo:Yohskarla in Miami for Flytographer 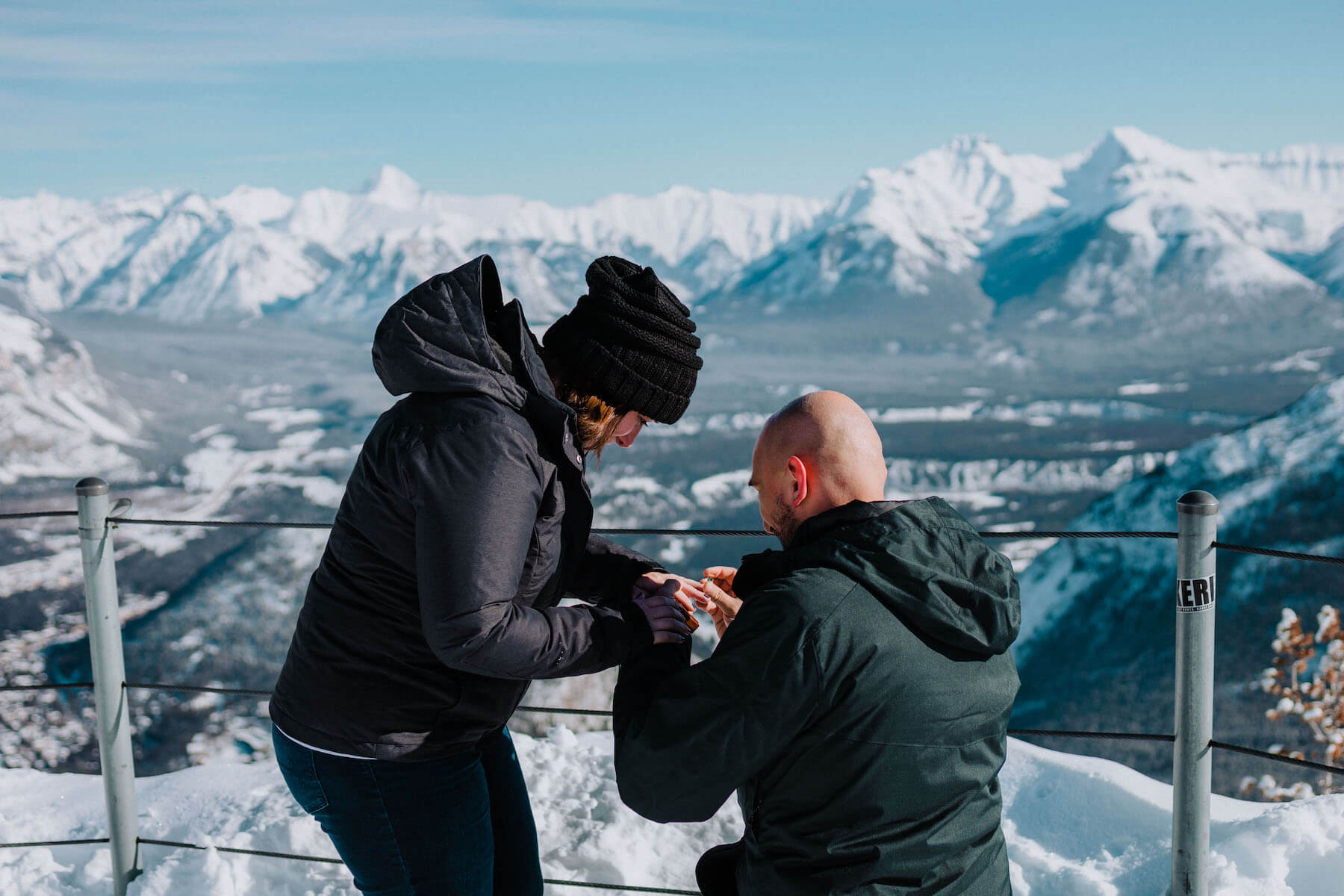 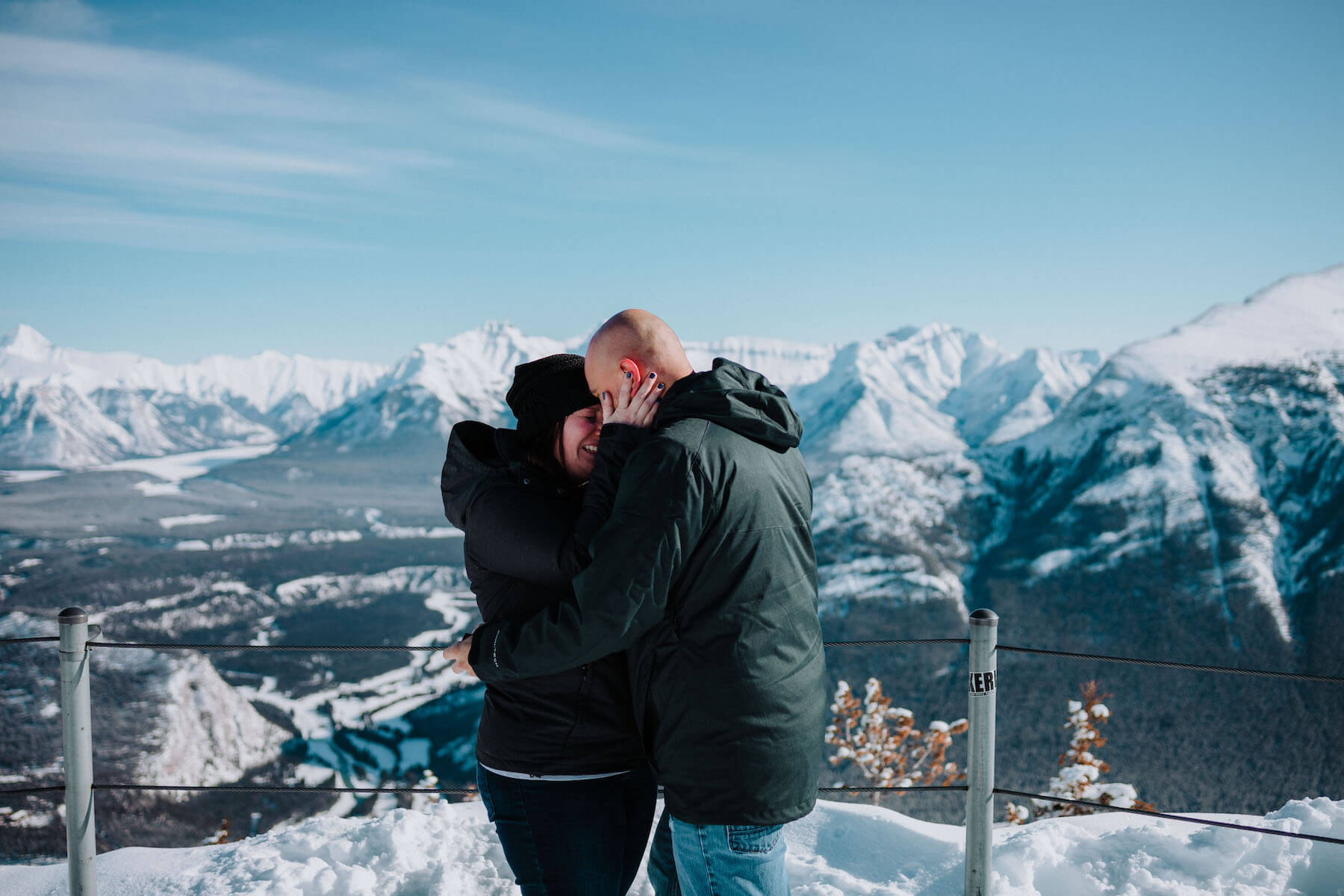 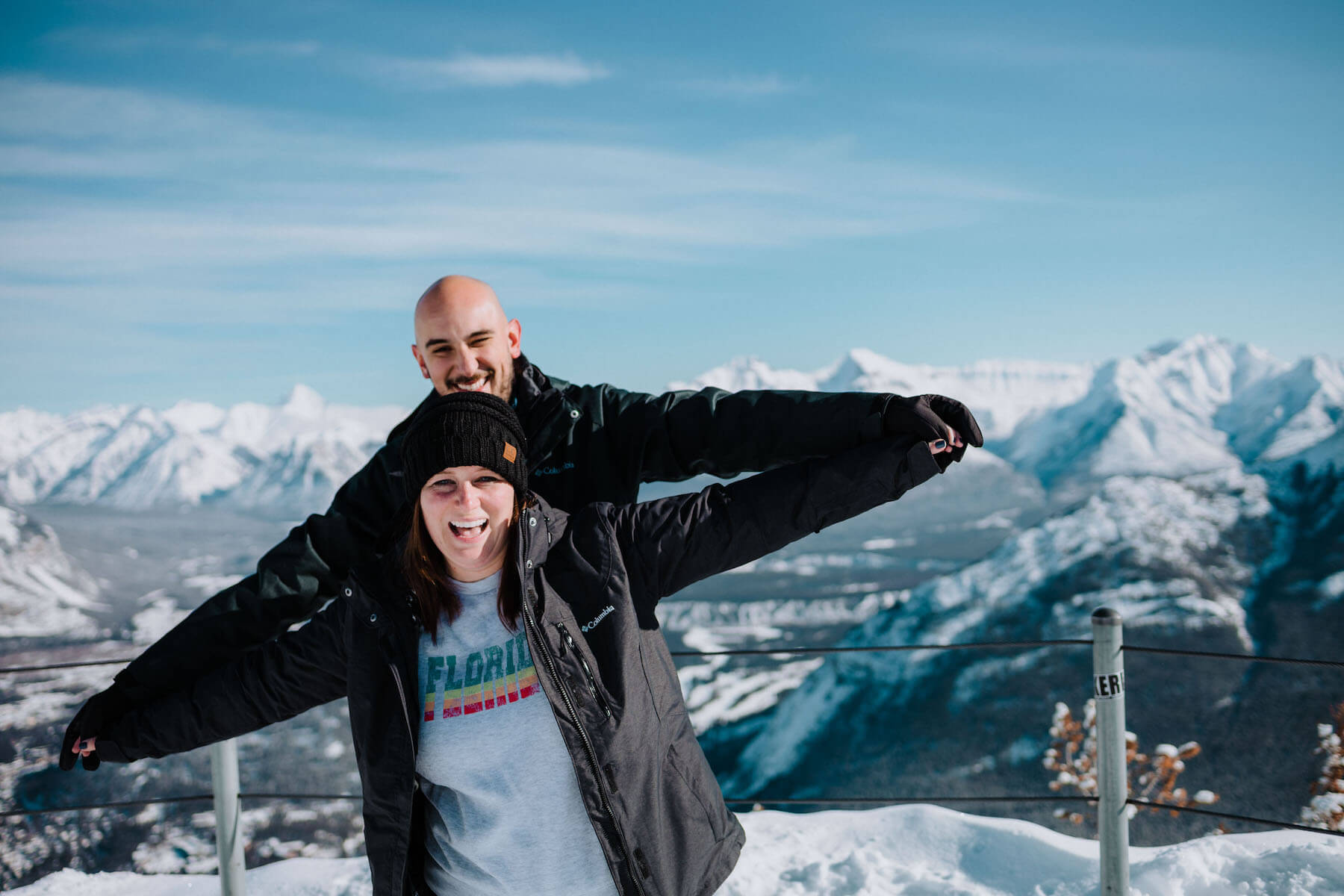 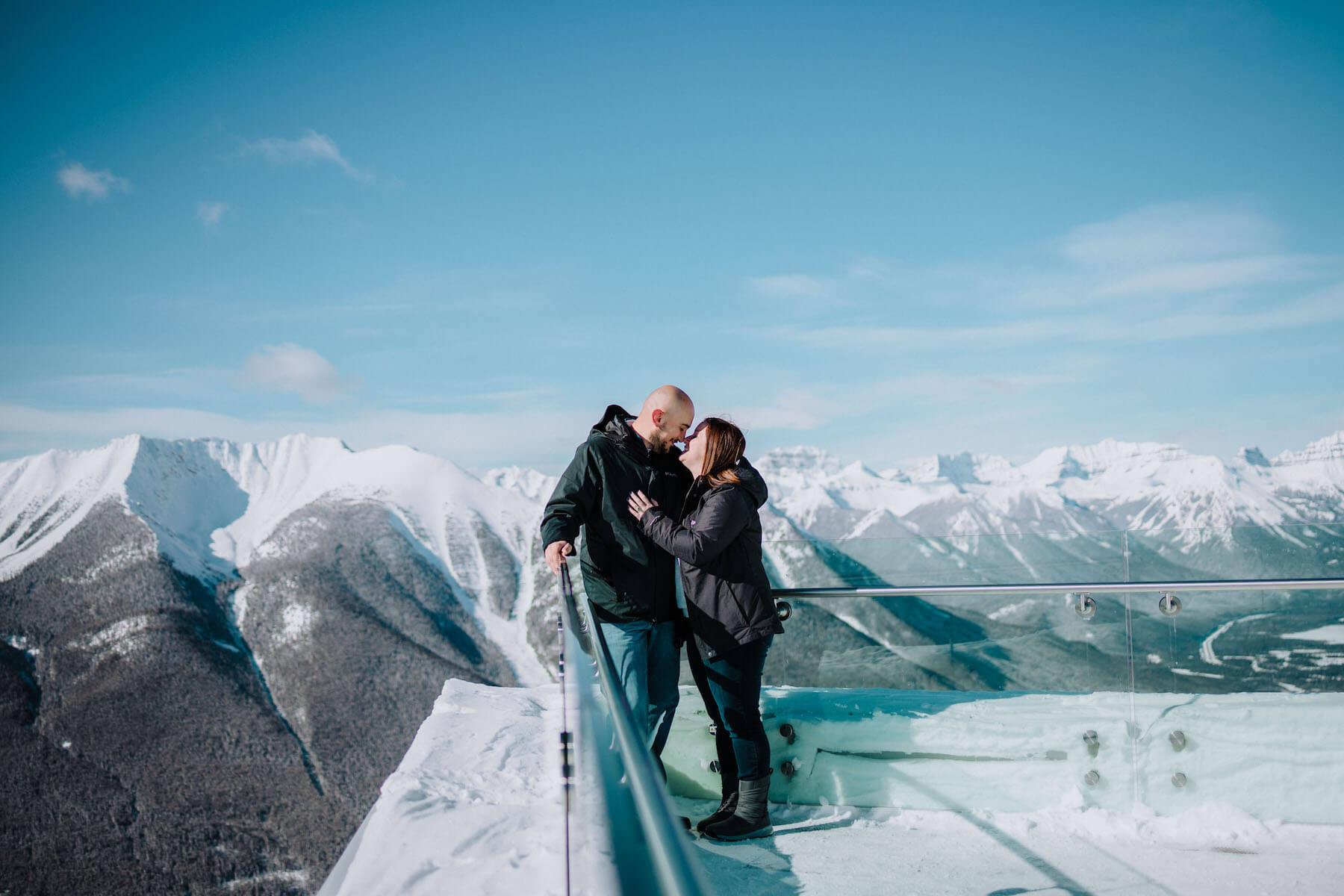 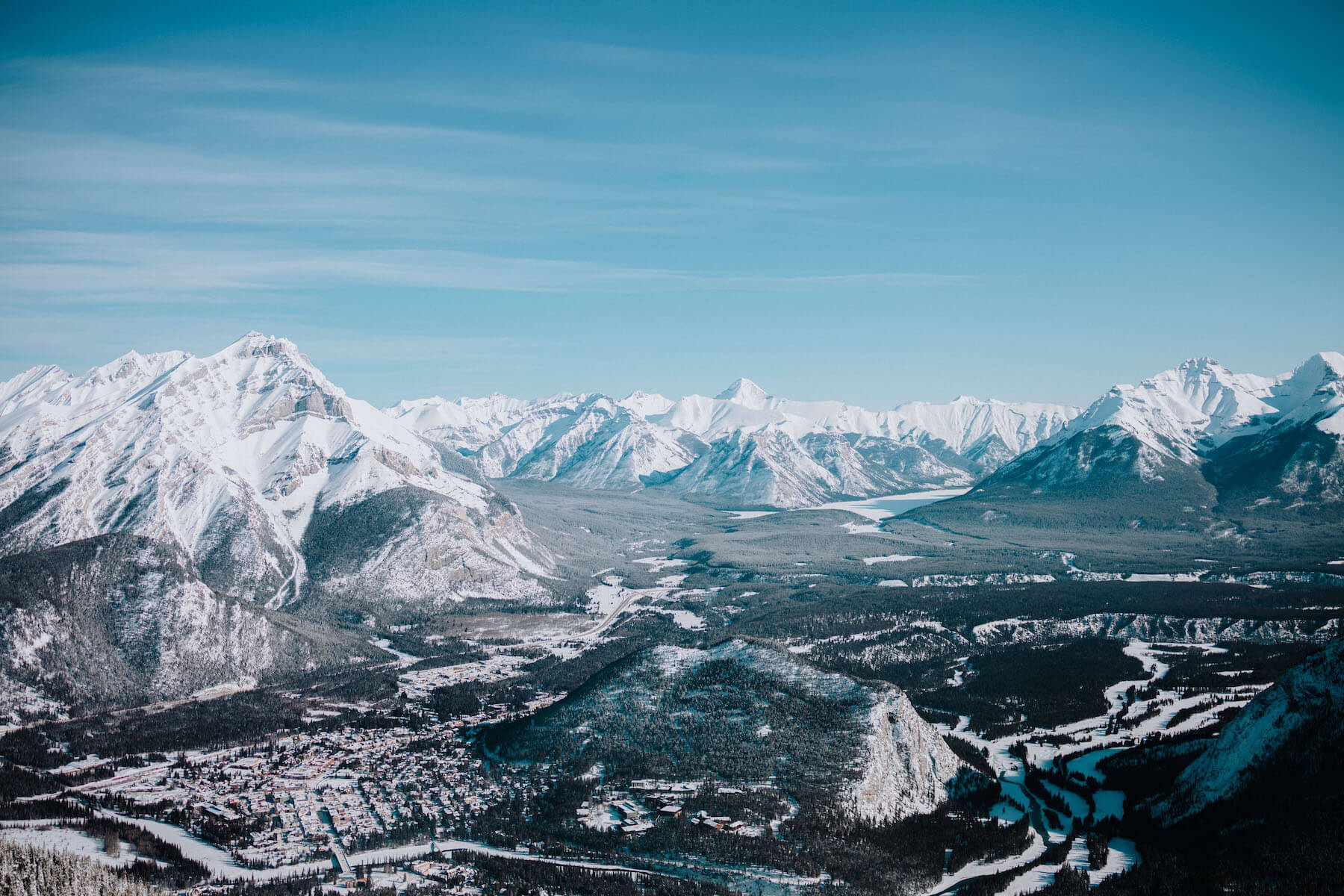 Photo: Megan in Banff for Flytographer

Love Story: “We met in high school but we lost touch after graduation. We reconnected on social media after Courtney had moved away. Once she moved back, we started to spend more time together. About four years after that, we started dating. That was over SIX years ago.”

Proposal Moment: “Courtney thought that the photographer was just another tourist taking pictures. As soon as she saw the box, she started crying and never actually answered the question. In the back of her mind she was thinking ‘we need to give this girl our email address so she can email us the pictures’ and was so surprised to find out that she was hired to be there. Megan was super sweet, patient and easy to work with. The pictures came out beautiful!! Better than I ever could have imagined!!” 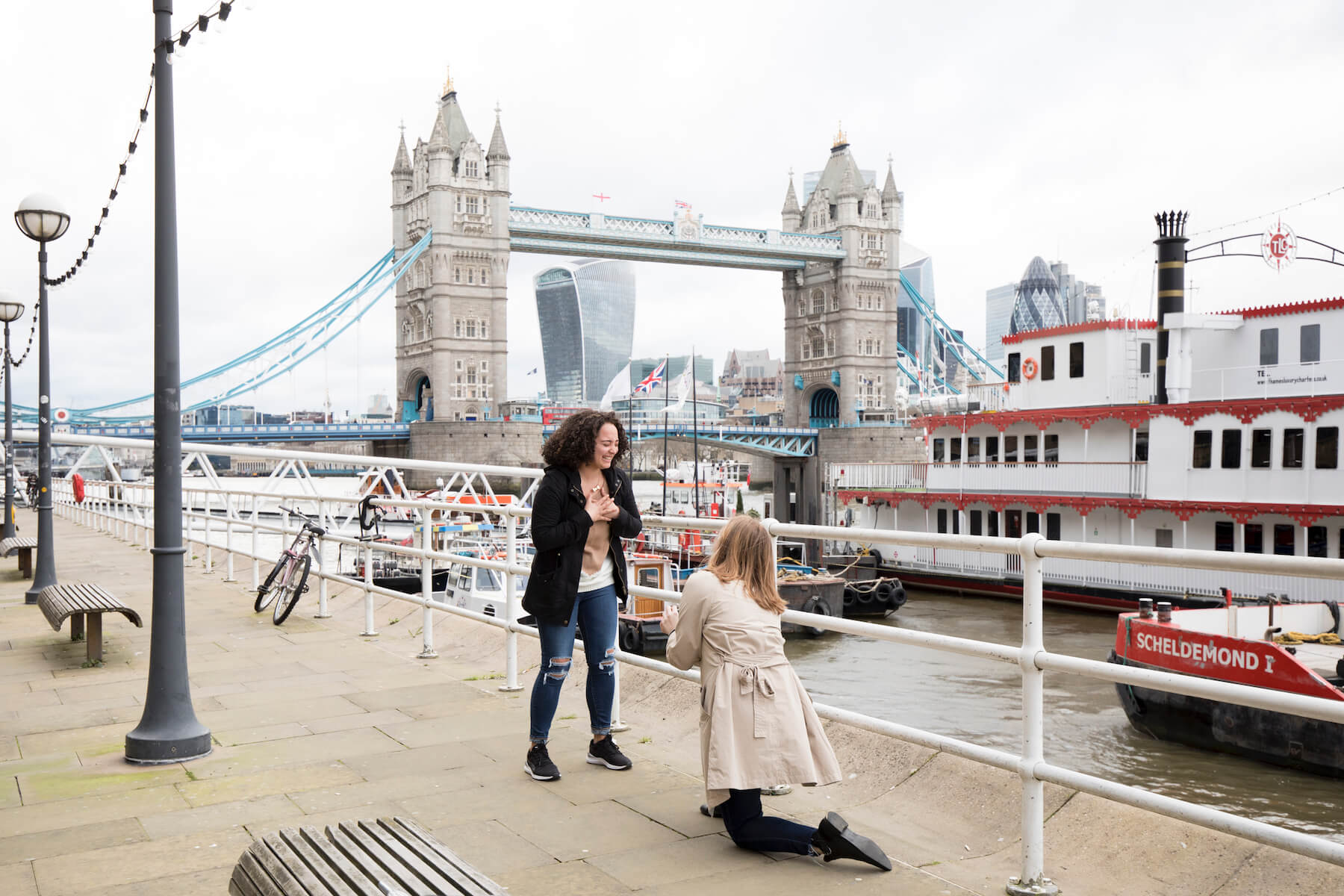 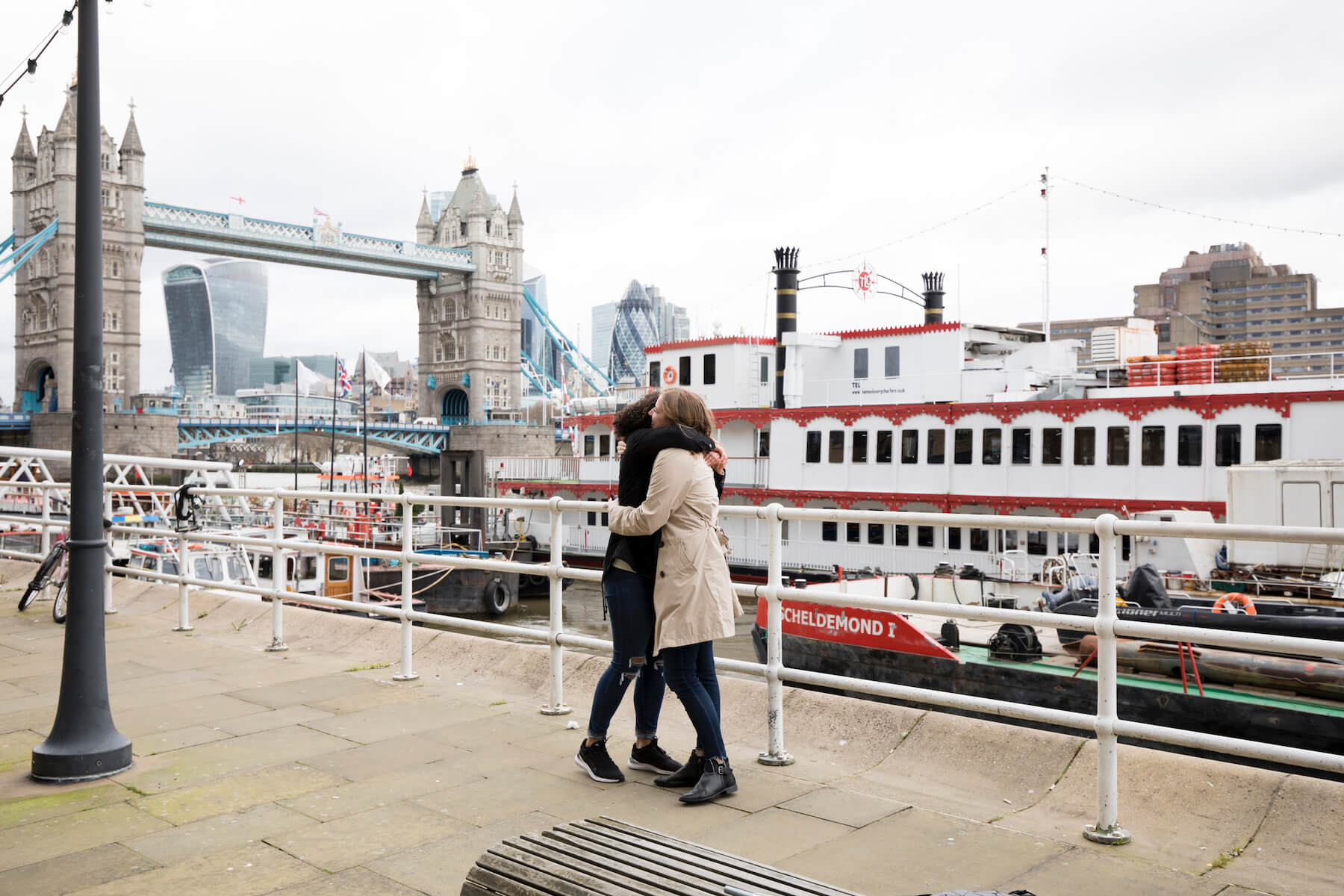 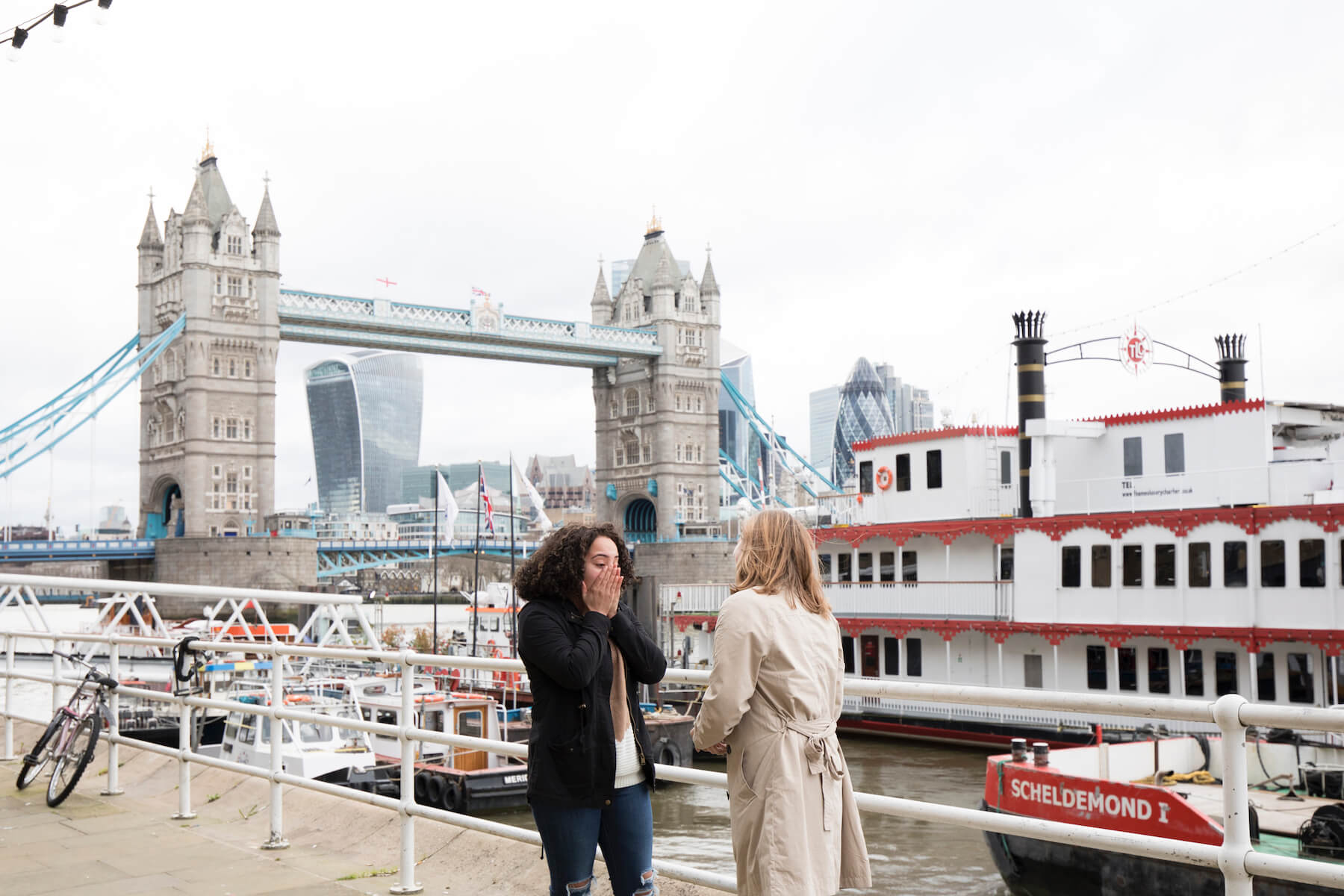 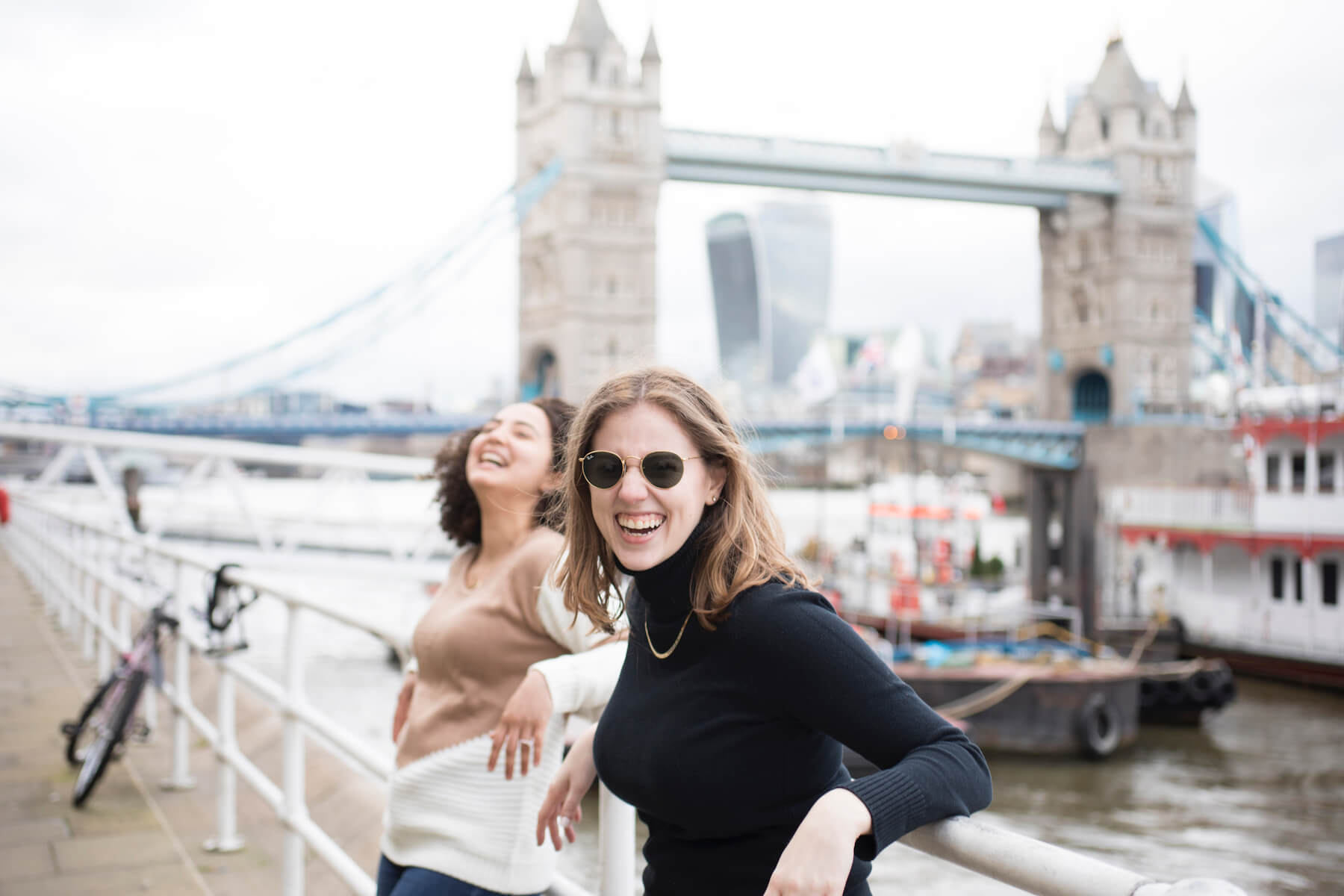 Photo: Jackie in London for Flytographer

Love Story: “We met at a banquet. We saw each other from afar. The moment we met, time stood still in one of those corny, romantic chick-flick type of ways. She became nervous, and after our brief hello, Ann Marie ran away from me, never to talk to me again for the rest of the night. We met a second time, six months later, I forced her to allow me to buy her an egg sandwich, and the rest is history.”

Proposal Moment: “Prior to the proposal, Ann Marie had demanded that she receive a speech when the big moment would happen. Instead, every morning leading up to us going to London, I wrote her good morning love notes. The beginning letter of the first word of the notes would eventually spell out “W-I-L-L-  Y-O-U-M-A-R-R-Y M-E”. As such, I showed her a picture of the notes spelling out the phrase with the ring box next to it, and I said to her that she didn’t need a speech, because I’ve been telling her how I’ve felt, all along.

She immediately was speechless, shocked, cried, but was able to muster out the word YES! We had a blast with our photographer thereafter and was able to capture our love, our laughs, and the smiles we have shared over the past 5 years together.”

Proposals are one of the purest acts of love. They signify the proposition of a life spent together. They represent a moment in a relationship when two people walk as one into their future together. We feel so lucky to have captured that moment in time for the couples above and many, many more. So join us next month to see more magical proposal moments and witness the Love Around the World.

Capture your proposal moment with Flytographer

Ultimate Guide to Professional Headshots in 2023

6 Best Road Trips in the USA by Region

Best Road Trips in the USA Is there anything better than filling up the car with cozy blankets, a full tank of gas and —...