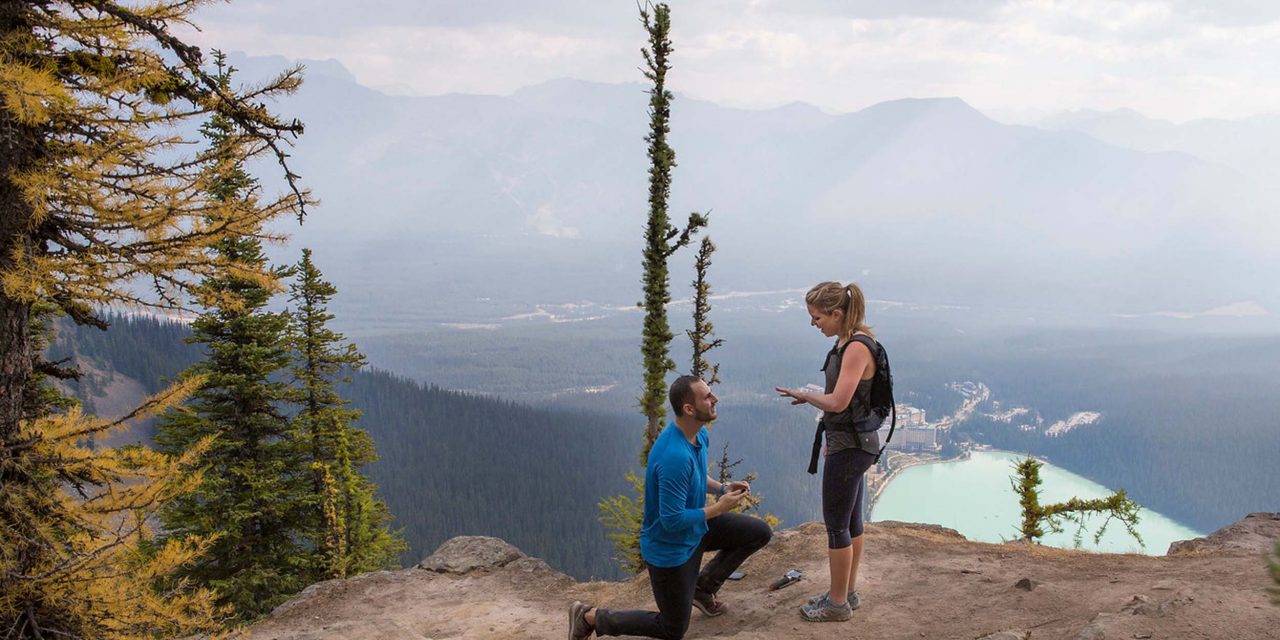 Adrienne and Josh were both interested in experiencing everything Banff and Lake Louise had to offer and had discussed visiting multiple times. Given Adrienne’s recent graduation and the end of a busy summer, it was time for a much needed vacation. But, for Josh, these reasons to plan a trip to Banff were simply a cover to plan the perfect proposal.

Adrienne and Josh met on the dating application Bumble. So, for both of them, the bumble bee has become a symbol. When initially planning their trip to Banff, Josh stumbled across a hike near Lake Louise called the Big Beehive. It was at this moment that he knew when and where he would propose. From that point forward, Josh was determined that he and Adrienne would hike from the shore of beautiful Lake Louise to the top of the Big Beehive where he could get down on one knee and ask her to be his wife.

There was one catch. Adrienne had always told Josh that if they were to get engaged, she had one requirement – there had to be a photographer to capture the moment. Enter Flytographer and Tracy. After an initial discussion concerning logistics, timing, and lighting, both Tracy and Josh realized that this would be no easy task. Nonetheless, Tracy put in several hours of planning (including a hike to the top of the Big Beehive on her own to scout the area) in order to pull off the engagement of a lifetime. Adrienne and Josh arrived in Banff and checked into the opulent Fairmont Banff Springs hotel. It was safe to say neither had ever stayed in a place as significant, or where the guests are greeted with lines like, “Welcome to the castle.” It was the perfect hotel for such a special occasion. And little did Adrienne know, the next day it would get even better.

Finally, it was time to venture to Lake Louise to summit the Big Beehive. The hike was difficult and took several hours, but Adrienne and Josh enjoyed every second. They stopped at multiple points along the way to enjoy the fantastic views (and so Josh could catch his breath) and talked about their life, the trip, and everything they had recently accomplished. As excited as they both were to be in such a beautiful place, Josh knew Adrienne had no idea what was waiting at the top of the Big Beehive.

After multiple switchbacks, several pauses to catch their breath, and over 7,000 feet of elevation, they reached the top of Big Beehive. Adrienne was elated to have accomplished the hike. Josh was, too, but he was more focused on getting Adrienne to the perfect pre-determined location on the edge of the cliff. This was not easy. Eventually, after some slight coaxing, Adrienne relented to move closer to the edge where a lady in a blue jacket was perched. Unbeknownst to Adrienne, this was Tracy. Tracy was holding the perfect picture location for Josh to propose. So, when Josh and Adrienne approached, Tracy casually disappeared into the trees behind them, leaving Josh and Adrienne with nothing but a stunning view of Lake Louise and each other.

The couple took in the view and relished in their accomplishment… and attempted to catch their breath. Just as it appeared Adrienne was breathing normally again after the hike, Josh knew it was time to take her breath away again. At that moment, Josh began to tell Adrienne how much he loved her and how amazing their relationship had developed in a year’s time. At that moment, Josh dropped to one knee, pulled out the ring he had been carefully hiding, and said, “Adrienne, I love you. If we can climb this mountain together, then I know we can do anything. Will you marry me?” Adrienne was in shock and Josh was, too. He still doesn’t remember if she actually said, “Yes.” If the photos are any indication, we’re pretty sure she did indeed say, “Yes.” Best places to take photos in Maui, Hawaii Each of the Hawaiian Islands is a unique paradise, but there’s just...