How to Plan the Perfect Parisian Proposal 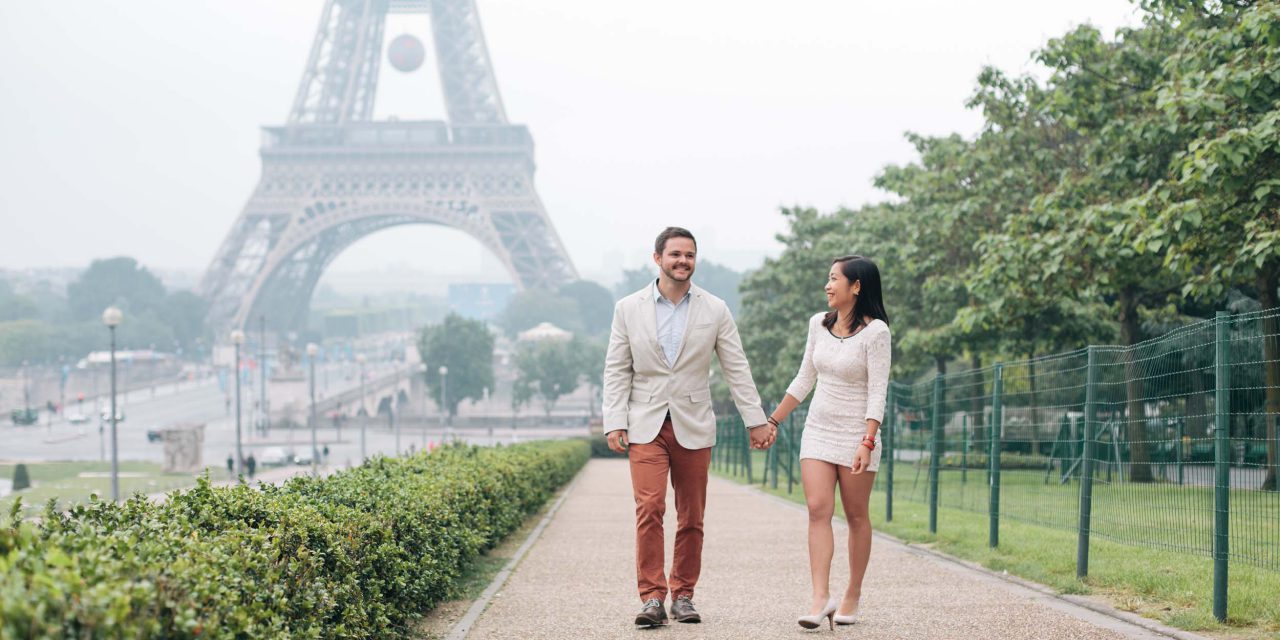 Khanh and Chris bonded over their shared love of travel and interest in the world. So, what better place to plan an amazing proposal than the city of love itself, Paris? Read on for their take on their beautiful proposal and how it came to be.

“Khanh and I have been dating for five years! I started with GE in 2010 and met Khanh at the end of 2011. She was studying at University of Cincinnati and we met up at a cross-company social event at a nightclub. We had mutual friends at P&G, where she was an intern. I remember dancing with her to all the songs we both knew! She says I was the most interesting person she talked to that night, so she found me on Facebook and invited me out to lunch. We started dating and the rest is history!” – Chris

“I had just started my second internship at Procter & Gamble when a friend and colleague suggested I go to a cross-company meet and greet, so I did, along with my three college roommates. Out of everyone I met, Chris stuck out the most: he was the ONLY one to care and was curious enough to ask about my past, where I was from, where I had been, lived and wanted to go. Most people just assumed I was born and raised in the U.S., but I shared with Chris that English is actually my second language and that I was born and raised in Vietnam and lived in Japan. So I was glad to find him on Facebook shortly after. We started talking and the rest was history.” – Khanh


“There wasn’t a single moment when I knew I wanted to be with Khanh for the rest of my life. Every time she let me know that she cared about me, every time I was able to put a smile on her face, and every time we got to enjoy a new experience together led up to that moment.” – Chris

“We’re both pretty stubborn and competitive. We have similar interests, but fairly often have very different views, so we sometimes disagree and argue, but I think it makes us both more patient and grow individually every day. I knew we were ready to take the next step when I realized we’ve worked through many challenges and no matter what happened, we’ve always come back to each other. We’ve travelled to Vietnam, lived together, shared a (tiny!) closet, lived apart (only 100 miles, but…) and here we are today. So we started talking about it, what it would be like, how many kids we would have and we started looking at rings. It was tough for me to not keep asking him about how he would propose (I’m definitely the planner between the two of us) and give him some room to do what he needed to do.” – Khanh

“We both love to travel – I studied abroad in Europe and Khanh has been moving around her entire life with her family. We also jump at any opportunity to get away and enjoy something different than our everyday surroundings. I wanted to propose to her in Paris because above and beyond it being the city of love, it was a place I visited and really enjoyed that I wanted to share with her. I’m ready to share everything that I have found and enjoyed with my soon-to-be wife!

“I knew our proposal would have to be something special – something that people would talk about and that I would be proud of for the rest of my life. When the opportunity came to plan a European vacation, I knew that I wanted to propose in Paris. When I was thinking about what I would say on the way over, there were so many things I wanted to say. For over five years, we’ve been through thick and thin and have had more amazing life experiences than a lot of married couples that I know. I knew exactly where I wanted to propose to her and I trusted Flytographer with the rest. I brought the ring and the girl and it turned out better than I could have imagined.


“I had to keep this secret for well over a month from the most detail-oriented and insightful person that I know! That in itself was stressful – then, I had to talk to her dad (I was so nervous) without her knowing, transport a ring across six time zones and try to get us to the shoot on time looking good. It was quite a handful! But once I had everything in place and we were eating breakfast within eyesight of the place I was going to propose, I actually started to feel quite confident. There were so many questions going through my head up to that moment (Would the weather hold up? How would the photos turn out? Would I remember everything I wanted to say?), but as we walked across the Place du Trocadero, I knew it was all worth it and that no matter what, I would be marrying this goofy, awesome girl holding my hand.

“Our photographer played it cool – I knew he was there, but she did not. It went perfectly – I took a selfie and didn’t like it, he offered to take a picture with my phone and then I turned to her to propose. I had everything I wanted to say in my head, but it was so much different telling her that I wanted to spend the rest of my life with her there in person. There were a couple people around, a photographer’s shutter snapping ten times a second and the Eiffel Tower in the background! I was so happy when she said yes and I was finally able to hug her and really absorb what was happening and what this moment meant to both of us.” – Chris


“I had a feeling that the proposal day would be the day, but I had no idea how, when, or any of the details. I had planned all ten days of our European adventure except one. Chris told me that he had planned it already. So I just went along with it. We had a jam packed schedule every day, so it wasn’t strange for Chris to make sure we showed up at the Trocadero at 8 am sharp after breakfast. When we were there, he wanted to take a selfie of us with the Eiffel Tower in the background. He said it didn’t look great, so he was going to get someone to take it and hand it to the closest guy near by. He asked us to move a bit so the Eiffel Tower wasn’t blocked and took a few pictures. Then Chris turned around and got down on one knee. In the background, I heard the camera shutter going a mile a second. Turned out Chris even called my dad and asked for his blessing…in Vietnamese! In the end, I learned that Gonçalo, who had Chris’ phone, was actually a professional photographer and it had all been prearranged by Chris! I was very, very surprised and impressed that he had done such a great job planning everything, from Gonçalo to talking to my dad – and managed to keep it all a surprise from me!” – Khanh

“We celebrated by touring around the city we got engaged in! There were so many amazing places to see and things to do – and so much good French food to eat! After visiting the Eiffel Tower, we had tartare and frites with ceviche and continued on to the Palais de Tokyo for a fabulous dinner with a great view of the Eiffel Tower.” – Chris

“To say I enjoy good food is probably an understatement. We hit the best restaurants and eateries throughout our European trip – from secret speakeasies to museum rooftop brunches. Knowing that, Chris had planned for a lunch at Les Antiquaries in Paris after we finished our photo session with Gonçalo. We then toured the Eiffel Tower and went all the way to the top. We ended the night with a fantastic dinner and drinks at Monsieur Bleu. This was only the beginning of our adventure.

“After that we flew to Barcelona, enjoyed the beach and the amazing Sagrada Familia; then we moved to Rome and tried to imagine what life was like thousands of years ago. Our trip continued to Munich with some fantastic radler beers, Karlsruhe to see where Chris used to live, and Strasbourg where some of my distant relatives are. We ended the trip in Brussels (via Luxembourg for a quick hike!) where I stayed a few days extra for work. When asked what was my favourite city of the trip, it was hard to not say Paris, where the amazing proposal was. This trip and the city of love will forever be special to both of us.” – Khanh