How to Plan the Perfect London Proposal 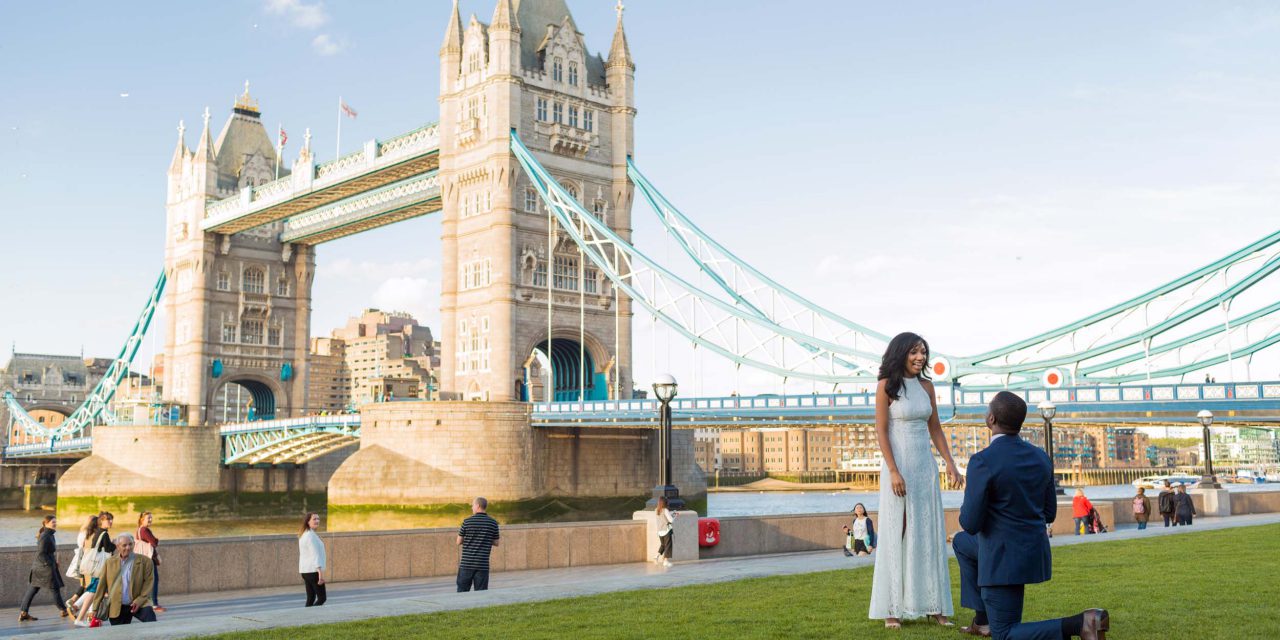 With just a few little white lies, Von planned an amazingly romantic proposal in front of Lindsay’s favourite spot, London’s Tower Bridge. Here’s how it all went down.

“Lindsay and I met on April of 2014 through our mutual friend Quincy. Lindsay had just moved to Chicago the week before and Quincy was in Chicago for work. He called me that Friday and we planned to meet up that night. At the last minute, he told me that he was bringing a friend with him. My aunt and uncle were in town and I had plans to meet them for dinner, so I asked Quincy if they wanted to join us. So the first night I met Lindsay, she also met some of my family! As soon as I saw Lindsay, I immediately said to myself ‘Who is she? She’s gorgeous!’ and wanted to know more about her. We all had a great time at dinner. Afterwards, Lindsay, Quincy, and I continued the night by going out in downtown Chicago. We all had a great time that night and I asked Lindsay for her phone number before we all went home. And that is how ‘Vondsay’ was created!”

“For my 24th birthday last year, Lindsay surprised me with a trip home to Kansas City so that we could spend my birthday with my family. Lindsay knows how close I am to my family, so this was the perfect gift. That weekend, I saw how perfectly Lindsay fit in with my family and after that weekend, I knew I wanted Lindsay to be my wife. My friend Trent and I were in London for the Kansas City Chiefs vs. Detroit Lions football game. During the game, I told Trent that I wanted to propose in London and wanted to capture the moment in front of her favourite landmark in the world, Tower Bridge.


“Fast forward to February 2016 when I began asking close friends for advice on purchasing an engagement ring. After searching for three months, I finally found the perfect ring for Lindsay.

To celebrate our second year of dating, I suggested that we take a vacation in July to her favourite city in the world, London. Initially, there was some hesitation – why London over somewhere warm with a beach? – but I was able to convince her it’d be a great summer vacation. Before we left, I told Lindsay that we had to go shopping to get her a nice dress because we would be attending a formal event in London. This was all a lie – it was the only way I could convince Lindsay to dress up for the proposal without giving the surprise away.


“What Lindsay didn’t know was that I had been secretly planning this trip since February. With the assistance of Flytographer and our photographer Rajesh, we created the perfect plan. A month before the proposal, I had an hour long video conference with our shoot concierge and Rajesh. During this meeting, we finalized all the details and came up with the perfect route for the photoshoot and the ideal place for me to pop the question.


“We arrived in London on a very cloudy Thursday morning.  That evening during dinner, Lindsay mentioned, ‘We need to take pictures before the party tomorrow since we will be all dressed up.’ I then informed her that I already thought of that and hired a professional photographer to take pictures beforehand.

“The next day, I was very excited to finally ask Lindsay to be my wife. Unfortunately, rain was in the forecast for that evening and would ruin everything. At 6:45, there was not a cloud in the sky and the sun shined brightly. Our photographer Rajesh met us in our hotel lobby to start our hour long photoshoot. Lindsay was enjoying the entire experience and we were feeling like celebrities while we were getting our pictures taken. Once we made our way towards Tower Bridge, I knew it was almost time for me to pop the question. Once Rajesh gave me the signal, I turned to Lindsay and began telling her how much I loved her. I then dropped to one knee, everyone around us stopped and all eyes were on us at that moment. When Lindsay said yes, everyone cheered. It was the perfect backdrop for the happiest moment of my life.” – Von