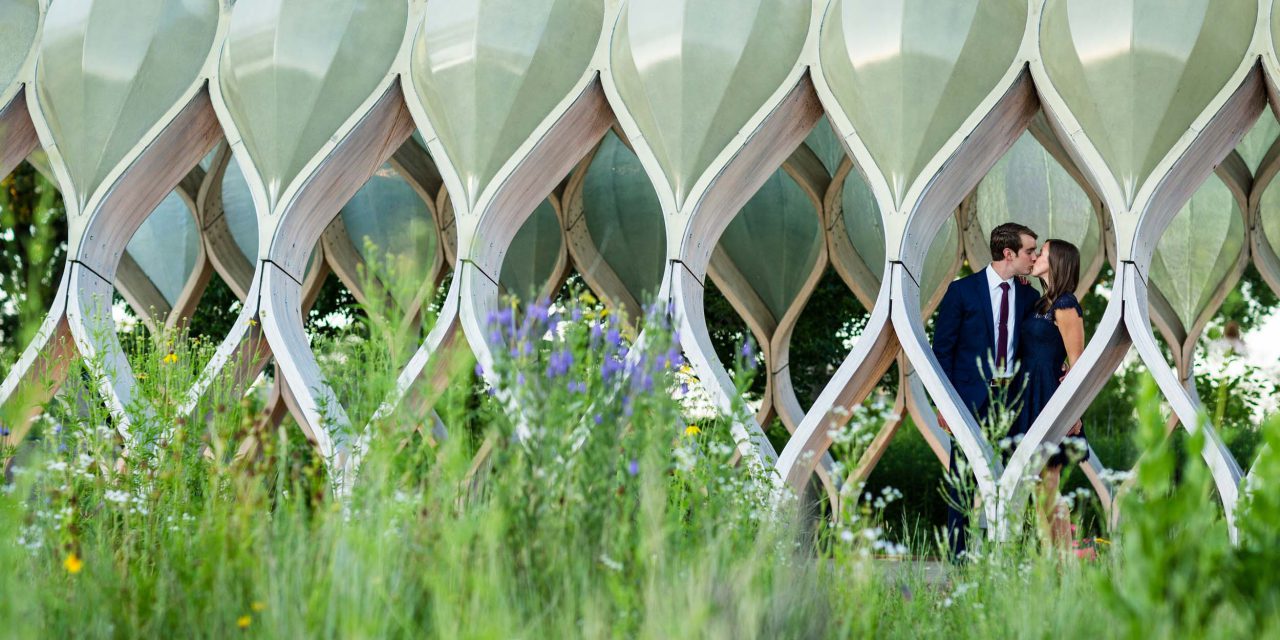 Through thoughtful planning, this gorgeous Chicago proposal went off without a hitch. Marshall planned the perfect proposal in the city where he and Colette fell in love. Read on for all the romantic details. “Marshall and I had met previously through a mutual friend, however, the winter of 2013 is when our love story began. We both lived in Chicago at the time and he invited me to go snowboarding with a group of friends, but I was unavailable that weekend. In response, I suggested he join a trip to Lake Geneva with my friends which happened to be a couple weekends later. The more the merrier, right? Needless to say, we had a great time! Our love story began to unfold from there as Marshall asked me out on many dinner dates and events along with an unforgettable snowboarding trip to Whistler, BC with friends. As time went on, his calls and texts grew fonder and all the more sweet. It wasn’t until July of 2014 that Marshall would take me to lunch and give me a greeting card with words written inside saying that July 14th would be a date for us to remember. He was right and since then we have been together and built a love to last full of non-stop adventure.” – Colette HOW DID YOU KNOW HE WAS ‘THE ONE’?

“I didn’t know he was the one right away. It didn’t hit me with a ‘love at first sight’ feeling like you hear in fairy tales. I had a strong feeling deep down that he was special, but over time I learned just how special. The more I learned about him, the more I loved! I had found that feel good, get lost in his eyes, heart skip a beat, fall so hard, never look back, keep me guessing, high on life, crazy can’t get enough of love. I’ve never found someone who lights up a room as much as Marshall does. There is so much truth to the saying, ‘When you know, you just know.’ The day I realized there wasn’t a thing about him that I didn’t adore was the day I knew we were meant to be soulmates.” – Colette HOW DID YOU SELECT YOUR PROPOSAL LOCATION AND DATE?

“When Marshall and I discussed the topic of being engaged, we agreed that this was definitely the next step for our relationship. The only factor left to decide was time. ‘It could be now or a year from now, but I’ll do it when the time feels right,’ he said. That being said, we met in Chicago so naturally it was fitting that we got engaged there, too. The date just happened to fall on when the time felt right.” – Colette “It was the weekend and an absolutely perfect July summer day with abundant sunshine. Marshall had planned a date night and suggested I wear something fancy. He was going to be leaving for grad school at the end of the month so this was a great opportunity for us to do everything in Chicago he hadn’t have a chance to do yet. Great! So, 6:00 pm rolls around and he picks me up looking dapper as ever. We proceed to a place called Café Brauer that is nestled by the South Pond in Lincoln Park. It’s close to home and the perfect spot to grab a drink before proceeding to our next reservation. Little did I know, that next reservation was about to change my life. We decided to stop and take a picture on the bridge overlooking a great view of the city. That was when Marshall asked a young gentleman if he would mind taking our picture. After two pictures, I pulled away from the pose when Marshall said, ‘Wait, can you take just one more?’ I turned to him puzzled, but ready to take a picture when he grabbed both of my hands. This was it. It was happening. So many thoughts and emotions were going through my mind and I was overcome with happiness! He gushed about our love and poured his heart out to me, got on one knee and said the most romantic phrase known in history, ‘Will you marry me?’ YES! Heck yes! Absolutely yes! Wow. Mind blown. I was so surprised and did not see it coming especially right then and there! In all of the excitement, I realized the gentleman was still taking pictures. I opened my purse to tip the man because I thought, wow, he probably didn’t see THAT coming, when Marshall told me to close my purse. ‘Babe, I hired him!’ The thought never even crossed my mind! A photographer? Wait, the entire proposal was caught on camera?! What a genius idea. That was when I met Adam, our Flytographer expert, and learned he would be taking engagement pictures of us for the next hour! As you can imagine, this came as a shock to me. We proceeded to roam around Lincoln Park as Adam captured the moment. From there, we walked across the street to a rooftop bar called the J. Parker. To my surprise, our siblings and close friends were all there to celebrate with us! Needless to say, it was the happiest day of my life thus far.” – Colette “About a week later, we received our photos back from Adam. I saw the details in my email inbox and immediately opened it eager as ever. It brought tears to my eyes looking at the pictures as I was reliving the happiest moment of my life. Adam captured the moment beautifully and his talents as a photographer are apparent in the pictures. Since the engagement, Marshall moved to Los Angeles for grad school and I visit him every chance I get. We are eagerly planning our wedding for after graduation. We’ve gone on many West Coast adventures already – surfing in Venice, camping and hiking at Joshua Tree, shopping in Santa Monica and exploring Los Angeles. Again, we are so thankful for Flytographer and Adam for capturing this milestone for us.” – Colette