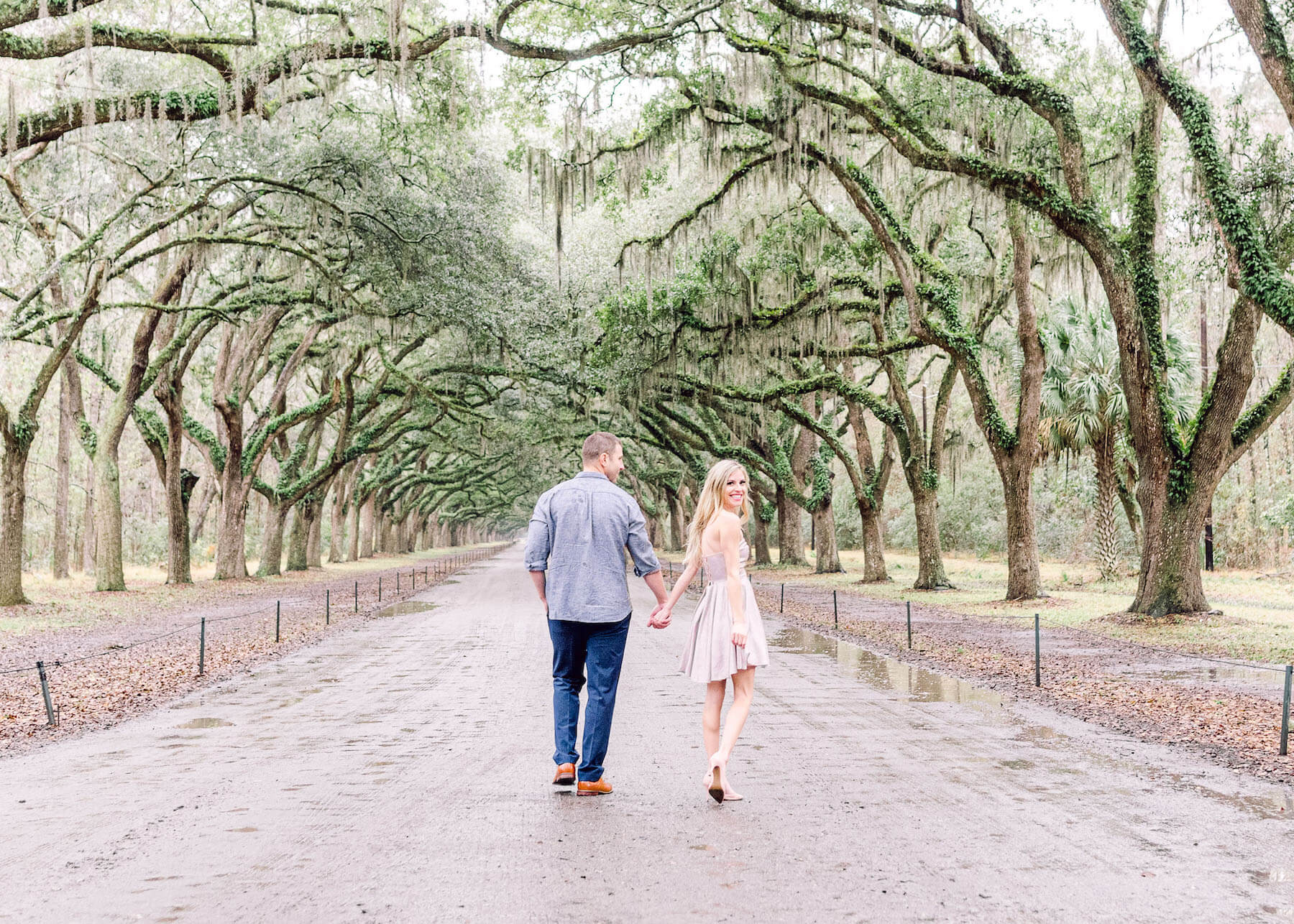 Savannah, Georgia is a coastal town filled with live oak trees, Spanish moss, charming cobblestone, and of course, plenty of southern hospitality. (Fun fact: Savannah is known as one of the world’s friendliest cities!❣️) Savannah’s architecture is the epitome of photogenic, making a photoshoot here an absolute no-brainer. Read on to learn about our top 10 places to take photos while you’re in Savannah! 📸 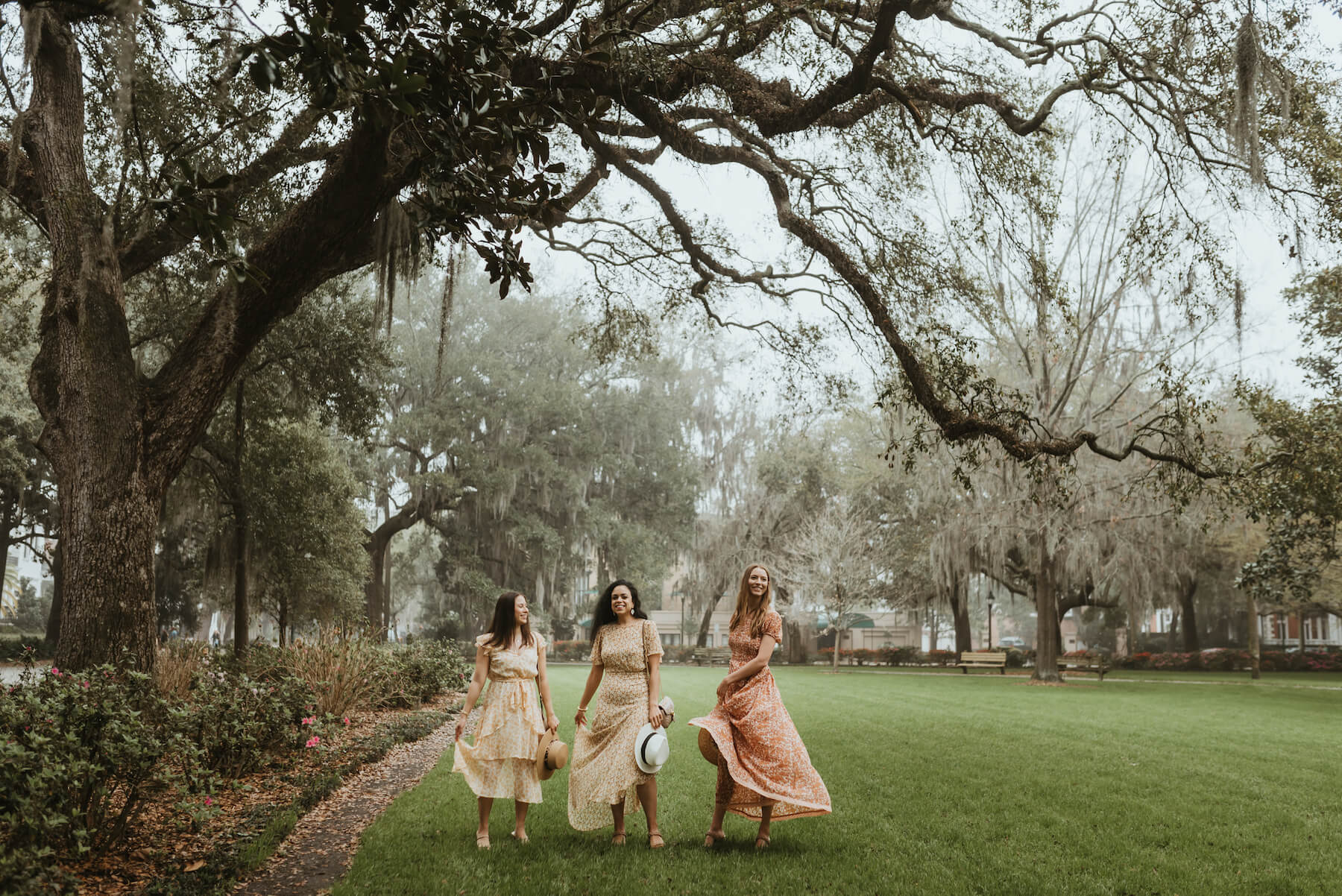 Photo: Kathleen in Savannah for Flytographer. Kristi and friends capture a trip together in Savannah at Forsyth Park with a vacation photoshoot.

Hot tip! On Saturday mornings be sure to stop by the Forsyth Farmers’ Market located under the old oak trees at the southern end of Forsyth Park. The Forsyth Farmers’ Market is open year-round and focuses on supporting local growers (all within a 200-mile radius of Savannah), producers, and consumers with a goal to make healthy foods accessible and affordable for all. 🍅

For the perfect spot for photos in Savannah, Forsyth Park Fountain is at the top of our list. Here are some of our favourite Savannah photoshoots in Forsyth Park, which is also our most popular route in Savannah. 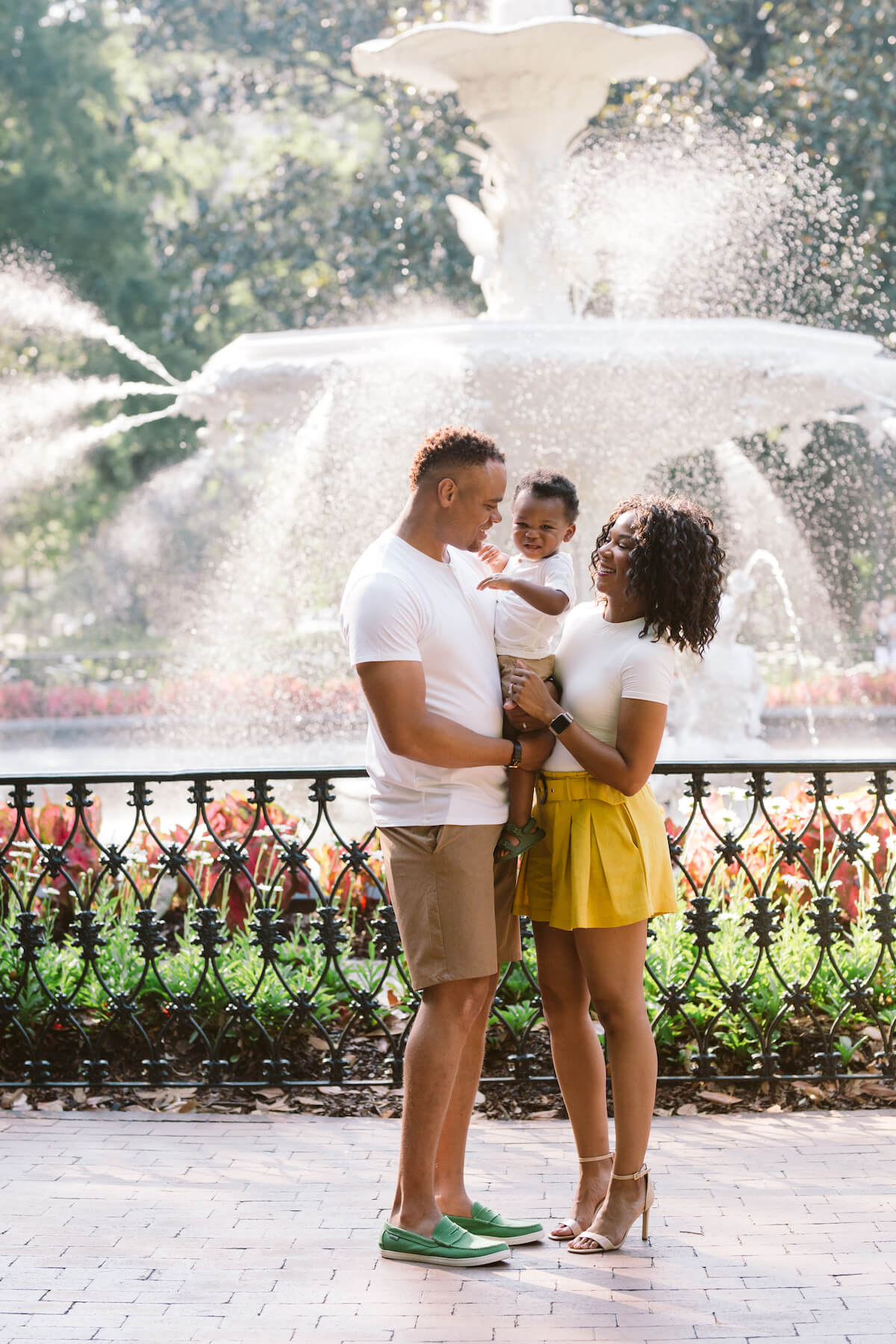 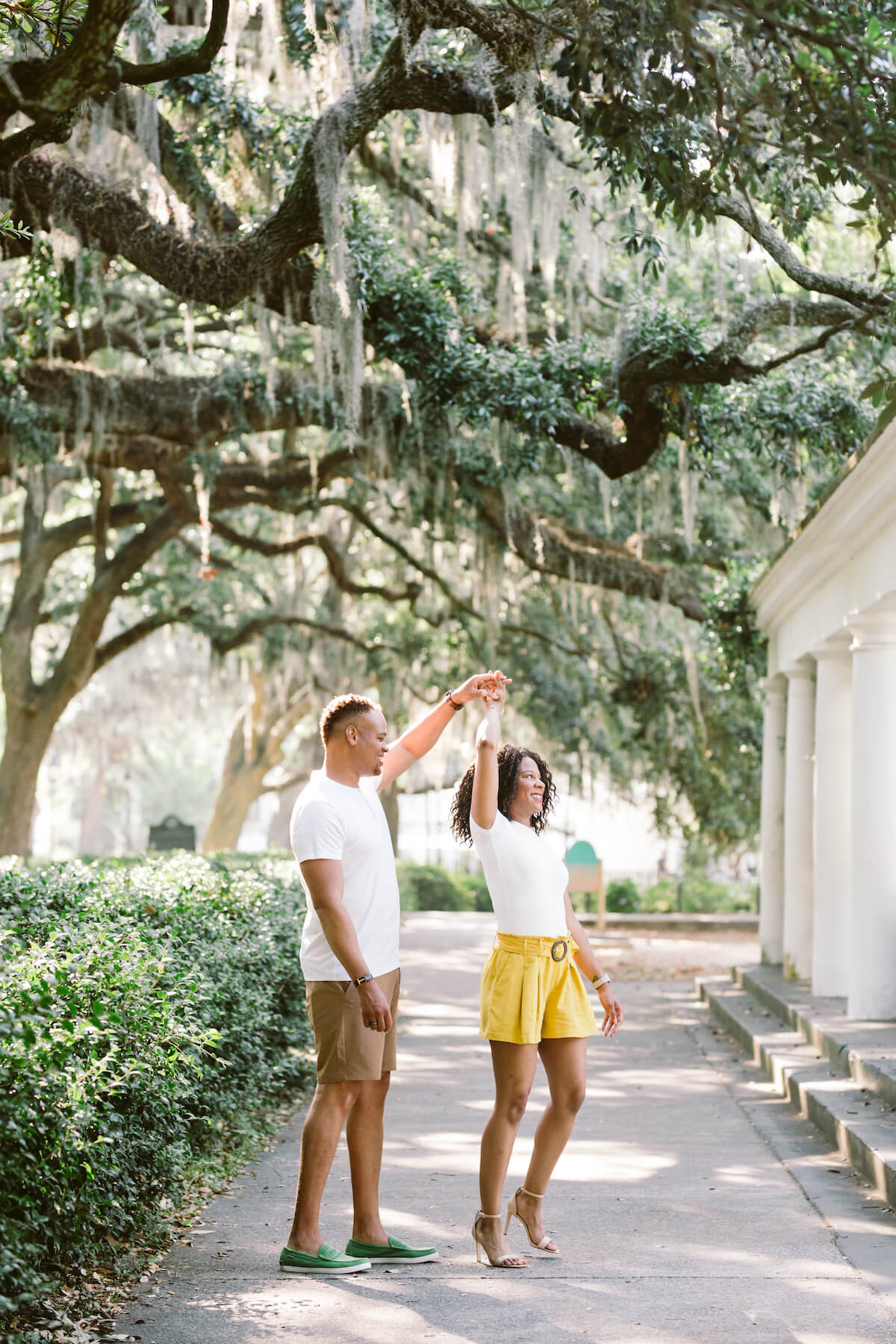 Photo: Shannon in Savannah for Flytographer. Danice and family capture a fun day in Savannah at Forsyth Park with a vacation photoshoot.

Yes, indeed, you read that right: a hospital building  is on our list of top places to take photos. Located on Whitaker Street (which runs along the west side of Forsyth Park), Forsyth Park Animal Hospital is on the garden level of the Metts-McNeil House, a spectacularly lovely Victorian mansion with elegant pillars and a rounded facade. The nearby buildings, historic homes, and speckled, shady streets make it one of the prettiest streets and loveliest places to take photos in Savannah. 🤳 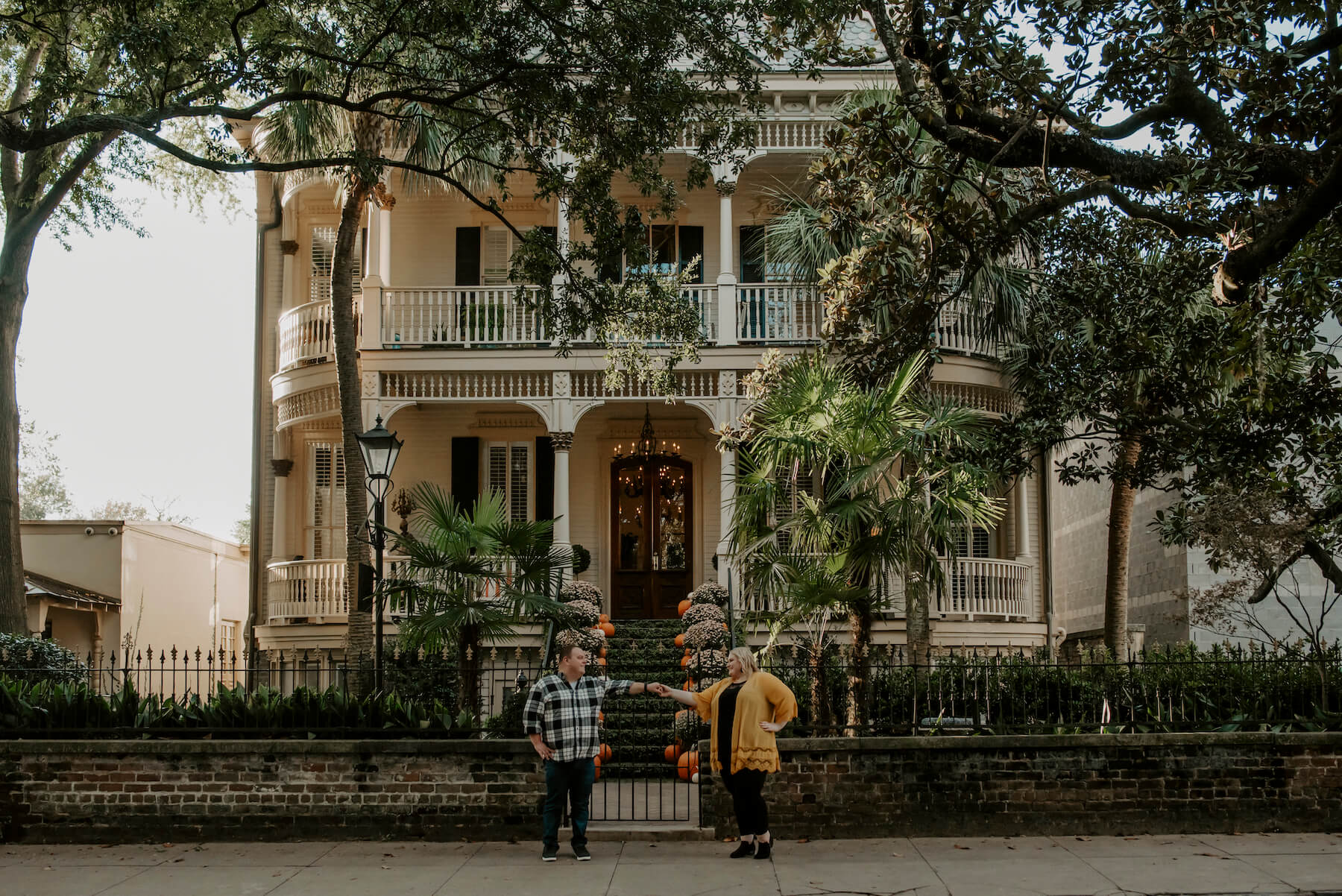 Photo: Flytographer in Savannah. Lindsey and partner celebrate their anniversary in Savannah at Forsyth Park with a couple photoshoot.

Just 20 minutes from Savannah lies Tybee Island, a small island with some of the best beaches in the United States. 🐚 Tybee Island is perfect for families and photos, with its wide, sandy shores and perfectly-photogenic sunsets. Tybee Island is located at the easternmost point in Georgia, near the Savannah River, which sits as the border with neighbouring South Carolina.

The Tybee Lighthouse is another great place to take photos in Savannah, as well as a popular tourist pitstop here in Tybee Island, and is one of just a handful of 18th-century lighthouses that is still in operation in the United States! If you’re wanting to add some quality beach and sun time while you’re in Savannah, be sure to include Tybee Island on your itinerary. ✔️ 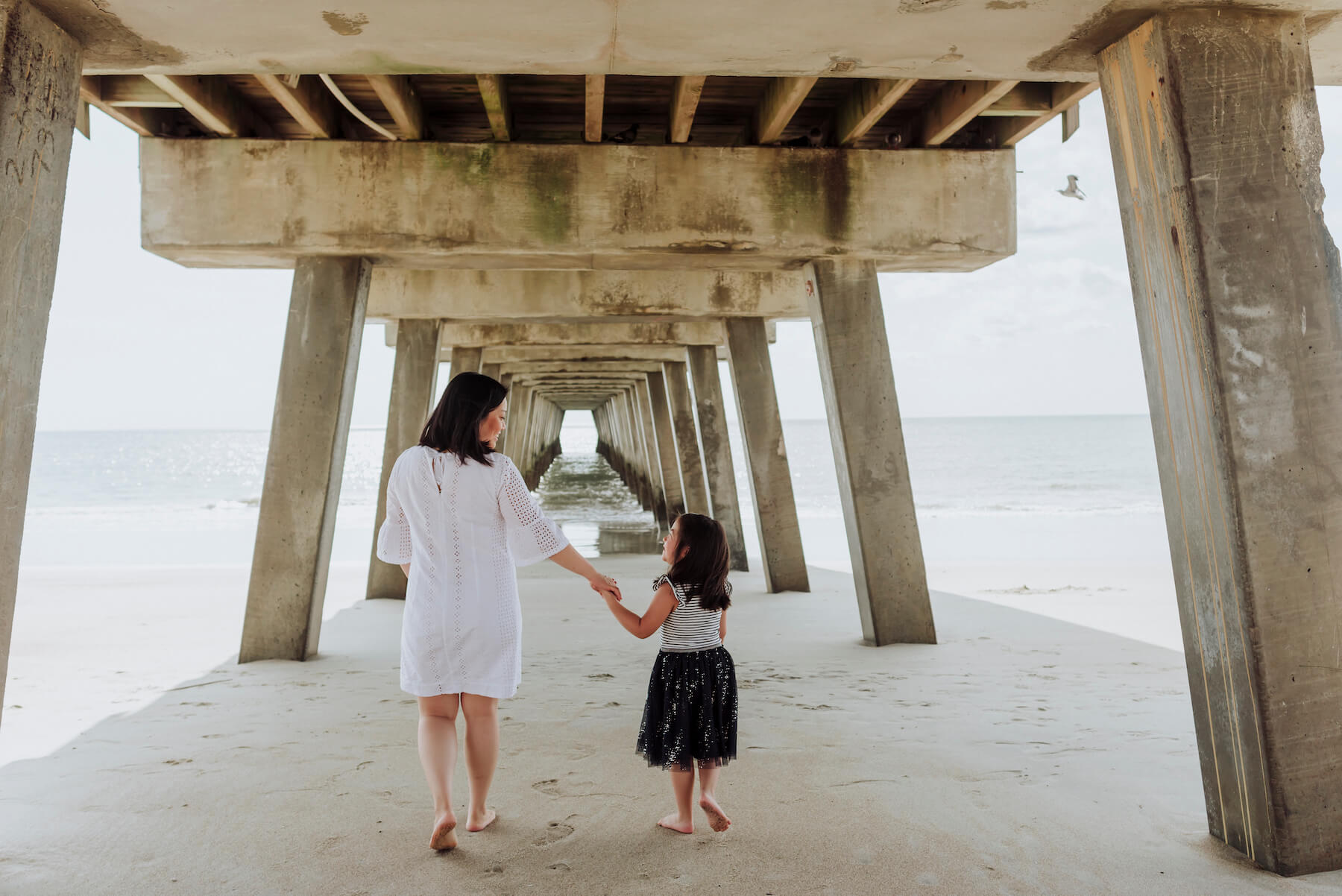 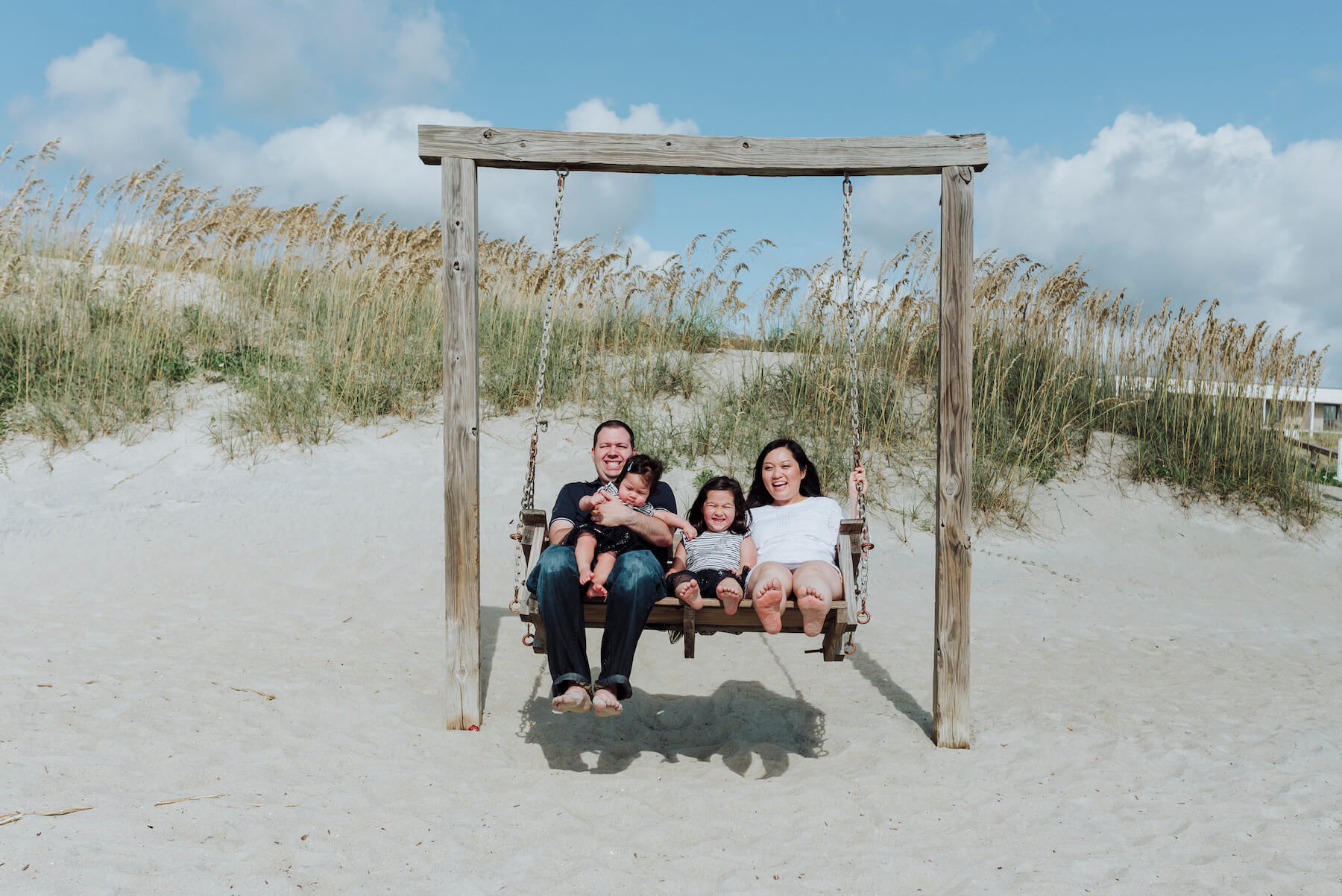 Photo: Flytographer in Savannah. Ruth and family share a day of fun in Savannah at Tybee Island with a family photoshoot.

Fun Savannah fact: the city was originally laid out in a grid pattern, with open areas known as “Squares” being part of that city plan. ◽️ Squares were set up as sort of “living room” for each of the 24 outlined neighborhoods in Savannah, in the hope that they would always remain a special and essential public space to be protected and enjoyed. Today, 22 of the original 24 Squares still exist, and Orleans Square is one of our favourites for places to take photos in Savannah!

Orleans Square is on the west side of the Historic District of Savannah, and shows off a lovely fountain, as well as more of Savannah’s beautiful oak trees and historic homes. Orleans Square is quiet and calm, making it a great spot for photos here in Savannah. 😌

Are all these Southern sights reminding you of Forrest Gump? 🏃‍♂️Makes sense! Many of the scenes from the movie were filmed right here in Savannah, and just a few blocks from Orleans Square is the Savannah History Museum where you can see Forrest Gump’s famous bench. 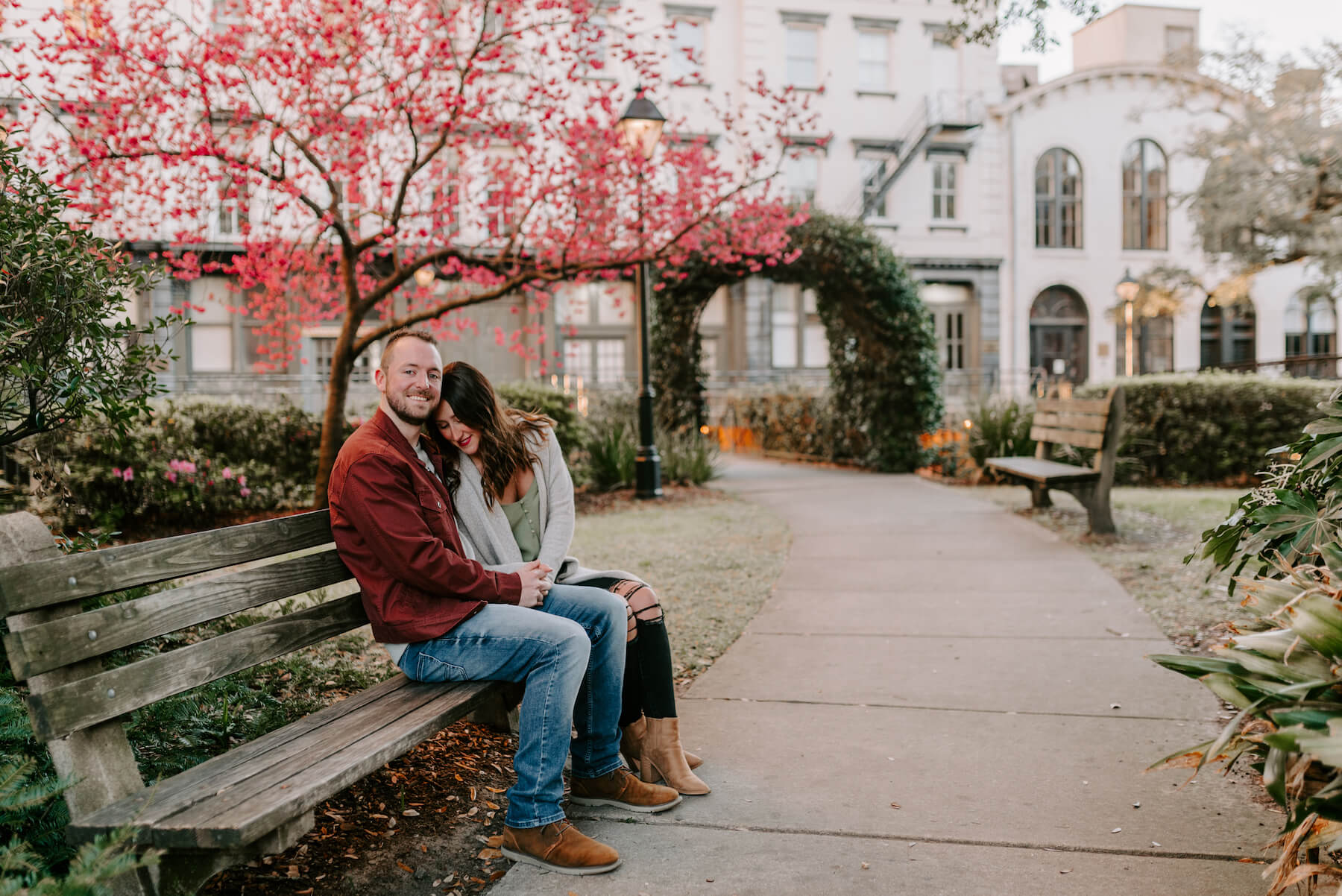 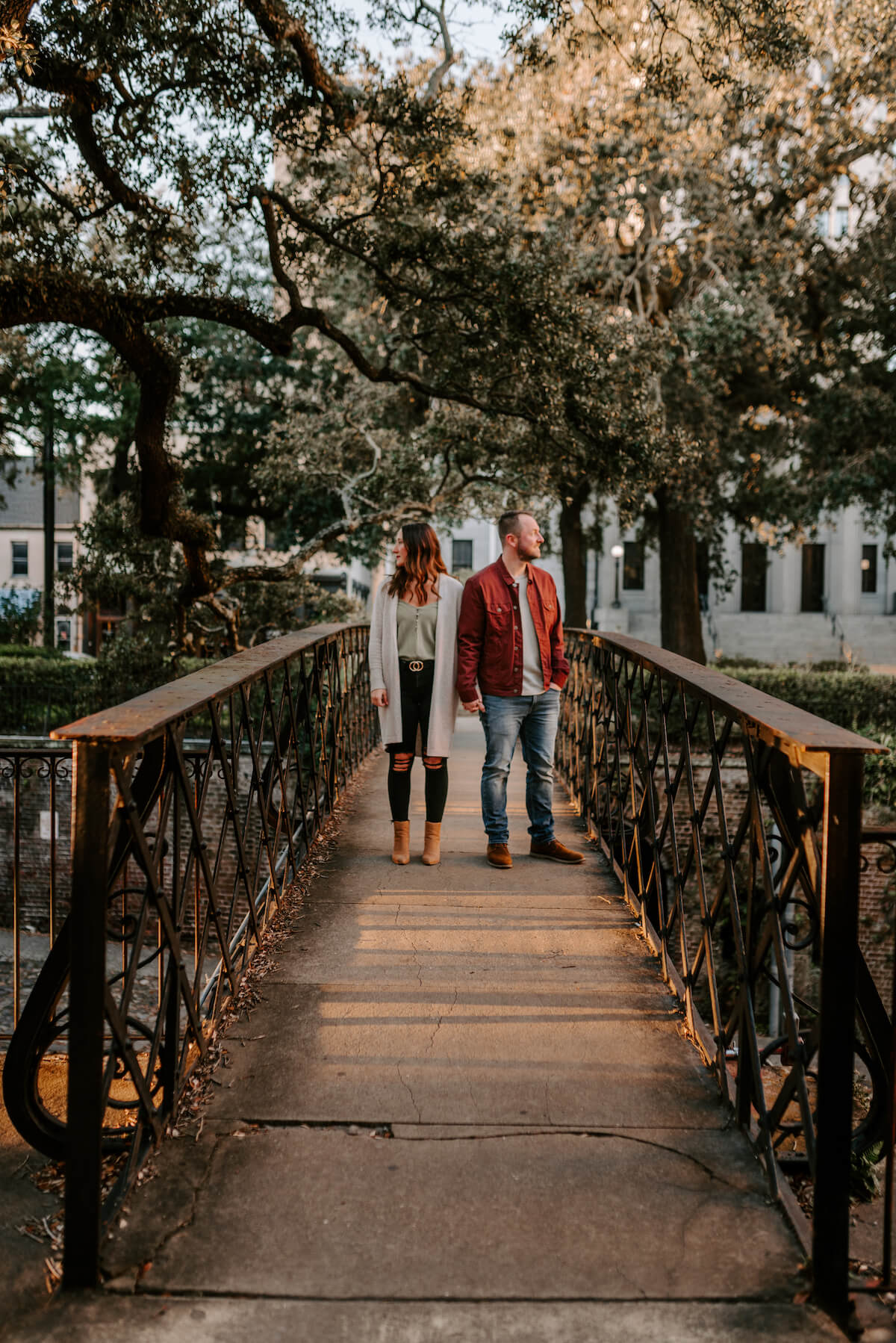 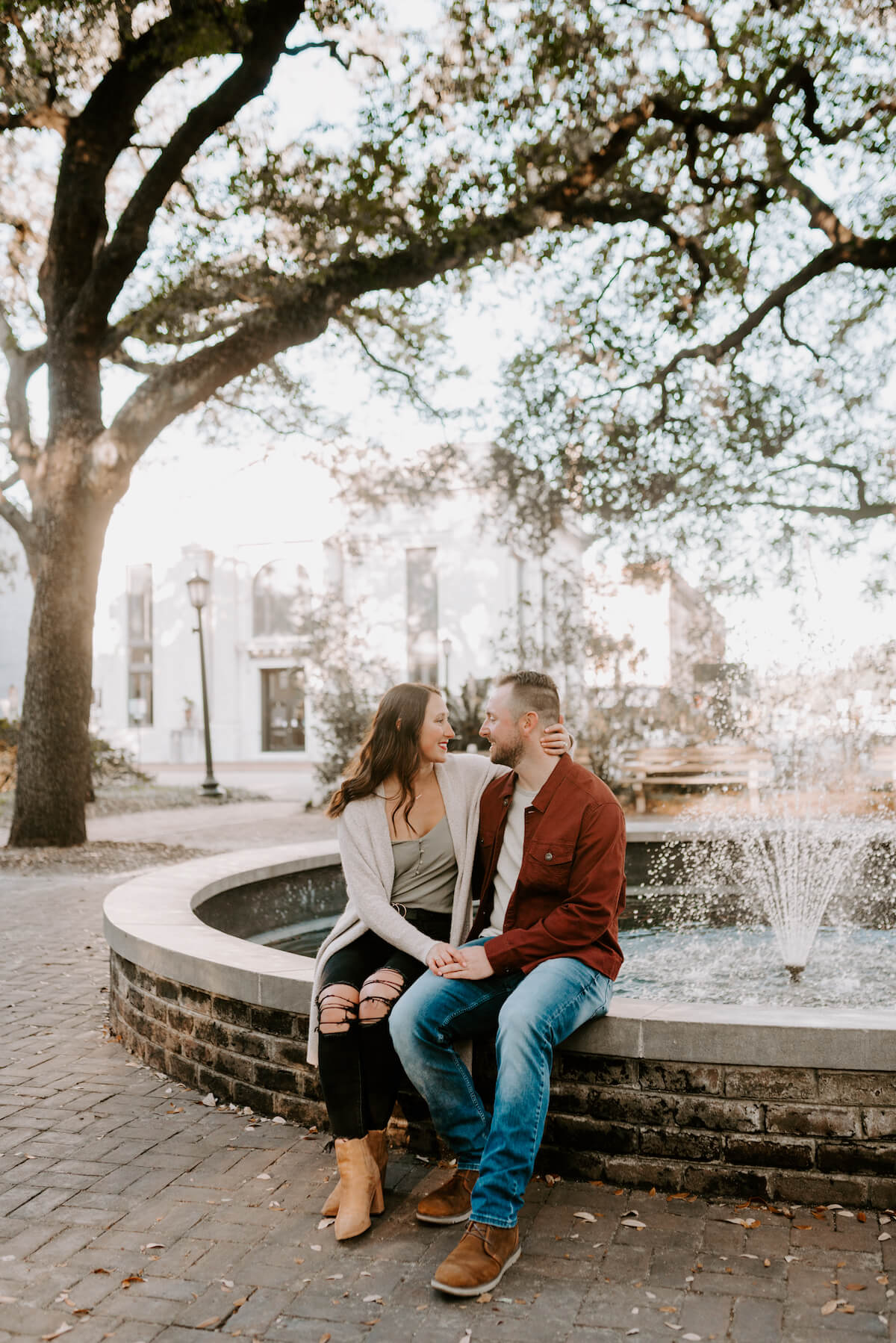 Photo: Kathleen in Savannah for Flytographer. Amanda and partner capture a trip together in Savannah in Orleans Square with a couple photoshoot.

River Street in historic downtown borders the Savannah River, and is home to a full days’ worth of the city’s best shopping, dining, galleries, and more! 🛍 Sightseeing is plentiful, whether you’re gazing at the water as the ships pass, or grabbing a drink at one of the many pubs. 🍻 Originally cotton warehouses, today the buildings and shops maintain historic details while providing modern-day entertainment.

As the sun sets over the water, the music swells in the streets, and the smell of Southern candy classics float through the warm air (yes — fresh candy!), River Street reminds you why Savannah is so special. 🎶

Have a free evening? Want to dive even deeper into that waterfront nightlife along River Street? Try a Savannah Riverboat Cruise! ⚓️ Riverboat cruises are a perfect way to enjoy Savannah’s architecture, river views, and classic Southern food and drinks. (Not to mention they make for really beautiful pics!) 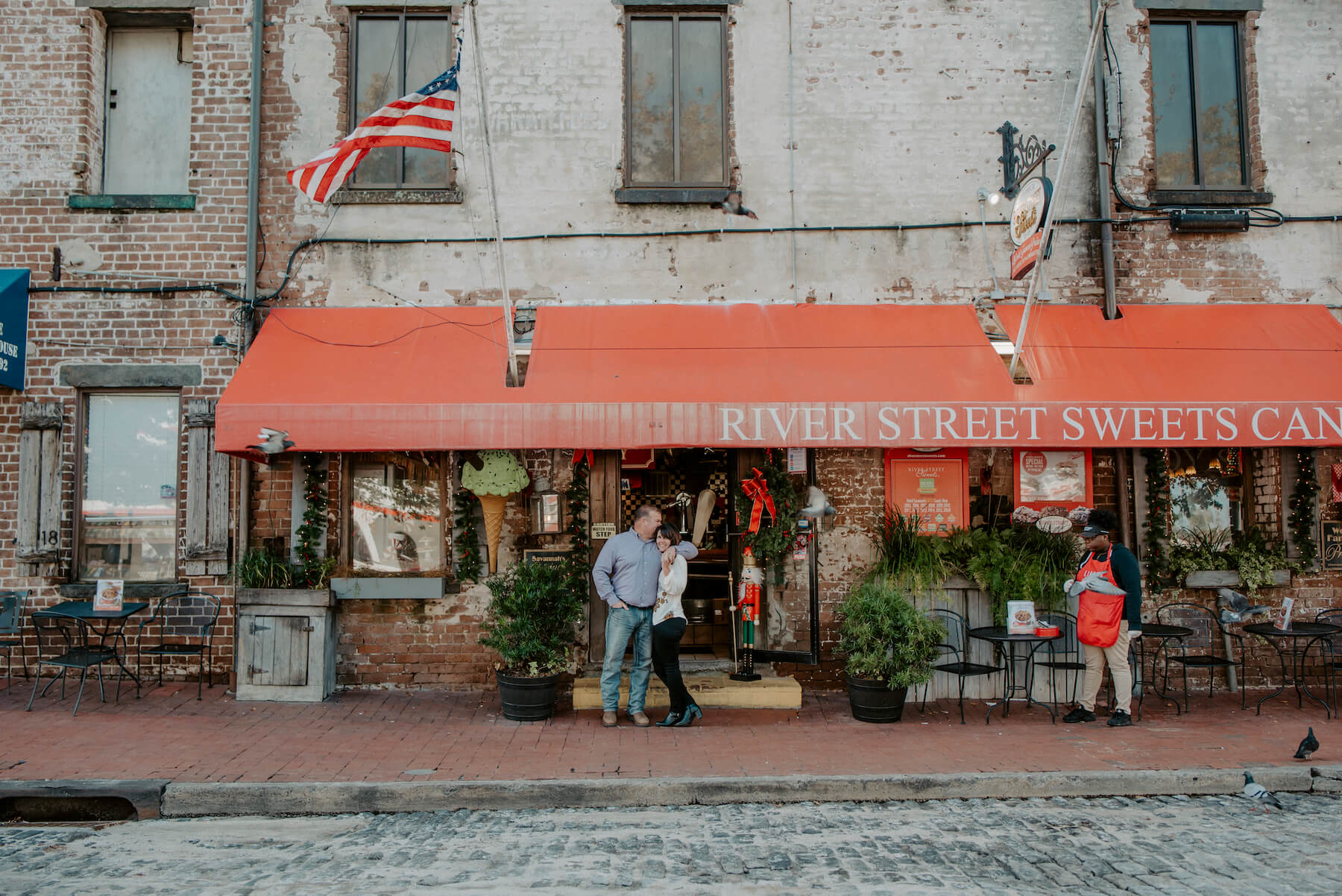 Photo: Flytographer in Savannah. Cristi and partner celebrate their anniversary in Savannah on River Street with a couple photoshoot. 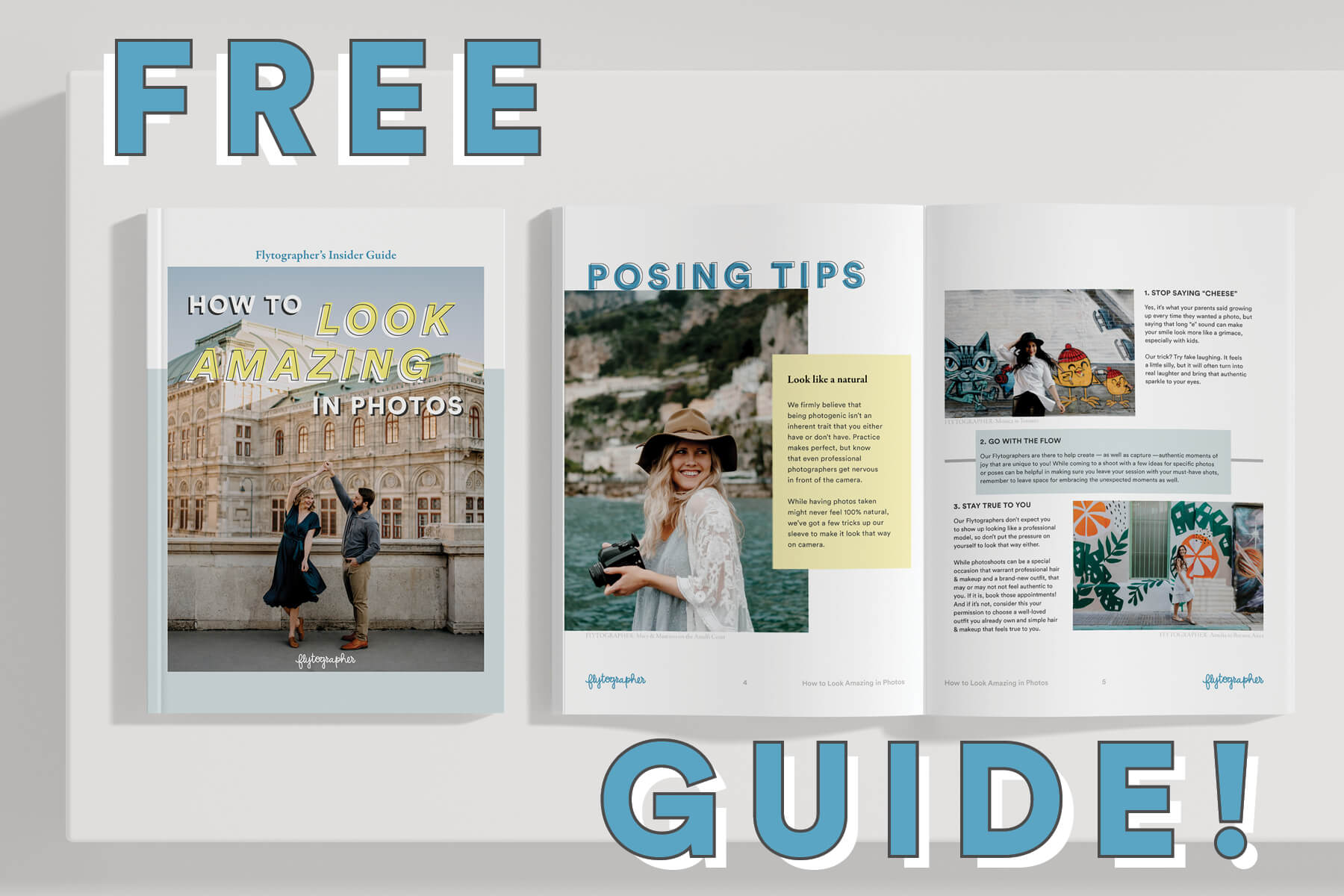 Ellis Square in Downtown Savannah has a unique and special history, and now is one of the most popular Squares for both tourists and Savannah residents alike. Originally laid out in 1733, Ellis Square became a parking garage before being demolished and reopened as a Square again in 2010. Today Ellis Square’s centerpiece is a fountain/splash pad that entertains both children and adults! 💦 Photos here are beautiful during the hot days as well as at night when the fountains are lit up in a variety of colours. The modern vibe of Ellis Square is different from the rest of Savannah’s Squares (and much of the city itself), making it a unique spot to visit and one of the best places to take photos in Savannah. 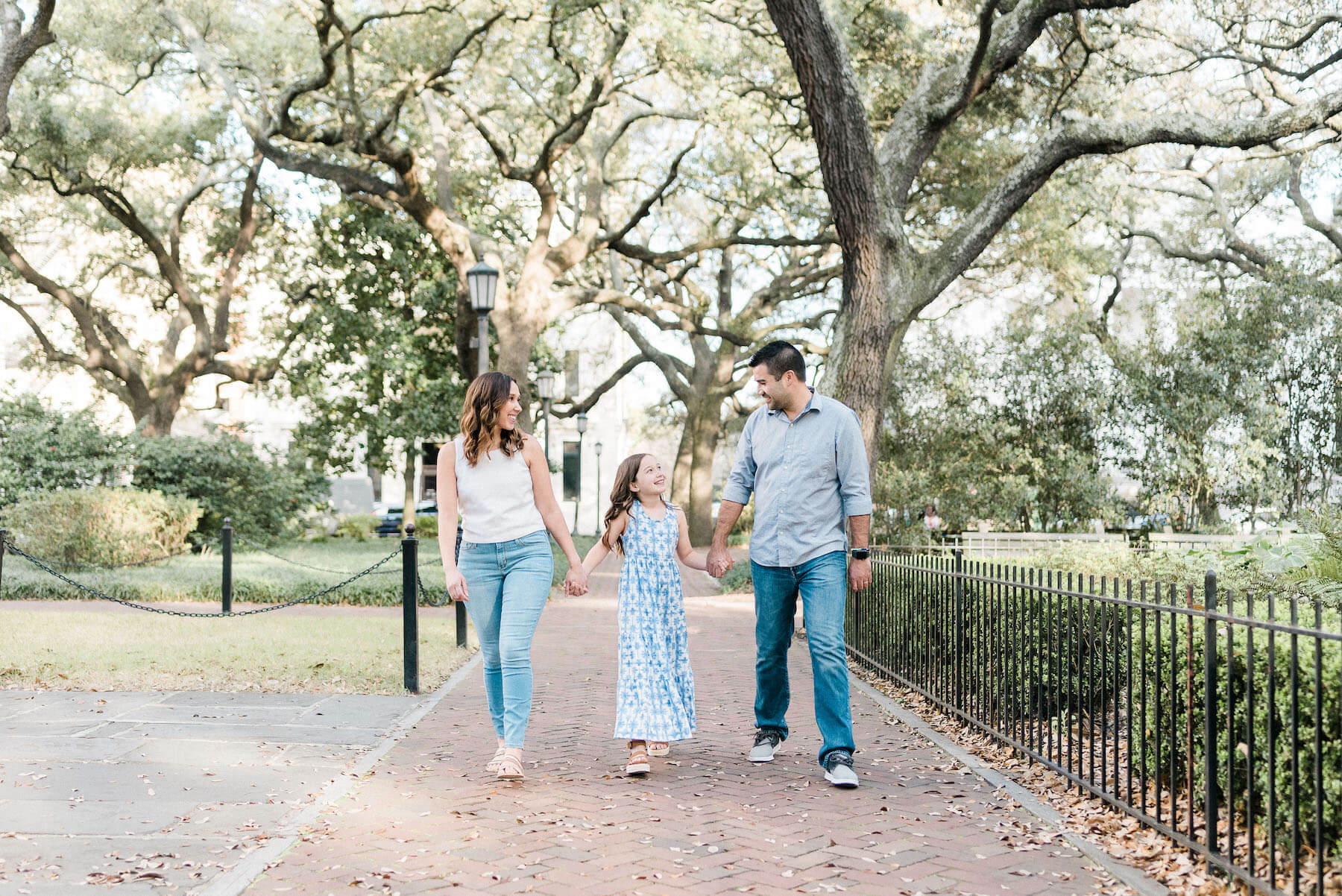 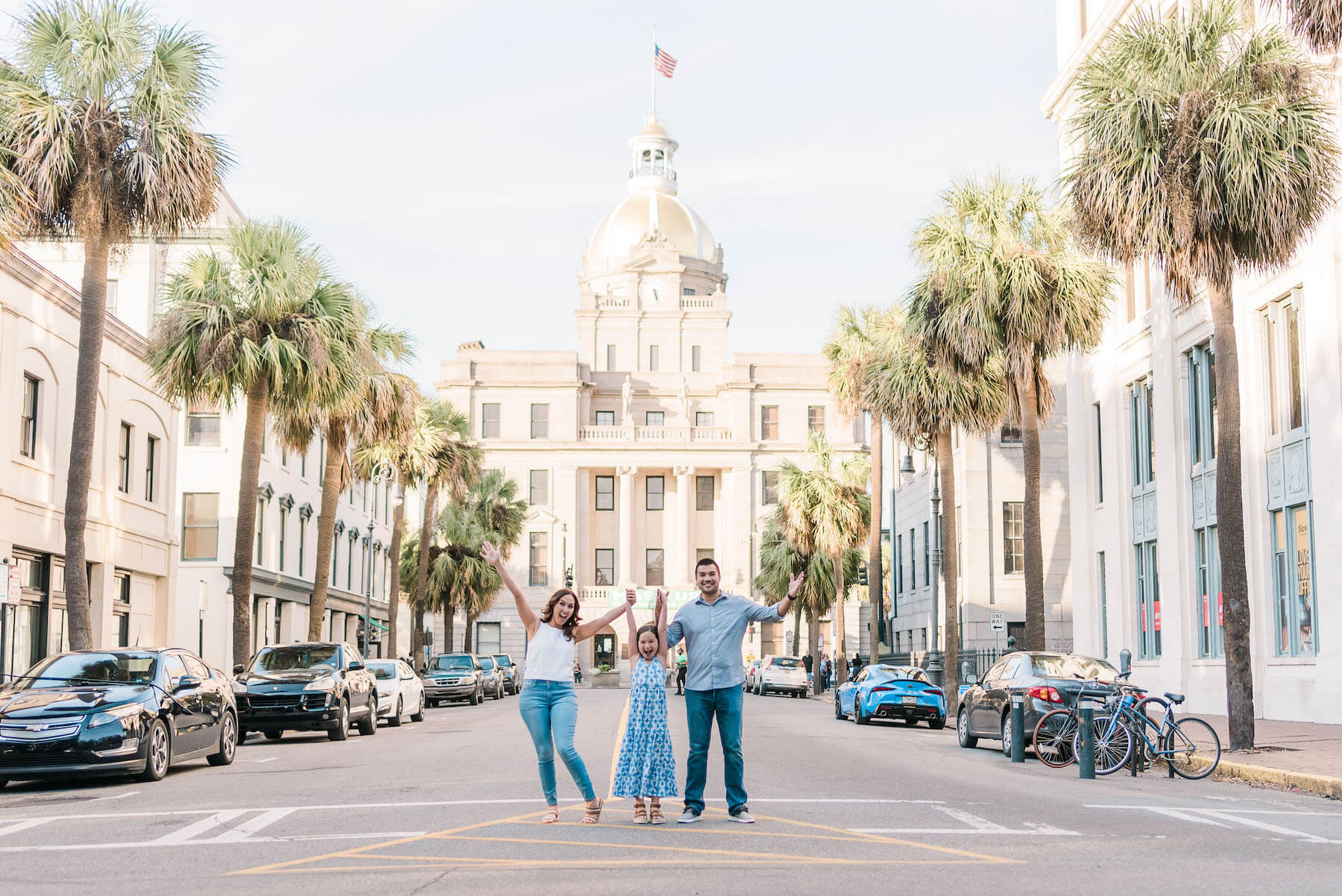 Photo: Flytographer in Savannah. Vanessa and family capture a beautiful day together in Savannah at Ellis Square with a vacation photoshoot.

Savannah’s Historic District is one of the oldest and largest historic districts in the entire country. Not only is it accessible and walkable, it feels like taking a trip back in time due to the incredible preservation efforts made in this area. The Savannah Historic District itself encompasses the original town plans from 1733, including the Squares mentioned earlier. Seeing the whole of the Historic District can be done walking, biking, by Segway, or via trolley tour. 🚋

Itching for some dark and mysterious tales while you’re in Savannah? Look no further than the well-known (and very photogenic) Mercer-Williams House. Probably the most well-known home in all of Savannah, it’s also the only historic home to take up an entire city block (the “home” is actually a 7,000 square foot mansion). Have you heard of “Midnight in the Garden of Good and Evil”? This is the spot! We’ll keep the Mercer-Williams House secrets hush-hush on this one (🤫), but if you’re wanting to know more, sign up for a Savannah ghost tour, or at least do a little digging online to satisfy that haunting itch — this place is both spooky and tantalizing. 👻

Want to see a couple more photogenic (albeit, less haunted) Instagrammable places to highlight on your social media? 📱Stop by the charming pastel-coloured triplet townhomes in Savannah’s Rainbow Row (not to be confused with Charleston’s Rainbow Row); located on East Bryan Street, they’re easy to get to and fun to photograph. Another favourite for photos and food is the Olde Pink House — Savannah, GA is just showing off now when it comes to colour and class! A meal at (or at least a food-less photo op outside of) the Olde Pink House will remind you just how photogenic Savannah’s Historic District is — partly a Parisian magic feel, but mostly seeping with Southern charm, we just can’t get enough of this place! 💗 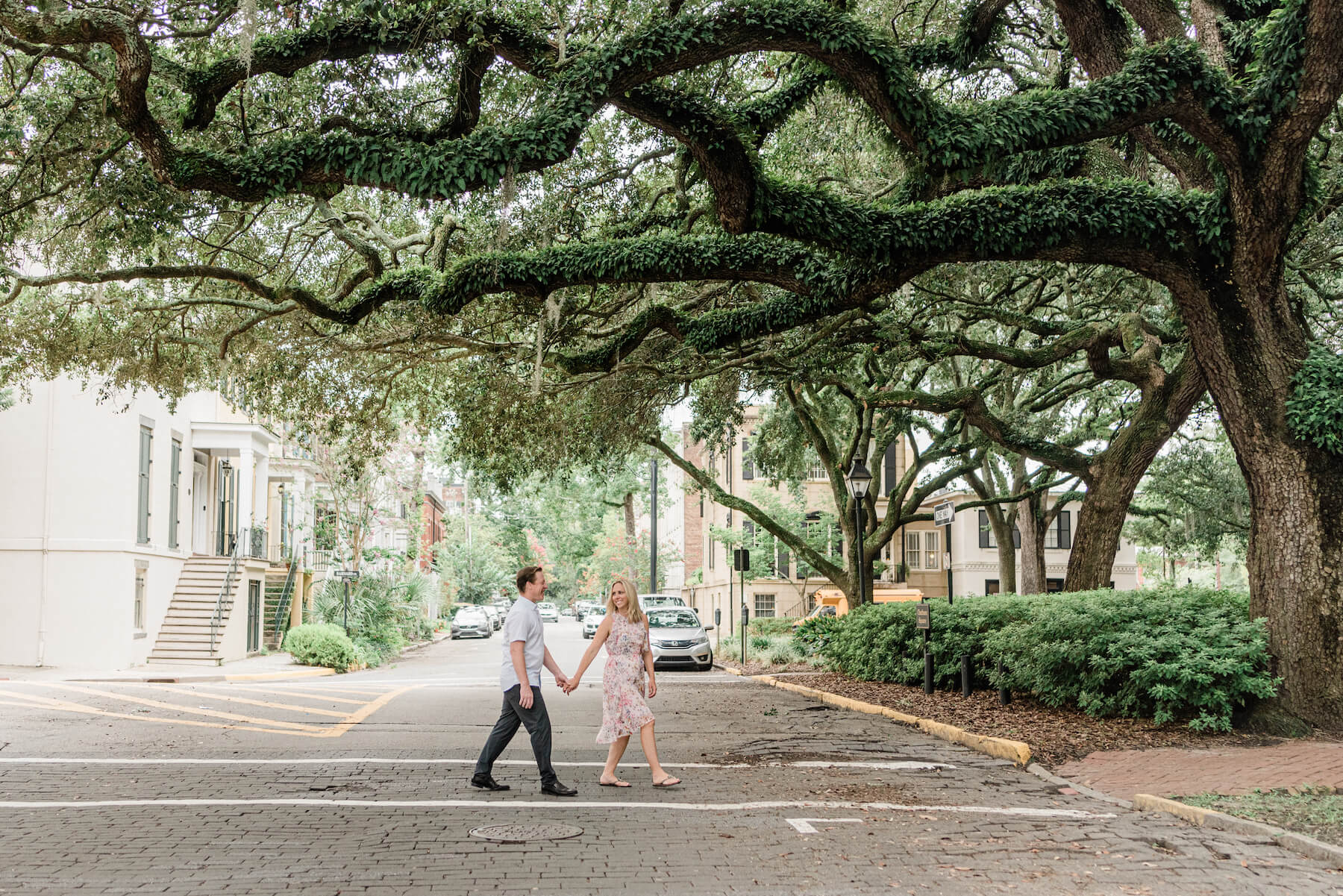 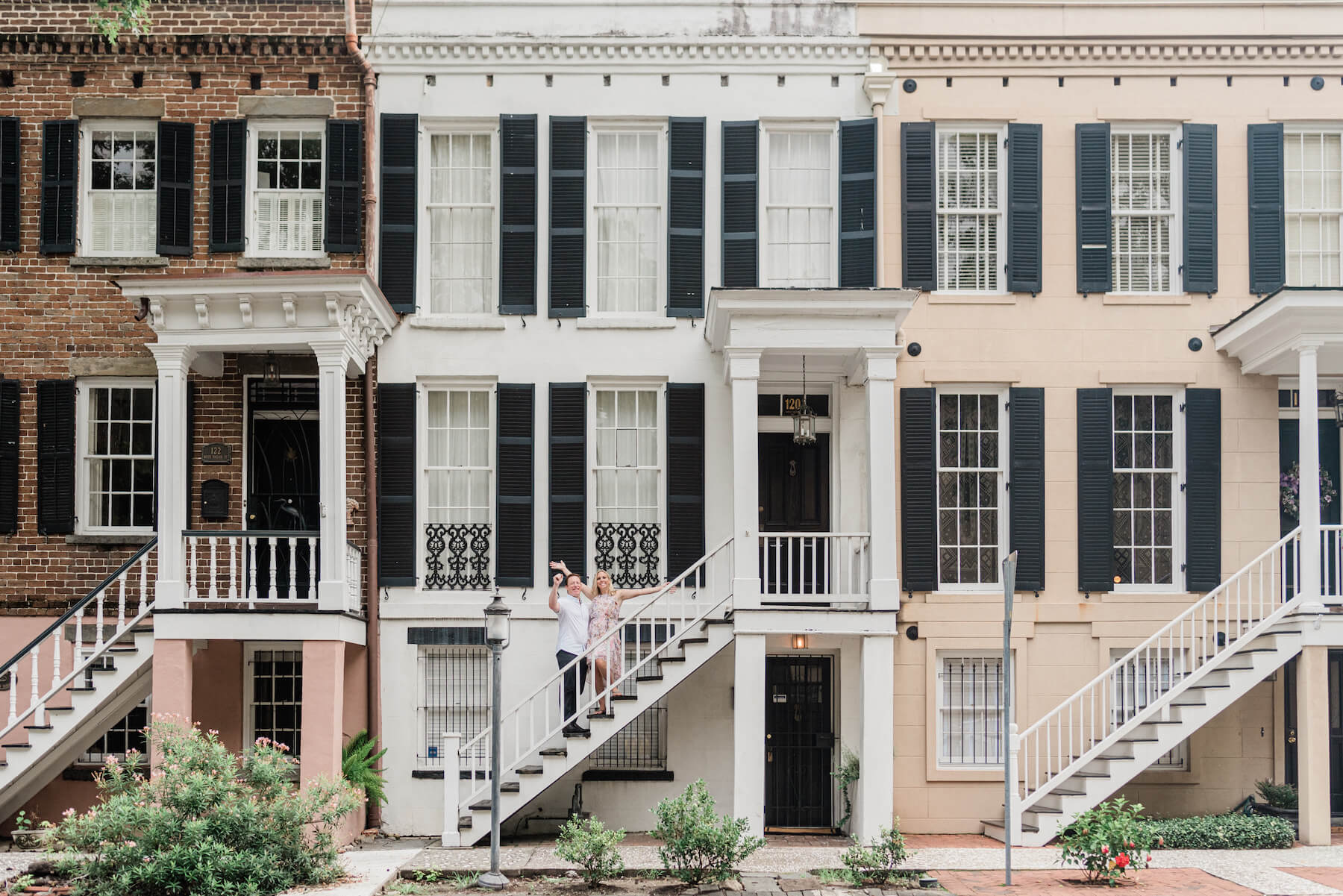 Photo: Flytographer in Savannah. Pasha and partner capture their anniversary in Savannah’s Historic Landmark District with a couple photoshoot.

Historic Jones Street has been named one of America’s most enchanting streets — a true honour, and a high bar to set! Located in Savannah’s Historic District, not far from Forsyth Park, half of Jones Street is still lined with original red bricks. 🧱 The street and sidewalks are wide and welcoming. Historic homes here take you back in time at least a century (or two… or three). American flags, iron gates, planter boxes and large pots, and last but not least, the Southern live oak trees dripping in Spanish Moss are the true stars of this street. 🇺🇸 About as picturesque as it gets, Jones Street is one of the prettiest streets and best places to take photos in Savannah. 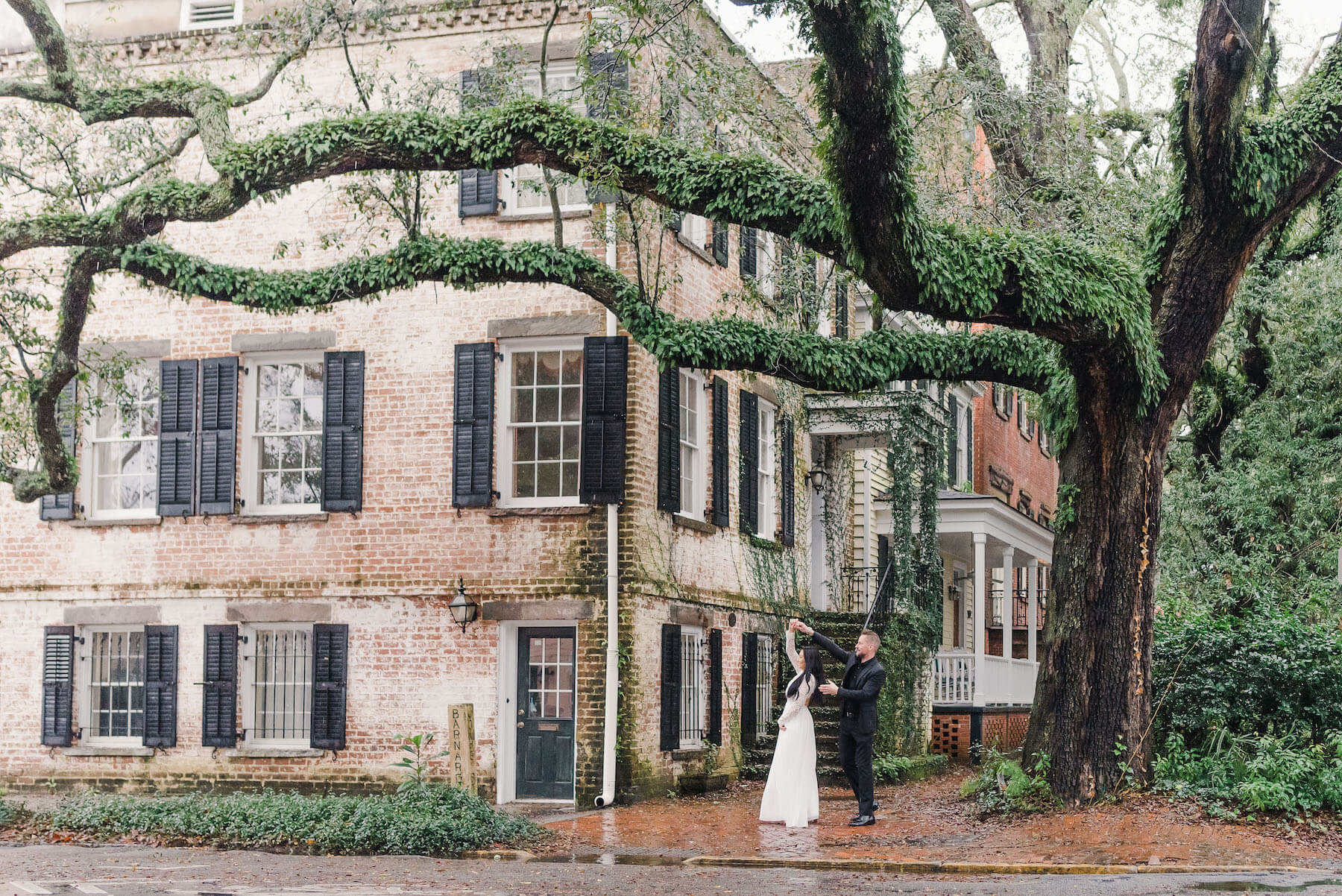 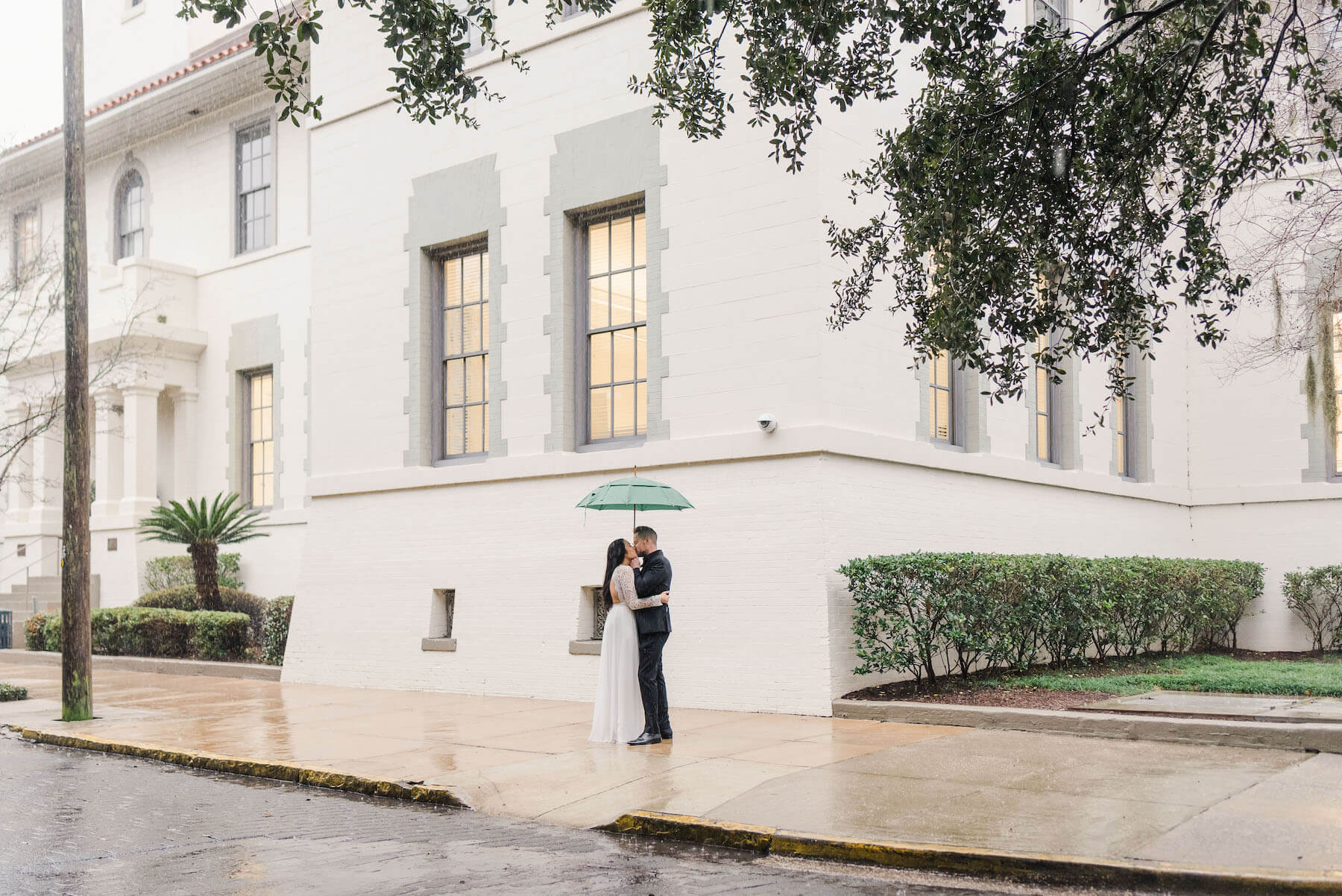 Photo: Flytographer in Savannah. Alisha and partner capture their anniversary in Savannah on Jones Street with a couple photoshoot.

About 20 minutes from Savannah’s Historic District lies Wormsloe Historic Site. If you’re wanting photos that capture tunneled live oaks and dangling moss, it doesn’t get much more idyllic than Wormsloe. 🍃 After entering, you’ll take a mile-long drive down the most beautiful stretch of 400 trees. You’ll also find a Colonial estate, museum, shop, and additional miles of trails should you want to keep exploring Wormsloe. Photos here hardly do justice, but it’s absolutely worth a solid try! 😉 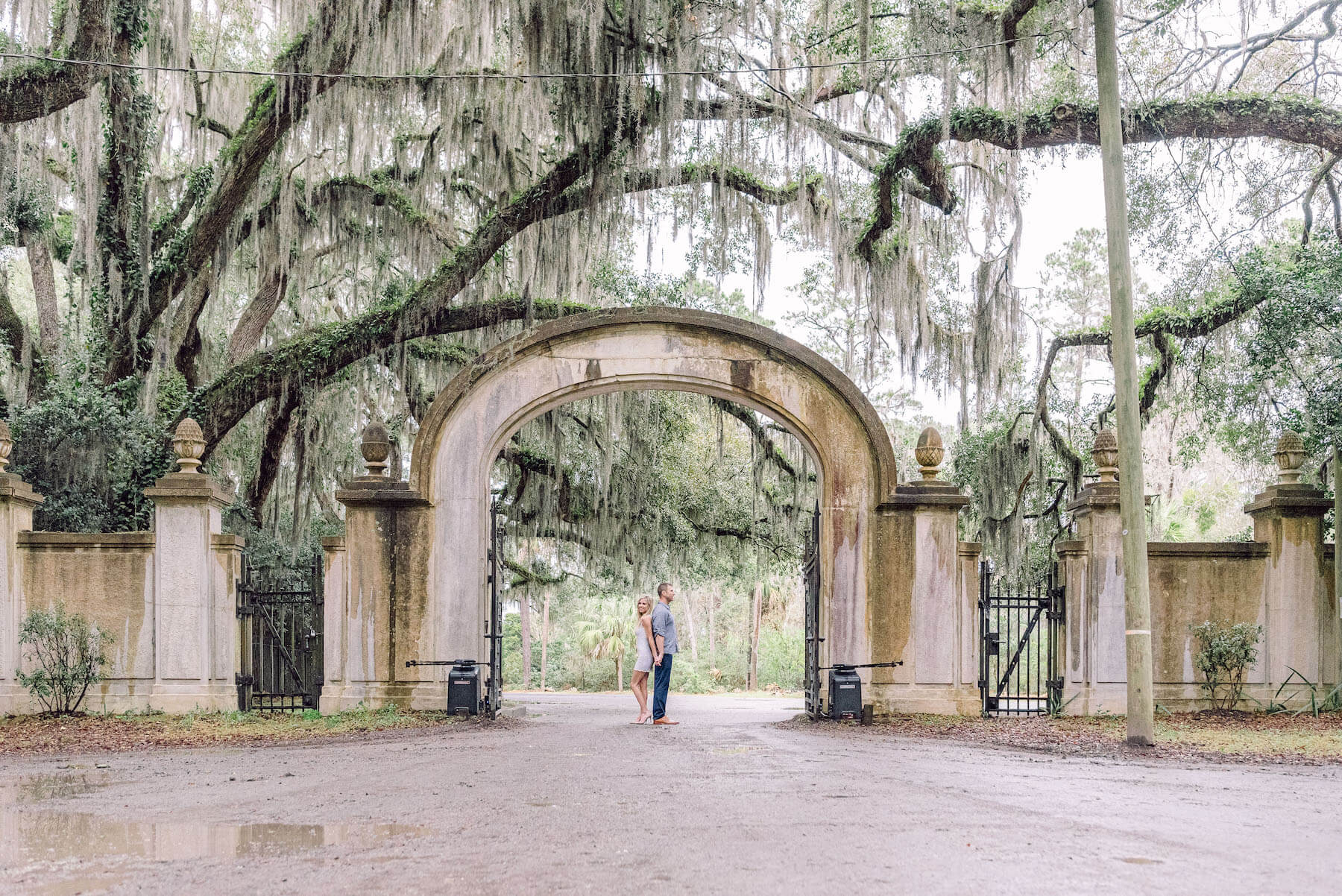 Photo: Flytographer in Savannah. Alyssa and partner capture a couples trip together in Savannah at the Wormsole Historic Site with a couple photoshoot.

Only a few blocks from Johnson Square is Leopold’s Ice Cream, Savannah’s best! Although the line can be long, it moves quickly and is definitely worth the wait. Leopold’s Ice Cream has been around since 1919, which means it’s a trustworthy source for excellent ice cream, don’t you think? 🍨 The best part of Leopold’s are the flavours — with options like Chocolate Chewies & Cream (which includes Georgia pecans!), and Lemon Custard (the recipe hasn’t changed since 1919), it’s a must-try, must-photograph Savannah stop. 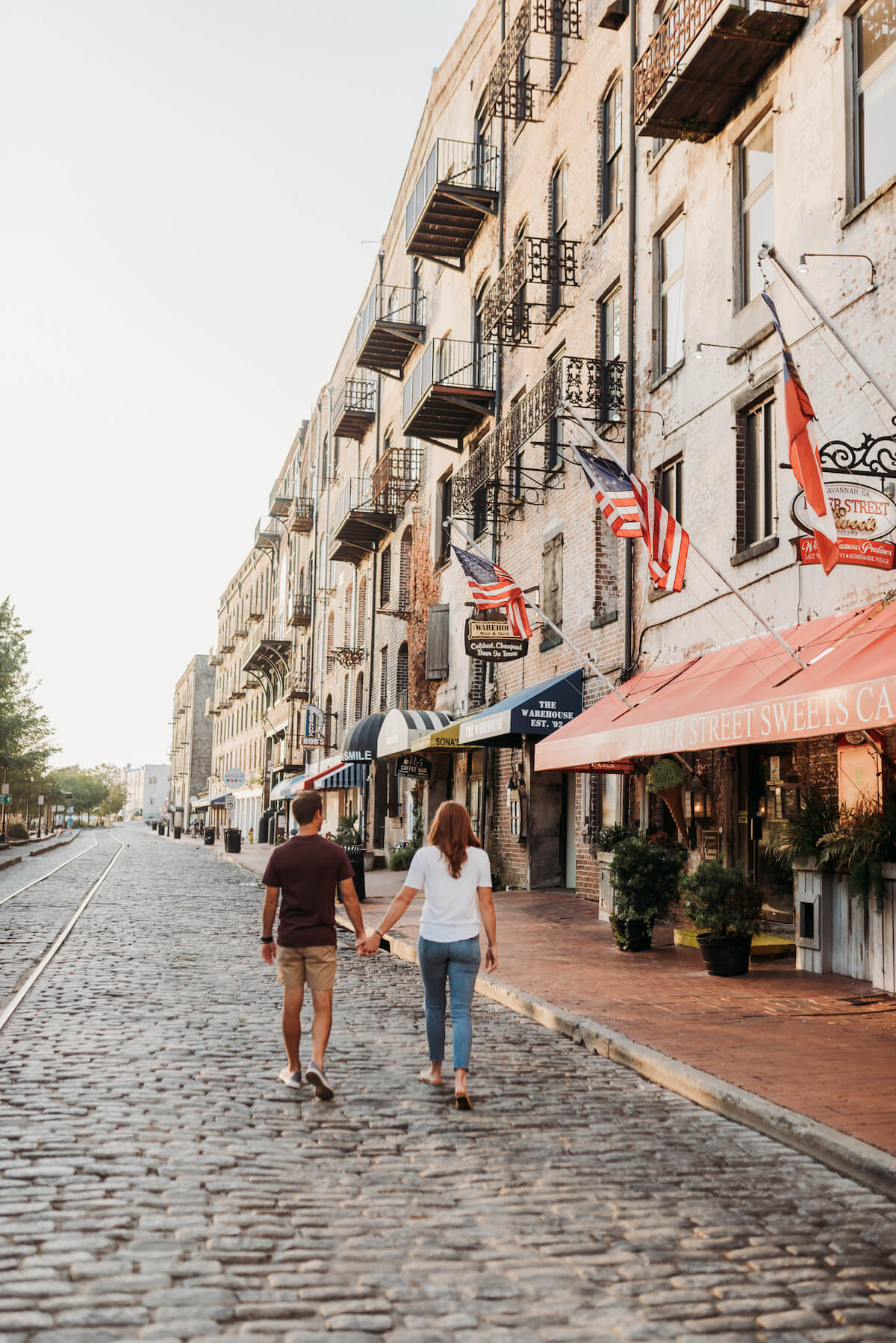 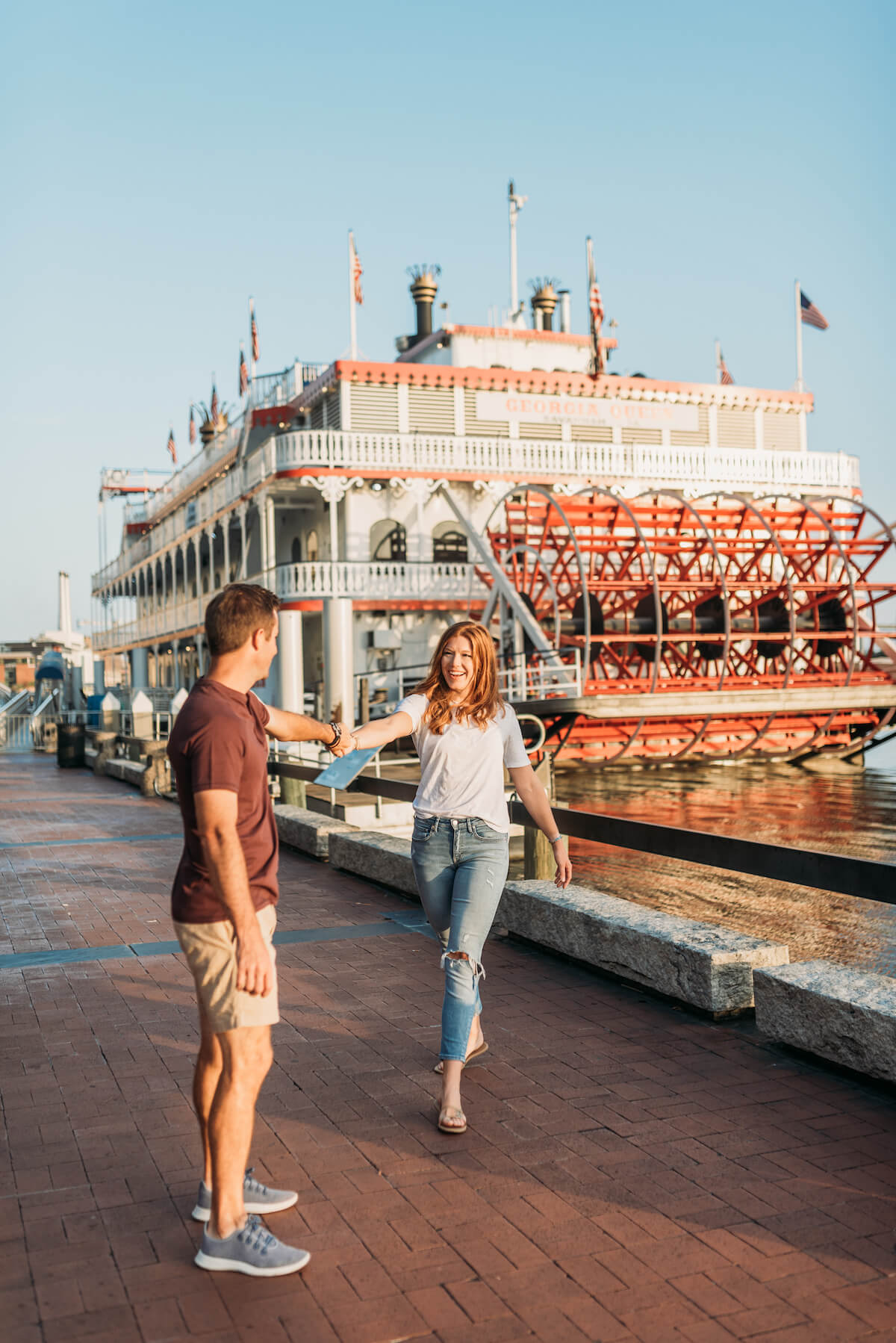 Photo: Kathleen in Savannah for Flytographer. Morgan and partner capture a trip together in Savannah at Johnson square with a couple photoshoot.

Be sure to bookmark this Savannah photo and travel guide for your next visit to Savannah, and don’t forget to schedule your very own Flytographer photo shoot to capture some of your time in this magical city, sans-selfie! 📸 With a handful of amazing professional photographers who know all the best Savannah tricks and tips, booking a photoshoot with Flytographer is our best and favourite tip for awesome Savannah photos.

When you visit Savannah we hope your itinerary is full of fun, food, and history … not to mention some great Savannah photo spots! The city of Savannah is a true Southern gem, filled with history, delicious eats, dreamy strolls, green space, Instagrammable places, and a whole lot more.

We can’t wait to see what you capture while you’re in Savannah, Georgia! 🎬 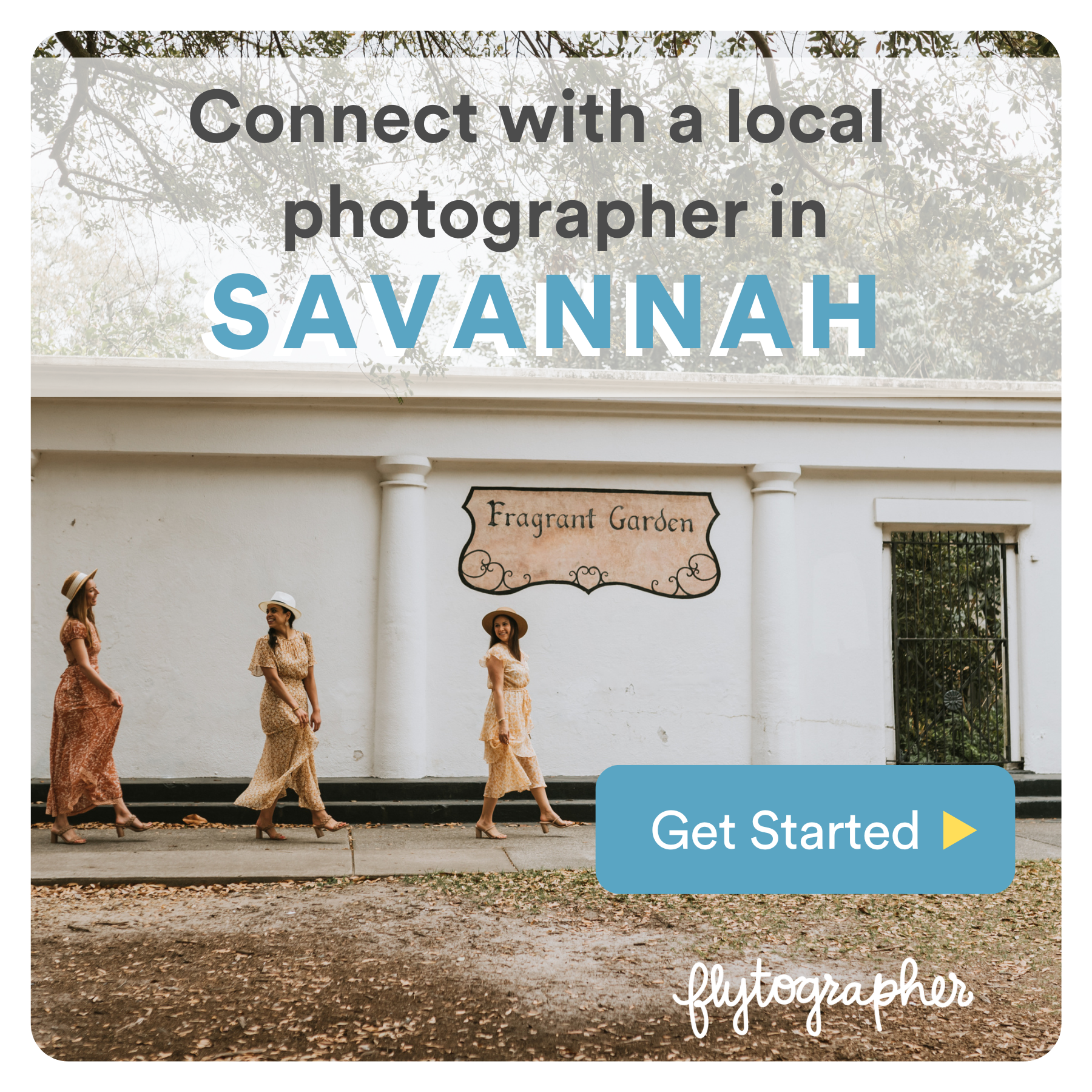 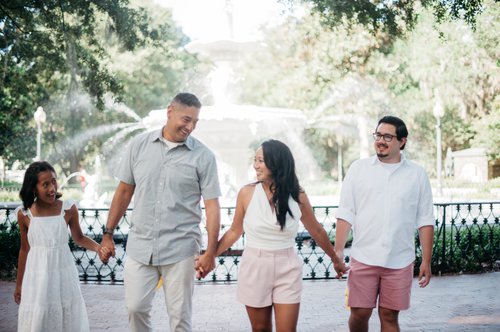 “Hilary is a talented photographer. She was wonderful to work with. We picked Forsyth Park but we also strolled the surrounding streets and she had some great ideas. We loved all our pics! We will for sure recommend to friends and family as well.” 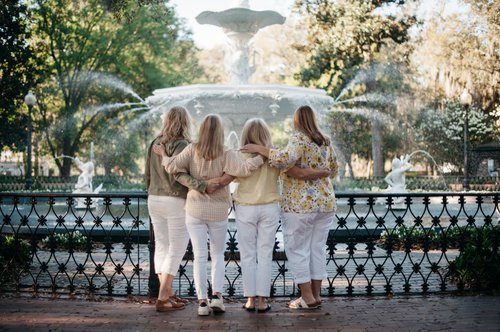 “What an incredible experience with an adorable photographer, Hilary. She was perfect for our group of 4 friends. She captured the best of us in beautiful Forsyth Park in Savannah. She was professional, friendly and offered great suggestions to get the best shots of us. Would highly recommend Hilary!!!” 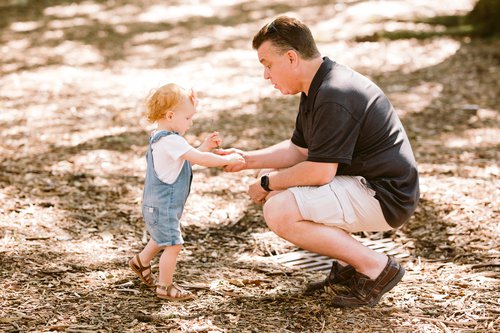 “Shannon was absolutely FANTASTIC! I am so happy we chose him to capture our family- he was such a pleasure to work with! He was so patient with our shy toddler and made our family (grandparents included) feel so comfortable. Our photos are so beautiful! Do yourself a favor and choose Shannon- you will be SO happy you did!”

Photo Spots Marrakesh On the foothills of the Atlas Mountains and near the Sahara Desert, Marrakesh (sometimes spelled...