An Epic Proposal in Prague Two Years in the Making – He Said Yes! 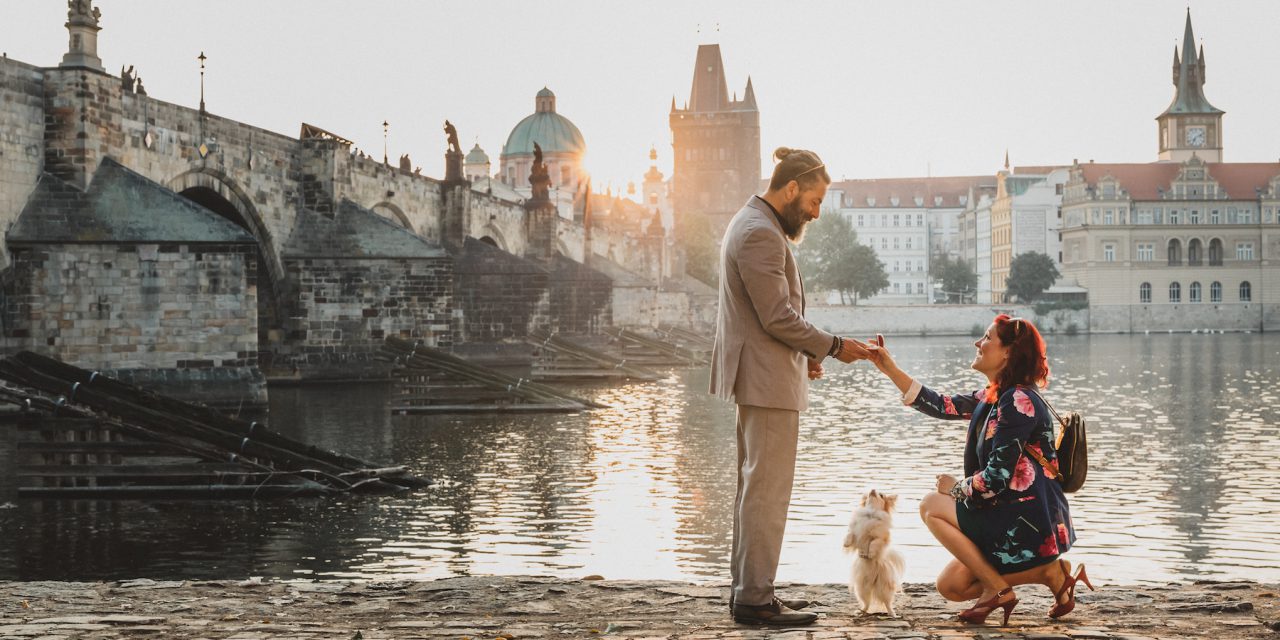 When it came time to propose to her longtime love, Sonja (the blogger behind Montecristo Travels), knew that every detail had to be perfect – from the stunning location to thoughtful details such as creating the engagement ring that her partner had always dreamed of. After two years of careful planning, Sonja got down on one knee to ask the love of her life to marry her – and HE said yes! Captured by their proposal photographer Flytographer Sarah, this stunning riverside proposal will take your breath away.

When Sonja began planning her proposal, it all started with the ring. Her partner, Stefan Dumas, is a descendent of Alexandre Dumas, one of the most widely-read French writers and author of famous tomes The Count of Monte Cristo and The Three Musketeers. When Stefan’s family moved to North America, the Dumas’ signet ring went missing.

When the couple was just at the start of their romance, Stefan mentioned to Sonja that one of his biggest regrets in life was not having that family ring replaced. Nine years later, Sonja knew exactly what she wanted to give him for the proposal. After reaching out to historians and researching every detail she could find about the ring, she hired a retired Hungarian jeweller to painstakingly handcraft it because she wanted it done “the old way.” She then patiently waited 18 months for him to create it.

When the ring was finally ready, the final pieces just needed to be put in place – details such as where the proposal would take place and how to capture this very special moment.

She decided on Prague because, as she told us, “I am obsessed with architecture and how cities have evolved, and Prague is unique in the world. It has managed to escape the grid system that Napoleon implemented pretty much everywhere he went. So, as a result, Prague has this wonderful ability to allow lovers to get lost in its tiny little winding streets that were never designed for cars. So for me, Prague maintains that true sense of what we would call a fairy tale.”

Once the location was checked off, Sonja began to develop the perfect plan to keep the proposal photos a total surprise. Having reached out to Flytographer a year earlier to capture their vacation in Dubrovnik, Stefan was not at all suspicious when she recommended getting their photos taken again on their trip to Prague. Thinking that he was in for a regular vacation shoot, he was totally surprised when Sonja got down on one knee (with their sweetlong hair Chihuahua fur-baby, Montecristo, by their side!).

Now, not only do they have their own memories of the moment, but spectacular photos to help them relive the day. As Sonja says, “In the end… after a moment, a trip … when it’s over, all you have is your memory. Science, however, has shown that we don’t recall the original memory when we look back, but rather the previous memory of the memory. As such, in time, it degrades; it becomes a pale recollection or even faulty. The photos keep that memory brighter.” We know this is one proposal that won’t soon fade!

8 54 Best places to take pictures in Dubai, UAEDubai’s combination of old and new, quaint and modern, city and desert is a...