This proposal is giving us all the feels – from their super cute beginnings, to how James knew My Le was the one, you don’t want to miss this super romantic Central Park proposal that even the rain couldn’t stop! 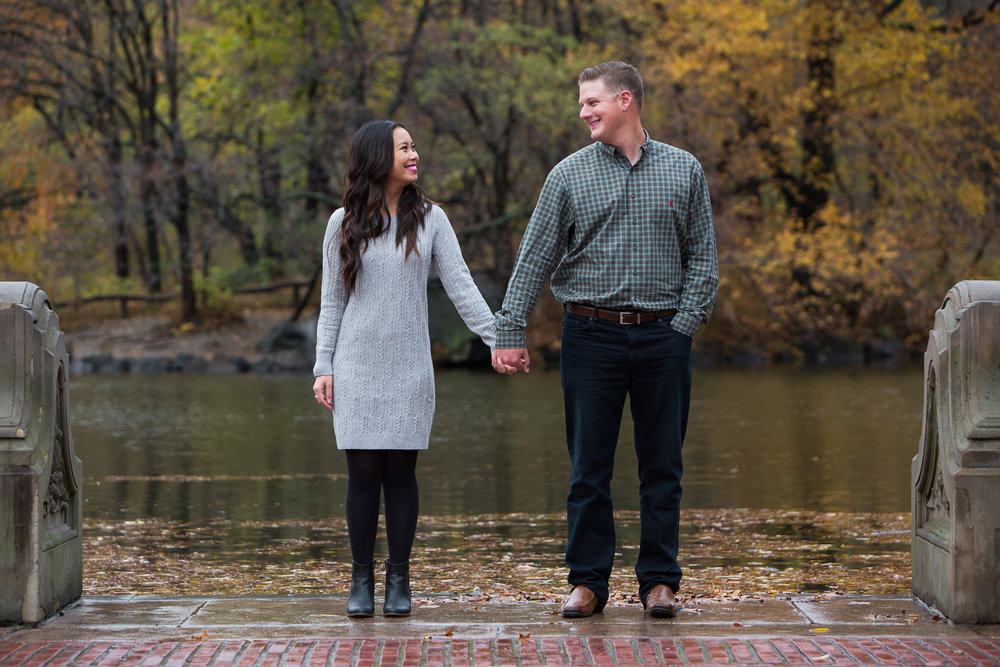 “My Le and I first met in 2007. In my Junior year of high school, I transferred to a Catholic school. One day that I had off, I decided to go visit my old school. While chatting with some friends in the main hallway, I looked out of the mirrored glass into the lunch yard to see if I saw any of my other friends. My eyes landed on this “new girl”. I immediately asked my friend who is the new girl? She said that she just transferred from another school (she only went to my old school for 3 days before transferring back to her school). As I went to go outside to go introduce myself, the bell rang and the new girl had vanished. I told my friend to help me look her up. Later that evening I got a message with a link to a MySpace profile! The new girl had a name, My Le Nguyen.

I sent her a message explaining the scenario and luckily she replied. We chatted and went on a handful of dates over the next 18 months. Finally, in June of 2008 we made it official and we never turned back! Little did I know that nearly 10 years later I would ask her to be my wife.” – James 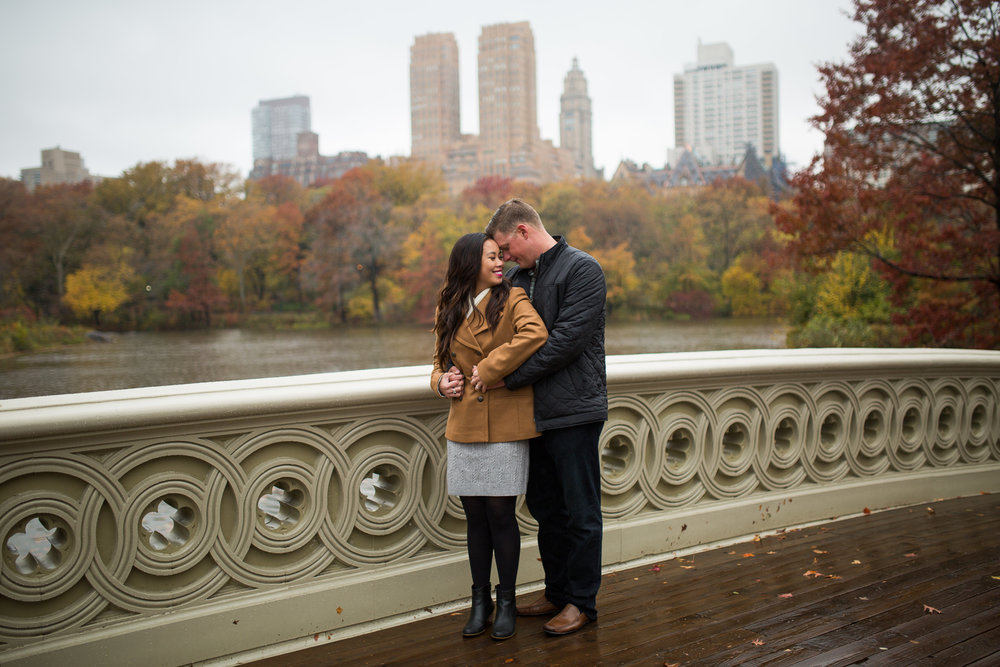 “One night my father and I sat down and had a very long conversation about life. Specifically, me starting my career. He asked me if I was happy with where I was now that I had finally gotten to the point that I had dreamed about for many years leading up then. As I thought about it, discussing it aloud with him, I told him that I owed a lot of my success to My Le.

I told him that over the past 4 or so years I had become a totally different person and I was far from perfect, but I was happy with were I was. My father added that he was grateful that I made it to where I wanted to be in life. He continued to say that he was very fond of My Le and was happy that I had a great woman in my life to keep me centered and to be there by my side. He said we made a great couple and he could tell we were very happy together. After thanking him for the kind words, I told him I knew that I truly loved her. He asked how I knew?

My response was this: “I know that I can truly look you in the face and say that I have unconditional love for her. In life I have experienced many things, including what I thought to be love. However, I was mistaken because as cliche as it may sound I now know what true love is. Love is hard to describe. It is not simply stumbled upon or found at first sight, it is cultivated. 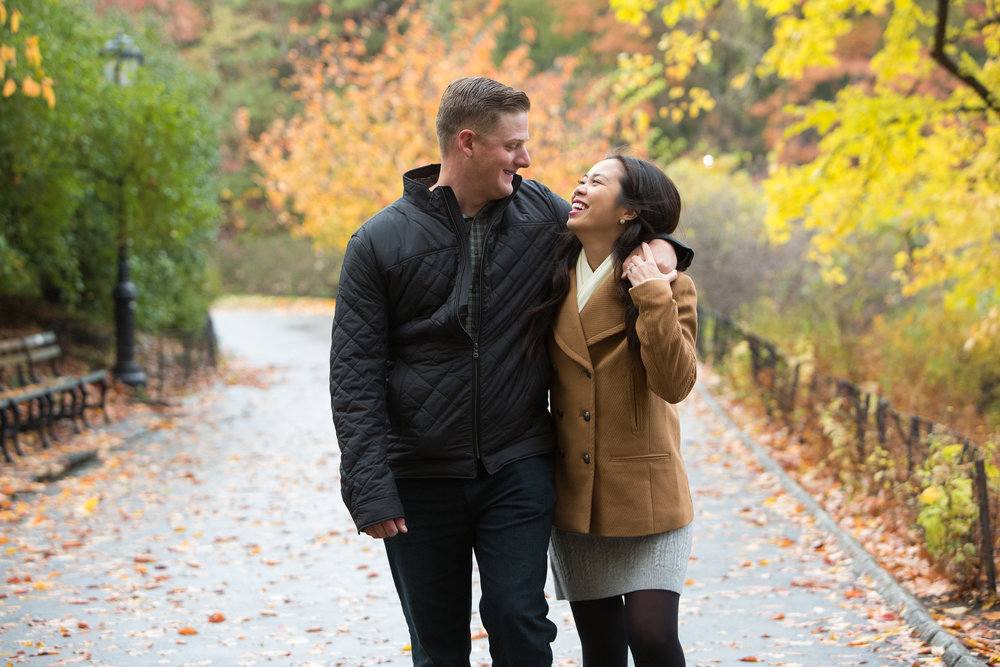 “In the 8 years we (My Le and I) have been together we have been through it all. The best of the best and the worst of the worst in each others lives. As we progressed through each of our trials and tribulations our bond has become stronger and stronger. And that no matter the situation, I would do anything for her without hesitation. No matter what I would be there for her for anything. My Le is my best friend. She is the first person I want to see in the morning and the last one I want to see at night. There is no place I would rather be than spending time with than her.

And the crazy thing is, I love her more now than ever. Every time I kiss her it’s like the first time all over again. Every time we hug I still feel the warmth and butterflies of a nervous teenager. And every time I look her in the eyes and tell her I love her I mean it more than she could ever imagine. I could not imagine my life without her.”

After a brief pause, my dad told me, ” Well son, I think you know what to do.” And I knew exactly what he meant. 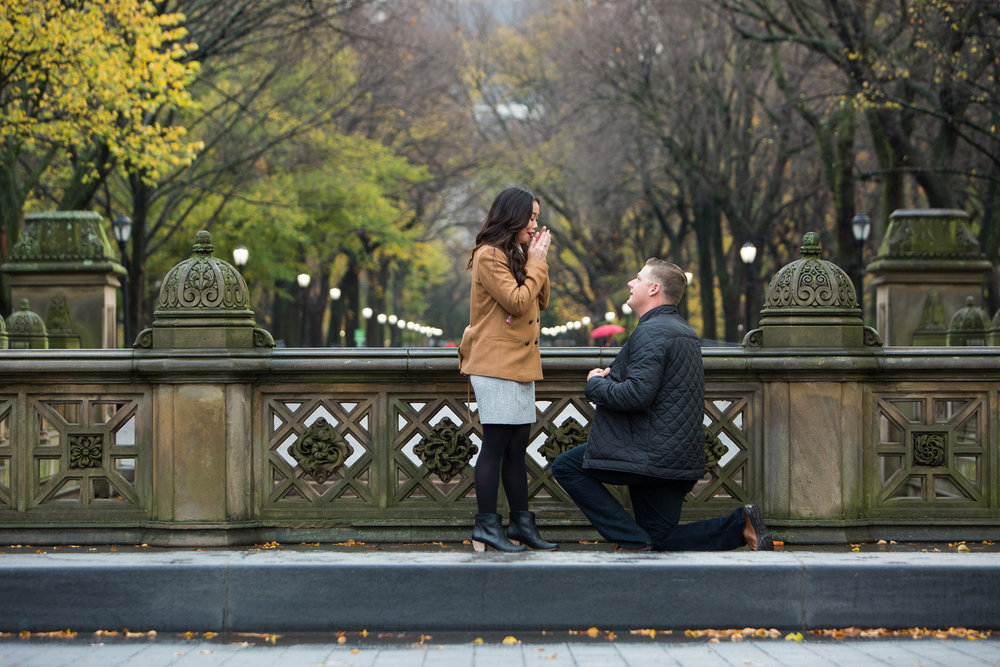 About a year ago, we decided to go to New York City before Thanksgiving. We always wanted to visit there and made it a tradition to take a trip together during the winter break every year (Last year was Chicago). Soon after, I realized that it was time to take this to the next step.

Immediately, I knew that it had to be in NYC. She truly had no idea about the proposal, but in the weeks leading up to our trip she had become a little suspicious. So in an effort to defy that suspicion I decided to wait until the last full day of our trip. Scared of losing the ring, I kept it in my coin pocket in a pouch. However, after each day passed it got harder and harder to keep the ring in my pocket. I knew the proposal had to be in Central Park. I did my research on NYC proposal locations and none of them seemed right. Until I saw a picture of the Bethesda Fountain. My photographer Johnny recommended the Bethesda Terrace as a perfect location for the moment.” – James 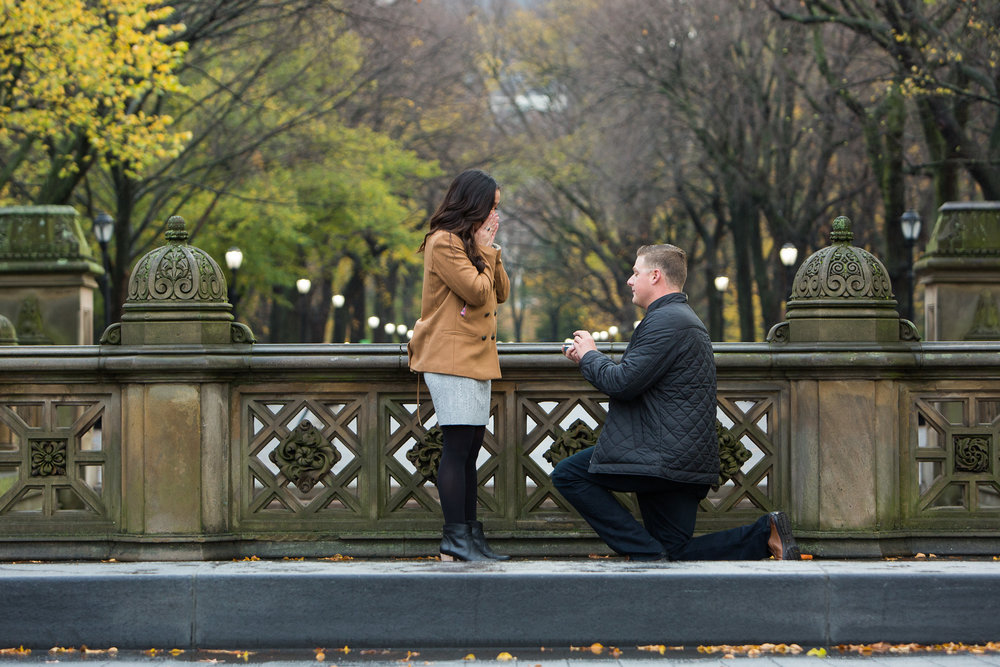 “It was a gloomy Tuesday afternoon when James and I woke up from our 12 hour slumber. We both got sick the night before and decided to miss Live with Kelly Tuesday morning so we could be well rested for our last evening in the city. James suggested we grab a bite to eat by Central Park and then walk to the Metropolitan Museum of Art. I was so ready to get out of the hotel room and get some fresh air so I didn’t hesitate but little did I know what he had planned all along. We finished eating lunch on the Upper West Side and James suggested we could walk through Central Park to get to the museum. 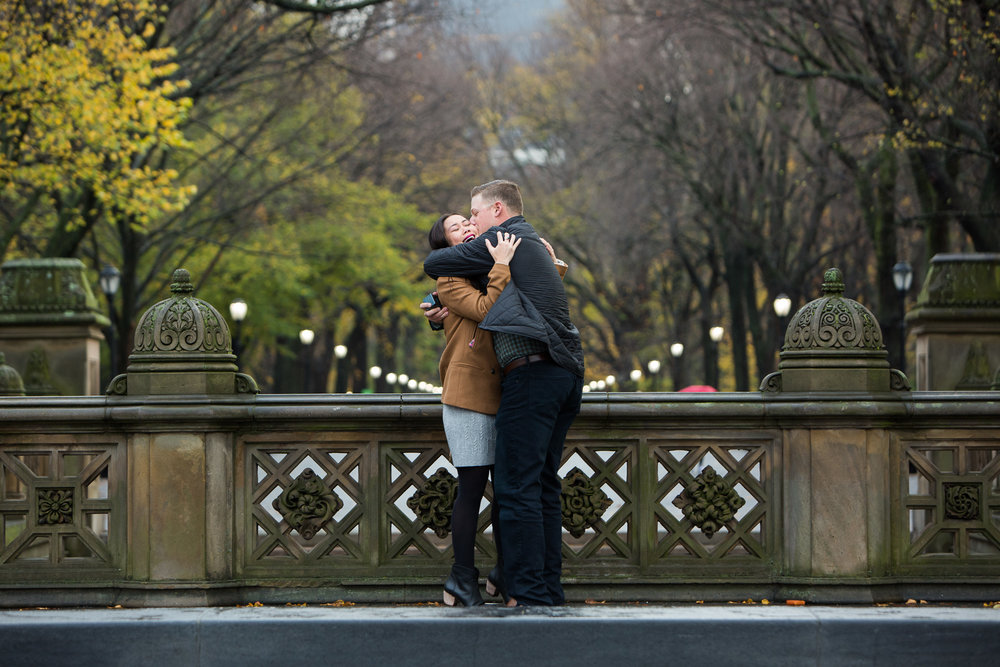 “I was hesitant at first because there was a light drizzle that started and then I noticed it was over a mile walk. I mentioned how far the walk would be but he insisted. I kept telling myself, ‘If I get pneumonia, he is NEVER going to hear the end of it.’ Too tired and sick to put up an argument about why we shouldn’t walk, I followed along.

Half way through the park, he asked if I wanted to take a picture with him. Usually I am always the one trying to get him to take pictures with me so I was eating every second of it up. I should’ve known he was up to something but I was so thrilled he wanted to take pictures so I put some lipstick on (thank goodness I did) and smiled for the camera. 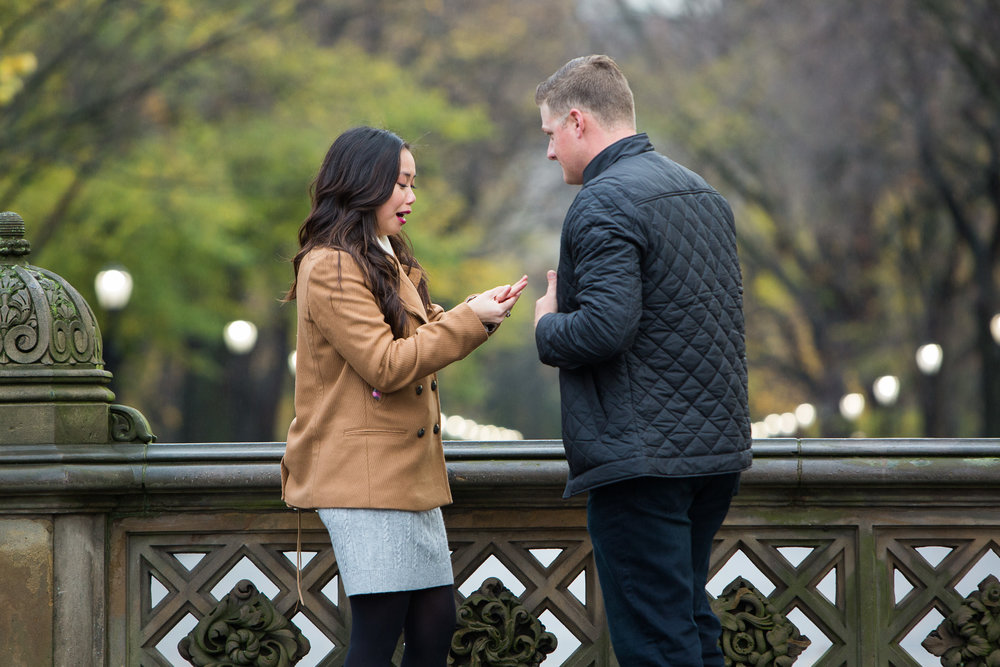 “We kept walking and he said, ‘There’s something I want you to see real quick.’ We continued on a scenic walk to experience autumn’s vibrant colors first hand. The entire park was painted with red and orange foliage, incredibly breathtaking.

The next thing I know, the love of my life drops on one knee and proclaimed his love for me. It was at that very moment that I realized I found my soulmate and my partner for life. As the tears were rushing down my face, I thanked God for putting him in my life and before I could even thank him, a guy walks up to us and James says, “This is Johnny, he’s our photographer!!” Not only did my boyfriend (who is now my fiancé) just propose to me, but he had a photographer capture the entire moment and the moments that followed it. 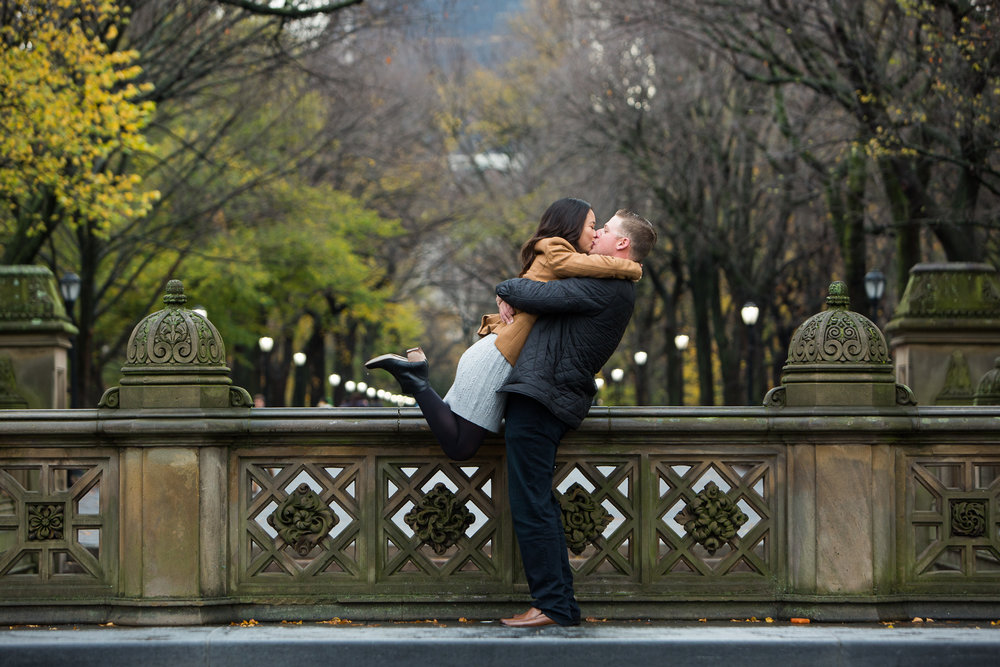 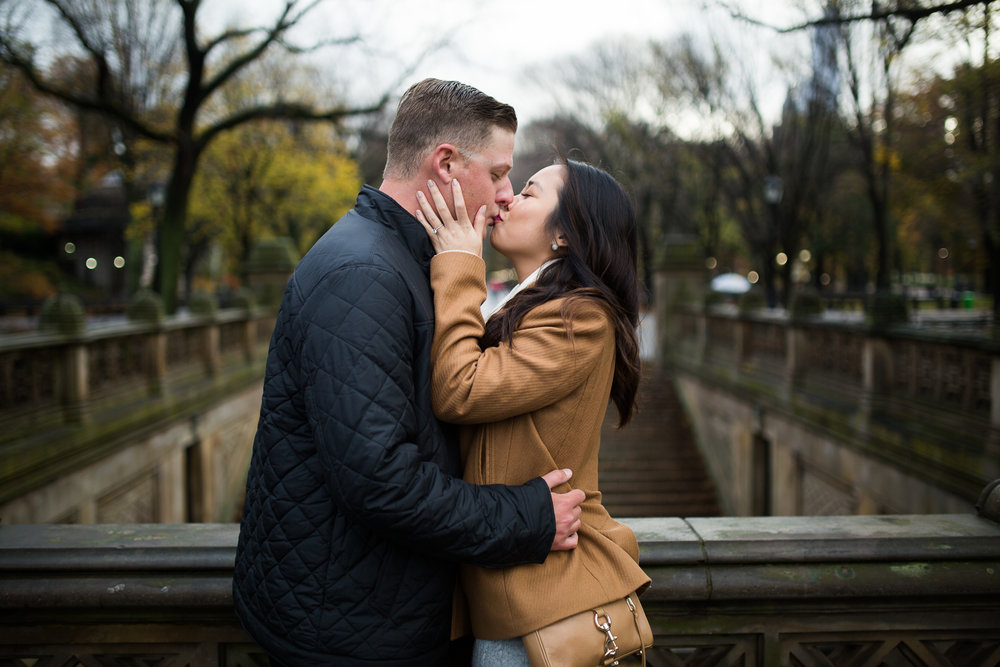 “Once we were done with our amazing photoshoot, we got back to the hotel, exhausted, and still feeling sick. We ordered take out and James made a toast and said, ‘in sickness and in health’ and I couldn’t have asked for a more perfect evening!” – My Le 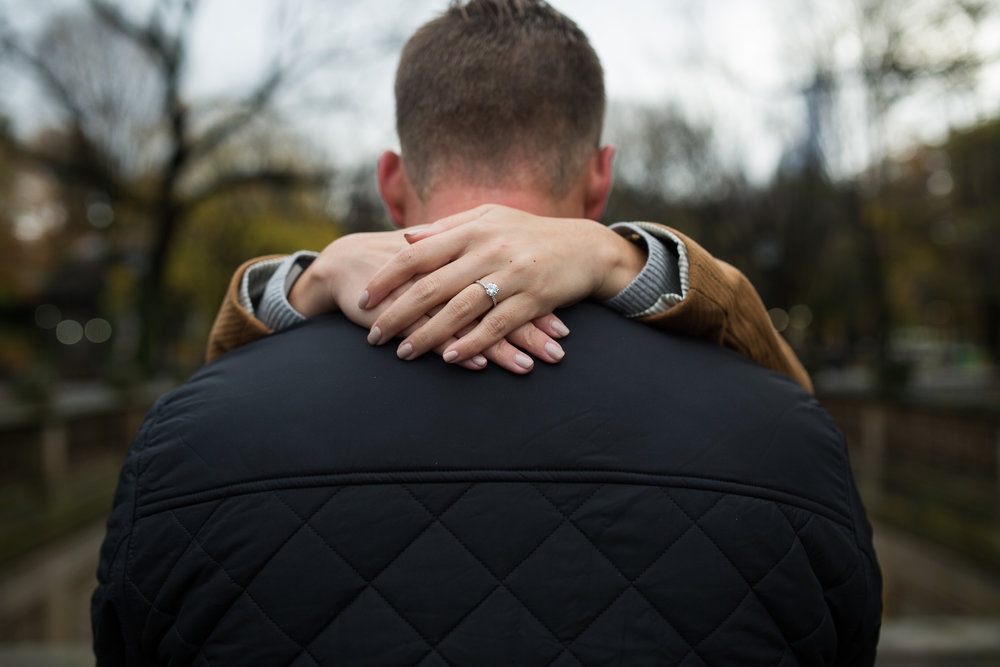