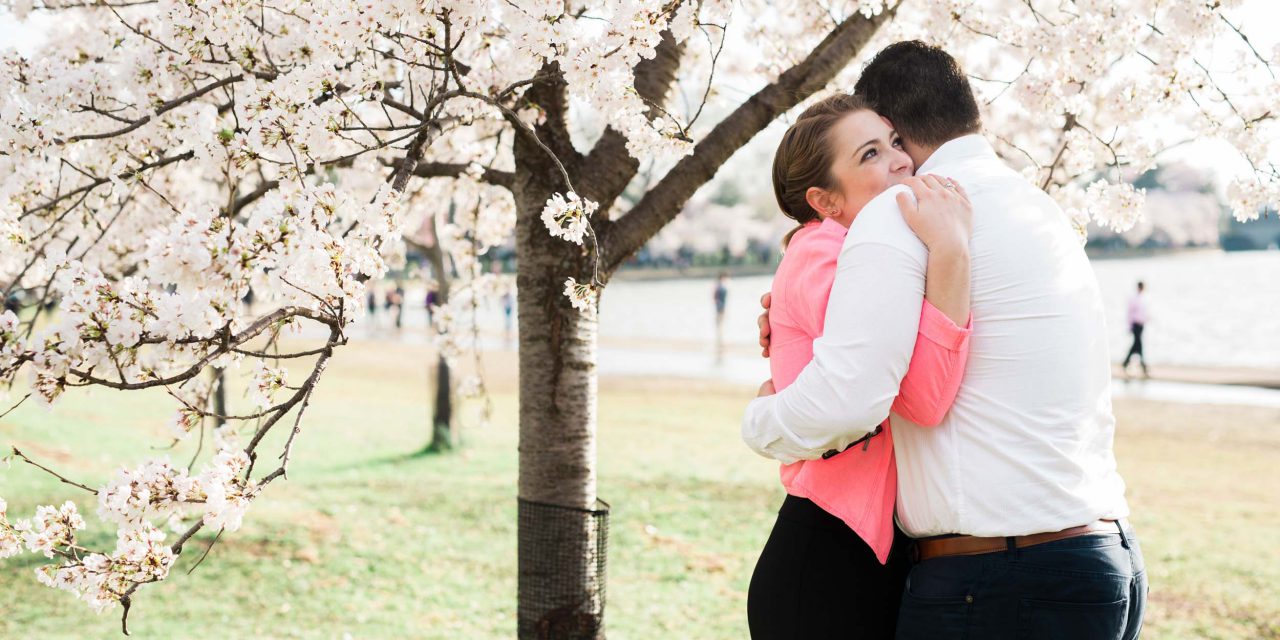 Ned and Emma’s love story is a classic tale of high school (or just out of high school, for her) sweethearts falling for each other and never doubting that they would be together forever. They’ve now made Washington, D.C. their home and Ned planned a beautiful proposal which showcased the stunning cherry blossom season for their five-year anniversary. Read on for their story and how the proposal came together.

“I knew that 2016 was the year that I would finally pop the question. Emma and I first met during my senior year of high school. We met through her younger brother, Max, who was a freshman at the time. Max and I played football and wrestled together. Emma’s family had just moved across the country from Washington state and she was taking a gap year before attending the University of Maryland, College Park. She was a super fan of Max and attended all of his games and matches. It was hard not to notice her in the stands. Eventually, I summoned the courage to introduce myself and ask her on a date.

“The rest is pretty much history. I spent as much time with Emma as I could…going to see her during my lunch, after school, etc. I took her to my senior prom. I committed to Lehigh University to play football right before meeting Emma and I was dreading having to leave her in August to go to camp. The amazing thing is that her and I never had the ‘talk’ that most pre-college relationships have. We never talked about, ‘Are we going to stay together?’ or ‘What is this going to look like moving forward?’ We always had faith in each other and confidence that our relationship would be able to withstand the distance between us.

“Fast forward four years and Emma and I were stronger than ever. I thank our strong commitment to each other and really effective communication. I was set to move back down to D.C. to work with and help grow the family business. We started looking for apartments together and finally signed a lease together. They say you don’t know someone until you live with them and I think that is very much the case. Luckily for us, it only affirmed what I think we both already knew.

“I wanted my proposal to Emma to be really unexpected. I knew she knew it was coming but I wanted the ‘when’ to be a surprise. To distract Emma from the possibility of a proposal, we started to look for a home to buy. We fell in love with D.C. as a city and knew we’d like to be here for the foreseeable future. We found a place, made an offer and got it! We also booked a vacation for her spring break (she is a preschool teacher) conveniently timed right after my planned proposal. All of this led her to believe that a proposal, and the funds necessary to pull it off (aka a ring), were not there.

“As far as the proposal planning process, I am not a creative person, but that’s where Flytographer and our photographer, Hannah, came into play. I knew I wanted to pop the question on our five-year anniversary, which conveniently timed up with the National Cherry Blossom Festival on the Tidal Basin. This posed some logistical issues. For one, peak bloom is completely dependent on the climate. Some years, there are no blooms at all on our anniversary date. Secondly, the cherry blossom festival attracts thousands of tourists every year. How were we going to capture and photograph an intimate moment among thousands of strangers? Finally, is the weather going to hold up?

“In short, there were tons of moving parts to this plan. The good news is that I had full confidence in the Flytographer team and Hannah that, regardless of the conditions, we were going to make this thing memorable. The day of the proposal yielded perfect conditions: breezy, cool and overcast. I went to work that day, again not to warrant any suspicion, but came home a little bit early to celebrate our anniversary. I told Emma I had never been to the cherry blossom festival, which amazingly was true (probably the only truth I told her all day, lol).


“The plan was set into motion – we would ‘run into’ Hannah posing as a novice photographer trying to build her portfolio. We would agree to pose for a few pictures for her (this was the part I was most concerned about) and then she would lead us to a more secluded area. She directed us into a few poses and then had us go back to back, which was my cue. When Emma turned around, I went down on one knee. Then, Hannah directed us to turn around to face each other and BOOM! There I was.


“Emma instantly welled up with tears and did a full airborne 360. She was a ballerina for most of her life, so she is quite graceful with her movements. I gave a little speech, which I had rehearsed (funny thing is Emma made me repeat the speech after the proposal. Apparently, in her shock, she lost the ability to hear) and asked her to marry me. She said YES!


“It was such a surreal moment – a perfect combination of happiness and, honestly, relief. I had planned this proposal months out and had held it so close to the vest, it went PERFECTLY! Hannah captured the moment so well and her pictures make it look like we are the only people around. She did an amazing job! We love these pictures so much because the emotions are so genuine and they showcase the beauty of the city we have fallen in love with and call home.” – Ned

Congratulations, Ned and Emma! We wish you a lifetime of happiness!