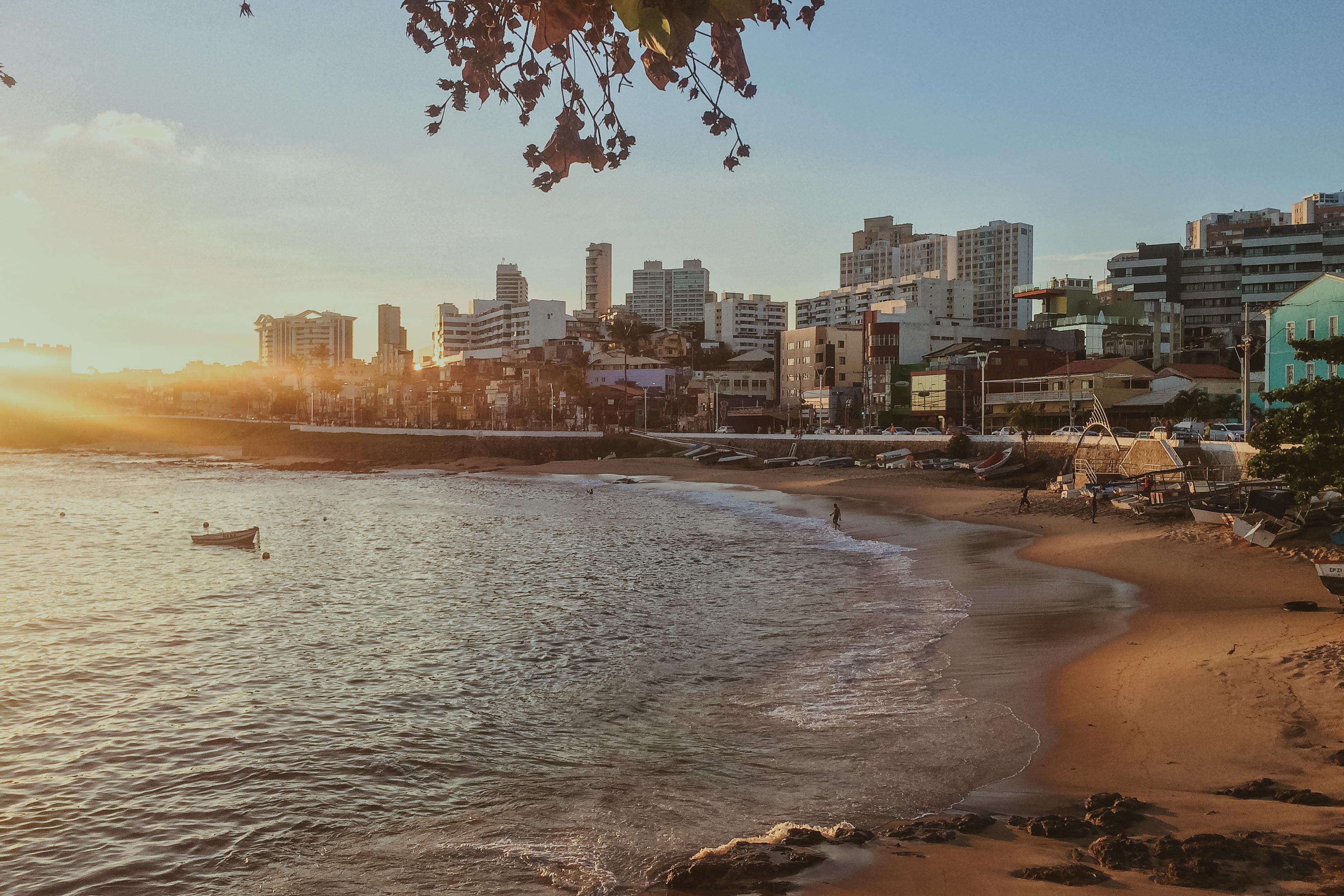 We’re always on the hunt for new places to explore, faraway cities to add to our next travel itinerary. And as we creep up on summer vacation plans, now couldn’t be a better time to preview five new cities we’ve added to our roster of 275-plus destinations worldwide.

These are places you may have heard of, but maybe haven’t investigated: an ancient town in Italy carved out of rock, a vibrant pastel-coloured city tucked away on one of Brazil’s most beautiful beach-covered peninsulas—the hardest part will be choosing which one to visit first. 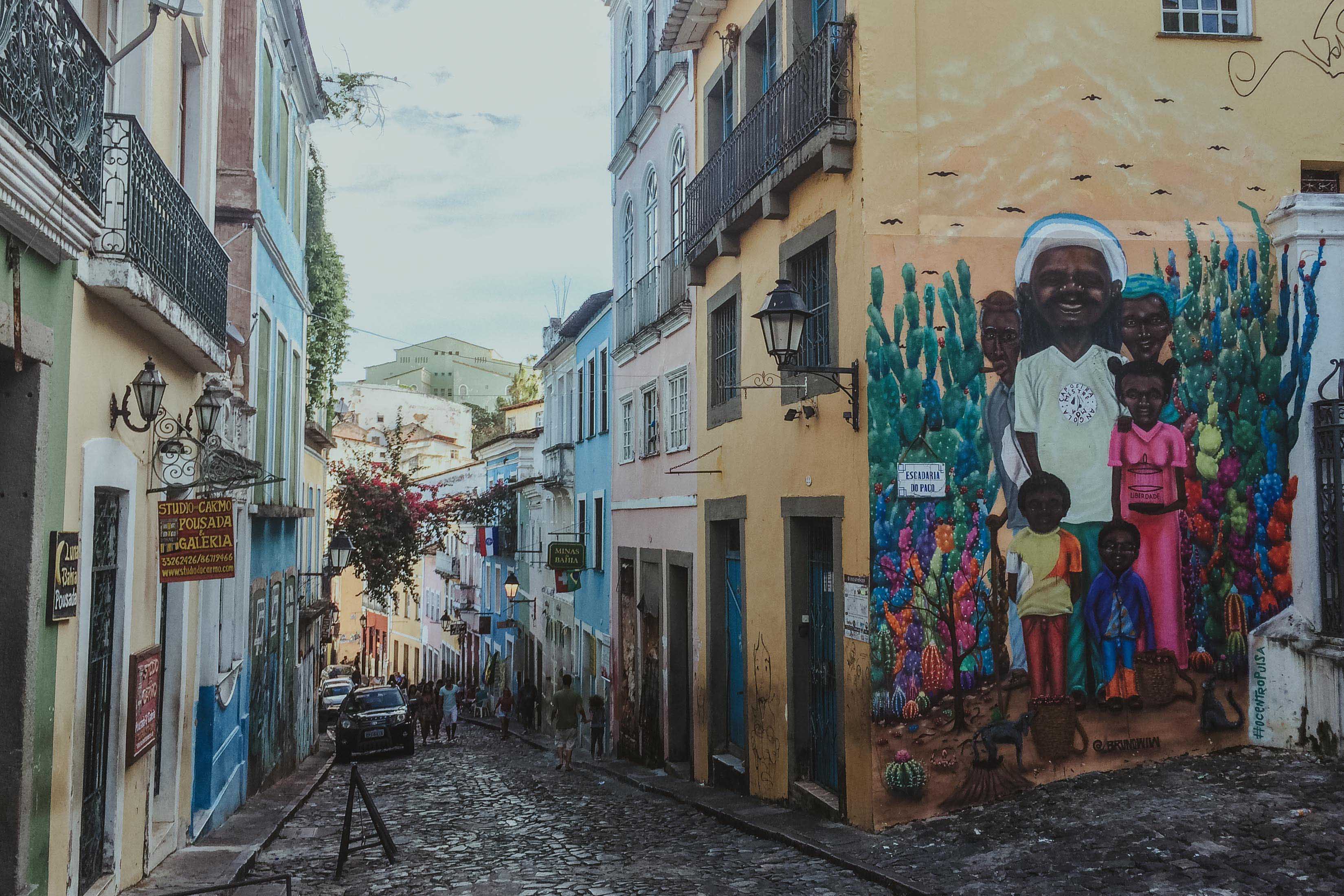 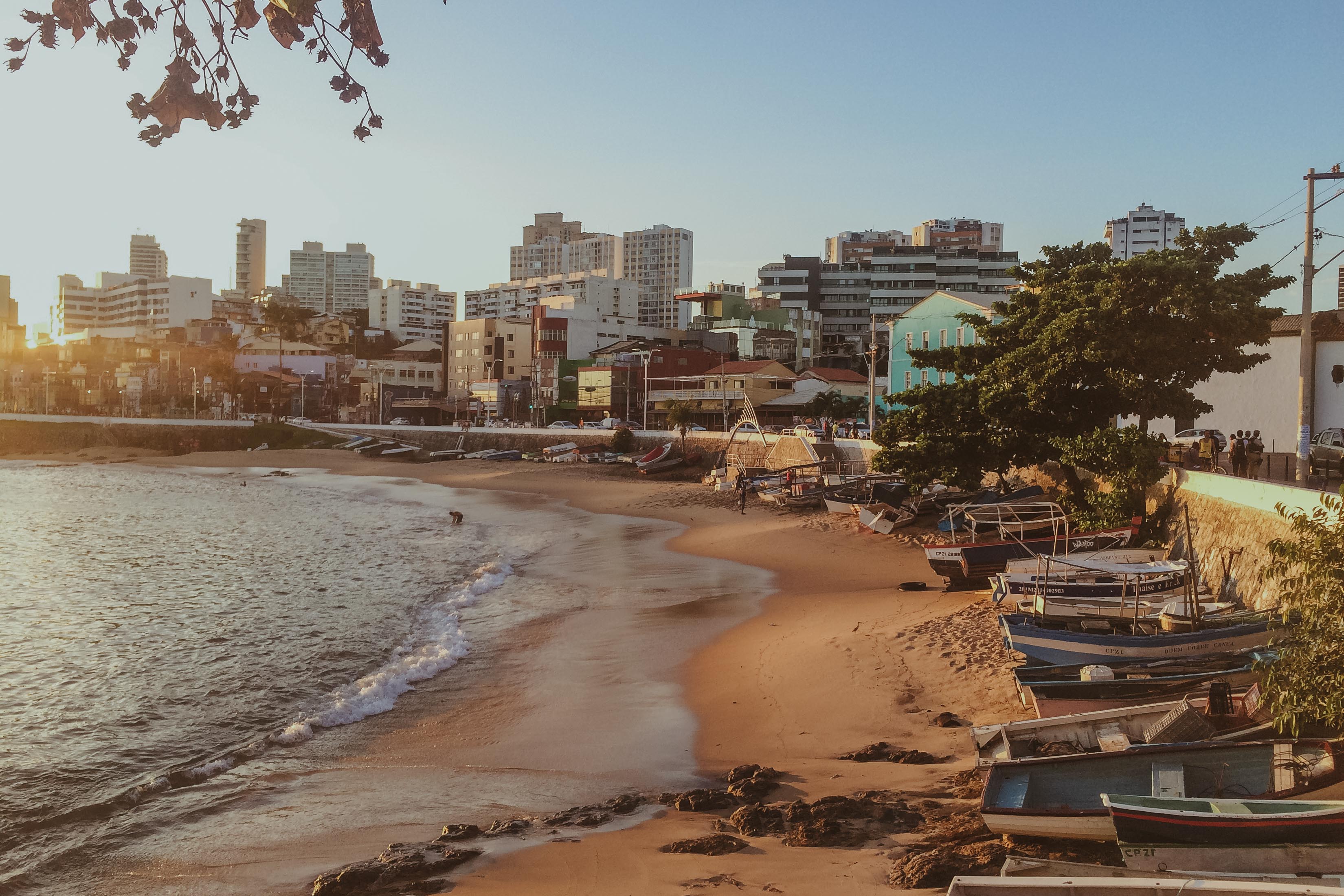 The iconic visual markings of Salvador are surely its colourful Portuguese colonial architecture and its waterfront, peninsula location. The Bahia state capital is actually split into two main steps, upper city and lower city, with a monumental elevator connecting the two that’s a tourist attraction in itself. The art deco-designed Elevador Lacerda is 236 feet high (72 metres) and dates back to the late 1800s. In upper town, is where you’ll find the rainbow-coloured colonial manors and Baroque churches of the Pelourinho district. Here you can walk around and take in the city centre’s sights and the sounds—there’s always something going on, from festivals to musical performances (every Tuesday outdoor samba parties start at 8 p.m., and everyone is invited). Salvador is a hub for Afro-Brazilian culture, so you’ll often see capoeira performances in the street, which looks like dance fighting, and visitors can (and should) sample local Bahian delicacies like moqueca fish stew, and the fried-bean and shrimp dish known as acaraje. Salvador’s weather is as hot as the food, so make sure you head to one of the city’s many local beaches to cool off in the turquoise waters. 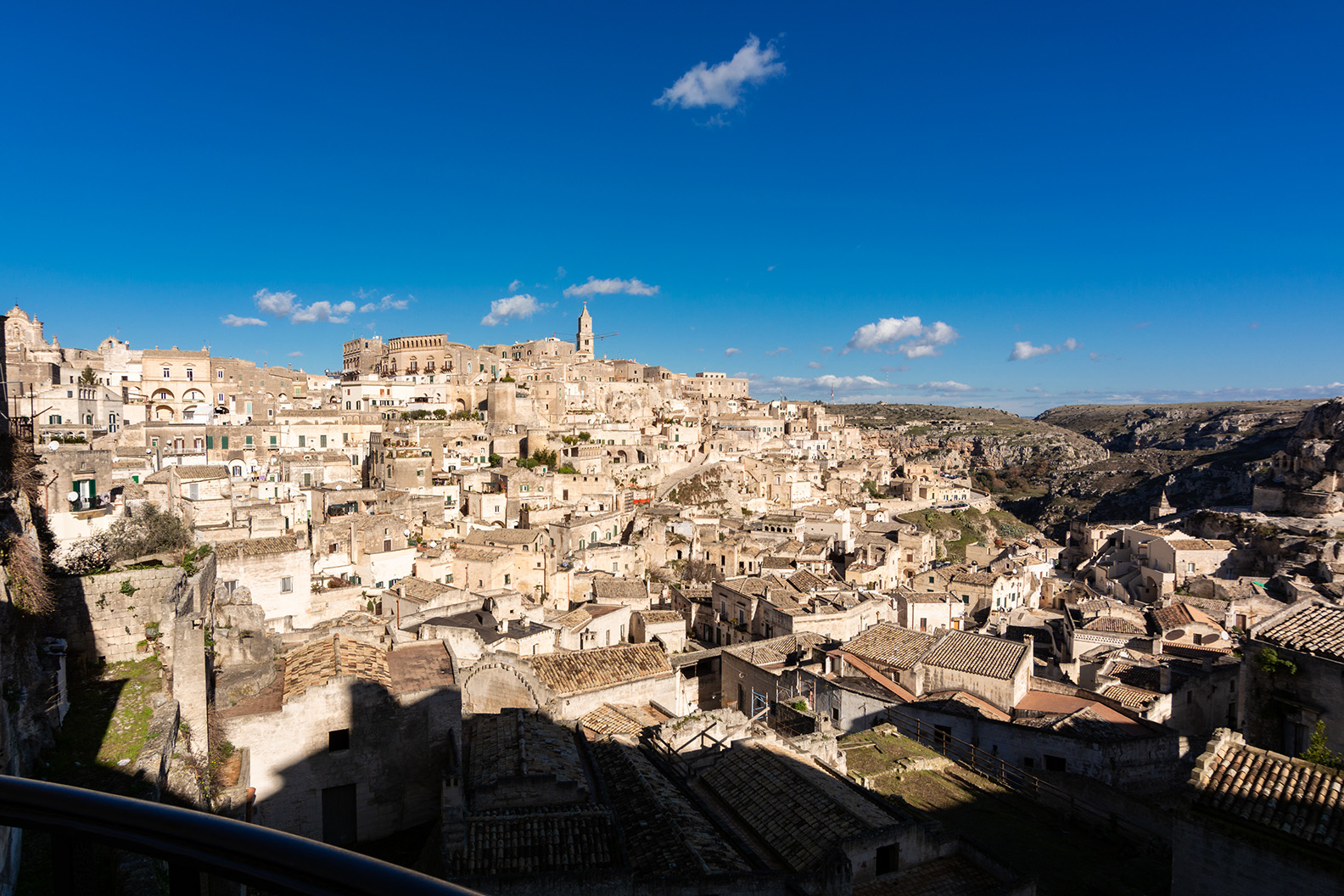 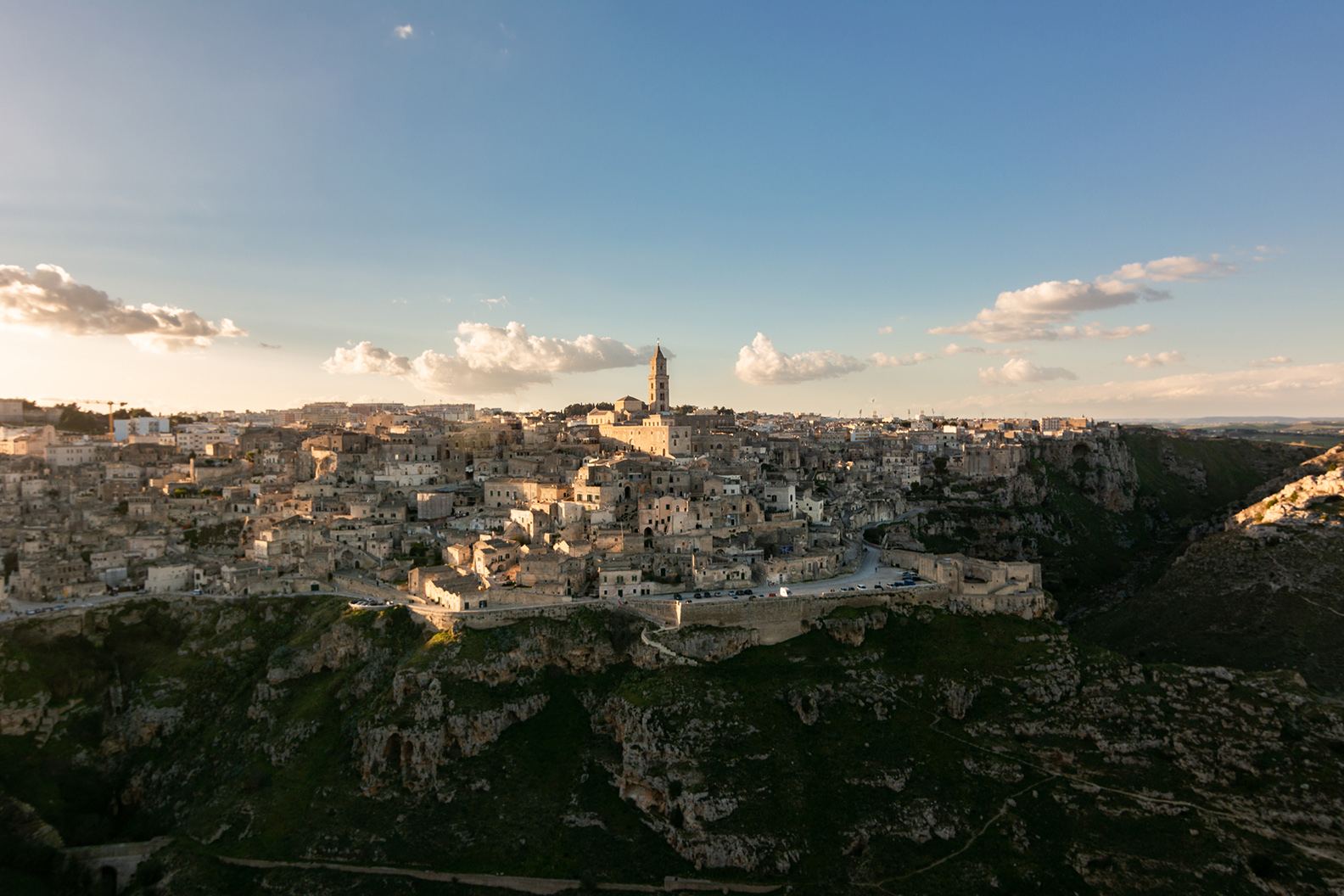 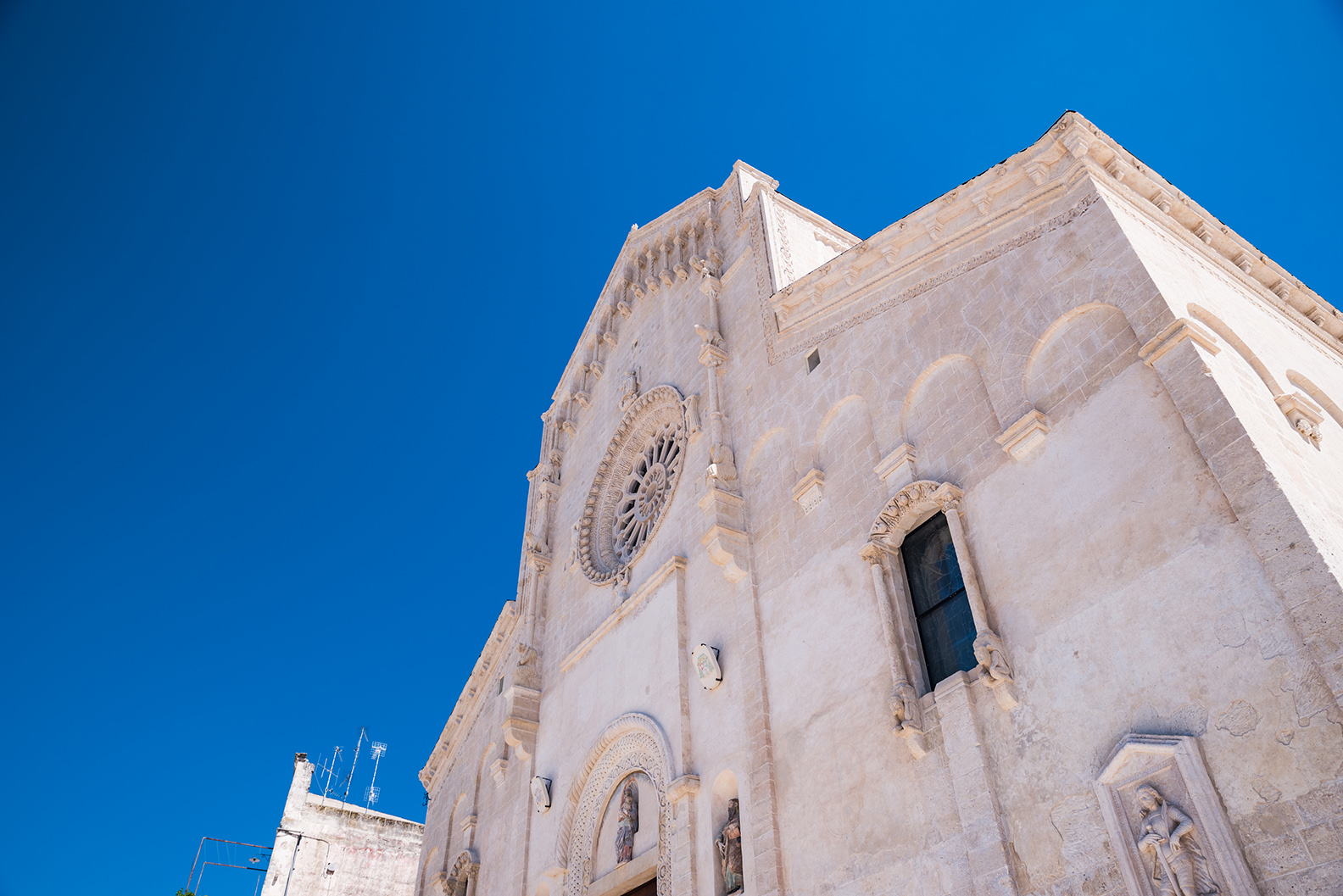 The city of Matera is like a window into the world’s ancient past. The city’s oldest area, the Sassi, is an intricate network of caves and buildings carved out of the rocky mountainside. People have lived here for more than 7,000 years, but in the 1950s this area was a locus of such poverty—with poor people living alongside their animals in the caves—that everyone was moved out and relocated in the developing modern city. The situation in Sassi was known as “Italy’s Shame,” but today, much of the area has been restored and rehabilitated with boutiques and restaurants. You should start your sightseeing at Casa Noha, which is a historic tufa limestone Sassi house that’s been restored and turned into a multimedia exhibit that introduces the history of Matera. Then you can explore the restored sections of caves and buildings on foot, including the Chiesa San Pietro Barisano, a church carved into the rock, and Palombaro Lungo. Palombaro Lungo is a massive underground cistern that used to hold all of Matera’s water supply. It’s carved into the rock and you can walk through along bridge-like pathways under the arched rock of an ancient city—it’s something you won’t see anywhere else. 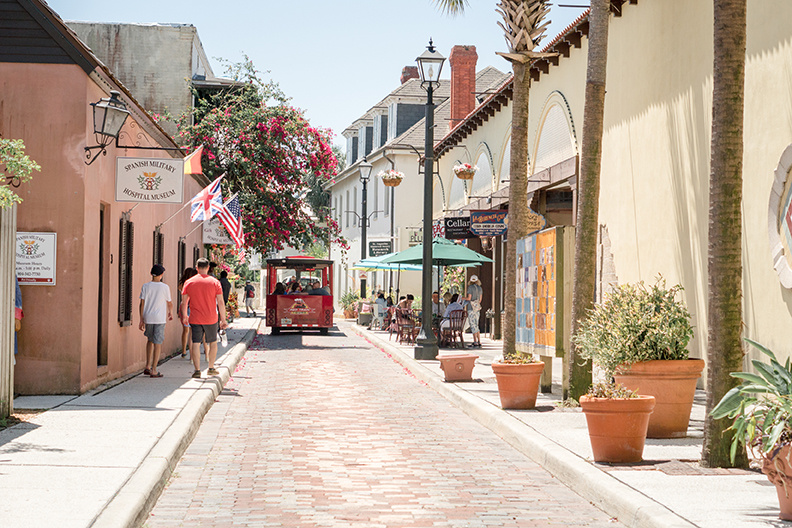 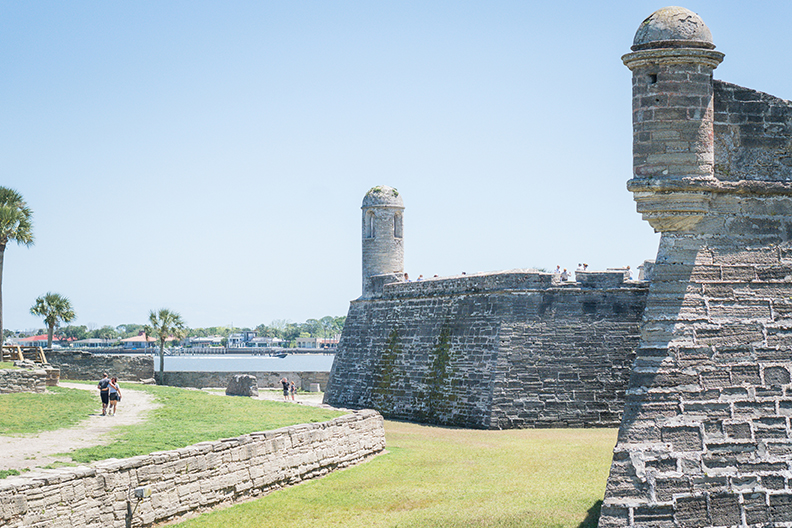 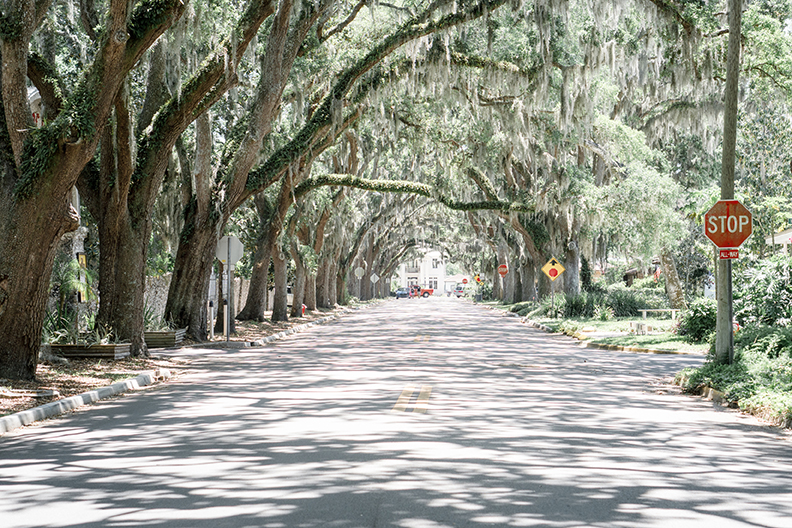 As the oldest European-established city in the continental U.S., St. Augustine is bound to have some stories. After several attempts to settle Florida, the Spanish finally did it here in St. Augustine in the 1500s, and its 17th-century Castillo de San Marcos fortress (with drawbridges) has faced battles ever since. Relations with the local Native Americans were expectedly fraught, and the city’s fort was once set on fire with flaming arrows. In 1586 an English privateer stormed the area with 2,000 men to steal and break things before returning home. English buccaneers did some ransacking in 1655, and states Carolina and Georgia, and unaffiliated militia men, respectively, all made separate attacks on the town between 1702 and 1812. Needless to say, St. Augustine is not your typical Florida town. There is an alligator farm, yes, but also so much history (from old jails to ancient forts to 1800s-hotel museums), and white sand beaches that stretch as far as your eyes can see. Find beaches, wildlife sightings and Florida hammock forests at Anastasia State Park—you can camp here too—and cap off your stay with a visit to the award-winning St. Augustine Distillery, the town’s first legal distillery since prohibition. 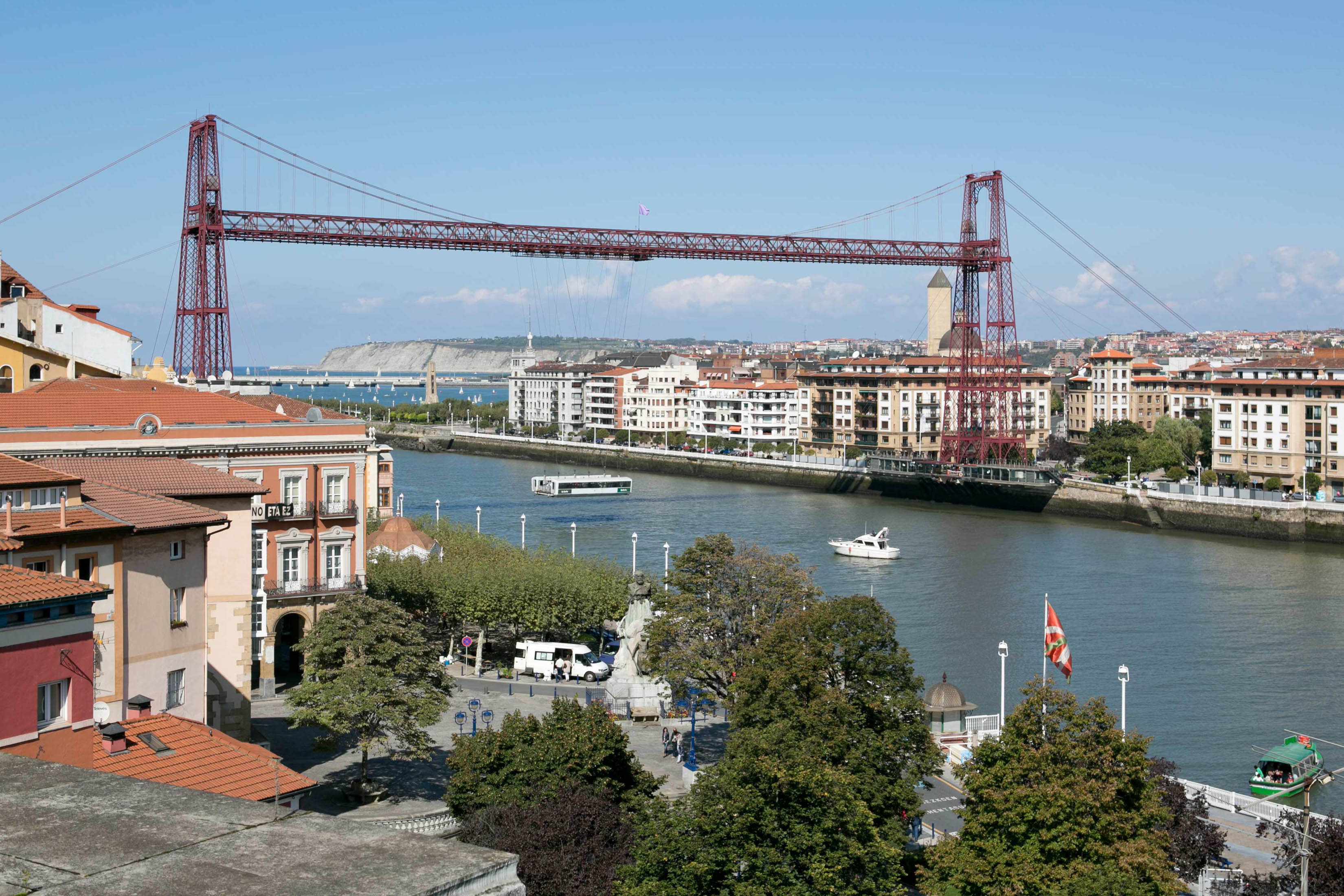 This historic port town in northern Spain’s Basque country is a city that marries old and new, where ancient ruins and historic structures live on next to modern museums and avant-garde architecture. Bilbao, which is Spain’s fourth-largest city, sits just south the Bay of Biscay, but because it’s between two mountain ranges it runs a little cooler than nearby surf town San Sebastian. It was historically the second-most industrialized city, next to Barcelona, and it shares a few other similarities as well. Bilbao’s circa-1915 Artxanda Funicular is one of its best attractions, taking visitors high up into the mountains for a panoramic view of the whole city at the Artxanda viewpoint. Another iconic feature of Bilbao is the estuary and river that flows through the city. Boating up the Ria de Bilbao is a fantastic way to explore the city, or you can walk along the riverside paths and see some of its main attractions, including the Guggenheim Museum and the Ribera Market. The Frank Gehry-designed Guggenheim in all its twisted-silver-ribbon glory is an icon for this artsy and modern new phase of Bilbao, and a must-visit (featuring artists like Anselm Kiefer and locals Jorge Oteiza and Eduardo Chillida). The 10,000-square-foot Ribera Market, located next to the Bilbao river estuary, has won a Guinness world record for its bevy of food offerings, so it’s a foodie’s delight to browse and sample. Other main draws for Bilbao: Casco Viejo is the city’s old town district. Here, narrow pedestrian-only streets with colourful buildings and sidewalk cafés dominate, and you’ll find a hefty amount of hip bars and restaurants, especially at historic area’s big 19th-century square, Plaza Nueva. 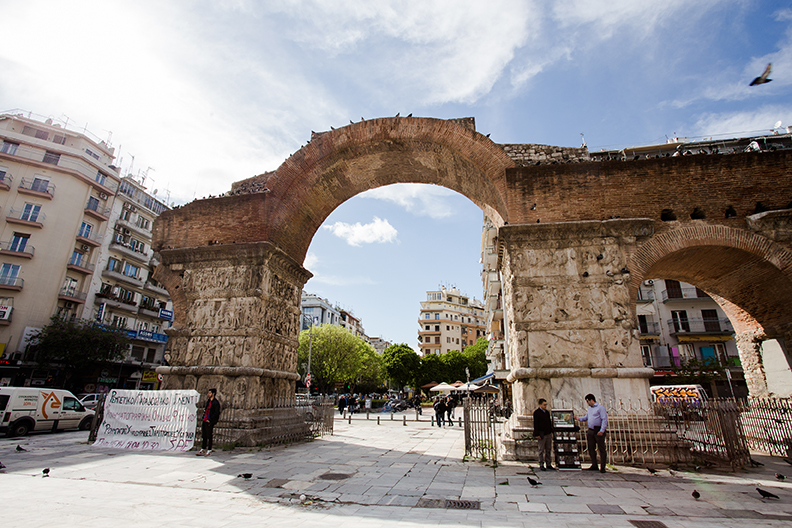 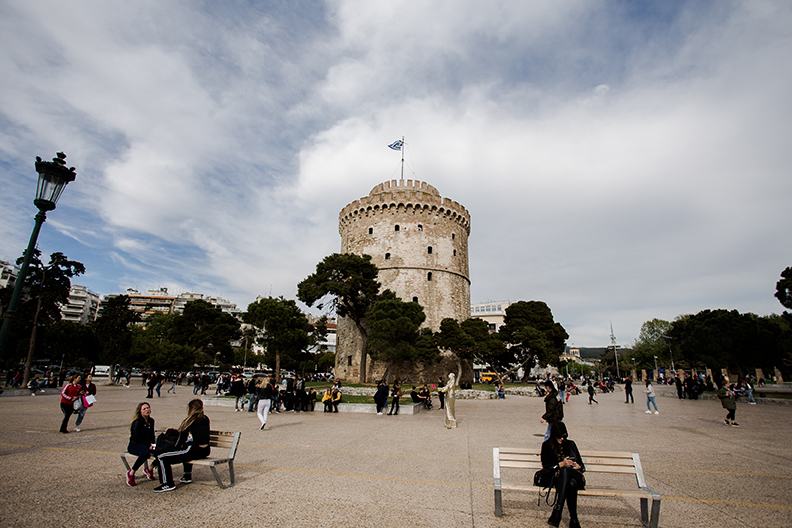 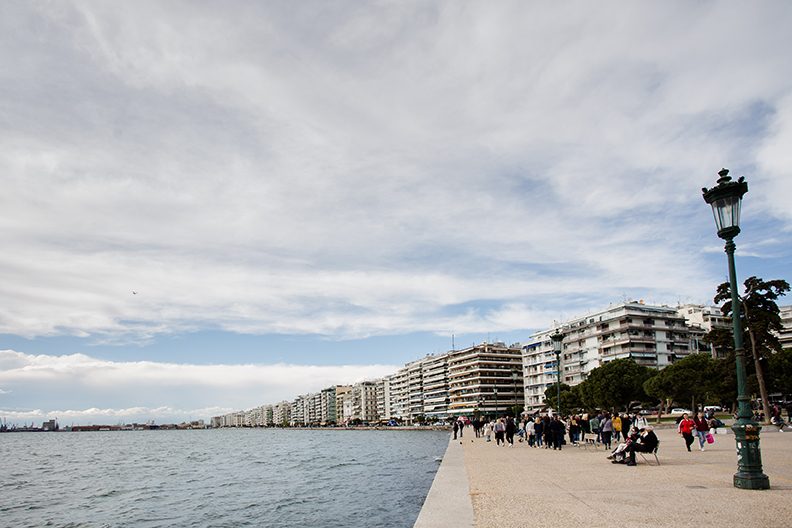 You won’t find white cave houses and blue domed roofs, but Thessaloniki is a Greek gem with its own unique treasures. It’s a port city that’s held court on the northeast coast of mainland Greece since 316 B.C. Well, sort of, as the city burned down in 1917 (leaving about 70,000 people homeless) and was rebuilt in the 1920s. And what sprung up are streets filled with colourful neoclassical buildings next to modern shops and bustling main squares that sit right on the waterfront (Platia Elefterias and Platia Aristotelous). There are a few notable ruins, like the Ruins of Vergina, which hold Alexander the Great’s father’s tomb, and also the symbol of the city, the White Tower. Easily spotted by its squat, turret-like shape, the 15th-century building and former prison and fortress is now a city museum open to the public. But these notes are ancient history, the Thessaloniki of today is a vibrant and youthful mecca for the fashionable and hipster set. It’s second in size only to Athens and it’s such a perfect respite for travellers who want a little bit of everything. Your eating-as-entertainment options are varied and ample: taverns (or “ouzeries”), bakeries, family-run sidewalk cafes, high-end bars, world-class restaurants are everywhere you look, and so is this energy, a college-town freshness not typically experienced in well-patina-ed Europe. You’re going to love it. 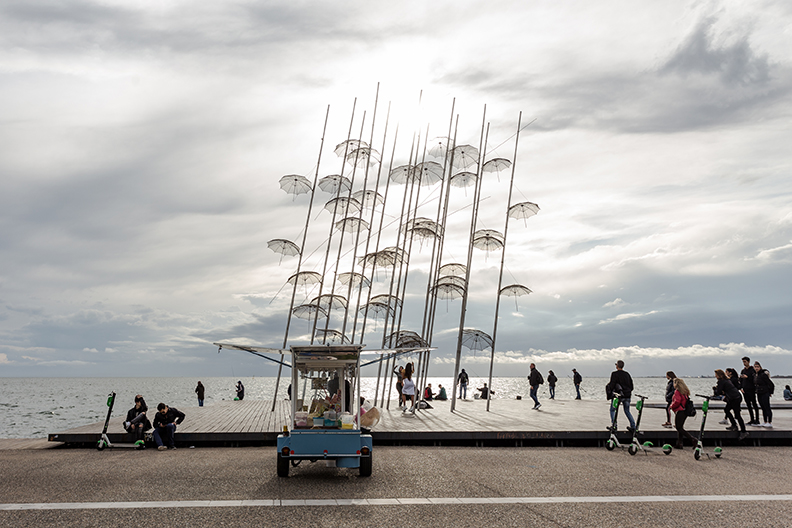 The city on Greece's mainland is a hub for arts and culture. (Photo: Flytographers Stathis and Christina in Thessaloniki)
VIEW DESTINATIONS

Tuscany Photo Spots With rolling hills, lines of cypress trees, stunning villas, and vibrant sunsets — Tuscany is one of...