20 Proposals Guaranteed to Make You Cry 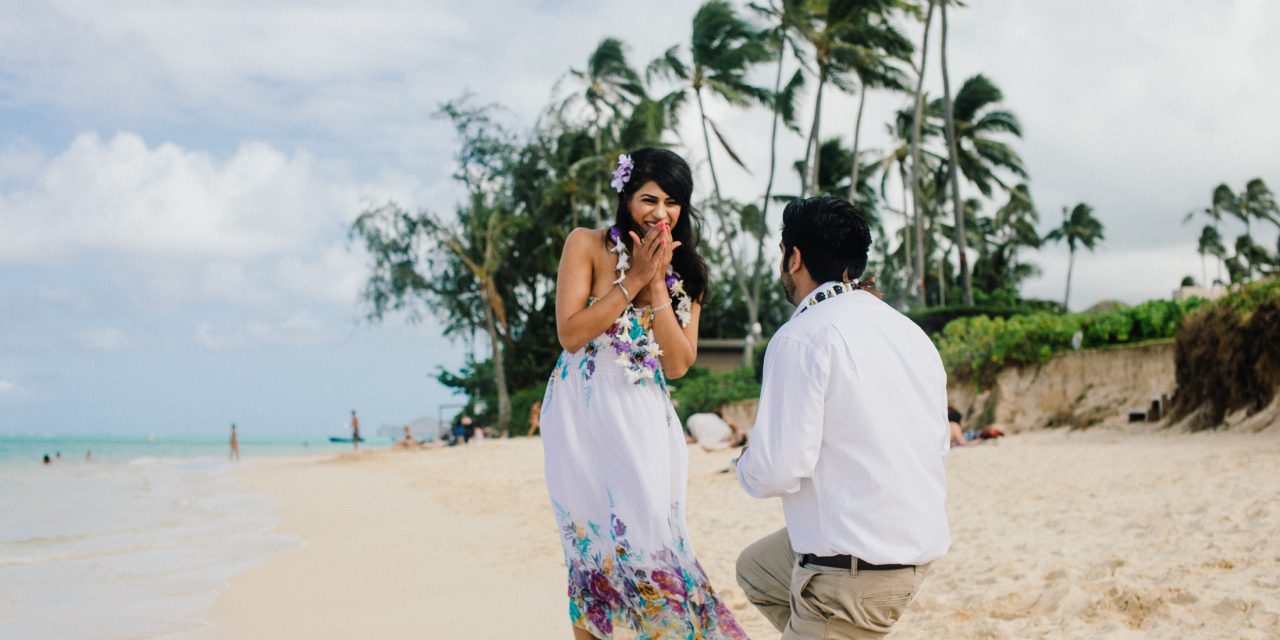 Grab your tissues and get ready to bawl over these beautiful proposals from around the world.

“I had the idea of proposing on a gondola in the canals of Venice since I was 18, but I just hadn’t found the right woman yet. Fast forward a couple of years and I met the woman of my dreams! EVERYTHING just seemed to fit with us; every single thing kept proving to me that this was meant to be and that she is my soulmate.” – Nihal
Read their proposal story

“We went to high school together and were friends then, but never really had that ‘spark’ that could lead to something more. After losing touch for 6 years, I remember when I saw Malorie again – I was instantly blown away. All those feelings of friendship rushed over me again –  and, not to mention, she was absolutely stunning! Malorie and I hung out more and more and it was apparent she was the one for me.” – Blake
Read their proposal story

3. A Super Sweet Proposal in Brooklyn

“We had previously talked about having children and marriage, and now that we were starting to settle down, we really wanted to start a family. I knew the next step was to propose. Brandon always ‘joked’ that we had to be married before we had kids. I always laughed it off to make him think I really wasn’t thinking about it. All along, I had been planning to marry him.” – Aaron
Read their full story

4. Proposing in Front of an Ancestral Statue in Edinburgh to Honour his Late Father

“Originally I had planned to go to Scotland to visit the home of my ancestors with my father, who is a direct descendant of poet Sir Walter Scott. Very sadly, my dad passed away before we could go. I proposed to Natalie in front of the Sir Walter Scott memorial as a way of including my dad in this moment, even though he couldn’t be there to see it.” – Mack
Read their full story

5. Returning to the City Where They Fell in Love

“Shortly after Tori and I had started dating, we went on a trip to San Francisco. It was there that I remember really falling hard for Tori and found out later that she had felt the same way. Because this place was so special to us, I knew I had to do the proposal there.” – Mckenzie
Read their full story

6. Overwhelmed by the Moment In Prague

“As we approached the edge of the beach with the Vltava River and Charles Bridge in the backdrop, I faced Natalie, held her hand and recalled all of the wonderful memories I’ve had with her in the 3 years since we’ve met.” – Paolo
Read their full story

7. When They Kept Accidentally Meeting Again and Again

“When I first met him, I knew there was something I liked about him and when we started dating, I knew he was the one – but I had absolutely no idea he had any plans to propose! When it happened, it couldn’t have been more perfect.” – Narissa
Read their full story

“We met in university when Faith came to my school on a year-long exchange. As cheesy as it sounds, it was love at first sight. We both had a feeling we were going to love each other immensely, but found it difficult to act on our feelings simply because Faith had to return to the UK. After thinking about it for days and speaking to friends and family, I thought that it was worth giving it a try than letting her go and regretting it.” – Kojo
Read their full story 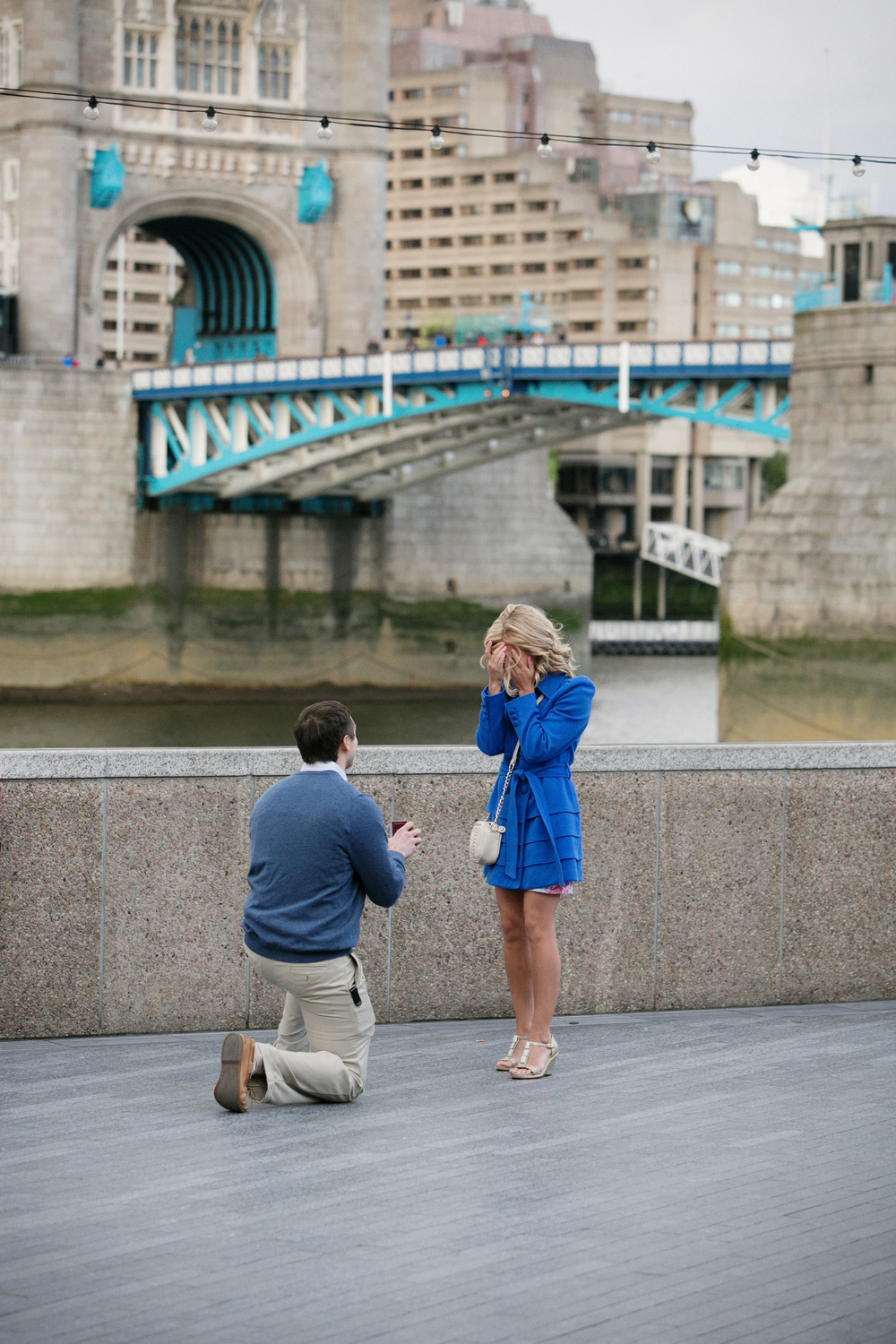 9. He Blew Her Mind With THESE Proposal Photos Months Later at Engagement Party

“Kevin pulled the ring box out of his pocket and asked me to marry him. I tried to get some kind of words out of my mouth but I just couldn’t, so I just continued to cry and nod my head a lot! After he slid the ring on my finger and I calmed down a bit, I officially said ‘yes.'” – Katie
Read their full story 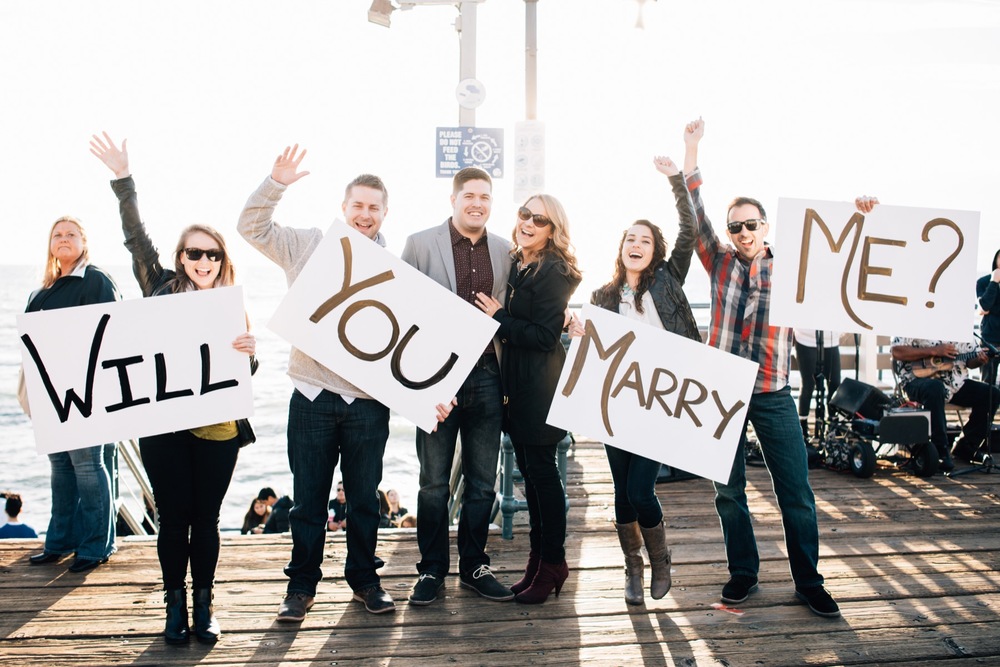 10. Friends Fly Out to Pop the Question Together

“After a minute or so, we started to walk up the stairs. Tommy said to me, ‘You know Laura, I want to spend the rest of my life with you…’ As he was saying this to me, we had reached the top of the stairs, and then everything happened in a matter of seconds.” – Laura
Read their full story

“I can still remember the exact moment I first laid eyes on Bruno. A group of my high school friends and I were standing in front of the town’s ice cream parlor drinking milkshakes and trying to meet boys from the other high schools. It was a warm August night. I remember looking at him, thinking, ‘This one is something special.’” – Bryannah
Read their full story 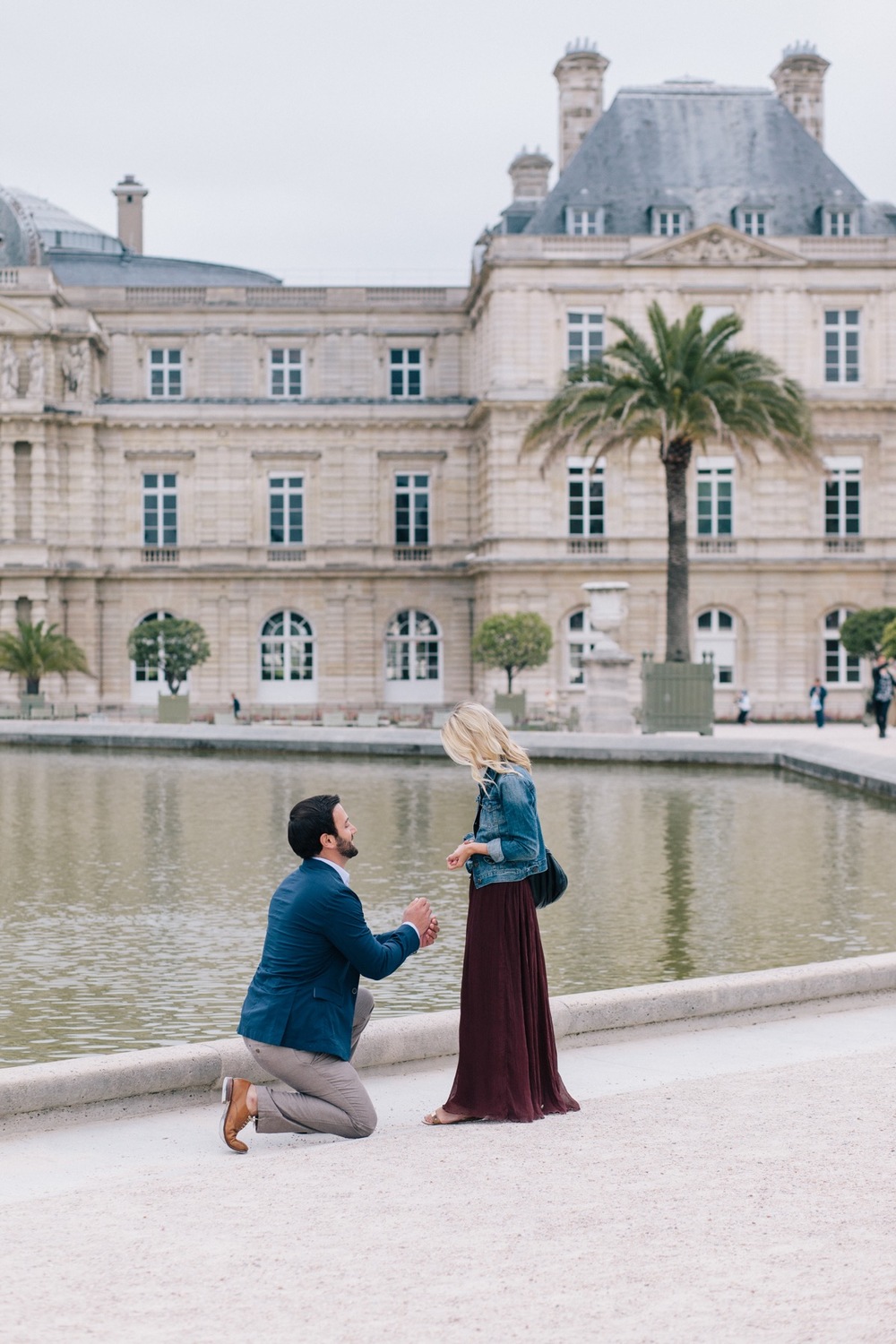 12. A Little “Beard Croissant” Didn’t Slow This Glamorous Proposal Down

“We meandered around for a bit and I started taking pictures while Dani ate his croissant. He then came over and asked me to put my coffee and camera down. I didn’t understand at first why he wanted me to do this and then I realized something was up! He proceeded to get down on one knee and asked me to marry him.” – Ali
Read their full story

13. He Proposed With The Ring Her Late Father Gave Her Mother

“He continued to get down on one knee and he proposed with the same ring that my dad (who passed away when I was a baby) had given my mom over 35 years ago – from inside a box Jay had carved himself.” – Kelly
Read their full story 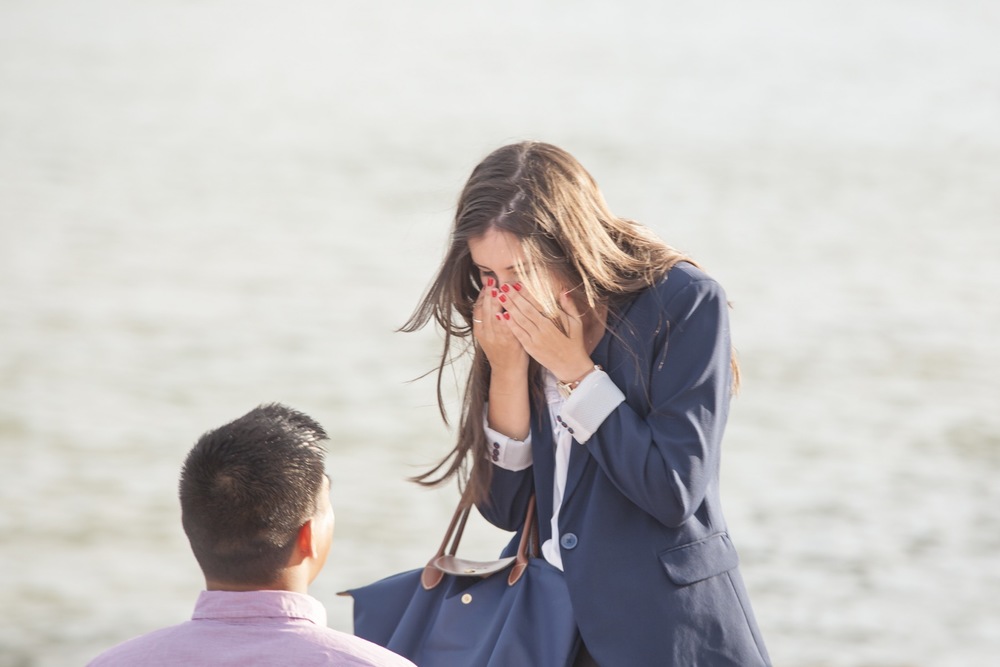 “While studying at the United States Military Academy at West Point, I was fortunate to study abroad in Coimbra, Portugal for a semester. The semester abroad experience had it all: travelling, festivals, concerts, networking with so many people across the globe, and soaking in the culture. The experience was complete when I set my eyes on Filipa Lopes during a University Festival called Queima das Fitas. I call it fate.” – Rommel
Read their full story

15. Champagne Explosion With The Besties

“I was pale white and so nervous that she thought I was going to give her some bad news! But I told her how much I love her, how she changed my life and how she makes me want to be a better man, and that I wanted to spend my life with her. She still did not have a clue that I was going to kneel down and she said lots of romantic things back to me. She was saying ‘Thank you for bringing me here,’ and then I pulled myself together and just kneeled, popped out the ring and told her the magical words. She was so shocked she sat down with me without answering the question and she was laughing and crying at the same time.” – Resat
Read their full story

16. Totally Forgot His Speech Once He Looked In Her Eyes

“I pulled away from Lynds and dropped to one knee. She wasn’t sure how to react, asking over and over ‘Is this real?’ When I started speaking, Lynds’ mind started to grasp what was going on. Simultaneously, my mind stopped knowing what was going on. My pre-planned speech went out the window, along with the confidence I had exhibited earlier in the night.” – Hayden
Read their full story

17. He Was So Nervous, The Ring Box Faced Backwards

“I had everything planned out: the photographer, the location, what I was going to say, everything. I even had a custom lock made with our names on it and the date of the proposal to put on the bridge. But when the big moment came, I was so nervous and flustered that I ended up proposing with the ring box facing the wrong way!” – Alex
Read their full story

19. A Book From Their First Date Seals This Sweet Cherry Blossom Proposal

“When we got there, he told me he had something to give me and handed me a book – the same book I had given him when we first started dating! When he handed it to me, I was confused, until he flipped it to the last page where he had written something. I started to read it and immediately knew where it was headed. When I finished reading the last sentence, he got down on one knee and asked me to marry him.” – Mariam
Read their full story

20. Golden Hour Glow. Heartwarming Words. Just Try NOT Melting Over This One

“As we were walking down the boardwalk path, I thought it was strange we were going that way as we had just been dropped off closer to the pier, but again, didn’t think too much of it. We paused to take a selfie with the pier and sunset in the background. As I was putting my phone away, Tim said, ‘Before we go to the pier, there’s one more thing I want you to have.'” – Lauren
Read their full story

Ready to make your own proposal history? Get the story started by choosing the perfect backdrop in one of our 175 cities around the world.