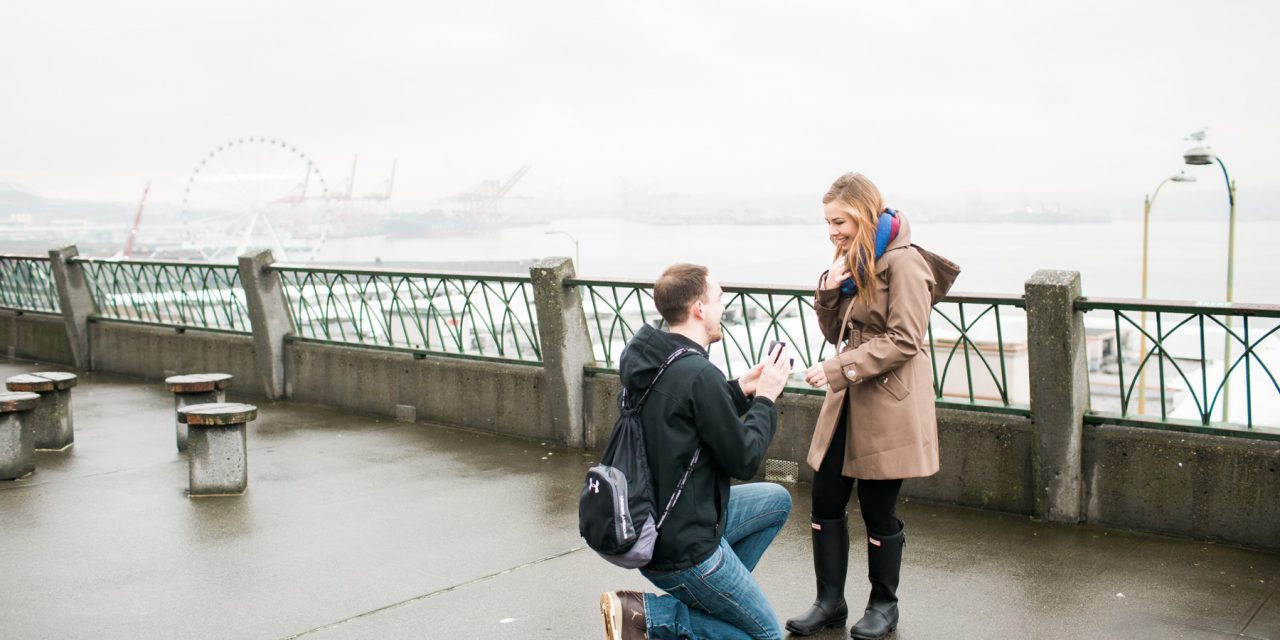 Taking his girlfriend on a post-Christmas getaway to the west coast, Ben decided it was the perfect time to surprise his love with a proposal. Getting down on one knee in the heart of Seattle at Pike Street Market, Flytographer Kelly captured the moment that Kate said “Yes!”

Ben: “We met three years ago in college at the University of Wisconsin in Stevens Point. We instantly became friends, and started dating a year and half ago. We now both work for the same educational software company in Stevens Point, WI. She’s a marketing specialist writing content and I’m a product owner for our business suite. In her spare time, Kate writes and inspires others through her fashion blog at thefashionspeech.com.”

Ben: “Ever since we became friends (and especially after we started dating), I knew Kate was ‘the one.’ Everything about us just clicked. So, this past July, when I was miles away from home for work, I found the perfect ring. But before I spent thousands on it, I first needed to make sure she would LOVE it. I designed a special ‘test’ for her: I asked her to rate ten different rings (one of them being the one I was about to buy). She rated the ring I was about to purchase a 10 out of 10, so I bought it instantly. I had the ring, but the next part was hard – now I had to really make the proposal special and a complete surprise!

“After lots of research, I decided that Seattle (a new world for both of us) was the best option for the proposal. Once we started planning our trip, we both agreed that Pike Place Market was simply a must-see. It was because of our mutual affection towards the Market that I knew that is where I wanted to propose. Next, I had to ask for her parents’ blessing. Then came telling a few select friends and family about my surprise plan. Now, I just had to keep it all a secret from Kate for a few months.

“Thankfully, I was able to keep it a secret. When I really started planning the details, however, I knew I needed a few more things for the perfect touch: we needed pictures, so she needed to get her nails done. I was able to book a massage and a manicure for her without her being suspicious. Since we were from out-of-state, I knew the hardest part would be getting a photographer.

“After much online research, I decided to go with Flytographer as they had the best reputation, reviews, website, and price. Once landing on Flytographer, I then chose to go with Kelly as I really was drawn to the client stories on her page. We flew in on a Sunday night, and the big day was Monday morning at 10:00 AM. I wasn’t all that nervous (maybe in part because I’d thought about this moment for months) – I would say I was more anxious than anything.

“The day of the big question went so well! I was able to lead Kate to the Market (a short walk from our hotel) a little bit ahead of time, and I looked around for the perfect spot to capture this moment. Even though the spot I chose that day wasn’t what was originally planned, Kelly was so adaptable in going with the flow. When I knelt on one knee and popped the question, Kate said ‘YES!’ Afterwards Kelly even gave us some pointers for navigating around the city. We loved the way Kelly worked with us, her photography skills, and the end result: our beautiful photos!

“Leading up to ‘the big day,’ Kate told me she had no clue about my plan and had no idea I’d even bought the ring! During the big moment she said that she didn’t know it was happening until I had peeled her gloves off and got down on one knee to ask her to marry me. She said that she had to calm herself down inside her head just to listen to what I was saying during the proposal. She really couldn’t believe that it was happening! She was beyond excited and completely joyous. She also really loved the way Kelly worked with us, was outgoing, and was so personable. Kate loves the photos too and was so happy with it all – including the fact that it all was a complete surprise!”

Looking to capture your proposal at home or abroad?