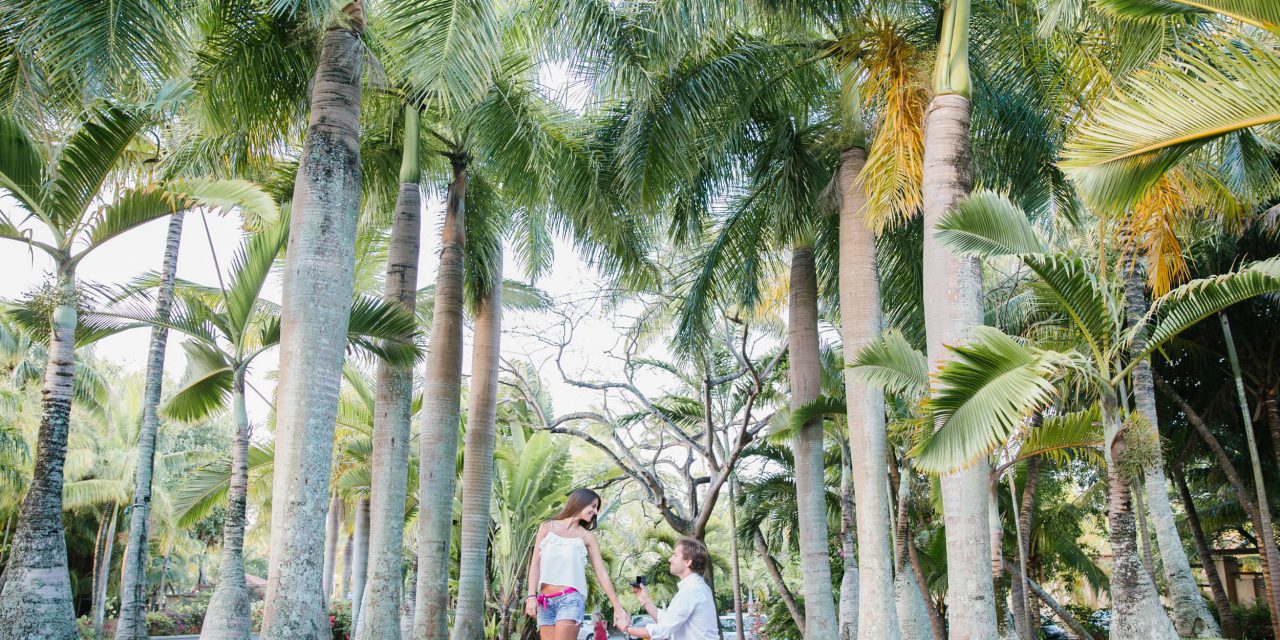 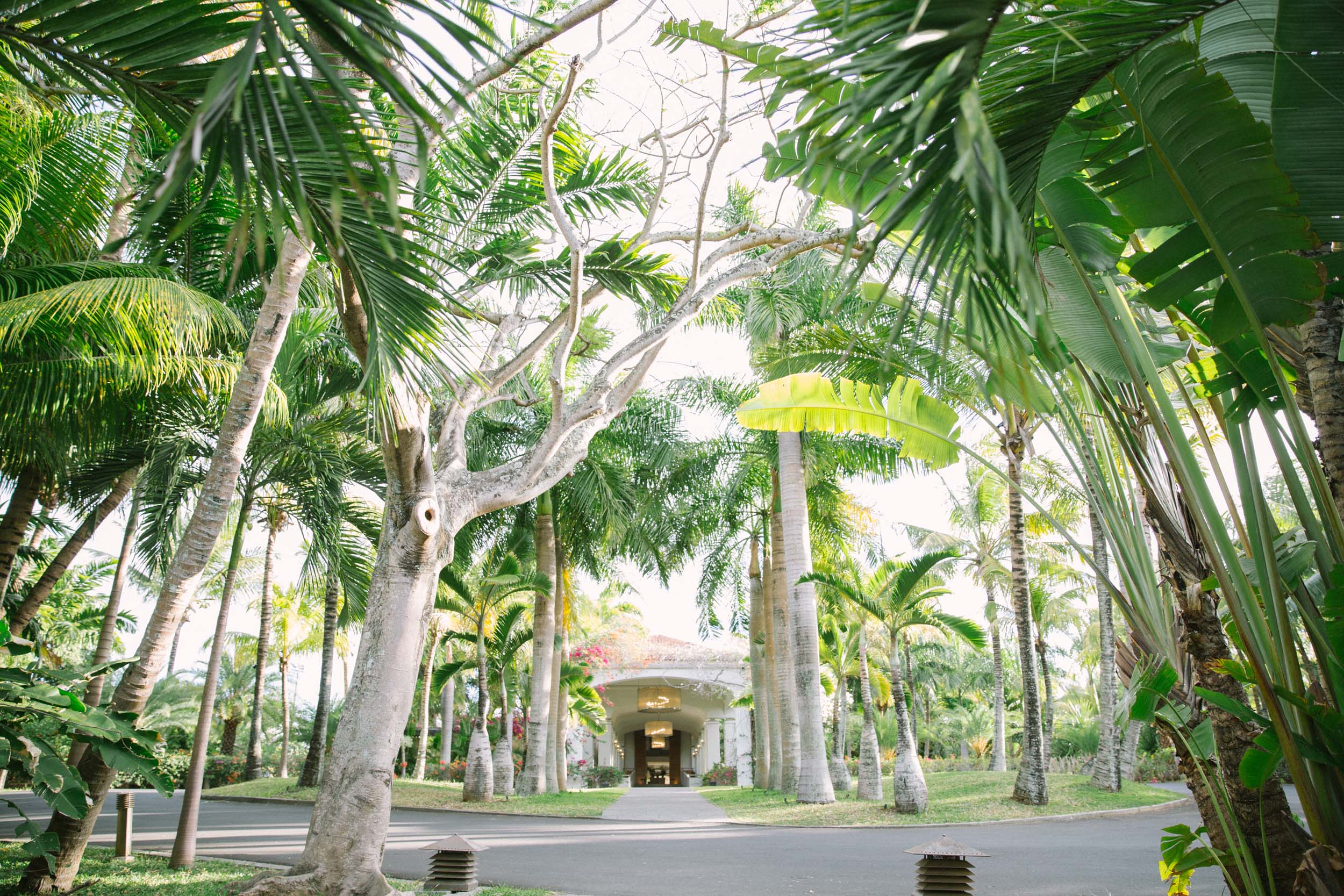 An exotic island location, a perfectly beautiful day complete with blue skies and sunshine, and green palm trees all around – it doesn’t get more romantic than that. Read on for more of the romantic details from this gorgeous Mauritius island proposal. 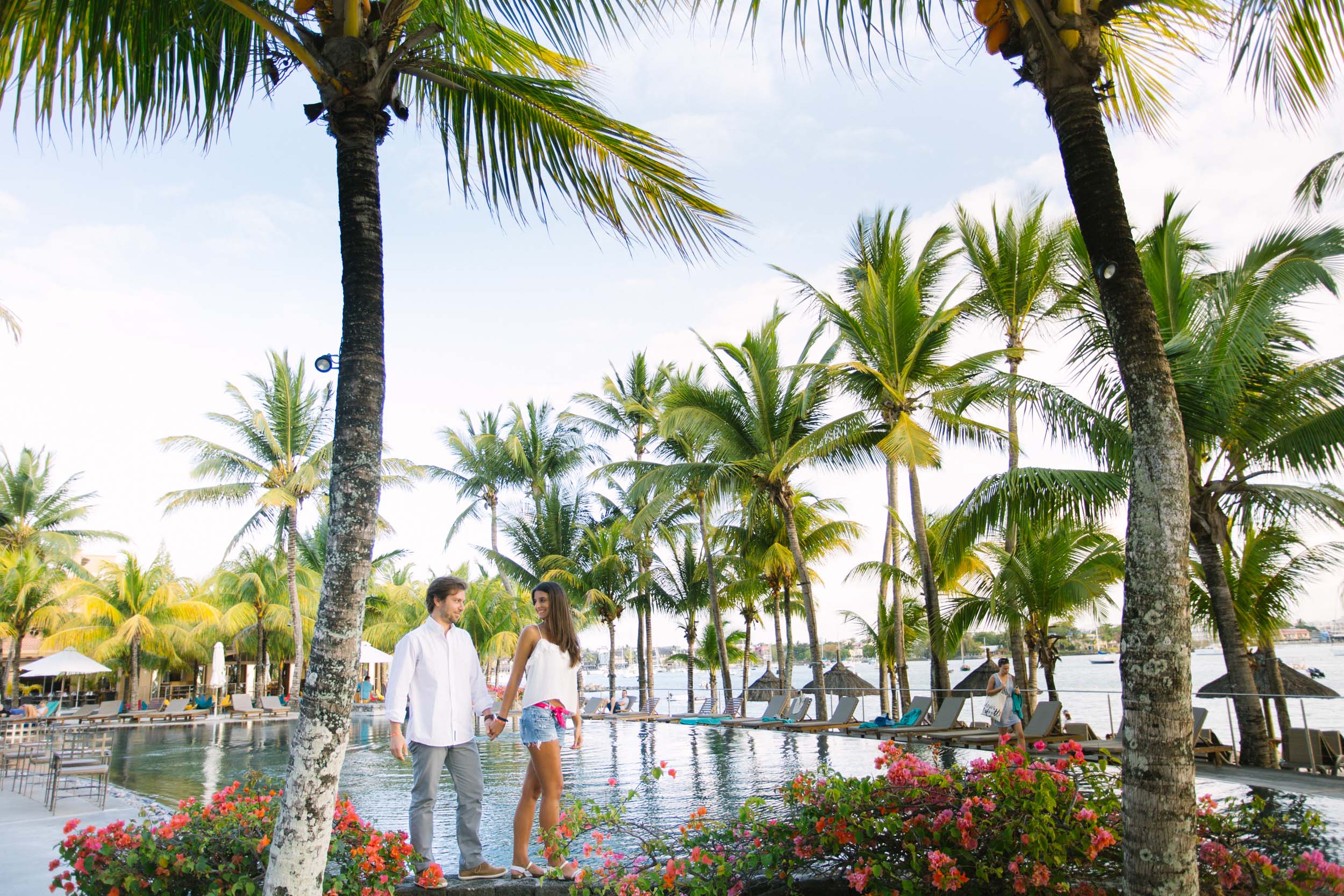 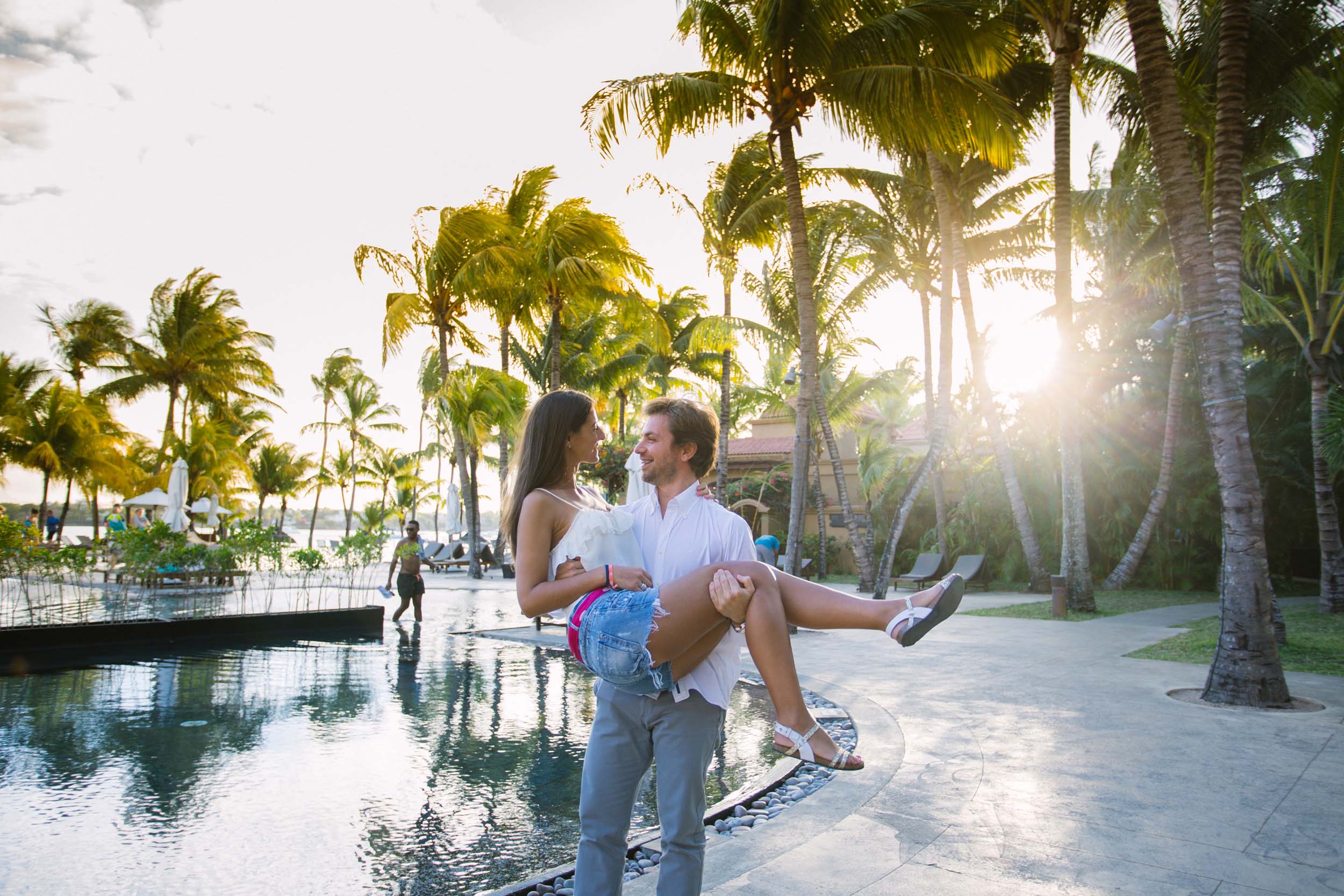 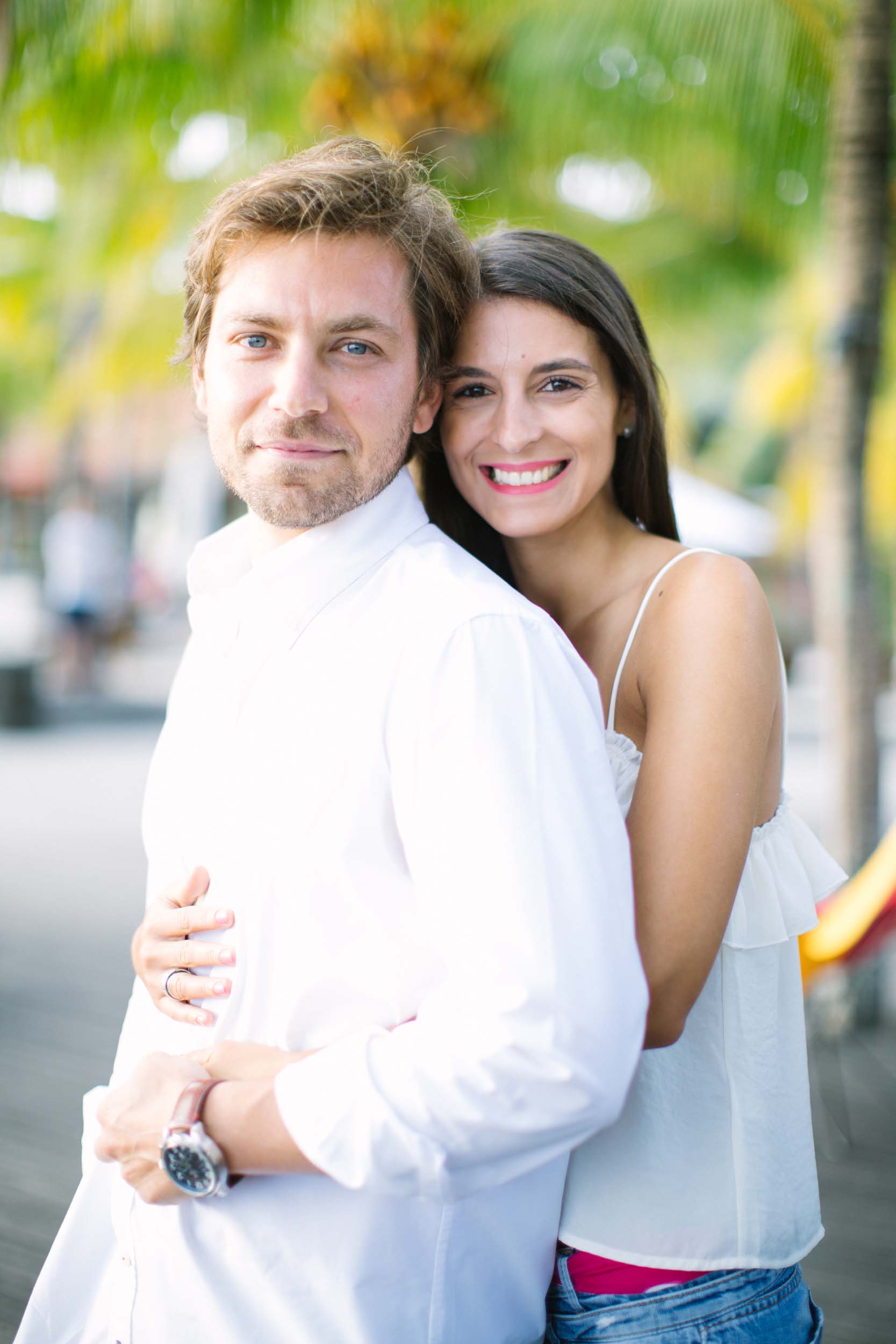 “We met five years ago on my first day of a new job. It was very early and I was really nervous about my first day and I remember seeing Celso arriving to work very happy and cheery, saying hello to everyone. He came up to me and said ‘Hello’ and I automatically thought he was my boss because they are a little similar, so i said ‘Good morning, Luís. I was waiting for you.’ He laughed and said, ‘I’m not Luís. My name is Celso.’ I turned red and apologized. Two years later, we were dating.” – Liliana

“We know each other from work! When we started dating, we shared Mon Cheri chocolates during work breaks!” – Celso 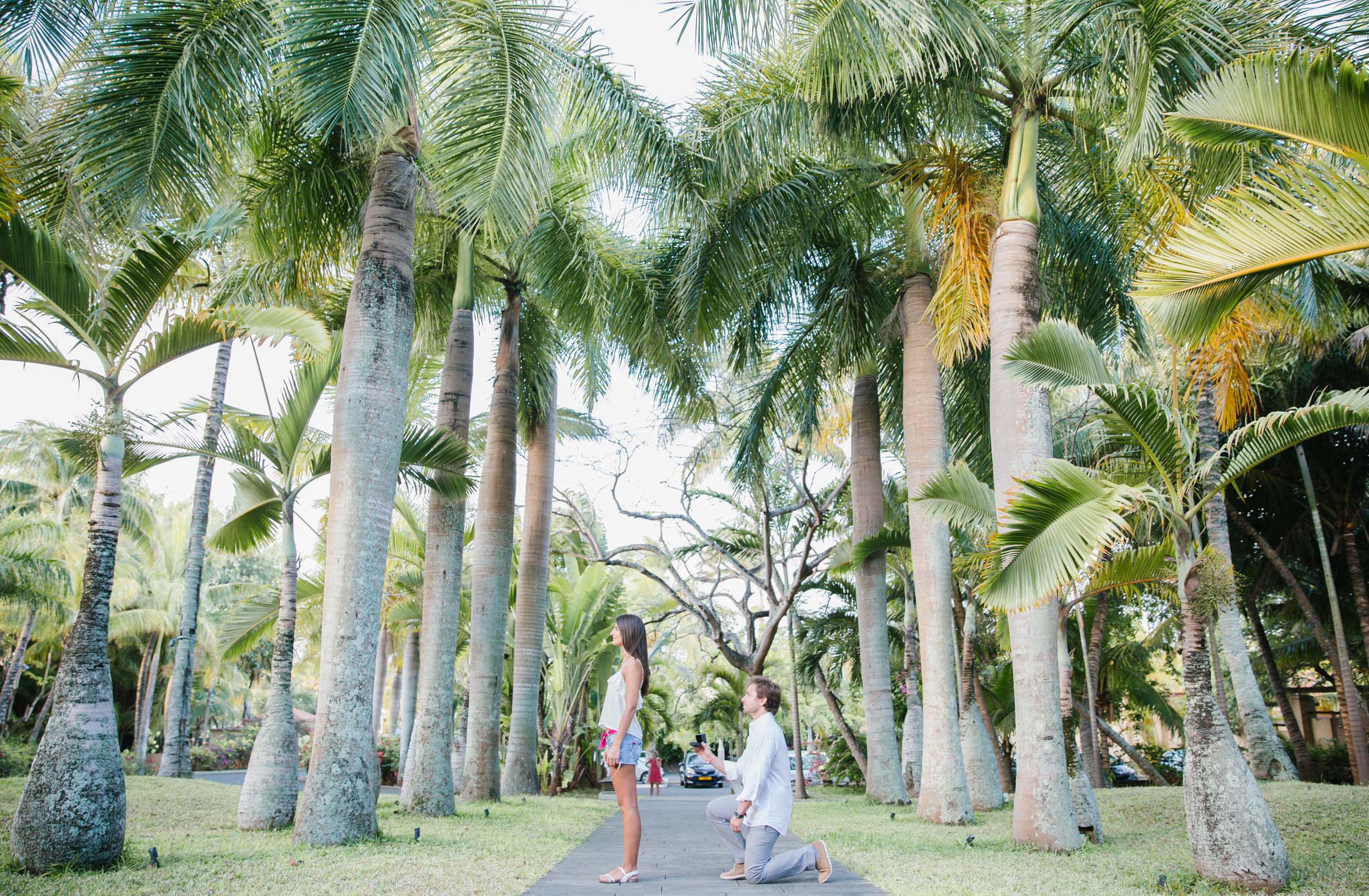 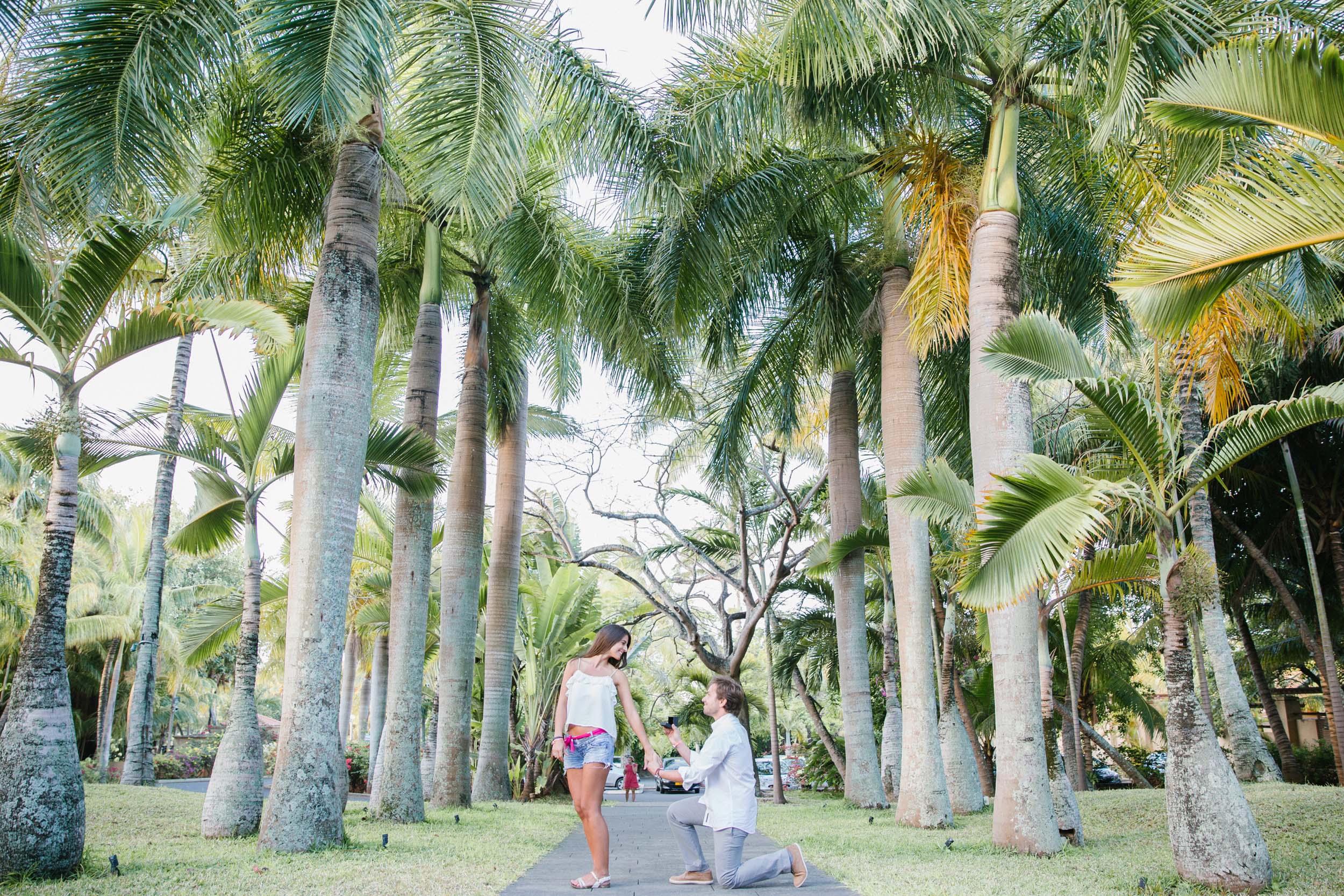 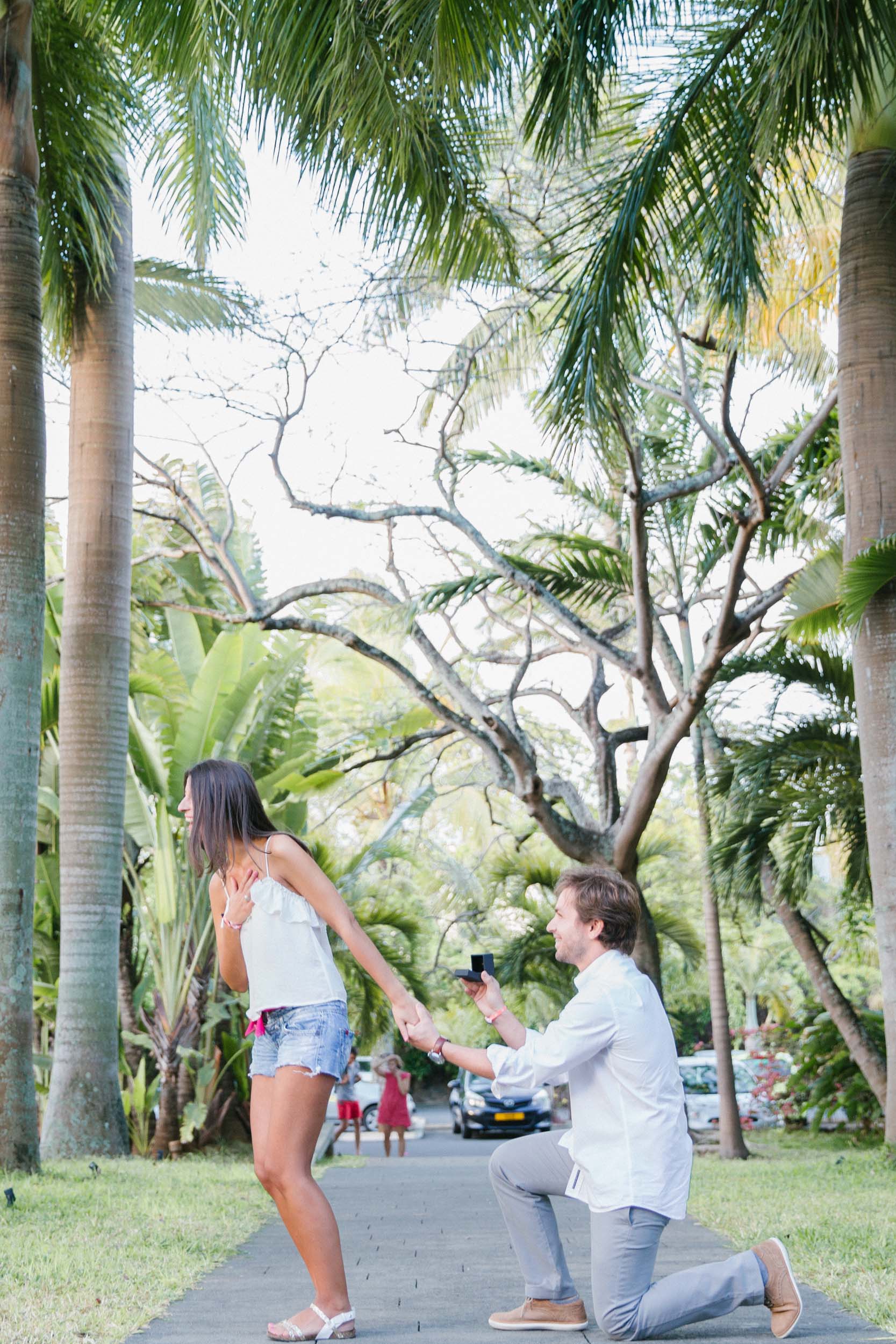 HOW DID YOU KNOW HE/SHE WAS ‘THE ONE’?

“I just knew! He is a wonderful man. I can’t wait to share my life with him. He is everything that I am not, so he completes me in every way. I’m lucky to have him by my side, being my partner in this adventure called life. I need to thank him for supporting me the past few years. Thanks for being the light in my life when I needed it most.” – Liliana

“I felt that this trip was the perfect time to propose to her because she is someone who completes me in the day to day and with her, I know that I can improve every aspect of myself. I felt that in our travels we completely disconnect from the problems that surround us and because of that, I was sure that I could spend the rest of my life with her!” – Celso 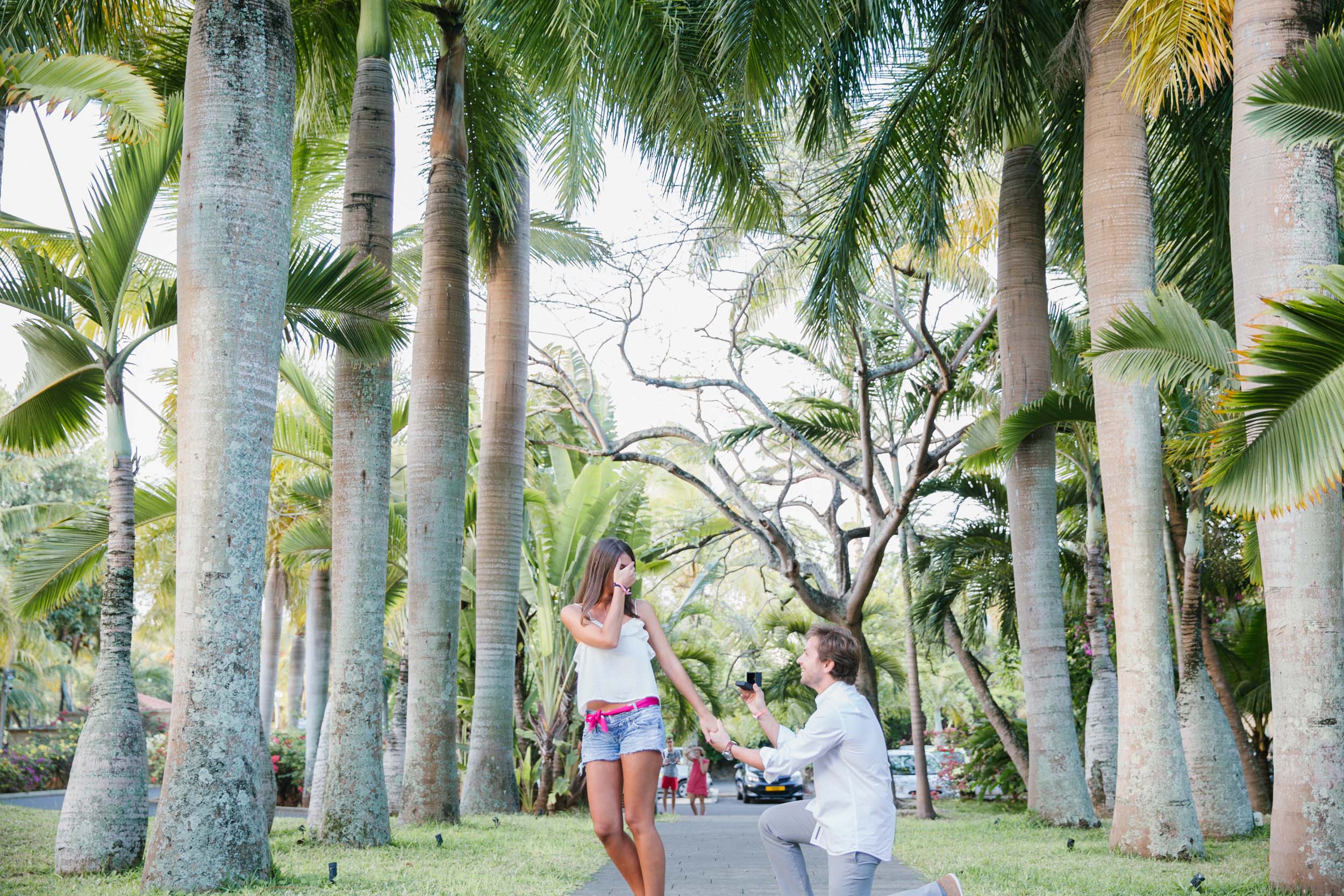 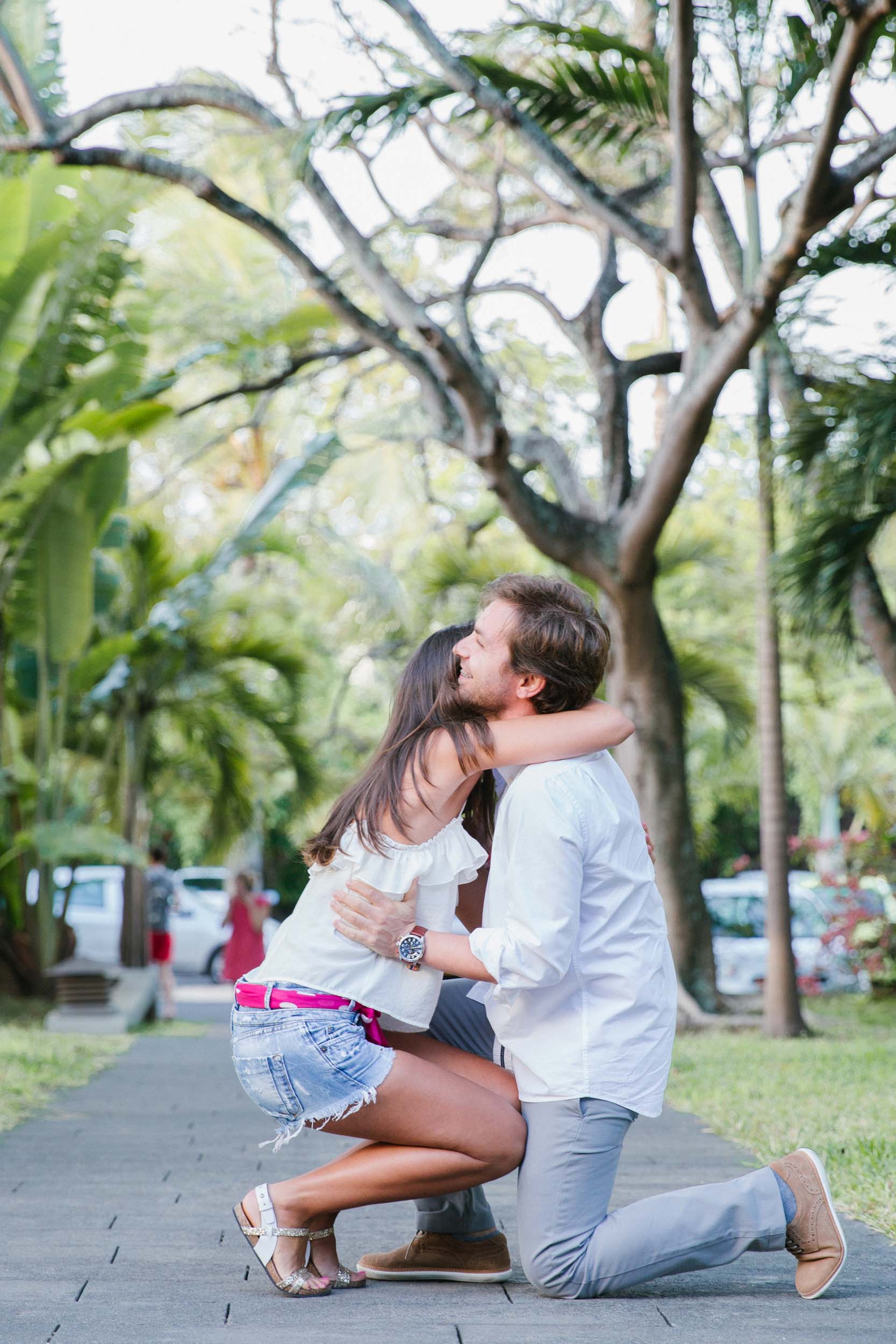 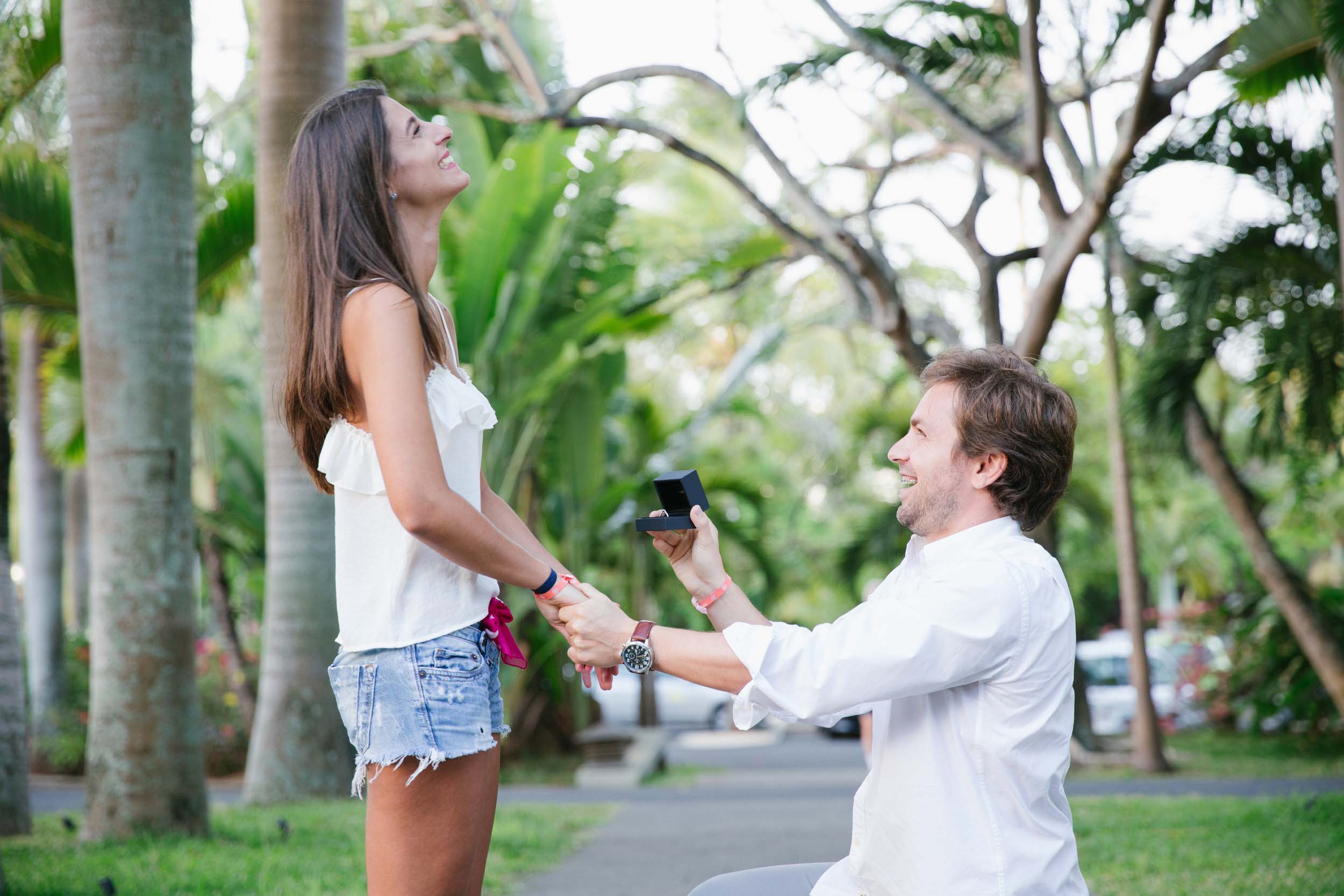 “The place chosen for the marriage proposal would have to be a heavenly and relaxed place. But the choice should have no apparent reason because she is quite perceptive and might figure out what I was planning. That’s why our photographer Mayline, our shoot concierge Tedi and I made up a story that the session had been a prize I had won in a contest. Halfway through the session, Mayline gave me the cue to propose with a beautiful perspective of palm trees for background framing, almost as if it were a natural church altar.” – Celso 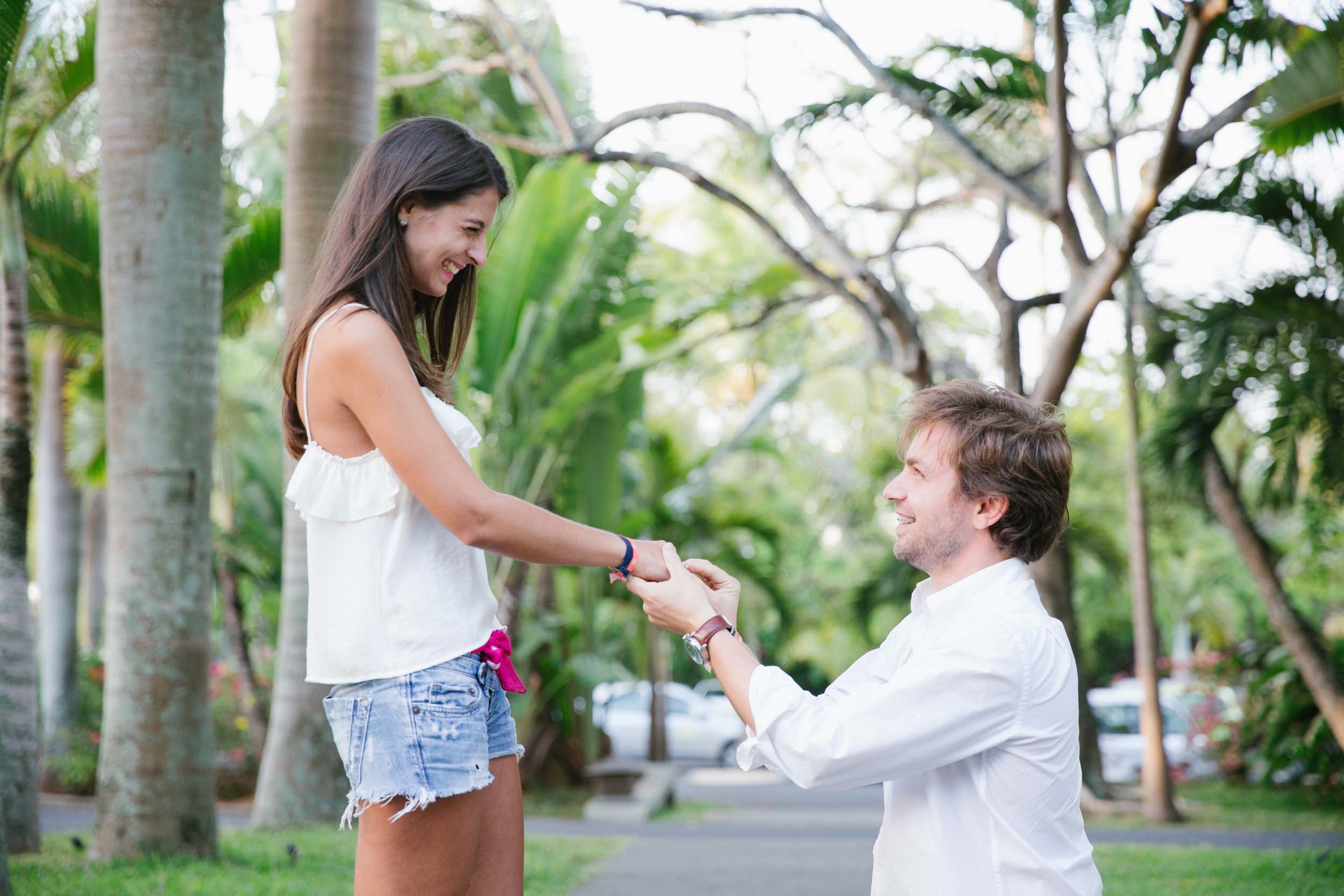 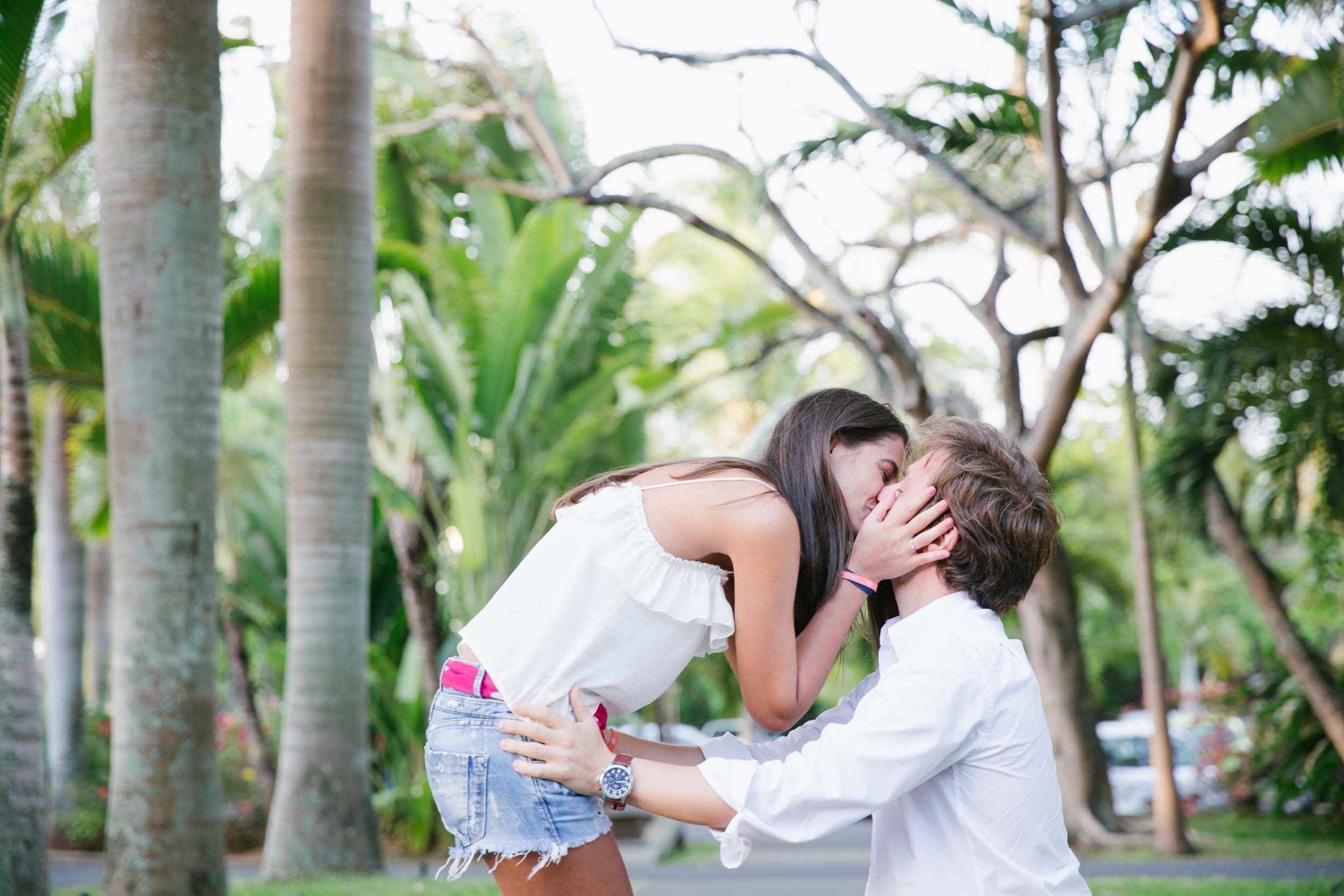 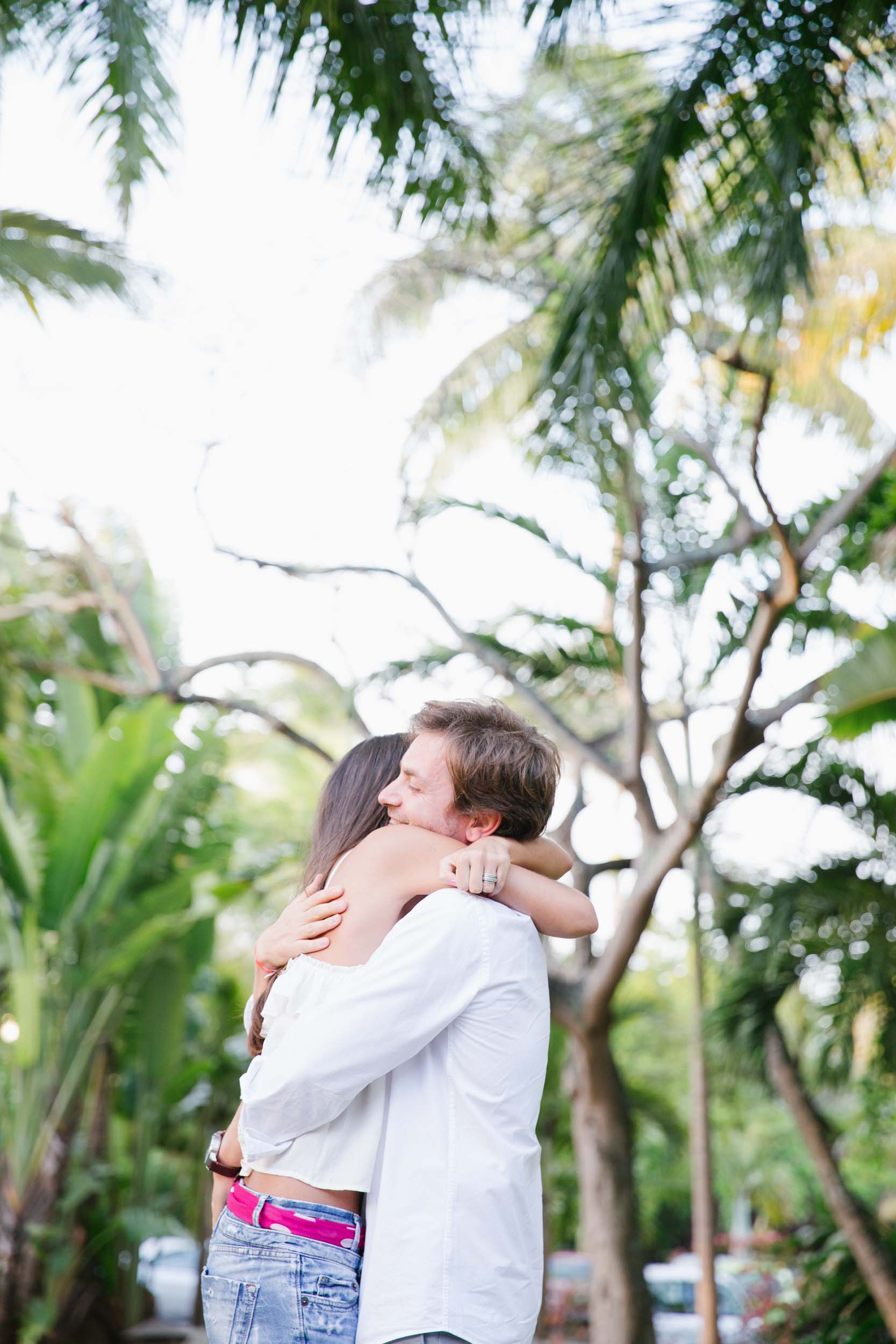 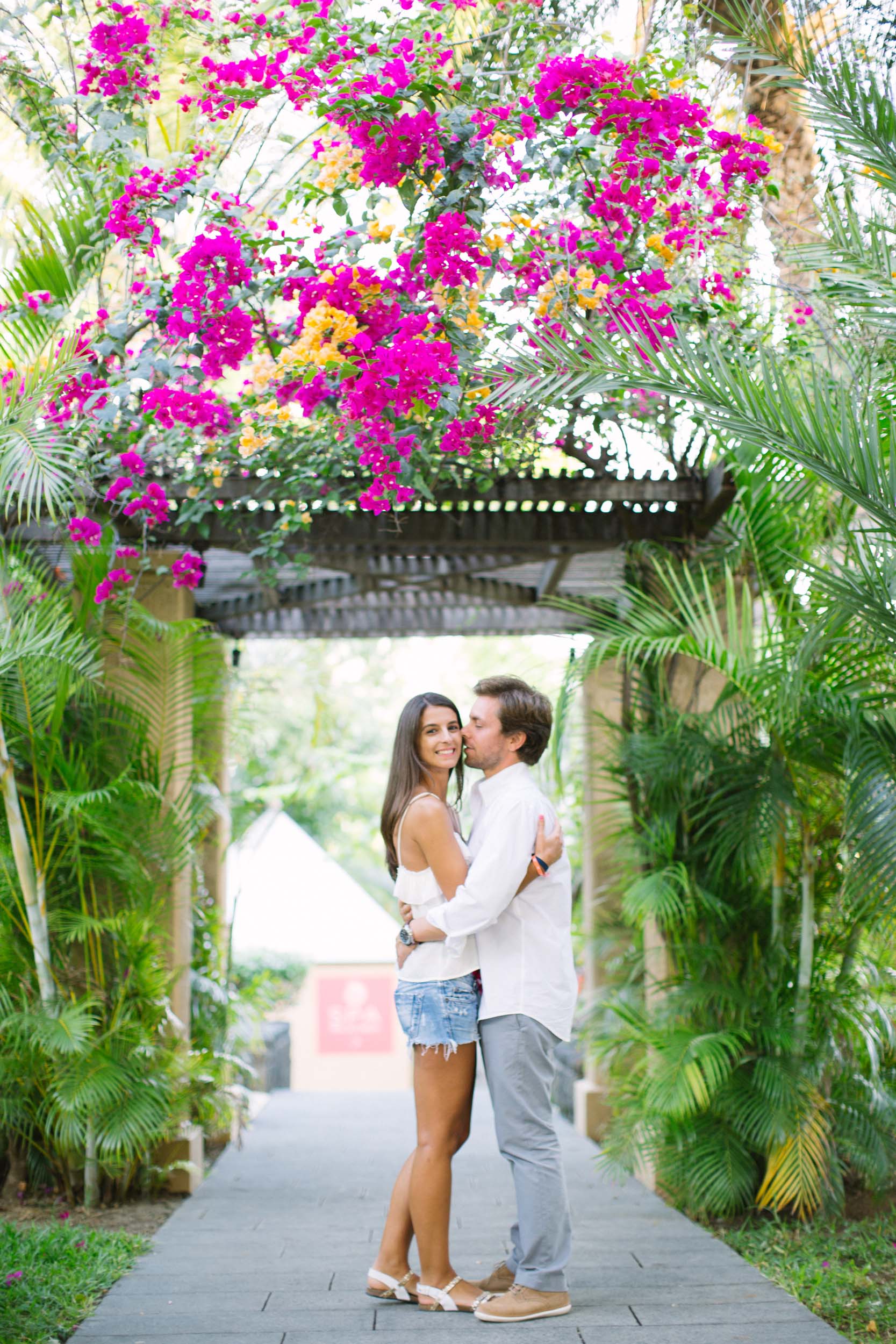 “The proposal happened in a beautiful island in the Indian Ocean called Mauritius. Celso told me days before the trip that we had won a photo shoot at the hotel and I believed him without even blinking – he wins a lot of contests! On the day of the shoot, I was very relaxed, thinking about having fun during the photo session, but I felt that Celso was a little stressed out. I was trying to hug him and he was always pulling me (Now I know why! He had the ring box in his pocket!). We went to the photo session, we did a warm up and then Mayline asked us to do a little game…

“And there he was, the love of my life, down on his knees asking me to marry him. I can’t remember the words he said to me. I only remember his eyes full of tears and love, the cold hand shaking and my heart full of happiness, love and care. I totally forgot about Mayline! Now I get emotional every time I see those photos – that’s our story, our love. She captured our ‘Yes’ and our hearts wide open.” – Liliana

“On the big day, I was a little nervous. I remember practicing the speech in the sea while she was sunbathing on the beach – though she barely heard half the speech with anxiety when she saw the engagement ring! I also remember the care I had to take with the ring box, which was too big to put in my pants pocket without her noticing it. I had to wear a shirt outside my pants to cover the box in my pocket!” – Celso 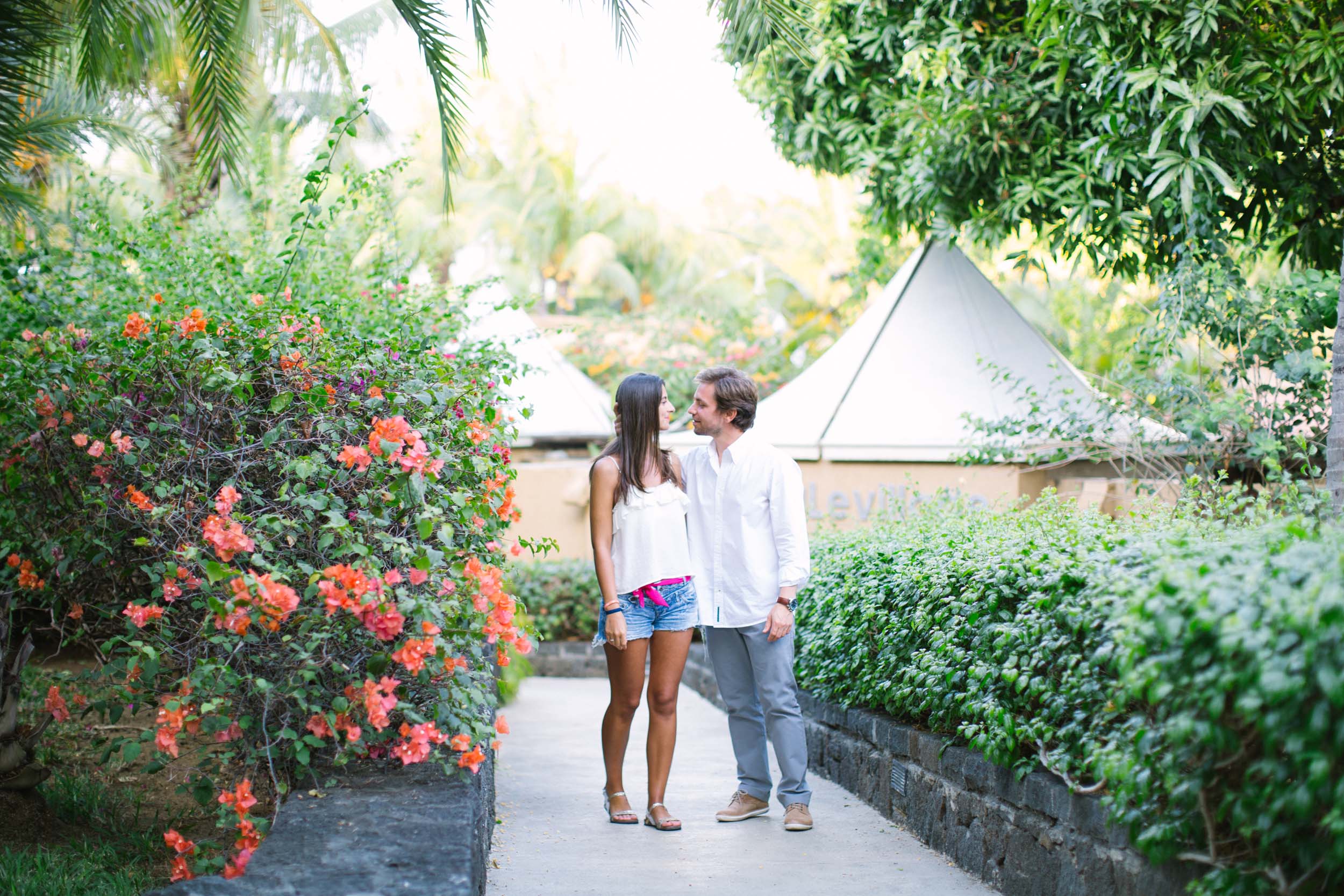 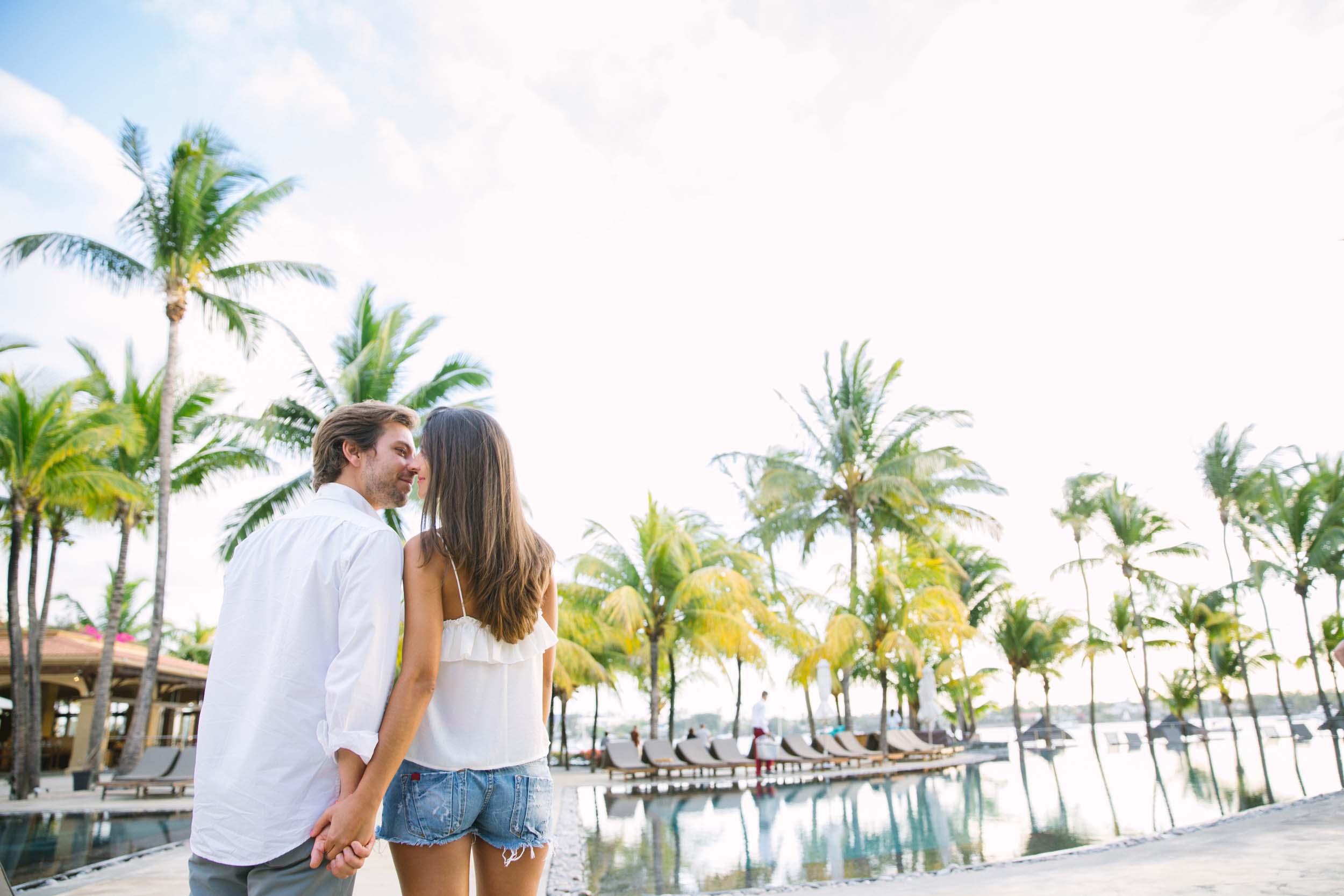 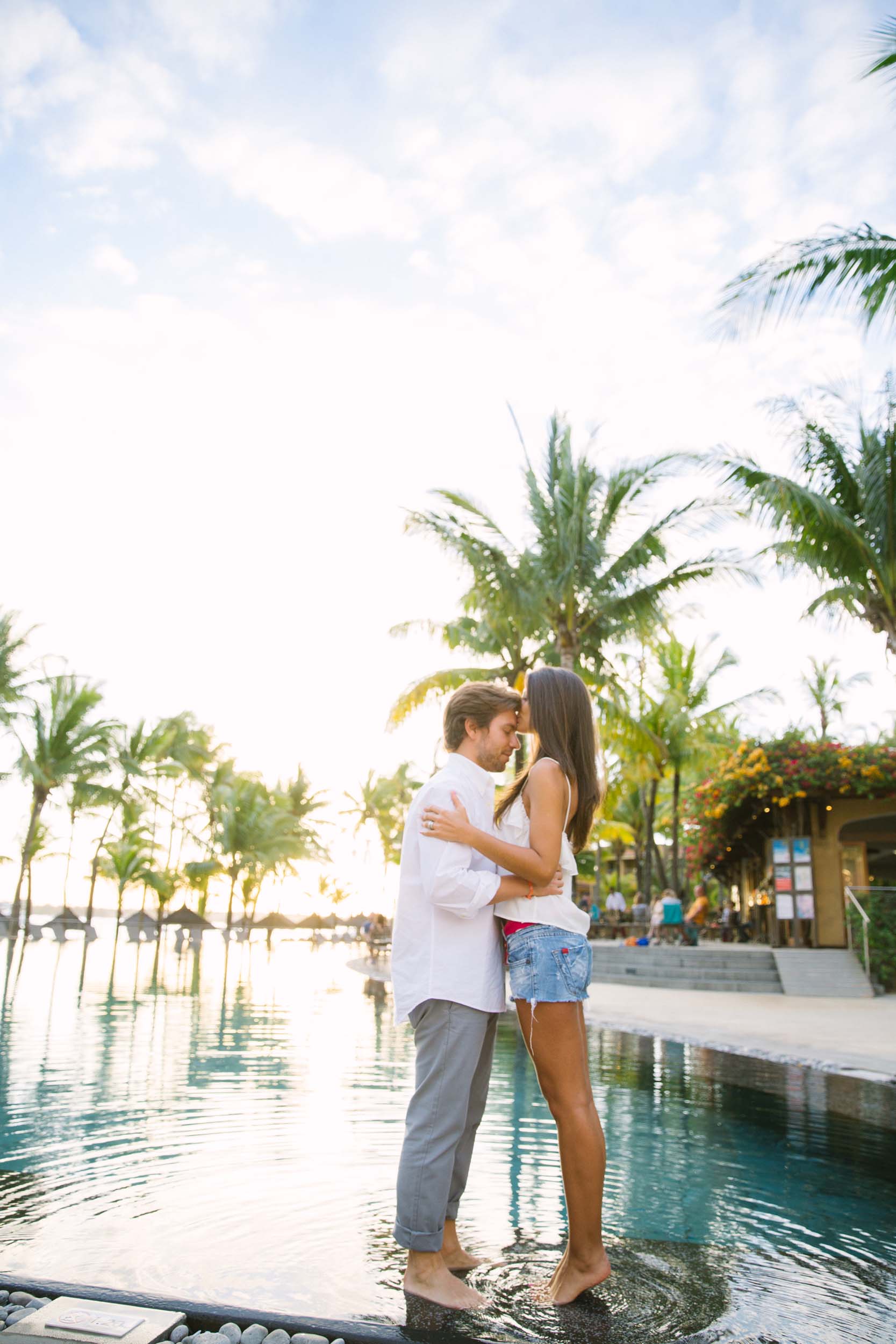 “We enjoyed what was left of the photoshoot and then we watched the sunset by the beach, drinking some cocktails to celebrate. That night, we had a romantic dinner where Celso told me how he planned the proposal and how he met Mayline.” – Liliana 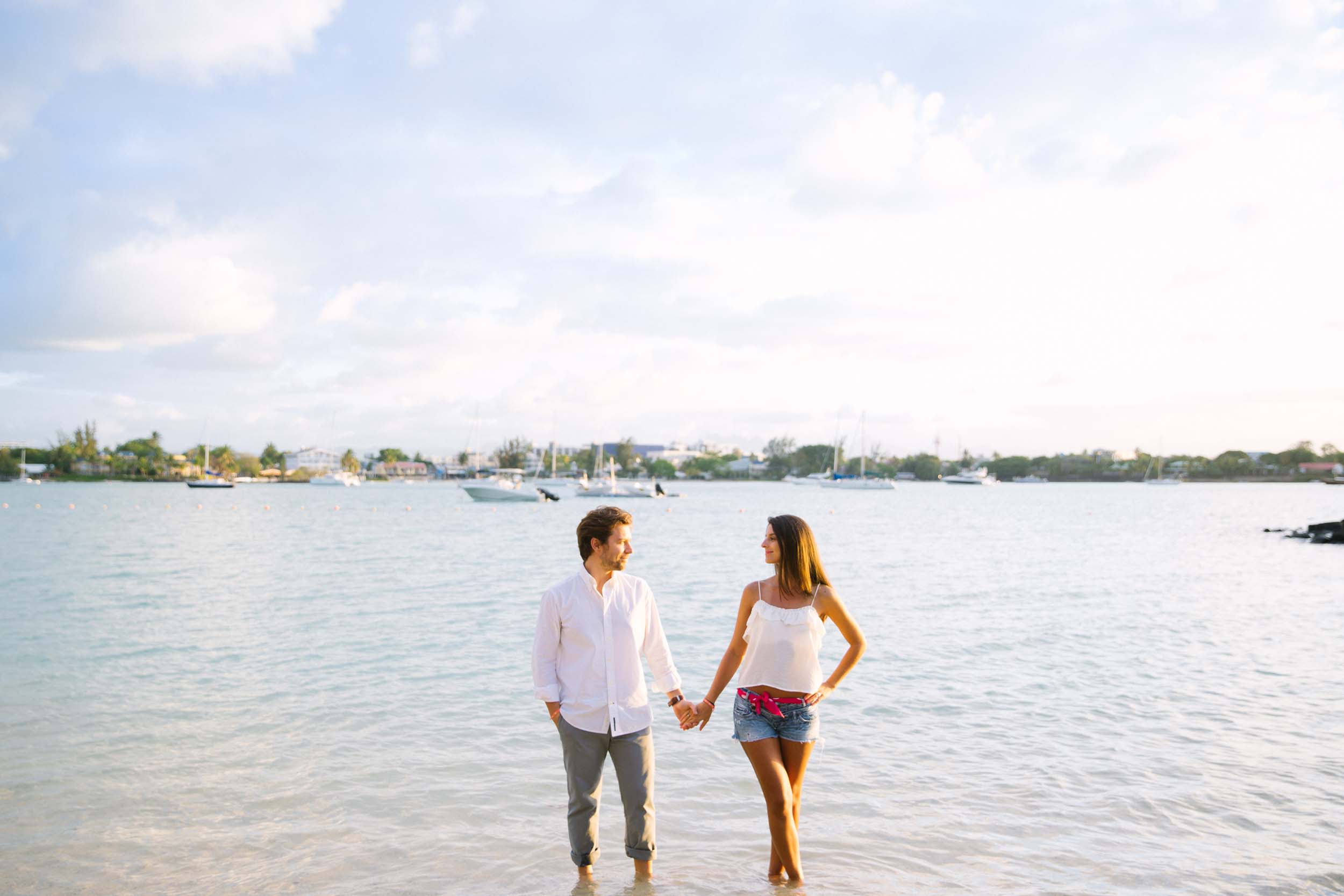 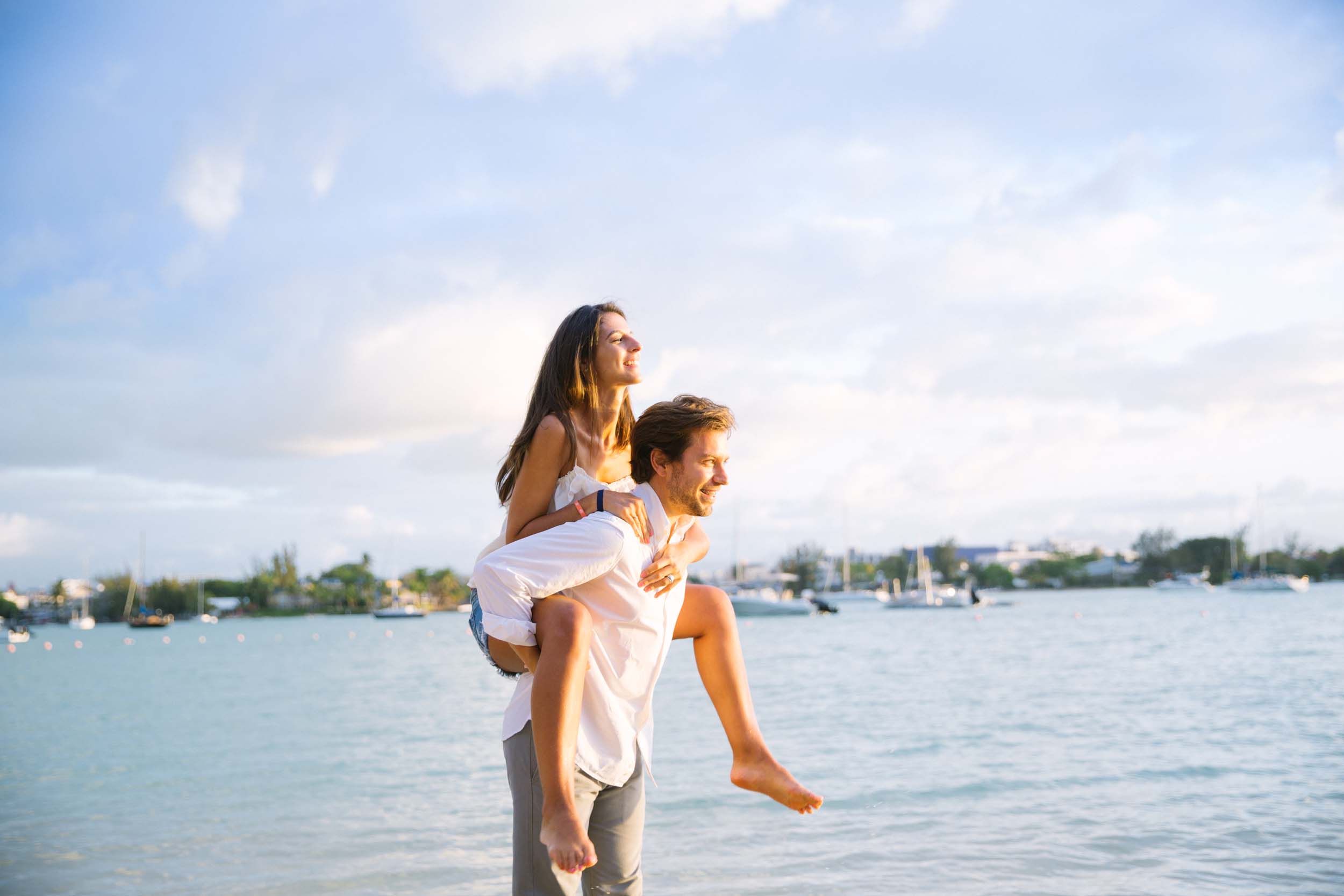 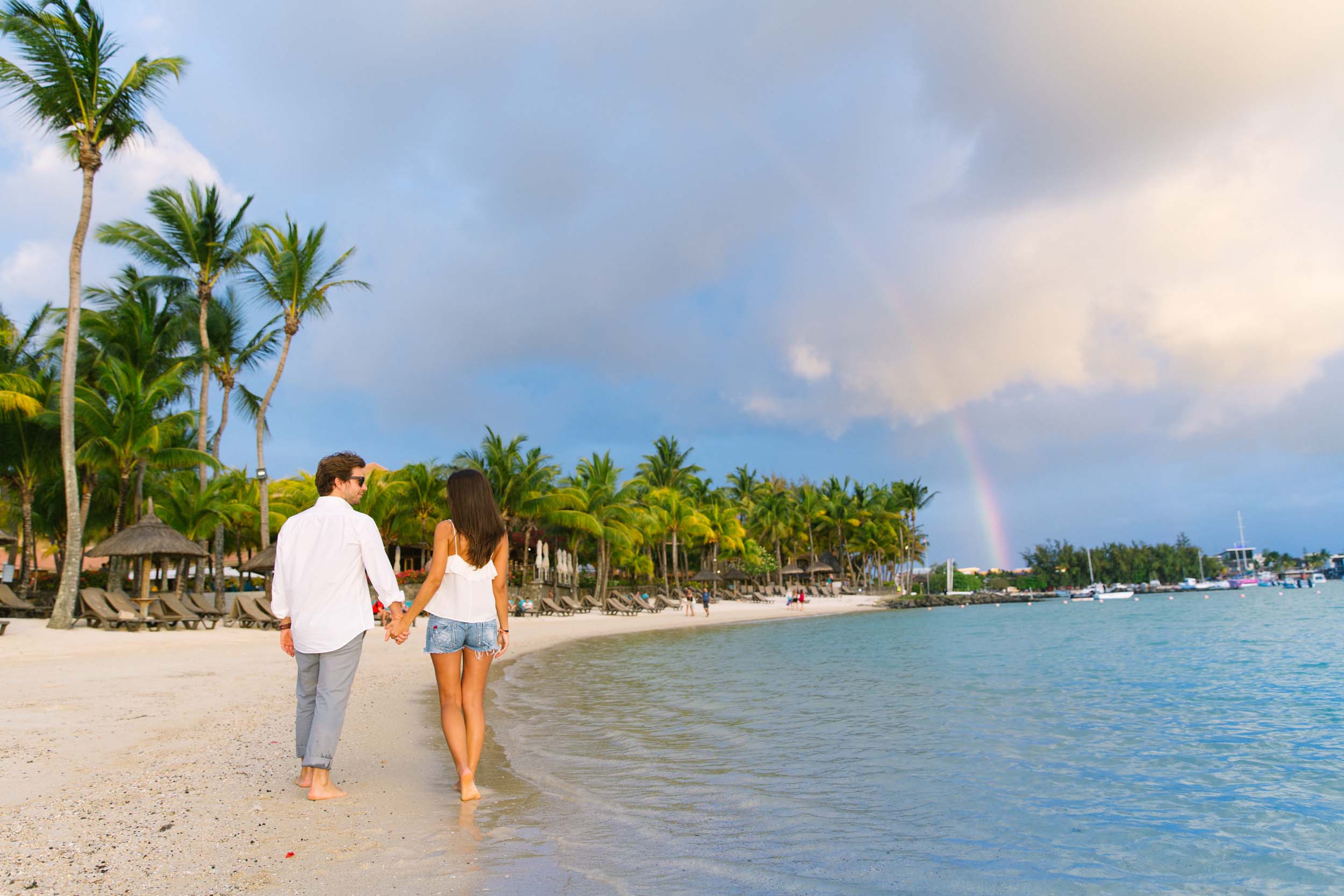 7 Tips to Have the Best Beach Photoshoot

30 Beach Photoshoot Ideas Beaches are reliably compelling backdrops for photo sessions, and there are a number of practical...