An Eiffel Tower Surprise Proposal in Paris with a Champagne Celebration 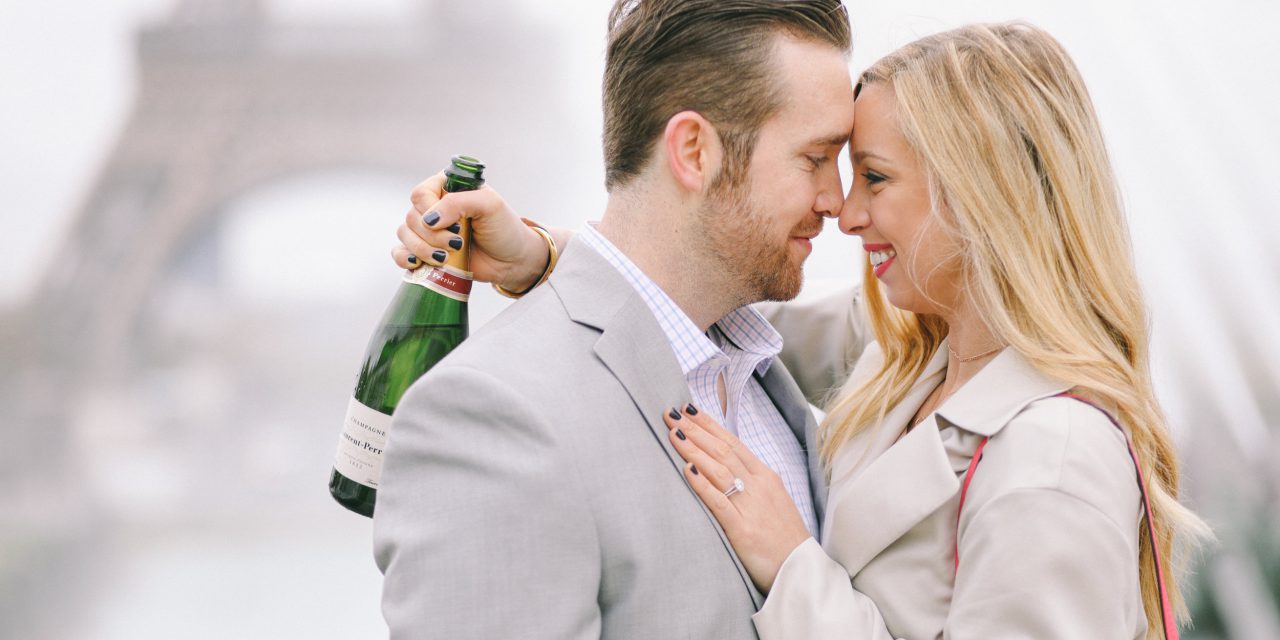 How do you make your first trip to Europe together even more special? Plan the romantic proposal of a lifetime, of course!

Tommy surprised longtime love Crystal with an iconic Paris proposal – complete with Eiffel Tower views, and stunning proposal photos. After capturing the big moment, the two wandered the streets with Flytographer Goncalo celebrating their love with a bottle of champagne!

Read on to hear more about their adorable love story, and see Crystal’s EPIC proposal reaction! Crystal: “Tommy and I met at Titan Crossfit in Baltimore, MD in April 2012. I was moving down to DC from NYC and while I was looking for a job in DC, I was staying in Baltimore with my parents and sister. My sister had just started doing crossfit and told me I should try it out. I was more of an elliptical gal back then and had no interest in going to a crossfit gym until she mentioned the cute guys. During my first week at Titan, they had an 80s workout party and I met Tommy at the party. A bunch of people were playing a drinking game (I call it Ring of Fire; he calls it Slap Cup) and he was teaching the group how to play. Being the only other person there who knew the game, Tommy and I started talking. “Fast forward to August 2012 and I was settled in DC and Tommy was doing his thing separately in Baltimore. Again, my sister made me come up to Titan for a Toga Party this time and it was the first time I had seen Tommy since the last party. By the end of the night, Tommy and I may or may not have gotten caught kissing in a corner and the rest is history.” Tommy: “I knew when she said yes to a first date, I had it in the bag. The first night we met playing Slap Cup, I knew she was going to go out with me and that I’d marry her one day.”

Crystal: “I produce events for work and I had a big premiere in London at the end of March and thought YOLO – Tommy’s never been abroad and I never take time off – we have to do a European vacation! It was pretty impulsive but we decided I’d work in London, Tommy would come to my premiere and then we’d jet to Paris for a few days and end with Amsterdam.

“Ironically, one of my girlfriends from NYC had just used Flytographer for her babymoon and I was obsessed with the idea of having great photos done during our vacation. Despite having been together for nearly 5 years, Tommy and I really only have photos from theme parties (see answer to question #1 haha) so I decided I’d get us a Flytographer while in Paris. Why not kick off our vacation with sightseeing by the Eiffel Tower (and photoshoot!) and then spend the day walking around the city together?! Done. I booked the Flytographer, set a date and we were off and running.” “The minute the opportunity became available to tag along on to Crystal’s business trip to London, I knew I had to propose. I moved up my proposal timeline and decided I was going to make Paris happen. “Crystal had been raving about Flytographer and showing me pictures from her friend’s babymoon and I thought, wow, I should book Flytographer and have them catch the proposal on film. Before I had known it, Crystal had already booked the photographer, picked a date and paid for it. How do you out-plan a planner?! So I went along with the Flytographer shoot, told her how silly it was, even encouraged her to cancel it…and was in cahoots with the company and our awesome photographer, Gonçalo, the whole time. She had no idea I’d been planning this with Flytographer for over a month.” “I was excited and nervous since I wanted it to be perfect. I couldn’t fall asleep the night before because I kept practicing my speech in my head. In the cab ride over to Trocadero Square, I definitely had butterflies. I had envisioned that moment a thousand times before and was really excited to make it happen.”

Crystal: “Tommy never let on that he was nervous about anything. He was his normal self during our train ride to Paris, still a pain in the ass to get out of bed the morning of our photoshoot and didn’t act like he was hiding a ring or had been texting Gonçalo for weeks! I had been trying to mentally prepare myself the days leading up to Paris and our vacation that he wasn’t going to propose and I was going to be totally okay with that. Ha!” “We basically ended up having an engagement-moon. The proposal kicked off our vacation in Paris and Amsterdam and we spent the next week gallivanting around both cities, eating every pain au chocolate/waffle in sight and drinking ALL THE WINE. The timing was perfect.” “When we got the photos from Gonçalo and Flytographer, I was shocked that we ended up with so many photos we LOVED. If it hadn’t been for those photos, I would have never remembered crouching down from excitement, the girls on the plaza cheering for us, us both staring at the ring together…it’s almost like we got a flip-book of every single amazing moment before, during and after the proposal. We are so lucky to have that time captured in photos.” capture your proposal in Paris

21 Best places to take pictures in Paris, France Since Paris is known as the City of Lights and the City of Love, 💕  it...

Hi! Nicole here, founder of Flytographer. 👋 Have you ever had a startup idea? 💡 One that you couldn’t stop thinking about? ...

Best Things to Do in Paris: Flytographer’s Local Travel Guide

“To breathe Paris is to preserve one’s soul.”- Victor Hugo Best things to do in Paris to live a localThis...