A Surprise Proposal Celebration in Budapest 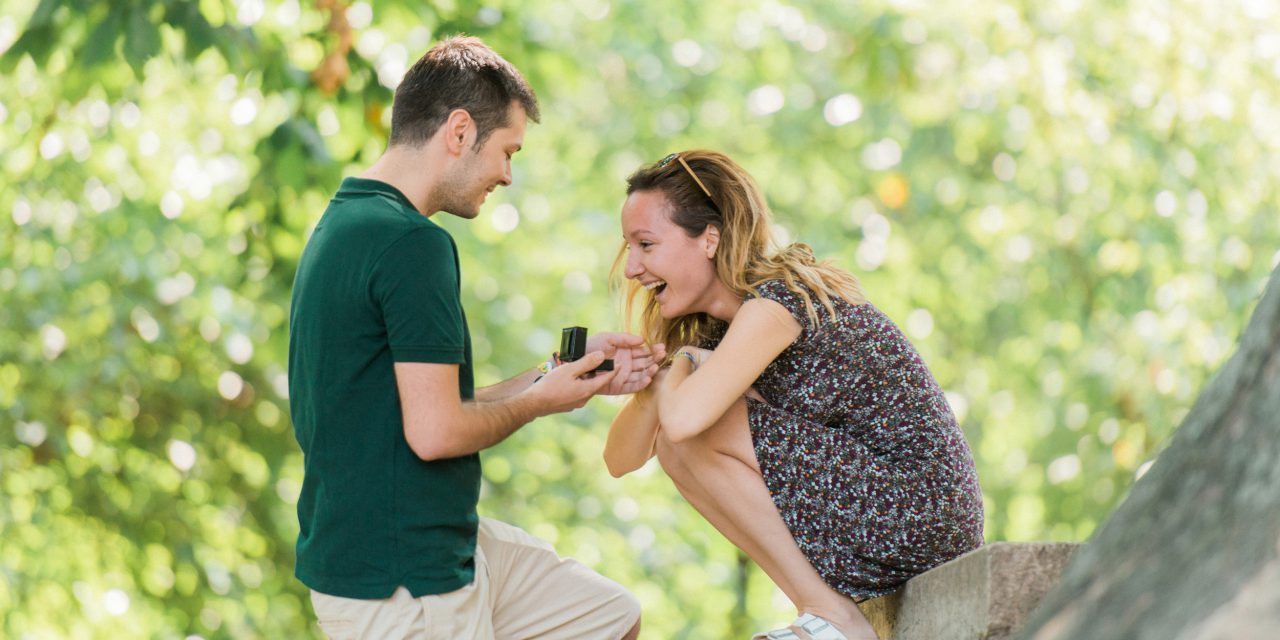 Off on an adventure with friends, Resat decided to surprise his girlfriend Asli with another reason to celebrate – this adorable surprise proposal! On their way to the Sziget Festival in Budapest, Flytographer Roky captured this super sweet moment, as well as the party in the park with friends that followed!

“We have known each other since high school, but both of us can’t remember where or how we met 🙂 After high school we did not see each other for 5 or 6 years. Then I went to military duty for 6 months and when I came back from duty, in my first night out to civilization with my guys I saw Asli across the bar and went straight to her. Actually, I am a shy person to do that but something couraged me to just go and talk to her. At first she tried to pretend that she didn’t remember me but I knew she was playing hard to get 🙂 Long story short, I got her number and we started seeing each other and everything worked out perfectly. We started living together in our first year and dated for 3 years since the proposal.”

“In the winter of 2015 I decided to marry her. I knew she is the one for me for a long time, but because of other situations like my work and many other things, I was waiting for the right time. So this year everything in my life started coming together and I decided to propose to her this summer.”


“A few weeks later, a couple of friends decided to go to Budapest for Sziget Festival. I knew Budapest is a beautiful and romantic city. So I decided to do it in Budapest but at that time I had no idea about how or where I was going to do it. I talked with lots of bars and restaurants in Budapest but none of them were satisfying me. Then my brother found Flytogrpaher and I started talking with Jen and Roky, our photographer from Budapest. I told them what I had in my mind. I wanted it to be natural, romantic and casual just like us. Jen and Roky were so sweet and helpful they helped me plan the whole thing from where I was going to stand to where I am going to walk to our spot. We had every detail planned. Our house in Budapest was near the city park full of trees, lakes and historic places. Roky sent me a couple of pics he shot before in that park and I thought that place was going to be great. He and I went through google maps to our spot for a several times just to be sure. So there are many more details but let me cut to the chase.”

“I decided to wake her up with beautiful and romantic breakfast in bed with some eggs, orange juice and tea. It was a romantic gesture but I was doing it so that she could come to the park with me after the breakfast. I thought she will feel that she owes me back 🙂 That plan worked perfectly. She was so happy for the breakfast and she was saying that this vacation was unforgettable already and In my head, i was thinking, “just wait until half an hour from now!'”

“We left the house started walking and I was so nervous – I still can not remember what was I talking about the whole time we were walking. Roky and I decided to meet at the shooting spot at 11. When we entered the park there was a little child handing out brochures for an organ concert in a chapel just next to my proposal spot. Asli said she really likes chapels and wanted to see that concert. I told her no but couldn’t push any further so we got into the chapel and I told her just five minutes then we have to leave. She agreed but the priest of the chapel locked the doors after we enter and said that the concert is going to take 20 minutes. I had to tell Roky that I was going to be late but I forgot my cell phone back at home. I started sweating like crazy and Asli did not know a thing!”

“After 5 minutes some tourists knock on the door and the priest got up to open it so I told Asli we have to get out, she still says why are you rushing and I told her I needed coffee really bad. Thanks to those tourists we left the chapel and we were back on track with a 5 minute delay. After we left the chapel I turned around the corner and saw Roky waiting near the lake. That was it. I was really shaking.”

“After the selfie I held her and told her that I brought her here for a reason. I was pale white and so nervous she thought I was going to give her some bad news! But after that I told her about how much I love her, how she changed my life and how she makes we want to be a better man and I why I want to spend my life with her. She still did not have a clue that I was going to kneel down and she said lots of romantic things back to me. She was saying thank you for bringing me here then I pulled myself together and just kneel, popped out the ring and told her the magical words. She was so shocked she sat down with me without answering the question and she was laughing and crying at the same time.Then I told her that she did not answer and I asked her one more time to marry me and she was like ‘of course I’ll marry you!’ The happiness in her eyes at that moment is a thing that I can’t describe. The relief, peace and happiness we felt together was amazing and thanks to Flytographer we shared that magical moment with our families and friends and hopefully we will share them with our future kids.”

Flytographer Roky had such a fun time shooting these two, but everything on the day didn’t go exactly to plan! “Resat and Asli didn’t make it to the agreed spot on time and I was beginning to get worried there might be something wrong 🙂 Turns out, they popped into a nearby chapel where a small impromptu concert was being performed and someone locked the door on them! Resat snuck out a text message to a friend and had him call me to let me know they were going to be late. That was funny!”

“Once I was revealed, I had them follow me a nearby spot for a few additional shots where the rest of their travel companions showed up with some bride/groom boutonnieres and champagne to celebrate. That was insane :)” – Roky

For more inspiration for your proposal abroad, check out our Travel Stories!

The 6 Biggest Mistakes to Avoid When Proposing to Your Partner

Proposing to your partner is a fleeting moment that absolutely overflows with joy and celebration. Leave it to us to...