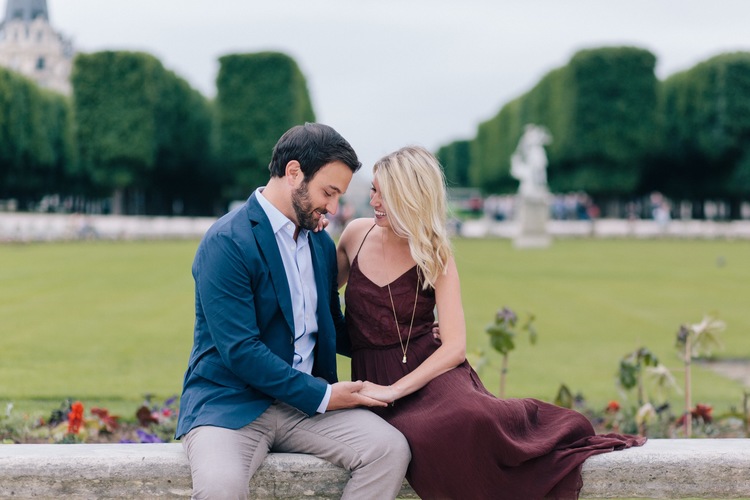 While the Eiffel Tower is iconic for Paris proposals, some of Paris’ other landmarks can be hidden gems for proposal locations! Dani knew that Paris is the most romantic place in the world to propose, and decided to go off the beaten path to drop down on one knee for his sweetheart, Ali. These two started this exciting new chapter of their lives in the beautiful and historic Luxembourg Gardens, and Flytographer Goncalo was there to capture the magical moment! Read on to hear about this stunning proposal and amazing trip abroad!

“We met in college as I was graduating and then did long distance for a year before she moved to where I was, in NYC. We have been together for 5 years now. On this trip, we were already traveling to the Middle East and Turkey, so it was easy to add a few days in Paris to the end of our trip. I figured there is no better place to get engaged than in Paris. I knew the Eiffel Tower would be difficult to do because of the crowds and tourists, and I heard that the Luxembourg Gardens were beautiful.” – Dani

“Dani and I had discussed going to The Luxembourg Gardens and then going to brunch afterwards for our last day in Paris. When I woke up on Saturday morning, Dani was already in the shower getting ready. He seemed anxious to get out of the apartment and to the gardens, so I quickly got ready and we took a cab there.  He kept insisting that his brother, George, had told him that The Luxembourg Gardens would be extremely crowed if we went too late in the morning, so we were rushing to get there bright and early. Little did I know, he had made that all up!” – Ali

“I had suggested that we sit down before the gardens to enjoy a cappuccino, but he was adamant that we get one to go instead and drink it there.  We decided to stop at Le Luxembourg, on Boulevard Saint-Michel, to  get our cappuccinos and croissants, and then walked over to the Gardens. We meandered around for a bit and I started taking pictures while Dani ate his croissant. He then came over and asked me to put my coffee and camera down. I didn’t understand at first why he wanted me to do this, and then I realized something was up! He proceeded to get down on one knee and asked me to marry him. I immediately said “of course!” I couldn’t stop shaking from nerves, and I absolutely think he was nervous/shaking as well 🙂 “ – Ali

“Apparently I had a piece of a croissant stuck in my beard when I went down on my knee to propose. Thankfully it was on my left side and the pictures were taken from the right, so it does not show!” – Dan

“Goncalo was amazing. He was so patient with us and really took the time to photograph the real “us.” He took the most beautiful pictures (the scenery certainly helped!)  and made sure we were comfortable the entire time. I’ve never been so thankful for photographs in my life. Dani knows how much I love to capture special moments, and I am so lucky that he found Flytographer to capture the engagement!” – Ali


“Paris was absolutely beautiful. It was the first time in two weeks we were alone, and we really enjoyed experiencing Paris for the first time together! My favorite day was of course when Dani proposed. He surprised me with a beautiful hotel suite that night and had champagne and roses waiting in the room upon our arrival. The room also had a balcony with an incredible view of The Eiffel Tower! I wish we had more time in Paris to celebrate our engagement, but I am so thankful for the entire day and experience. It was all totally unexpected and so perfect!” – Ali

We wish these two an amazing life together, filled with love and adventure! xo Flytographer

View Destinations
Give a gift card

Vacation mode Whether you are an avid world traveller, adventurous summit-seeker, wanderer at heart, or magical memory-maker, we have...