Sitting on the Atlantic coast, on Baía de Todos os Santos, or All Saints Bay, the city of Salvador is the capital of the state of Bahia, and it was the first capital of Brazil. This awe-inspiring and incredibly diverse city should definitely make your Brazilian travel bucket list along with Rio de Janeiro and São Paulo. Salvador da Bahia boasts a unique blend of Afro-Brazilian culture, Portuguese baroque churches, UNESCO World Heritage Sites, and some of the best beaches in Brazil. All year round, the city is the stage for the dance moves of capoeira and the mysticism of Candomblé. As you would expect, everything is incredibly camera-friendly. So, here we are with another blog to show you the top 5 places to take photos in Salvador, Brazil. Can you hear the beats of the Brazilian carnival already? 🥁🇧🇷 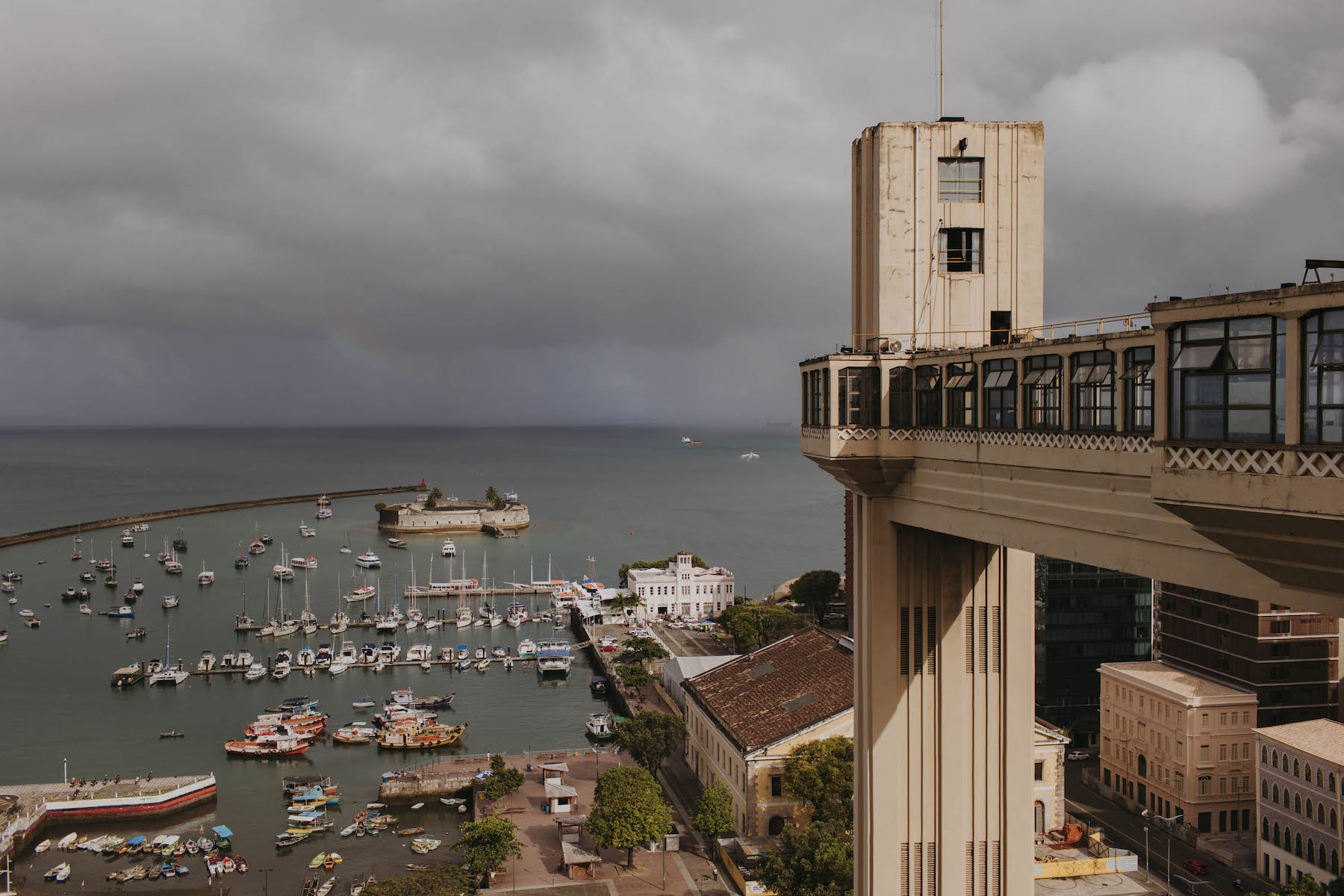 Photo: Taylla in Salvador for Flytographer. A photo of Pelourinho in Salvador, Brazil.

In the historic centre of Salvador, Pelourinho is the city’s oldest and most famous district. The entire area is listed as a UNESCO World Heritage Site and will offer gorgeous backgrounds for your pics, including colourful colonial buildings, intricate churches, and charming squares.

At Largo do Pelourinho, you’ll find the stunning Church of Our Lady of the Rosary of the Black People, an 18th-century structure that was almost one hundred years in the making. The church’s curious name comes from how the institution incorporates religious African beliefs into its rituals. The building’s façade is bright blue and beautifully complements the multicoloured surroundings. 💙

Walk along the cobblestone streets of Pelourinho and you’ll find several museums, cafés, bars, and boutiques. Look for Casa do Carnaval, where you can admire the costumes and mannequins that comprise the world-famous Brazilian street party. Don’t miss Igreja de São Francisco. This church is nicknamed the Golden Church because of its magnificent baroque interiors covered in gold which makes it one of the best places to take photos in Salvador. Nearby, the Church of the Third Order of St. Francis is equally impressive. It displays beautiful Portuguese tiles on its exterior.

The district of Pelourinho is in the upper city. A great way to get there from the lower city is to ride the iconic Elevador Lacerda, a public lift that’s an icon of Salvador and a Brazilian heritage site. At the top, a postcard-worthy view of All Saints Bay is waiting for you. 😍

Before going up Elevador Lacerda, check out Mercado Modelo in the lower city. This market has over two hundred stores where you can buy gifts and souvenirs from Bahia. Still in the city centre and only a stone’s throw away is the Museu de Arte Moderna da Bahia, the local Museum of Modern Art, housed in an old historical house, Solar do Unhão, also built in the 18th century. 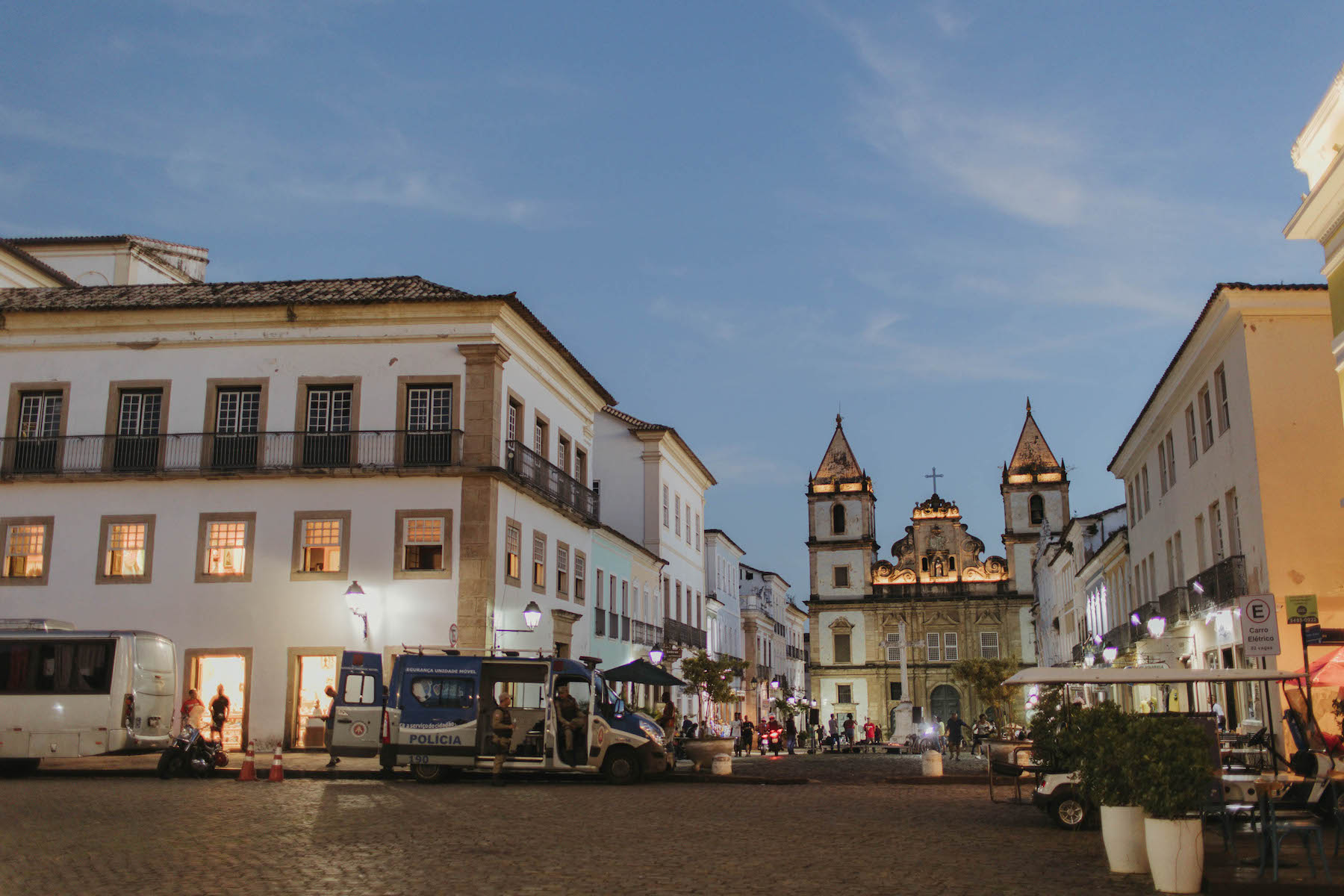 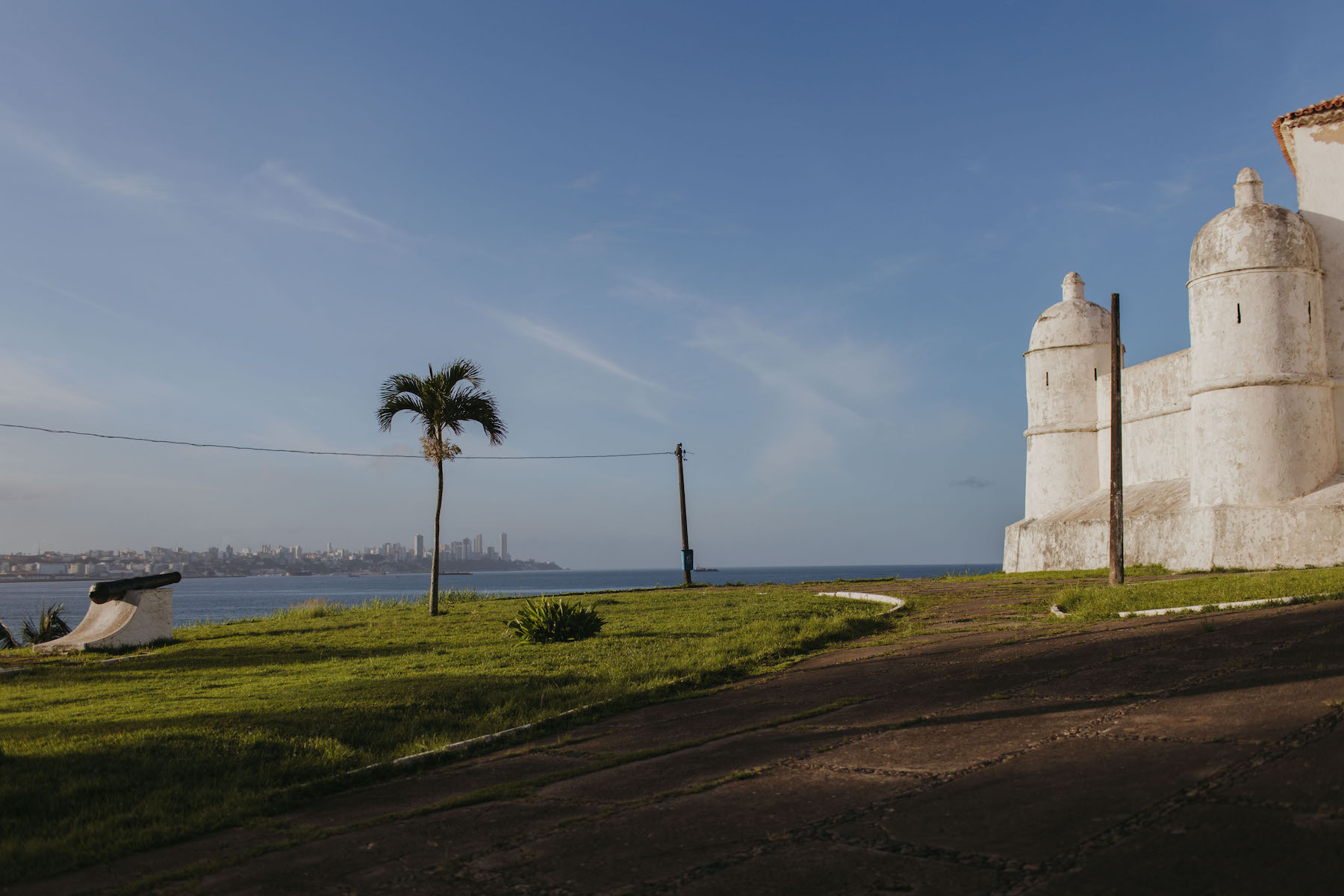 Photo: Taylla in Salvador for Flytographer. A photo of Pelourinho in Salvador, Brazil.

Igreja do Bonfim, or the Church of Nosso Senhor do Bonfim, is a symbol of the city and one of the most visited landmarks in Salvador. The interior is a mix of gold and silver adornments, frescoes, and murals of Portuguese azulejos, the same type of tiles you’ll find in Porto and other Portuguese cities. 😮

The railings of the front steps are the real superstars: they’re covered with hundreds of thousands of multicoloured Senhor do Bonfim ribbons. The ribbons are the best souvenirs to get while in Salvador. You can find them for sale in several colours anywhere on the streets.

Popular belief says the ribbons bring good luck, but you need to follow some simple steps: wear one around your wrist or ankle and make three wishes while someone else ties it for you. They need to tie three knots—one per wish. When the ribbon falls off, your wish will come true. 🍀

Alternatively, you can tie them to church railings. Still, it’s much cooler to pick your favourite colour and wear the ribbon on your wrist, isn’t it?

If you visit in January, a visually striking ritual occurs each Thursday in front of the church when hundreds of Bahian women dressed in stunning white lace dresses, turbans, and beaded necklaces, wash the church’s steps. 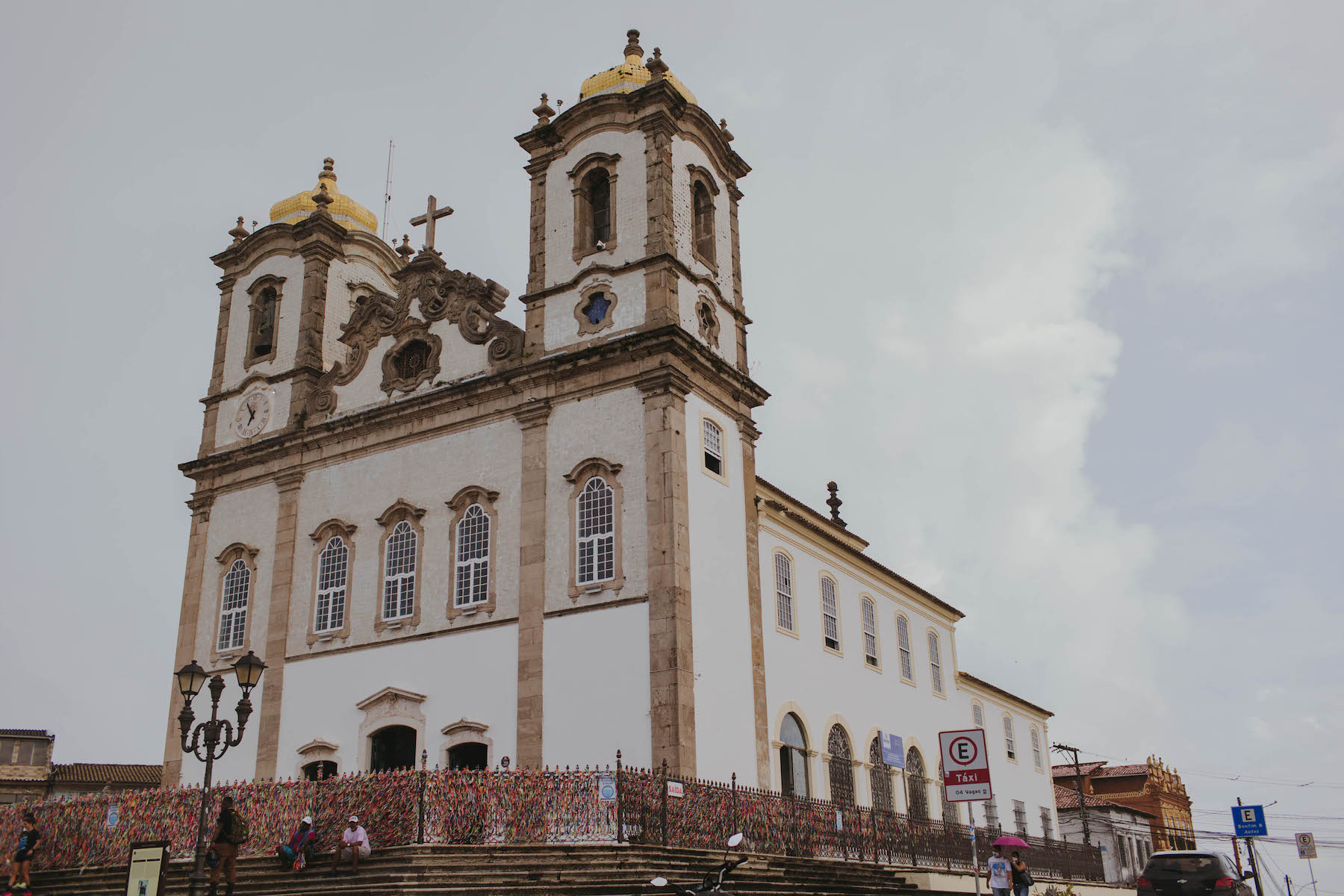 Photo: Taylla in Salvador for Flytographer. A photo of Igreja do Bonfim in Salvador, Brazil.

Facing All Saints Bay, Farol da Barra, or Barra Lighthouse, is a famous tourist attraction in Salvador. Also known as Santo Antônio Lighthouse, this 22-metre-high structure was built in the 17th century and is one of the oldest lighthouses in South America. Its horizontal black-and-white pattern makes it look like something out of a Wes Anderson movie. Even more impressive are the views from the top, so it’s totally worth climbing the one hundred steps to get up there. 👍

The lighthouse was built above the Santo António da Barra Fort, which today is home to the Nautical Museum of Bahia. The museum displays several historical objects, including artifacts of shipwrecks from three hundred years ago. Visiting it is a great way to learn about the relationship between humans and the sea. ⚓

Around the fort and lighthouse, you’ll find plenty of spots with ocean views and more fantastic places to take photos in Salvador. The area is very popular among locals, and you’ll spot them jogging, cycling, and skating.

Barra Lighthouse sits between Praia do Farol da Barra and Praia do Porto da Barra. The former is Salvador’s most famous beach and has lovely views of the old fort and lighthouse, while the latter boasts a smaller scenic fort surrounded by palm trees.

Also worth knowing is that it’s an excellent spot to grab one of the best local treats Salvador has to offer, a good ol’ acarajé—a delicious, deep-fried fritter made with black-eyed peas and packed full of shrimp, cashews, and spicy pastes. Trust us: acarajés are the top street snack in Bahia! 😋 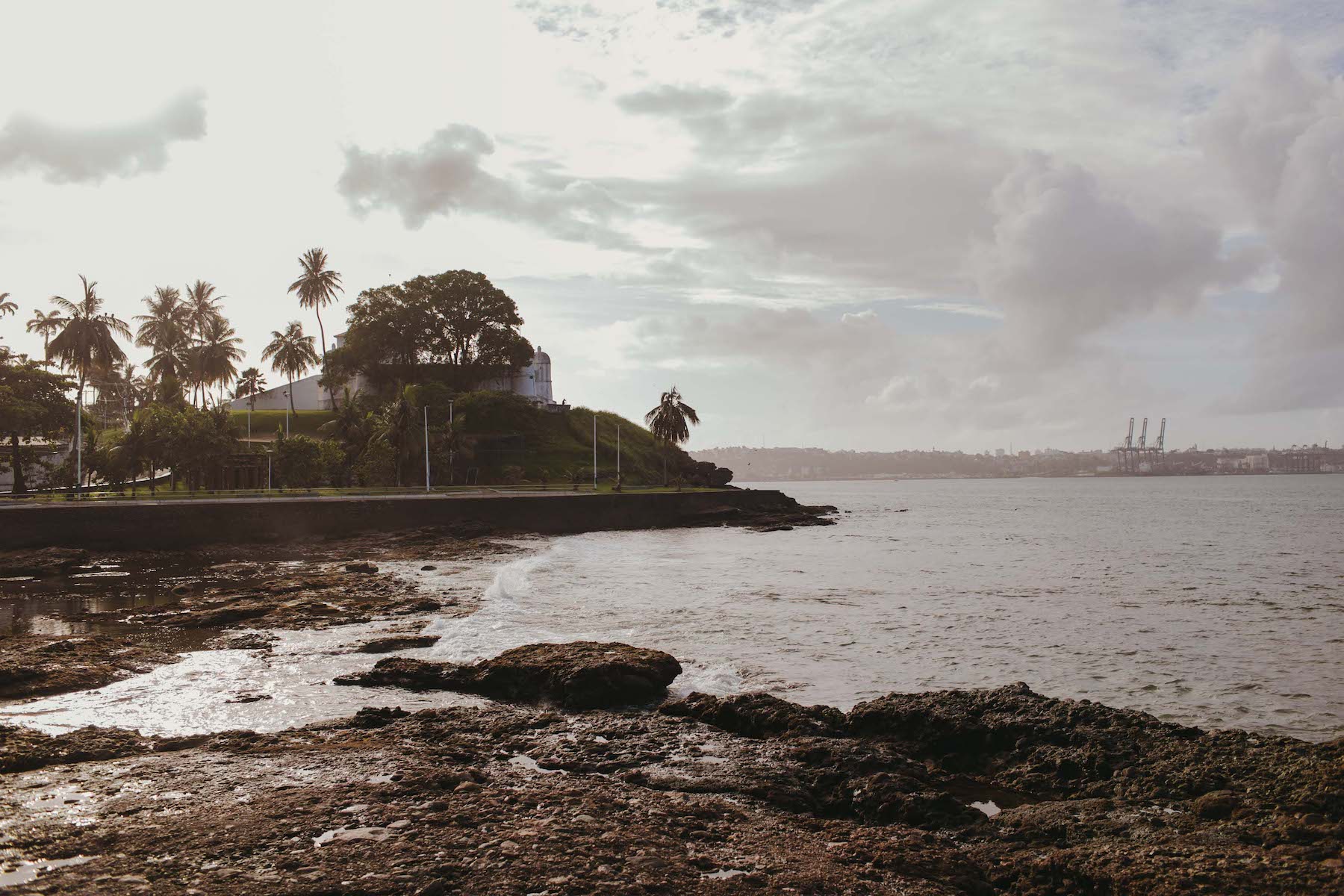 Photo: Taylla in Salvador for Flytographer. A photo of Farol da Barra in Salvador, Brazil.

For a different side of Salvador, head to Rio Vermelho, the city’s trendy neighbourhood. This seaside district has more amazing beaches for you, including Rio Vermelho Beach and Buracão Beach. When the tide is low, several natural pools form in the latter, making it a favourite for families with kids. Both beaches are great for photo shoots, especially during sunsets. 📸

Rio Vermelho is also known for being a big inspiration for the work of one of Brazil’s most prominent writers, Jorge Amado. Casa do Rio Vermelho, or Rio Vermelho House, is where he lived with his wife, Zélia Gattai, who was also a writer. The garden, where their ashes were spread, has a lovely energy. Replete with local trees and plants, the scenery is worthy of one of Amado’s novels and makes a beautiful background for your photos.

Rio Vermelho shows all its bohemian vibes at night with busy restaurants and bars, especially around Largo de Santana. The ultimate bohemian experience in Brazil is finding a boteco, grabbing a cold beer, and chatting the night away. Additionally, if you like to dance into the wee hours, Rio Vermelho’s nightlife is also legendary. 💃

Hungry after so much dancing? Look for one of the many street stalls—it’s acarajé time, and the unassuming stalls around Largo de Santana sell the best in town. 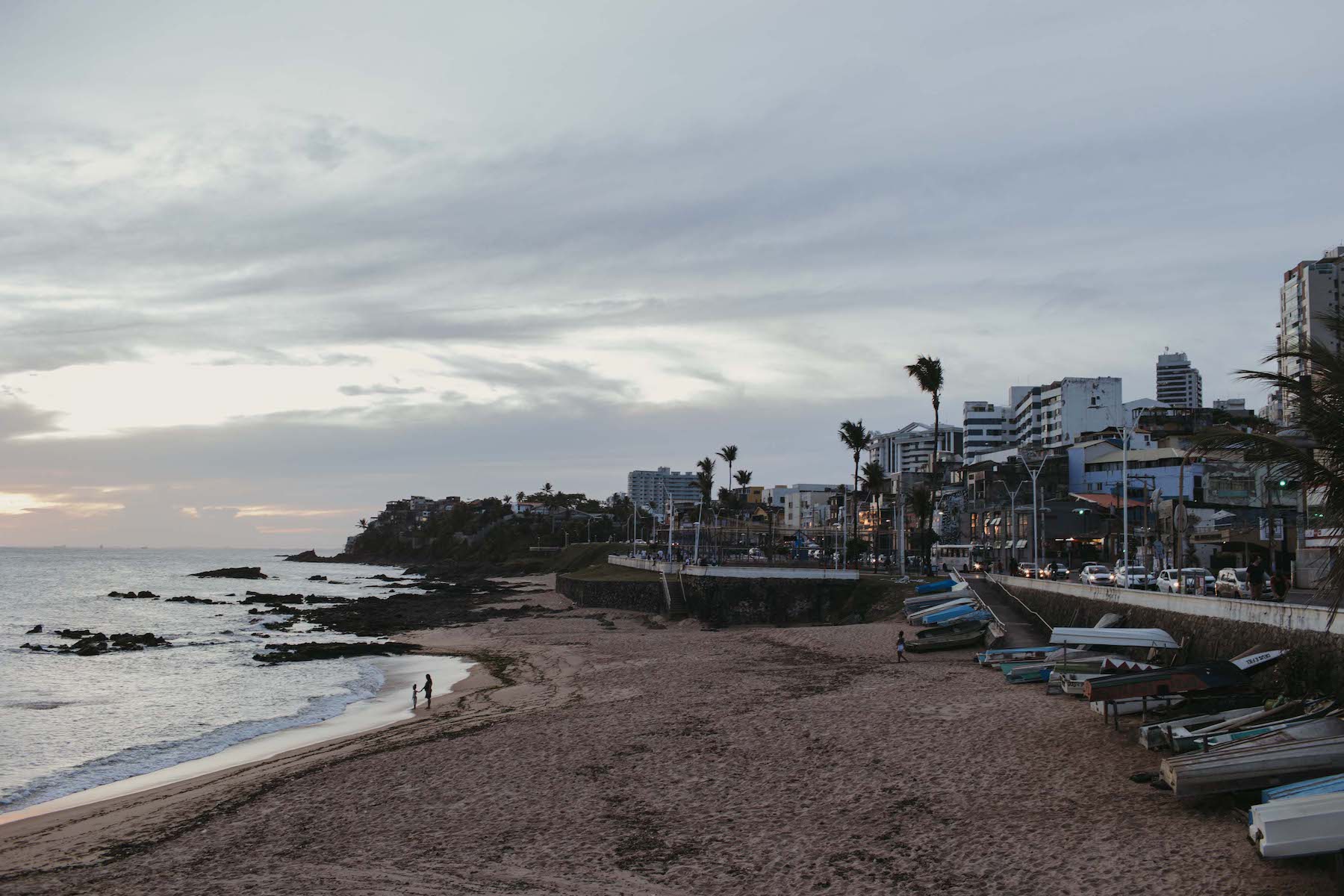 Photo: Taylla in Salvador for Flytographer. A photo of Rio Vermelho in Salvador, Brazil.

Another very charming area of Salvador is Ponta do Humaitá, sitting close to the Fort of Mont Serrat in the lower town. The area boasts pristine views of All Saints Bay and some incredible city views, too. However, it still feels relatively undiscovered by tourists.

“Ponta” means tip in Portuguese, and on the tip of a strip of land, you’ll find a small complex with a church, a convent, and a lighthouse surrounded by water on three sides. The view is rather dramatic when the tide is high because the base of the lighthouse is partially submerged. The small Fort of Mont Serrat is beside it—a very picturesque, whitewashed building surrounded by palm trees. 🌴

You can go down to the Praia de Boa Viagem, a favourite beach with locals, and admire the monastery of Mont Serrat from the sand. This is a great spot to watch the sunset and take photos in Salvador. 🌅

Here’s a fun fact: the tiny lighthouse is nicknamed the Valentine Lighthouse. Locals believe many couples begin their relationships near it. With a view like that, and a warm breeze coming from the Atlantic, we can understand why. 💕 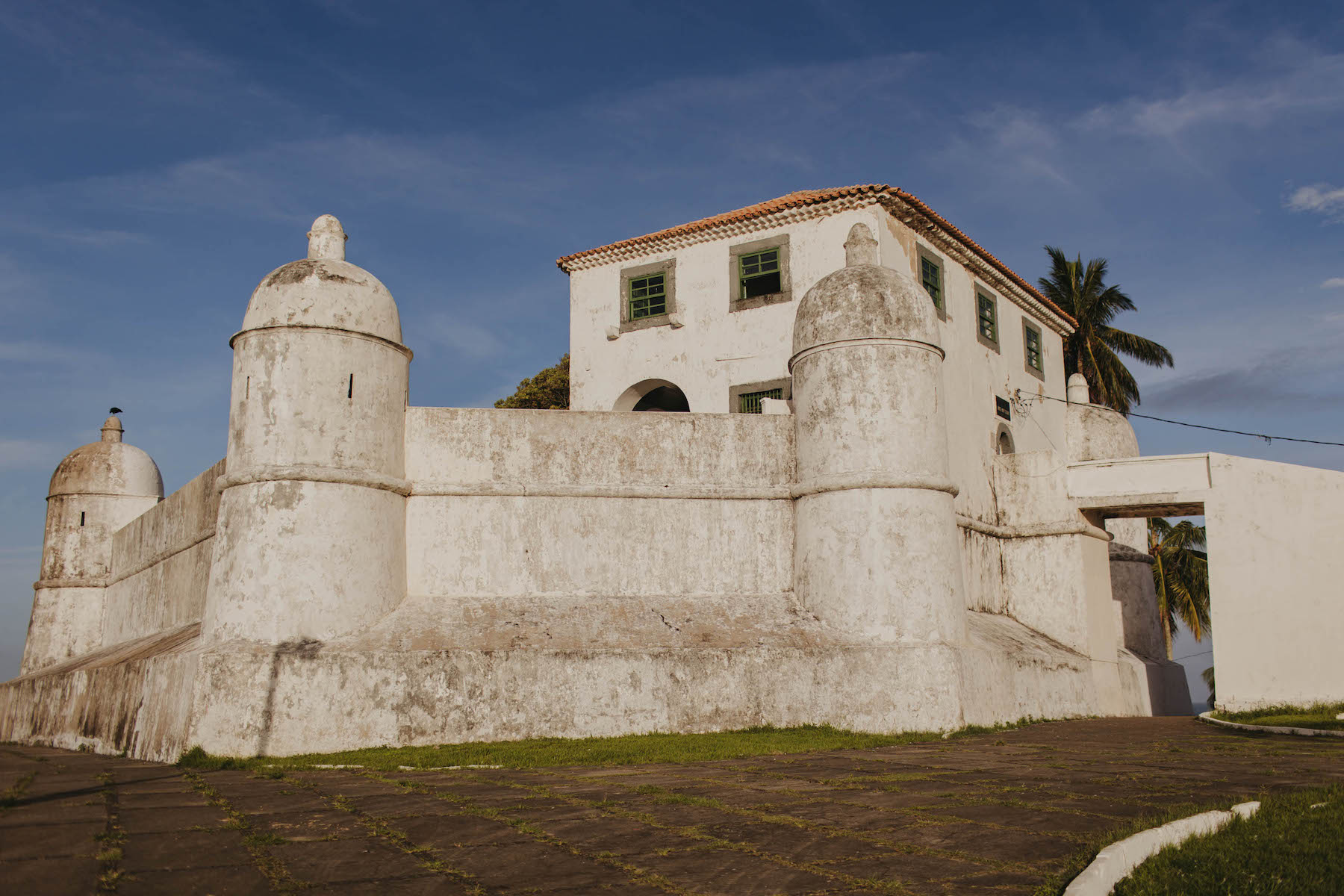 Photo: Taylla in Salvador for Flytographer. A photo of Ponta do Humaitá in Salvador, Brazil.

While in Bahia, why not head to a tropical Atlantic island? A day trip from Salvador, Morro de São Paulo is a fantastic, forested island with unspoiled beaches lined with palm trees. That’s also where you’ll find the charming ruins of a 17th-century fortress. The two-hour ferry leaves from Mercado Modelo.

To make the most of your trip to Salvador da Bahia, book one of our local Flytographers and let them capture your adventures in this bright, colourful, and historical city. 🇧🇷 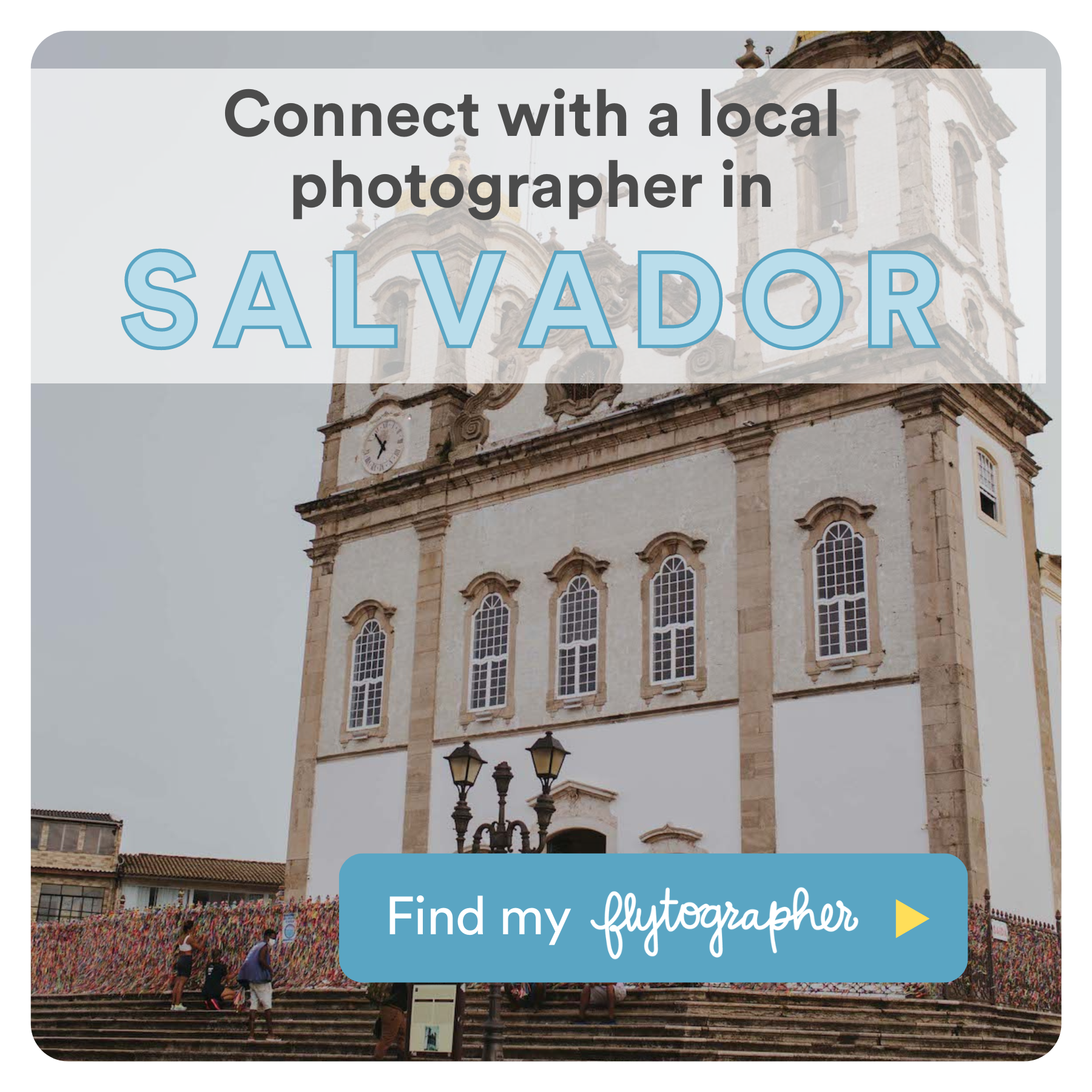